After almost 25 years of representing Zenith Aircraft Company, Roger Dubbert is one of the most recognized customer service individuals in the kit aircraft business. Like most of the people working for these relatively small producers of homebuilt aircraft designs, Dubbert wears many hats, shifting roles as needed among the flight line, front office, and shop. We recently visited with him at the Mexico, Missouri, plant, where the company has been producing Chris Heintz’s designs since 1992.

“I never know exactly what I’ll be doing when I come to work each day,” said Dubbert. “Last week we hosted a delegation of builders from Japan, who were looking at the STOL CH 701 kit as a way to fly in the highly restricted Japanese airspace.” While we were talking, he took time to field questions from a builder, a kit buyer, and various Zenith employees.

Zenith president Sebastien Heintz (left) shares the cockpit with Roger Dubbert on a typical day of flying in the CH 650 demonstrator.

“I joined Zenith in 1993, right after I had graduated from Central Missouri State University [now the University of Central Missouri] with my degree in aviation technology,” Dubbert related, “working in the small shop we occupied at the time.” Back then, he said, there was one drill press, one band saw and one bending brake, and the Zenith kits were largely unfinished metal sheets and parts. “Now we use CNC manufacturing extensively to make the kits, and they are much easier and quicker to build.”

A native of the local area and possessed of an aviation interest, Dubbert was a perfect fit for Zenith. Like most kit aircraft company employees, he filled in at various jobs, as needed. He built his own STOL CH 701 airplane in 1998, which has served as a venerable demonstrator as the company’s offerings have grown. At this point, it has 2000 hours of demonstration time on its airframe, and it continues to be used as a factory demo plane, in part to showcase the durability of the “Sky Jeep,” as it is often called. 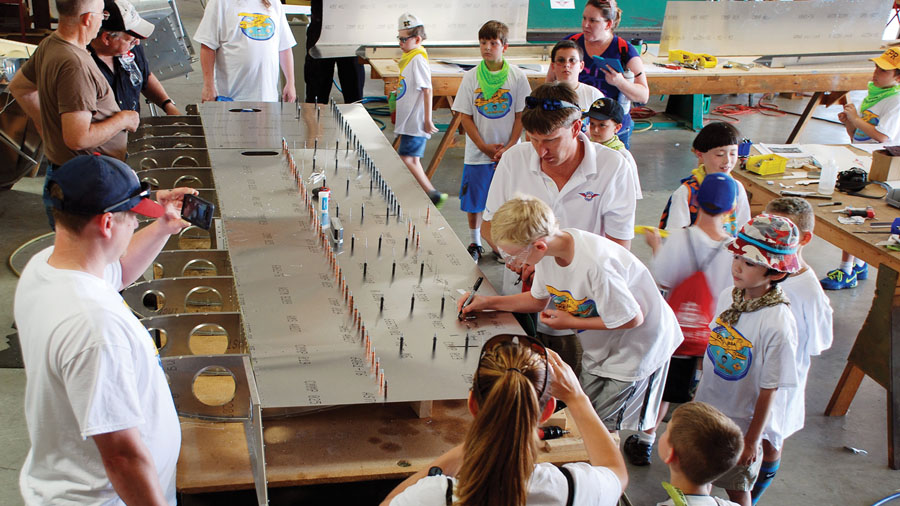 Dubbert’s flying is largely oriented toward familiarization flights with prospective builders and providing some transition training. Although not a CFI, he is intimately acquainted with the right-hand seat, having given an estimated 10,000 demo flights over the years. Dubbert still enjoys taking enthusiasts up on demo flights and showing them the capabilities of the various Zenith designs. He has performed first flights of newly completed planes as well. Dubbert was officially recognized last year at the company’s 25th annual Open Hangar Days celebration for his 10,000th demo flight.

Some of his more interesting flights involved checking out EAA employees at Oshkosh so they could fly the CH 750 Cruzer, including famed copilot Jeff Skiles, who did the first flight of the One Week Wonder airplane that was built during AirVenture 2014. He also flew with Kazakhstan cosmonaut Toktar Aubakirov, who was hired to evaluate using a Zenith STOL CH 801 for agricultural applications (crop spraying) in his home country.

These factory demo planes are just a few of the many Zenith aircraft Dubbert has flown since joining the company in 1993.

Asked about the changes he had seen during a quarter century in the kit aircraft industry, Dubbert said the level of completion and maturity of today’s kits is a giant leap ahead of where he began. Today’s kits are much more advanced, requiring fewer tools, skills, and time to successfully put together. This has made aircraft homebuilding accessible and feasible to a wider audience. Today’s builders often have no prior aviation or mechanical experience.

In the early times of ferrying planes to airshows, it wasn’t unusual for a minor malfunction forward of the firewall, involving something like an exhaust or a bracket, to require an unplanned stop for repairs. Reliability has increased to the point that today’s trips are routine, making them a lot less “experimental,” thanks to product development and better quality components, especially modern engines and accessories.

While Zenith still sells plans and parts to support scratch building, the great majority of its business is made up of supplying kits (prebuilt parts and components), allowing builders to get into the air quickly. Matched-hole assembly and CNC-produced parts make the job of putting an airplane together much easier than in the old days, and available quickbuild kits jump-start the building process. 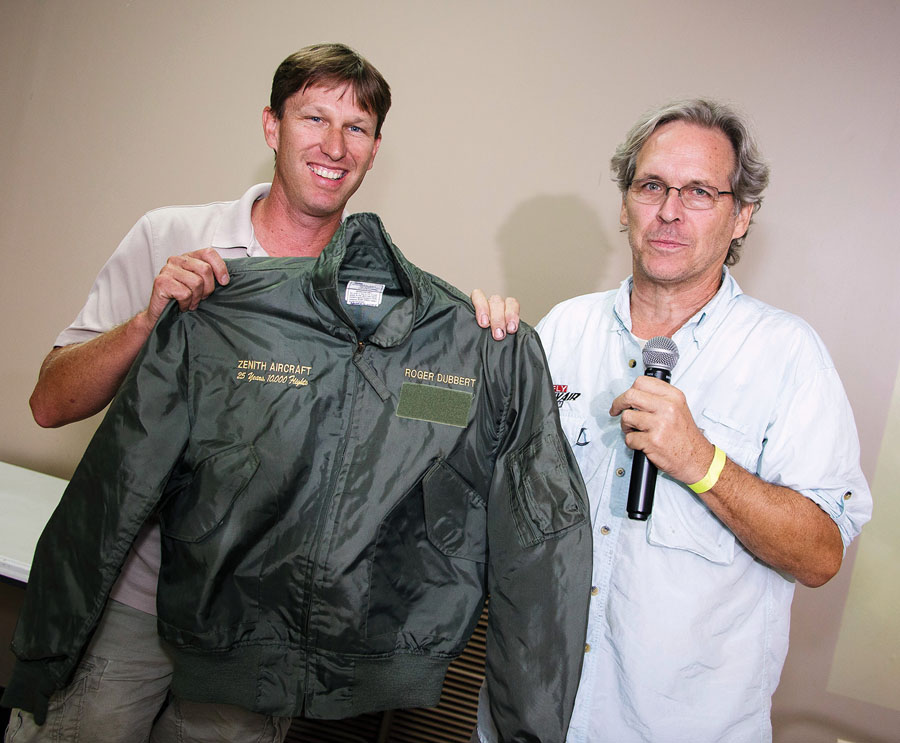 To celebrate having flown over 10,000 demo flights, William Wynne of FlyCorvair (right) presented a flight jacket to Roger.

While the number of customers served by Zenith continues to increase, the volume of technical support questions doesn’t seem to have increased, mainly because of more detailed assembly instructions and drawings (blueprints), and a higher quality kit, despite the fact that kit manufacturers now reach a broader spectrum of the population (also known as inexperienced first-time builders). “We invite and encourage all our customers, especially first-time builders, to call if and when they have questions,” explains Dubbert. These inquiries help the company develop more detailed assembly manuals, in turn leading to fewer repeat questions. 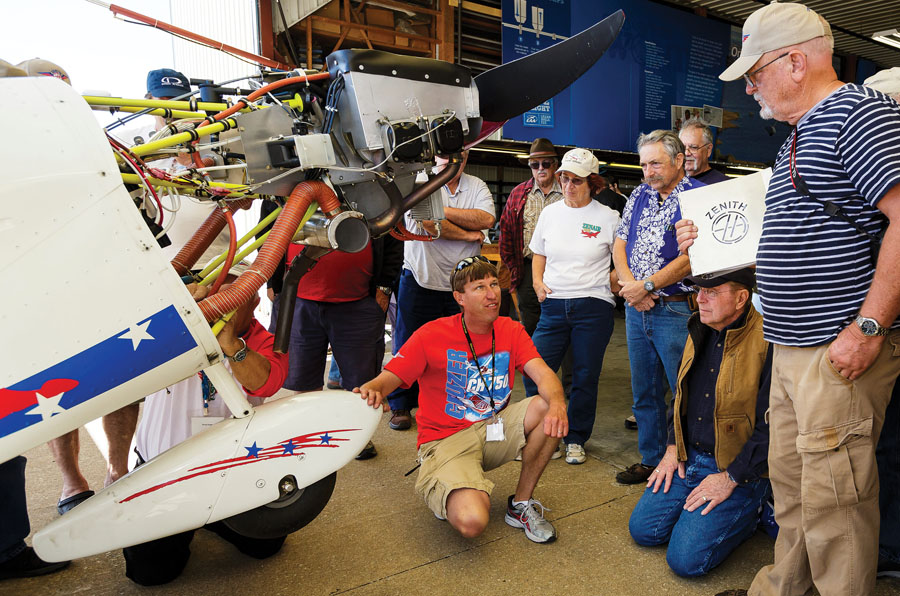 Zenith ships an average of one kit per workday, so the phone calls and factory visits keep coming. With Zenith president Sebastien Heintz, Dubbert also co-leads the monthly workshops at the Zenith factory, guiding first-time kit builders in the assembly of their own rudder tail kit, helping them understand the blueprints and instructions, the tools and materials, and showing them how to assemble their very first airplane component. While at the factory for the workshop, every willing participant is taken up for a demo flight by Dubbert. “My relationship with our customers really only starts with the demo flight and the kit sale,” explains Dubbert. “I look forward to continuing to work with customers as they complete their Zeniths and start flying their new creations.” 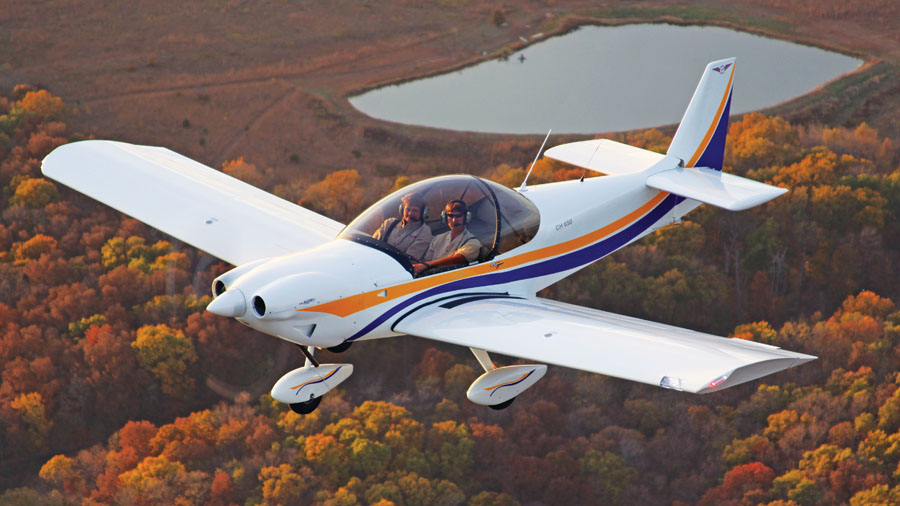 Dubbert also maintains the fleet of Zenith demonstrator aircraft, currently made up of a Zenith CH 650, a STOL CH 750 and CH 750 Cruzer and his STOL CH 701 (as well as the new SAM-EX aircraft). Not only building but also maintaining the aircraft gives Dubbert the knowledge and experience to professionally support the growing number of Zenith builders and owners.

Dubbert flies his personal Luscombe 8A in his spare time, as a change of pace, and recently transitioned into the SAM-EX retro kit design Zenith has added to its line. His varied duties will continue, as he enjoys working in a constantly changing industry.

In talking with Adam Burch, factory pilot and marketing person for Van’s Aircraft in Oregon, we had the impression he felt extremely lucky to have gotten a job with Van’s, doing exactly what he wanted to do—drawing and flying airplanes. A graduate of the University of Northern Colorado, Burch joined Van’s in 2011, after a stint at Adam Aircraft (no relation) in Denver. A self-self-taught CAD user, he’s also an extremely talented digital artist. His work can be seen and purchased online at http://tinyurl.com/h6pwyqc. You’ll be amazed at his abilities. 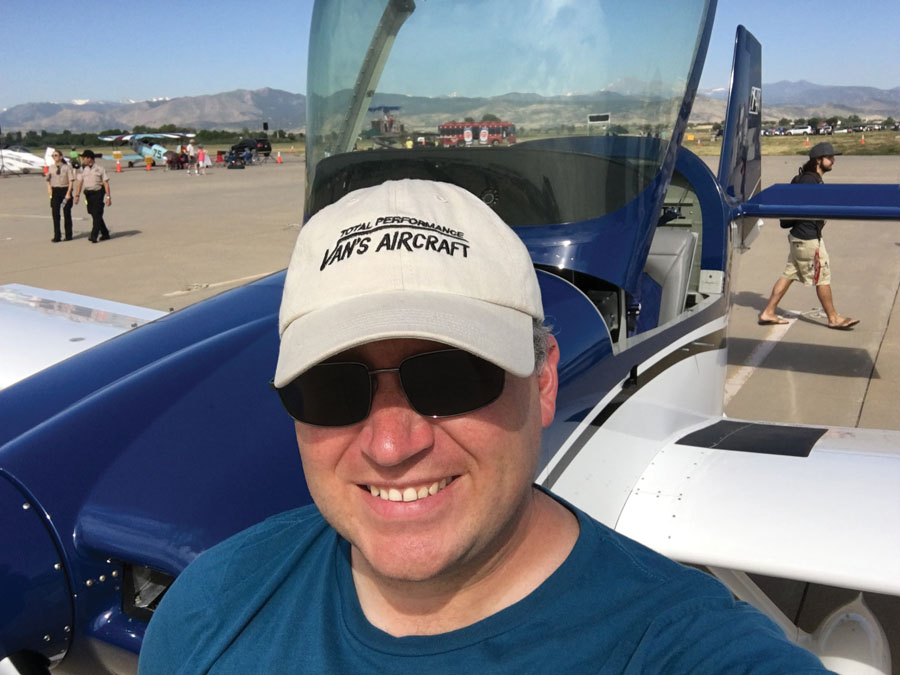 Adam Burch and the RV-14A prototype. A talented digital artist, he created the image below using Modo 3D modeling software and Adobe Photoshop.

Burch’s roles at Van’s have varied from drafting to engineering to flight test to marketing. “As a small company,” he says, “we have to step in wherever we’re needed, and we all wear many hats.” As he puts it, he just said “yes” to everything he was asked to do, and he showed a willingness to adapt to different positions in the company. So, with his Private Pilot license already in hand, he was checked out in N666RV, the venerable company RV-6A, under the tutelage of Mike Seager. Burch also learned a lot from the late Joe Blank, to whom he owes a huge debt. His latest flight review was accomplished in the RV-14A; he was only the 6th pilot to get to fly it.

Burch now has 750 hours, of which 550 have been accumulated at Van’s, where he helps with relatively simple flight testing of engineering changes, like flying speed boxes or checking oil cooler mods. Half of Van’s small engineering section is made up of pilots; nobody is just a pilot, he stresses. Because Burch is able to talk in non-technical terms with interested persons, he also took over some marketing tasks, allowing him to attend airshows with Van’s and answer questions from curious buyers and builders.

Burch has also gotten to ferry airplanes back and forth to the shows, and he’s grateful for the no-pressure company flying policy at Van’s, which he terms “the most ethical company he knows.” If the weather is uncomfortable, he reports, Van’s employees are under no pressure to keep pushing on; they’re told to just sit down and wait it out, however long it takes. Van’s is a very safety conscious company, he says.

Another thing Burch loves about working for Van’s is that it gives him a chance to help “make flying achievable,” which just so happens to be the Van’s motto.

When company pilot Joe Norris joined Sonex Aircraft in early 2013, he was tasked with setting up the T-Flight in-house transition training program for individuals wanting to fly a Sonex airplane for the first time. Sonex is probably the only kit manufacturer offering its own transition program, rather than supporting training through outside contractors. To do this requires a LODA (letter of deviation authority) from the FAA, since the Experimental/Amateur-Built regulations prohibit flight training, but Norris succeeded in obtaining such authorization, and over 200 pilots have participated since 2013. 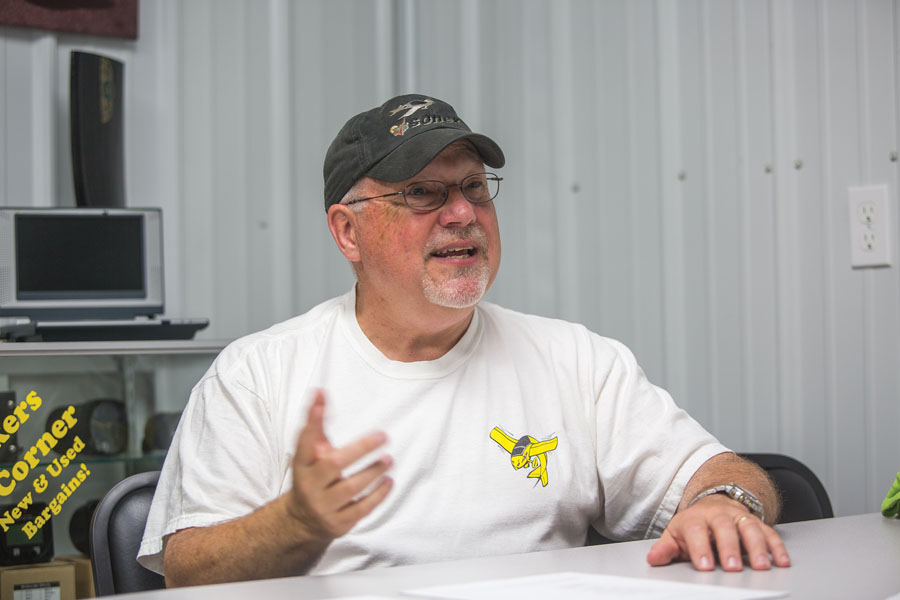 Who utilizes T-Flight? Norris says there are three categories of individuals participating in the program. Primarily, T-Flight is a flight and ground training program for Sonex builders who are about to complete their project and make the first flight, but have no experience flying a Sonex. The goal is to make them comfortable with the airplane before they make that first flight and to satisfy any insurance requirements. Other transition-training customers include buyers of a used Sonex and persons who are interested in building a Sonex but want to take a half-hour of dual to see what the airplane is like before committing.

Norris previously worked for the EAA in Oshkosh, Wisconsin, right across the airport from Sonex, and he holds CFI ratings for both airplanes and helicopters, as well as being an A&P with Inspection Authorization. His duties are, like most employees at kit aircraft companies, very flexible; he runs the T-Flight transition-training program, he answers technical questions about engines, and he does flight testing in the piston-powered Sonex airplanes. Recently, he’s been busy expanding the flight envelope with the new B-model versions of the Sonex line, which offer increased cockpit room and panel space. He reports that no deterioration of performance has thus far been found with the bigger airframe. 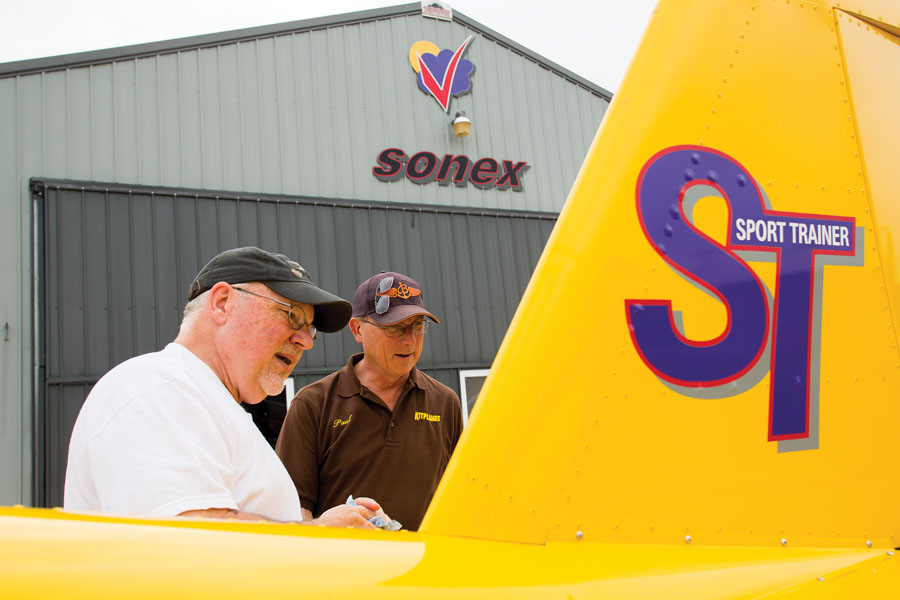 Growing up on a farm, Norris naturally gravitated to technical skills like welding and fabrication, and he worked for a time with a helicopter operator, where he honed his rotor-flying skills. He still helps EAA with the vintage Bell 47 helicopters seen flying over AirVenture, and he is a board member at the Vintage Aircraft Association.

His homebuilt aircraft background included building a Sonerai II, so it was natural for him to gravitate toward the later Sonex airplanes. He never knows what the day will bring in his multiple roles at Sonex Aircraft, but if there’s T-Flight training on the schedule, he knows he’ll be flying.

Update: After this story was written, it was announced that Joe has returned to EAA as flight training manager for the organization’s Sport Pilot Academy program.