Rotax surprised the heck out of industry watchers and light-homebuilt enthusiasts in early March with its announcement of the 912iS. Using the proven core of the 912S, a staple of the production LSA market and a favorite of kitbuilts needing 100 horsepower in a lightweight package, the iS adds something a few of us figured Rotax would never embrace: fuel injection. At the Sebring show in January, I stood in the Lockwood/Rotax tent and watched Rotax master Dean Vogel field questions from customers, including, “When is Rotax going to get rid of these carbs?” Vogel’s stock response: Two palms up and, “When we know, you’ll know.” 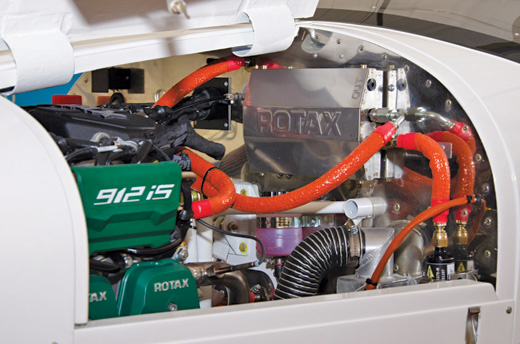 Rotax’s shiny new 912iS debuts fuel injection developed by the factory for the popular opposed-four powerplants; better yet, it’s a sophisticated electronic system.

Now we know. We know a lot, actually, because AVweb columnist (and KITPLANES® contributor) Paul Bertorelli was in Austria for the press launch of the new engine. He’s preparing an in-depth story on the development of the new product to appear in an upcoming issue of this magazine, so I won’t steal too much of his thunder.

The “March surprise” had additional impact because so few saw it coming, at least not as quickly as it did. In the industry, it was expected that Rotax would soldier on much longer with the pair of Bing carburetors. Even as customers voiced their desire for more advanced systems and the aftermarket responded with both mechanical and electronic injection systems, the factory remained silent. Clearly, the Rotax engineers were watching and listening. What is that old saying about the smartest man in the meeting being the one who talks the least?

I tried to look at the 912 situation from Rotax’s perspective. Even as the aviation industry nearly collapsed in late 2008 and through 2009, the company’s sales remained reasonably good, pushed by demand in ready-to-fly LSAs, a number of homebuilts, defense work (the 914 is a popular drone engine) and other avenues. The market seemed to love the 912 in all of its iterations, so where was the need to push through expensive, time-consuming development of fuel injection? Especially when you consider that this one detail—carburetors in place of a more modern induction system—was something buyers were apparently more than willing to accept because the rest of the package was so good.

And yet the motivation appeared, as Rotax states, to improve the engine’s efficiency and reduce its carbon footprint. The company hasn’t, and probably won’t, suggest that competition forced its hand; that’s not the Rotax way. But you have to conclude that the development of the EFI (electronic fuel injection) system, or at least the timing of it, had something to do with both the aftermarket attention the 912 has received and the emergence of similar engines such as the UL Power series, which entered the market with electronic injection and ignition, and is offered no other way. 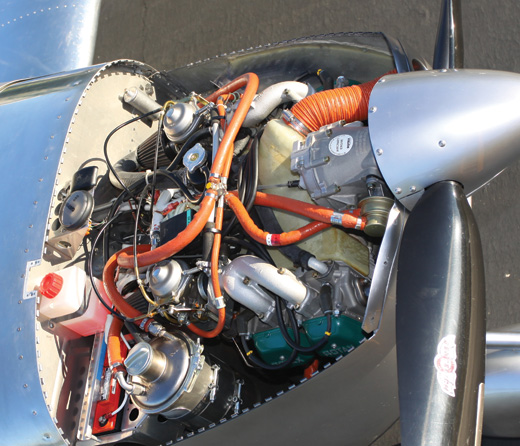 Thousands of pilots have come to love the Rotax 912 for its durability and ease of operation. But the carburetors have been a source of irritation for some.

The ultimate goal of the engineers responsible for engine mapping—the generic term that describes a combination of fuel/air ratios and ignition timing as applied to electronic controls—is efficiency at every plot point. That’s a lot of territory—from ease of initial start, hot and cold, all the way to maximum power with suitable detonation margins and then back down the chart to efficient cruise figures with mixtures lean enough to boost economy.

For their part, the twin Bing carburetors that have been a fixture on the 912 and 914 engines have done a workmanlike job. Familiar to BMW motorcycle owners, these carbs are unlike most found in traditional aircraft applications because of what’s called a constant-vacuum (or constant-velocity) slide. This piece is a restriction in the throat of the carburetor, a guillotine-like slide that is connected to a vacuum chamber at the top of the carb. As airflow increases through the carb, a vacuum is formed above the slide diaphragm, which draws the slide upward. This movement opens the throat of the carb but also helps control the amount of fuel delivered. You see, the slide also has a tapered needle extending from its lower edge; the needle penetrates the main jet assembly. As the lift rises and the needle pulls out of the jet, the taper allows more of the main-jet area to be exposed.

In theory, changes in altitude should be compensated for by the slide mechanism. As manifold pressure drops, the norm as you climb, the slide should gradually descend into the main jet, leaning the mixture. In the general sense, this scheme works. Once properly set up (there are variables for season and airframe installations), a 912 will have acceptable mixtures at low altitude and high power, and at high altitude and low power. Acceptable, but not ideal. What’s more, there is no way for pilots to trim the mixture settings from the cockpit. Instead, they watch the exhaust-gas temperatures (EGT) drop during the climb to altitude, knowing they’re leaving a few percentage points of efficiency at the feet of simplicity. 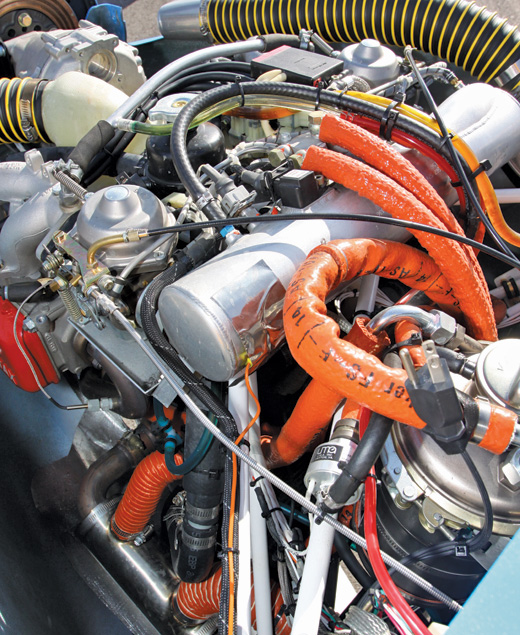 When you add turbo plumbing to a turbocharged installation, as Rotax did with the 115-hp 914, you get a real nest of snakes under the cowling.

Rotax has taken a very sophisticated approach with the 912iS. The injection system—incorrectly referred to as “direct injection,” in some of the early press—places two standard low-pressure fuel injectors at each intake port, managed by dual redundant engine control units. (Today’s common meaning for “direct injection” refers to very high-pressure systems used in modern cars that injects the fuel directly into the combustion chamber. Such technology allows very high compression ratios that in turn boost power output and fuel efficiency.) Rotax has included the capability of using knock sensors but hasn’t enabled that feature yet. Historically, knock sensors have been considered a difficult fit for aircraft engines because the large-displacement, loose-clearance devices were simply too mechanically noisy for the piezoelectric sensors to discern detonation from “the normal noises in here.” Lycoming has been working the sensors and the algorithms that read their outputs in the IE2 program, and now Rotax has the capability in the 912iS.

Knock sensors and, to some extent, oxygen sensors are enabling technology for high-performance automotive applications. Between them, it’s possible to create a base map for the fuel injection and ignition timing that gets you close to optimum (either power or efficiency, depending on where in the power band the engine operates at any given time), and then use the knock and oxygen sensors to fine-tune the map as the engine is running. Typically, oxygen sensors are used to search for a stoichiometric fuel/air ratio (the theoretical idea), which is something you’d want to achieve the best partial-power economy, where knock sensors allow you to advance the ignition timing and trim fuel flow at high power to keep the engine just clear of destructive detonation. (Traditional aircraft engines, bereft of these aids, are simply set up with very conservative ignition timing and very rich high-power fuel mixtures, in a belt-and-suspenders way of preventing detonation.)

At this point, the 912iS looks to be close to a drop-in fit for existing airframes; the engine mount is the same and the location of the major components carries over from the 912 and 912S. The main issues for kit makers and enterprising builders looks to be the fuel system, which requires a return line back to the tank(s), and finding the real estate to mount the Rotax ECU. Then there will be changes to the electrical system to accommodate the new split generators (capable of 30 and 16 amps, respectively) and a bevy of new switches in the cockpit. Not insurmountable challenges, surely, but ones that are resolved only for the myriad European launch customers for the engine.

As fuel prices continue to rise and the expectation that we’ll have a steady supply of 100-octane fuel remains tentative at best, the demand for an efficient, multi-fuel-capable engine will only increase. Any objections to the increased complexity of the 912iS will, I think, be largely overcome by the engine’s operational flexibility. It’s a mere 13 pounds heavier than the 912S, which will probably become more when you factor the additional complexity of the wiring and plumbing these new systems require. Rotax is not offering hard pricing at the moment, saying only that the engine will be less than 20% more than the current 912S.

So rather than say “it’s about time” we got electronic controls for the 912, I’ll say that now is simply the right time for them.

Rick Lindstrom - March 10, 2008
0
Aspen Avionics AT300 is designed to be a drop-in replacement for a vertical speed indicator, but you'll get a lot more usable information in the cockpit when you couple it to your GPS; by Rick Lindstrom.