After the noise stopped and I felt the airplane come to rest, I opened my eyes to evaluate my situation. My profound sense of relief that I was no longer in an uncontrollable airplane was matched by intense curiosity about my new situation. The tinted canopy was gone, as well as my tinted helmet visor, and the suddenly bright afternoon sun lit up the debris in the air around my head. I had two thoughts in quick succession. First, I knew I had just hit my head really hard, and I worried about my neck and spine. Secondly, I knew I was sitting on a half-full fuel tank and enough batteries to start a fire. The mental image of my once neat wiring tightly wound red around black was almost as concerning as a similar image of the wiring in my neck. It was the first time I had considered these two terrifically opposed motivations—get out of the fire hazard or sit still and wait for the paramedics. This trade is magnified the farther from emergency response you are. I remember thinking to myself, this isn’t Reno where the fire response is on you in less than a minute. How long will it be before the paramedics arrive or the fire starts? 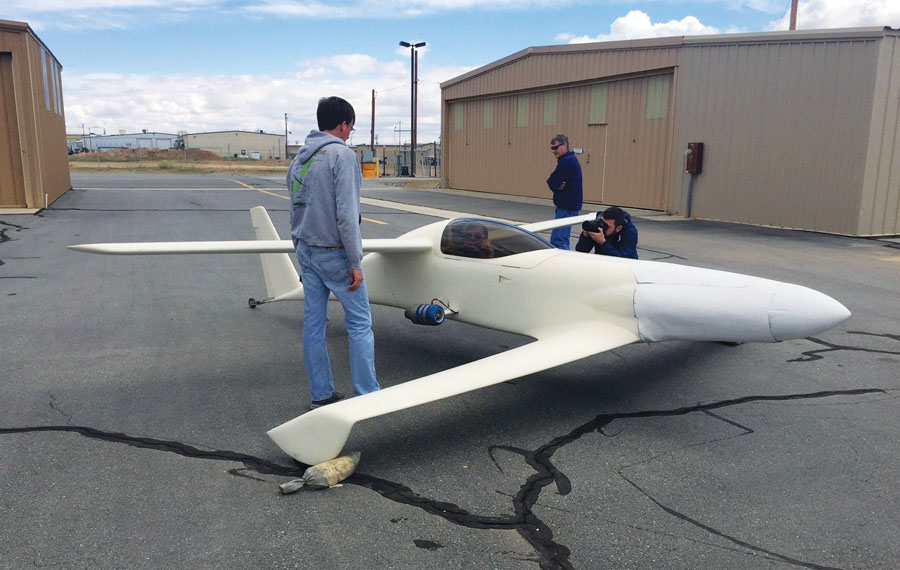 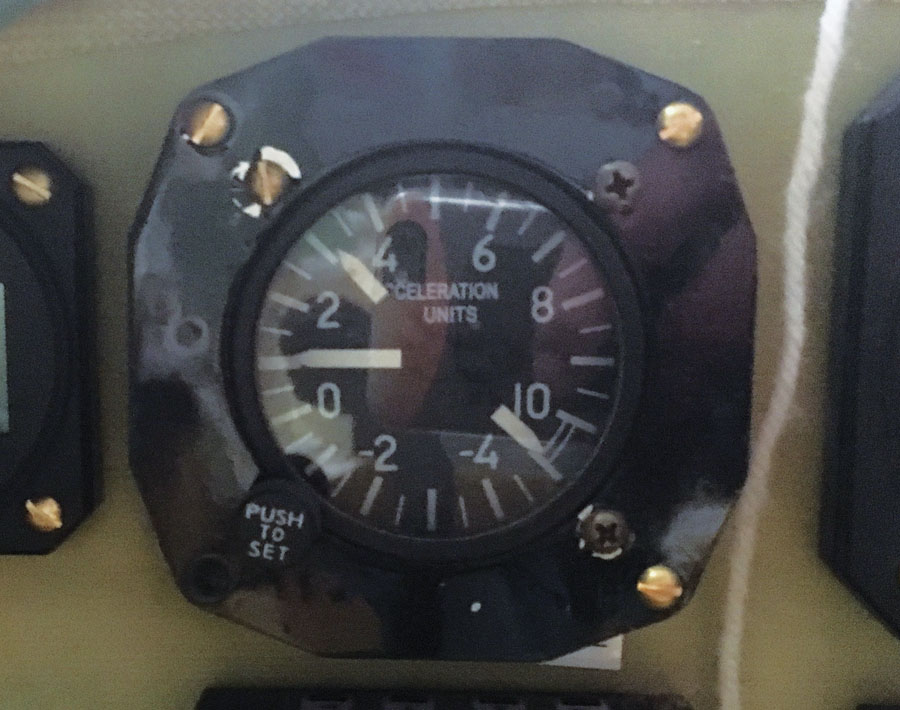 I asked a doctor friend who also happens to be a pilot and former AME about this topic. Dr. Jenni Huldin referred me to a couple of documents that I found very helpful. Dr. Joseph Ferko pulled together a document called “Crash Site Medicine Advanced” that is available at www.FAA.gov. The PowerPoint presentation had some interesting statistics on small airplane crashes. Between 1983-88 there were 888 small airplane crashes, 17% of which resulted in fire. Of those fires only 17% started after the vehicle came to a rest. Therefore, in my situation, if you assume I was conscious enough when I opened my eyes to detect a fire nearby, then there was a 4% chance that the fire would start after I had come to a rest. If one assumes I was dazed by the crash and wouldn’t have noticed whether the fire was already burning, then there was a 17% chance that a fire would be present now or later, roughly one in five. 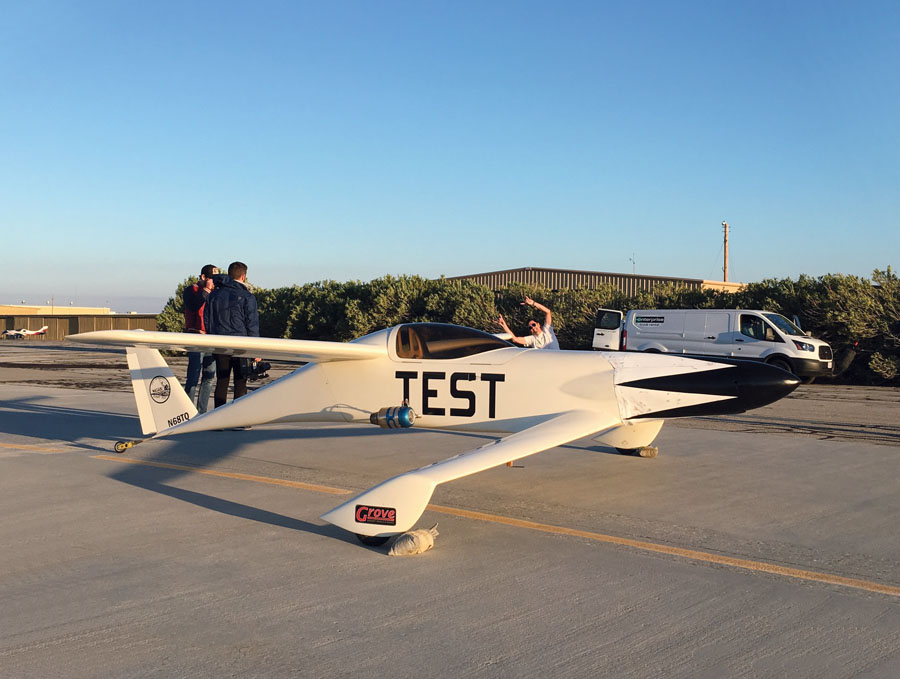 The final configuration of the Twerp at Mojave.

Dr. Ferko’s document also has data on types of injuries. Between 1980 and 1990, 22% of small aircraft fatalities were caused by head injury. Not exactly the data point I was looking for, but close. I dug into this some more and could not find evidence that spinal injury was statistically significant in small airplane crashes. What seems much more likely in my particular scenario were the risks associated with concussion. 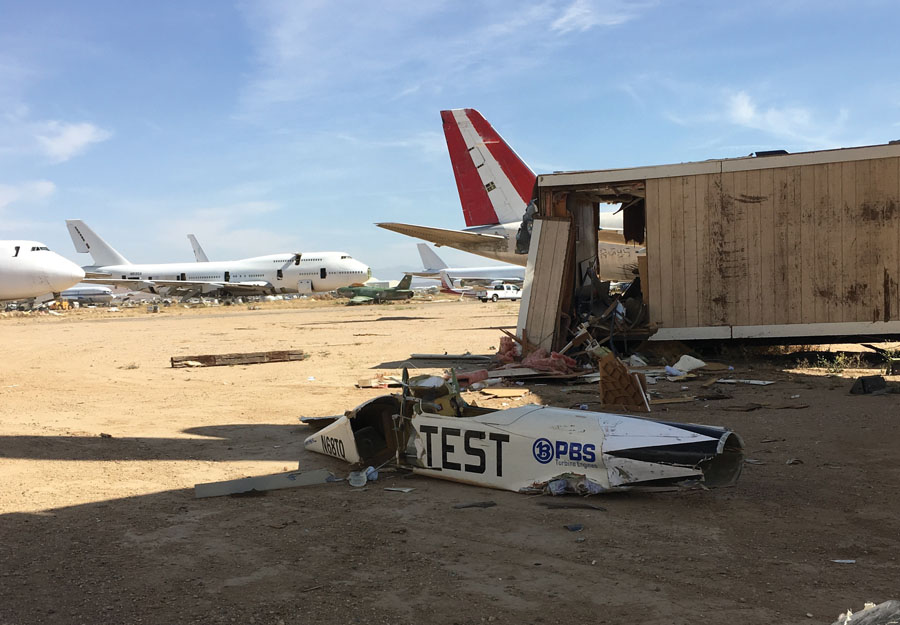 The Twerp crash site. Notice the damage to the canopy.

After a significant bump to the head, the brain starts to swell. This swelling leads to confusion, vision problems, and most relevant to this discussion, balance problems. Therefore, if I stood up I could, dazed and among the debris of the crash, trip and worsen my injuries. Without emergency responders on the scene, it could be tough for a pilot to evaluate how stunned they were, so this seems like very reasonable risk. I have also read about delayed loss of consciousness, where the pilot may be standing, pass out, and bump their already wounded brain a second time. Scary stuff. 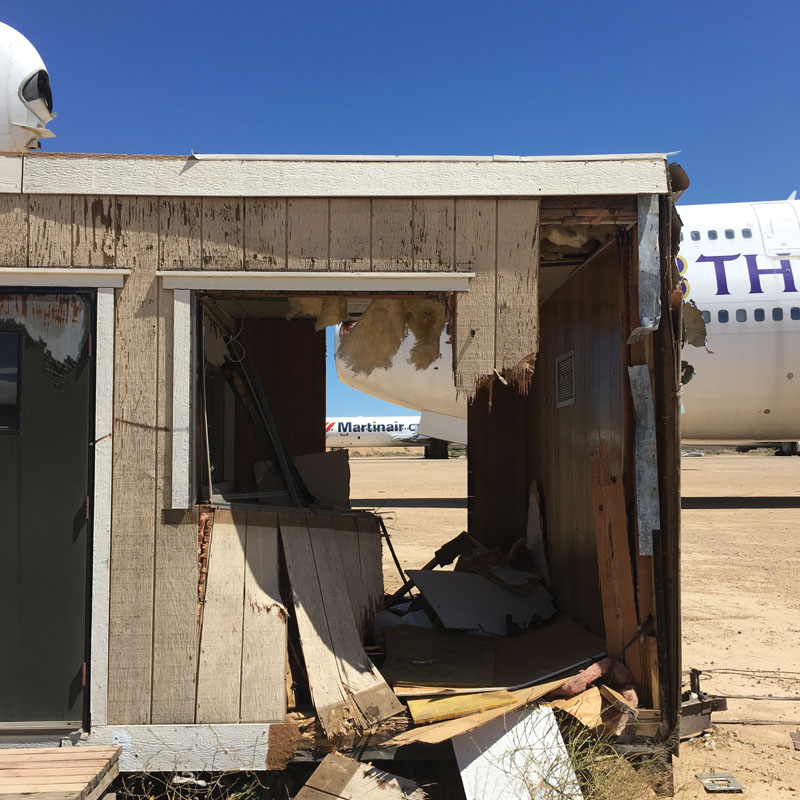 The window that saved the day.

Looking at all that data, the likelihood that the airplane you just crashed is or soon will be on fire is just below one in five. Similarly the chance that you will have a head injury is just over one in five. Therefore there isn’t a statistically significant reason to worry about one over the other. However, the risks associated with the head injury would be distinctly lowered if you did not remain standing any longer than necessary after removing yourself from the wreck. Therefore, my plan, should I encounter this situation again, is that if I have the ability to get out of the wreck, I will. Then I will sit down, despite all the adrenaline and pilot curiosity about the crash driving me to do the opposite. I am surprised looking back at how quickly I went from worrying about my injuries to wanting to look over the crash site. 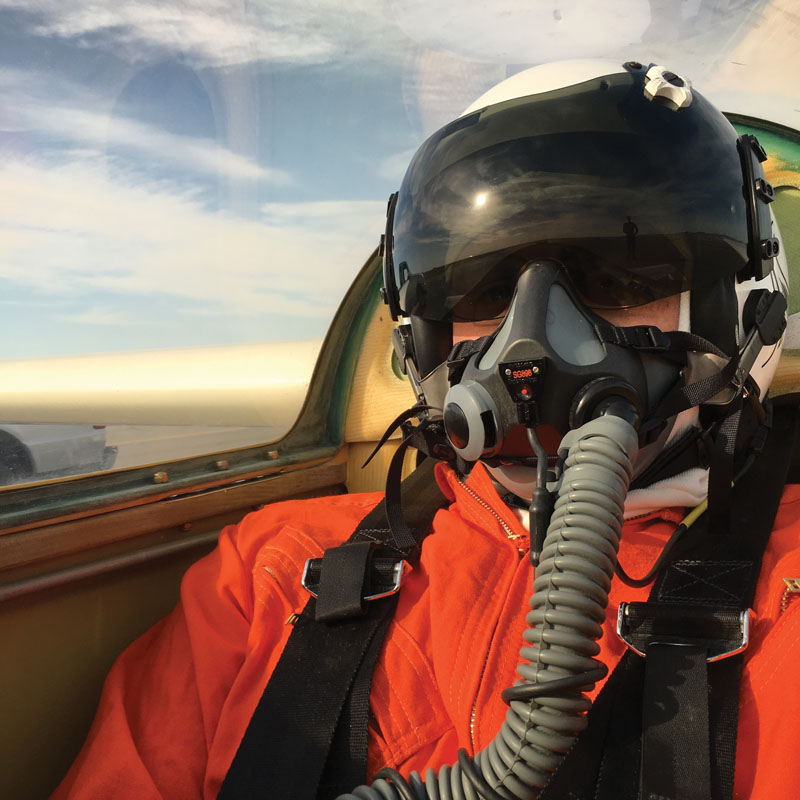 Elliot flying the Twerp. The helmet is an HGU-68 customized by Gibson & Barnes. 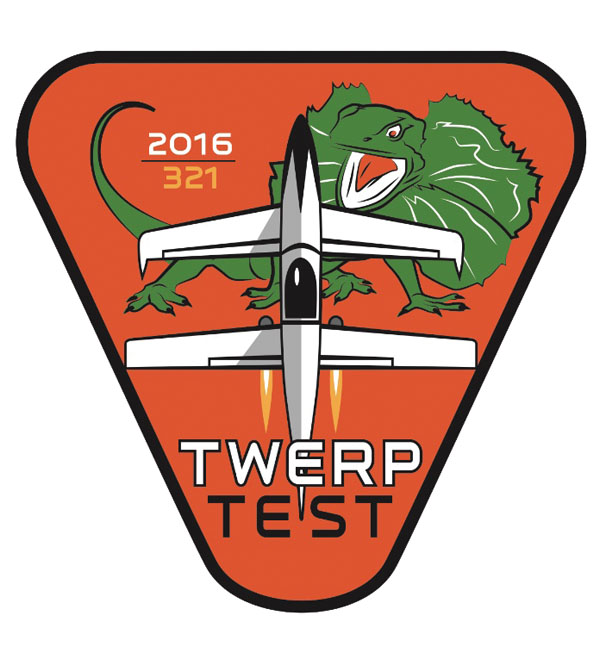 I want to take a second to talk about this behavioral phenomenon. Very quickly after the accident, I became fascinated with looking at the wreckage. It’s a very reasonable response. I had spent a lot of time developing the airplane and its systems. Before that I had spent 12 years trying to predict how aircraft systems and structures would behave in just this kind of situation. Suddenly all the associated interest in the subject was drawing me away from the paramedics to look at the wreckage. At this moment I was at incredible risk of having physical injuries that I didn’t know were there, but it literally took all the effort I had not to start digging through the wreckage. Now looking back on the incident, I have been able to spend much more time than I’d like looking at that wreckage, and there was no rush within minutes of the accident to be looking over the site.

This is important work that we do, cold and unforgiving but good. 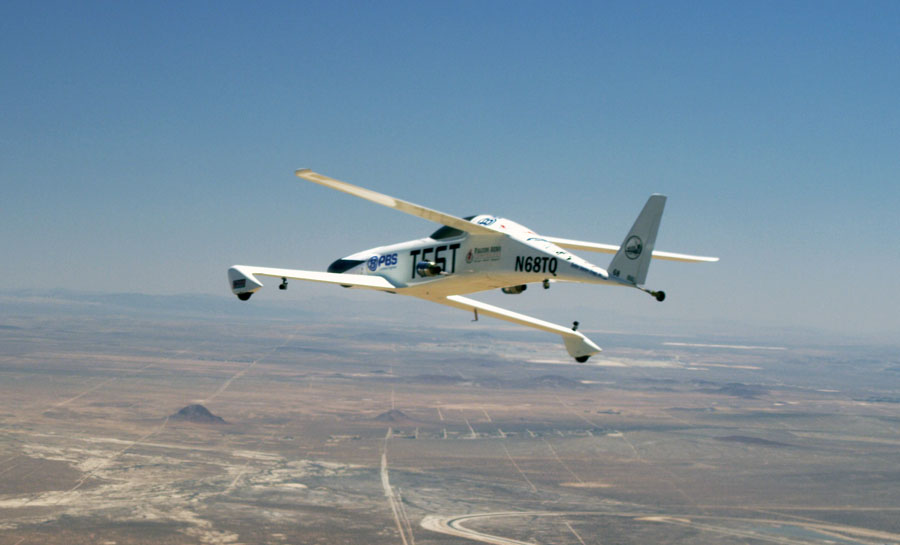 The Twerp on a test flight over Mojave. Note the twin PBS turbojet engines mounted to the sides of the fuselage below the canopy. (Photo: Justin Gillen)

What I Actually Did 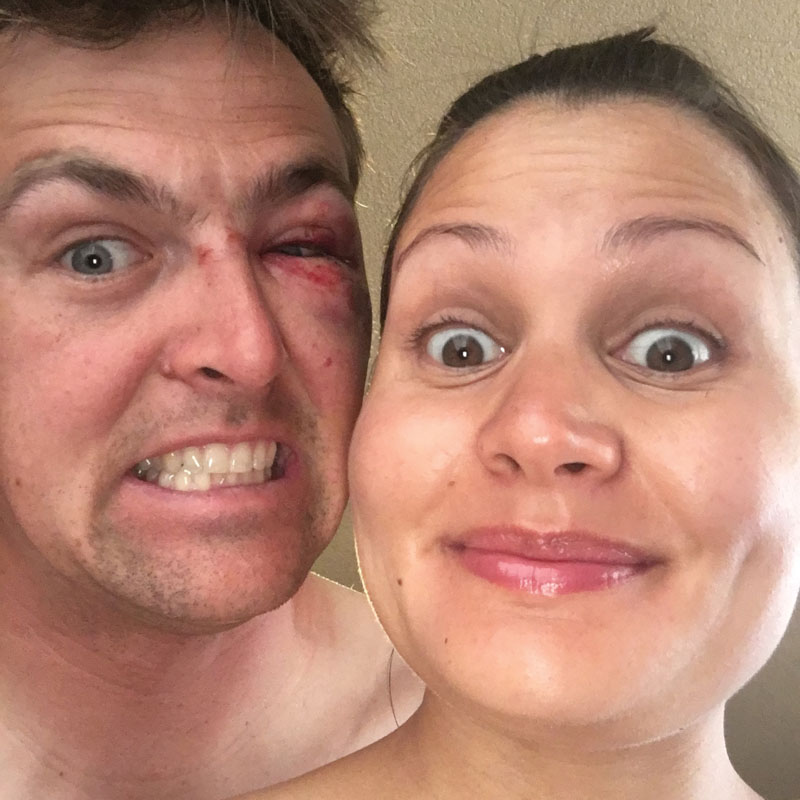 Sitting in my destroyed airplane, I looked around the cockpit to determine if my head was still attached to my body, a recurring nightmare not worth going into here. Trying not to move anything, especially my neck, I looked at my hands and legs and their position relative to my head. Things looked for the most part in place. I tried to convince myself to stay put in the wreck, but the combination of adrenaline and fire risk overwhelmed my will power. With my body parts looking more or less in place, I gently moved my neck feeling for crunching or whatever a broken neck might feel like. Then I checked my upper and lower back in a similar way. I picked up my arms and looked for blood soaking through my orange flightsuit. I had not considered until that moment how much easier it is to see blood in an orange flight suit than the traditional green flight suit. I moved my legs and confirmed they seemed to be responding as expected. At this point I decided to release my seatbelt and stand up through the missing canopy. I was walking around the site inspecting the wreckage when fellow Wasabi test pilot Justin Gillen came around the corner with the rest of the crew in the crash truck. Justin and everyone else I met in the next 15 minutes told me to sit down before I passed out. According to the video recorded by my cockpit camera, I didn’t lose consciousness during or after impact. The only significant injury we could find was a black eye likely from the second wall of the trailer I hit, after passing through the first wall opened my helmet visor. I cannot believe how lucky I was.

Kitplanes - January 19, 2008
0
This month, author Jim Weir lays the groundwork for a solar battery charger, complete with preliminary circuit board considerations drawn from a rats nest and details about how to order a pre-fabricated board.