Hectic just-in-time arrivals are a journalist’s way of life, but for once we arrived days early. Thanks to other, pre-Air Venture duties requiring heavy portage, we drove the 2,000 miles to Oshkosh this year, arriving in time to score a prime camping spot in Paul’s Woods in Camp Scholler. Unlike Paul Dye and his speedy RV-3, it definitely cost us more than a day enroute!

Like Editor-in-Chief Dye over in Homebuilt Camping, we witnessed the army of volunteers very busy with last minute preparations, especially at the fab shop and painting signs near the Red Barn. We were also on hand for the 65 mph dawn windstorm Saturday morning (“Red sky in morning, sailor take warning!”), but thanks to staking both the tent and the tarp over it, we survived better than the porta-potties. Also thanks to EAA for the rumored professional trimming of the trees in the woods—nothing more than twigs fell as the result of the violent, swirling winds.

More unexpected were some of the preparations by fellow campers. Being westerners where camping means scrub, sand and rocks, it was unexpected to see the EAA Radio folks mowing their section of Paul’s Woods with a John Deere apparently “volunteered” from the EAA’s extensive stable of green and yellow equipment. Pretty high-end camping in our book, but not unusual for Air Venture regulars as several other campsites in our vicinity got a buzz job from entrepreneurial locals.

Another perk of arriving early is visiting the very nice EAA Museum. We might observe the powerful air conditioning in this fine facility is a major draw to we humidity-soaked westerners, but the ability to inspect famous homebuilts—plus vintage and warbird aircraft—is obviously the larger draw. 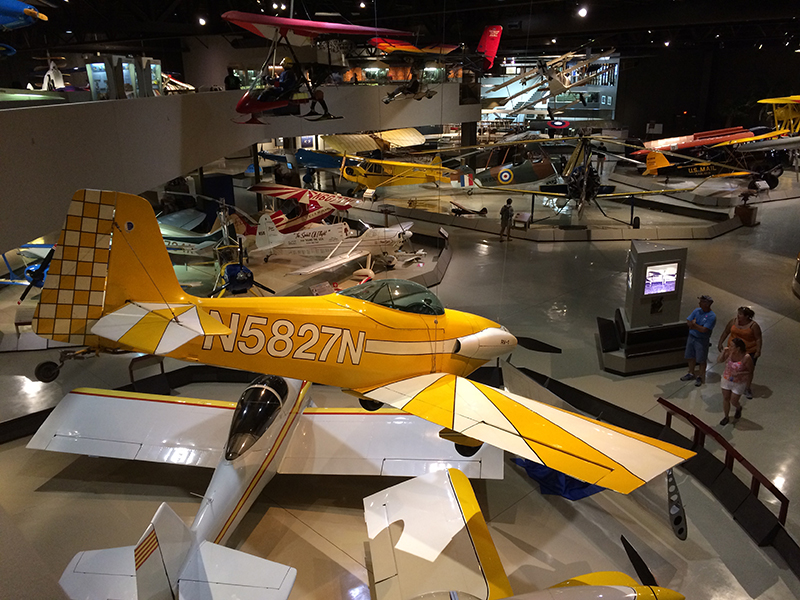