Battery and solar-powered flight is older than we think. Pioneers in the field, almost unknown today, need to be recognized for a vision still being fulfilled.

Frenchmen beat everyone to the electric aircraft—by almost a century. The Tissandier brothers, Albert and Gaston, managed a flight in a dirigible carrying three pilots, several heavy batteries and a Siemens motor on October 8, 1883, followed by their only other flight on September 26, 1884. Their history and abilities were strangely matched to this new endeavor. 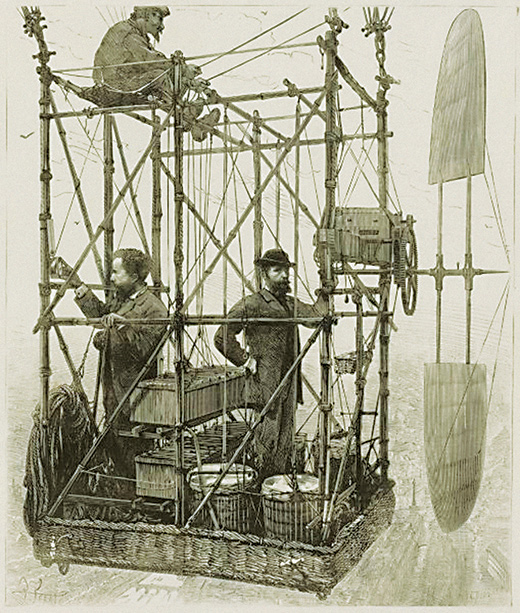 The Tissandiers are joined by an unidentified aeronaut, casually sitting without restraint atop the bamboo structure.

Gaston, an aviator, chemist and inventor, penned a book in 1871 that dealt with the Wonders of Water, including its potential use in geothermal wells (water “beneath the terrestrial epidermis” in his elegant phrase) for energy generation through abundant steam. He also demonstrated how hydrogen could be extracted from water, probably helpful in filling his balloon’s envelope.

Brother Albert had a more artistic side, illustrating their free balloon flights, such as a 400-mile, two-day journey from Paris to Arcachon. Another adventure in which Albert went aloft with two fellow aeronauts ended tragically for friends Joseph Croce-Spinelli and Theodore Sivel, and resulted in deafness for Albert. Their balloon topped 28,000 feet, and repeatedly passed the point where the trio lost consciousness. In their dazed state, they threw ballast overboard as the balloon dropped to a breathable altitude, causing the balloon to repeatedly shoot back to deadly altitudes. Only Albert had the presence of mind or good fortune to use the oxygen on board to save himself. 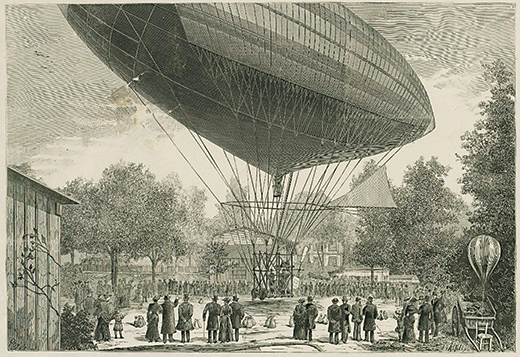 The Aerostat lifting off on its 1883 trek, the first electrically powered flight to carry human beings.

The need for greater control caused the Tissandiers to explore the idea of controlled flight. They started with a model dirigible, a cigar-shaped form, which could be directed and powered by a small electric motor. After successfully demonstrating this at an exposition, they built a full-scale version they called Aerostat, 165 feet long and 32 feet at its greatest diameter. Its low power, though, made it marginally controllable even in still air, and the two flights it made were its only ventures skyward.

The car, from which an unidentified crewman is shown dangling his legs in Albert’s illustration, was made from bamboo, apparently tied together.

Its Siemens motor reputedly put out about 1.1 kilowatts (1.5 hp), swung a huge, but probably inefficient propeller at 180 revolutions per minute through a reduction unit, and drew its current from large, cylindrical bichromate batteries. The 1062-cubic-meter (37,500-cubic-foot) balloon could manage 4.8 kilometers per hour (3 mph) on its limited power. 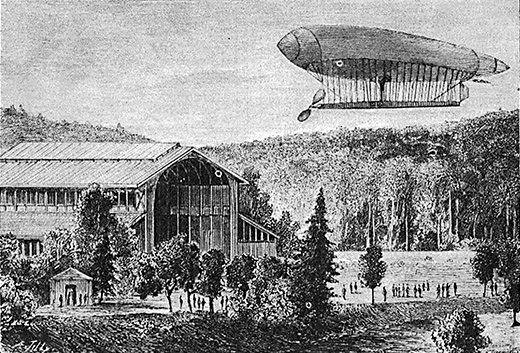 Their flight on August 8, 1884, covered 5 miles in about 23 minutes and was followed by six more, with five returning to their point of departure. Finding no further funding and unable to overcome the limitations of their batteries, the pair turned to other pursuits. Krebs became a naval architect and automobile designer, achieving several remarkable firsts in his new careers. Renard ended his career less happily. Although he had some success with his inventions, lack of funding for his creations and the rejection of membership in the French Academy of Sciences caused him to commit suicide in 1905. 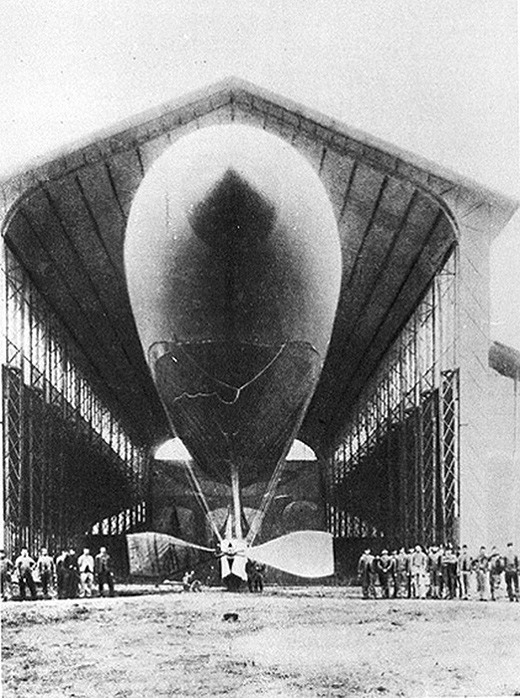 La France being pulled from Hangar “Y”, its 23-foot propeller quite prominent.

Jules Verne applauded them in Robur the Conqueror, his novel in which a more-or-less mad scientist tries to coerce the world into a peaceful state.

A History of Aeronautics, by E.
Charles Vivian, 1920

Airships Past and Present: Together With Chapters on the Use of Balloons in Connection With Meterology, Photography and Carrier Pigeons, by A. Hildenbrandt, Captain and Instructor in the Prussian Balloon Corps, 1908

Google Books has both of these titles online.

Verne described Robur’s more capable motive power on the Albatross, the bellicose peacemaker’s ship. “Robur had not availed himself of the vapor of water or other liquids, nor compressed air and other mechanical motion. He employed electricity, that agent which one day will be the soul of the industrial world. But he required no electro-motor to produce it. All he trusted to was piles and accumulators. What were the elements of these piles, and what were the acids he used, Robur only knew. And the construction of the accumulators was kept equally secret. Of what were their positive and negative plates? None can say.”

The Albatross lacked a balloon to sustain itself, twirling dozens of vertical propellers like ships’ screws to keep itself aloft and horizontal screws to pull itself backward and forward.

Although the Tissandiers gave up further aerostat design and construction, Gaston’s son Paul became a hot-air balloon pilot and a student pilot under Wilbur Wright and built early amphibious gliders. He became Treasurer of the Federation Aeronautique Internationale (FAI) in 1919 and secretary general of the organization from 1913 to 1945. As explained on the FAI web site, the Paul Tissandier Diploma was established by the FAI in 1952 and named for Paul Tissandier, secretary general. It was to be awarded to those who have served the cause of aviation in general, and sporting aviation specifically, by their work, initiative and devotion. Diplomas have been earned for outstanding achievements with model or real aircraft.

As we shall see in future chapters of this occasional series, models and full-size aircraft have had a profound effect in bringing us to the present state of the art.