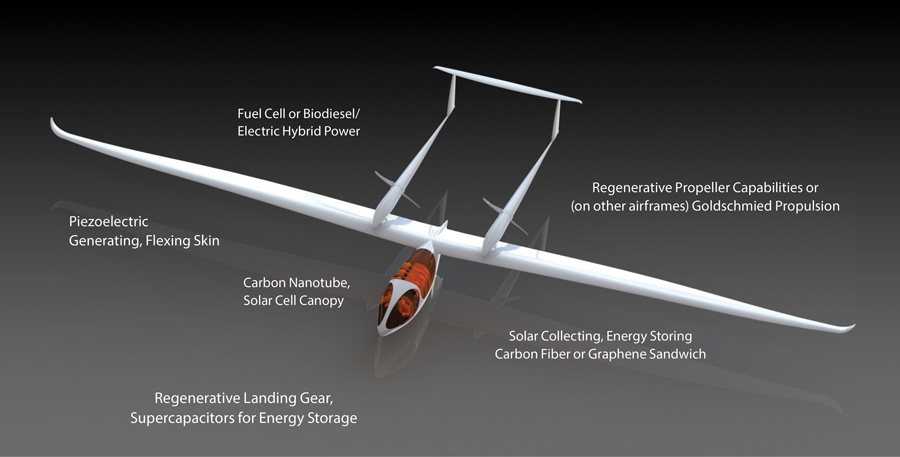 Richard Glassock of Highgate Systems created this eight-seat sailplane concept to illustrate possible inclusion of new technologies. The ultimate goal would be to fly with no fossil fuel and to extract as much energy as possible from the act of flight itself.

Some of the world’s best minds are hard at work trying to discover the answer to everything—at least in the physical world. Scientists are struggling to combine classical mechanical physics with the surreal world of quantum physics and explain how the basic forces of the universe account for the wonders we see­­—or, with dark matter, don’t see. This intellectual debate attempts to combine the fundamental forces: electromagnetic, strong atomic, weak atomic, and gravity, into a comprehensive explanation of the universe itself.

The Grand Unified Theory (GUT) has its followers, with thousands of web sites and even a Facebook page, which seems to have devolved into endless chatter about pop culture, surely proof of entropy in action. Regardless of the chaotic nature of the not terribly scientific discourse, people are drawn to connections between seemingly unrelated objects or events. I might take this a little further than most, seeing in modern developments—with materials, solar cells, batteries and even instruments—the potential to develop a Grand Unified Airplane (GUA).

The GUA would use as few fossil fuels as possible (ideally none), and to practical limits, would be able to extract energy from clean fuels, solar energy, and even the very act of flight itself. Soaring flight, most efficient in its use of energy, attempts to pull energy for flight from the air currents around the airplane, including the horizontal gusts that drive dynamic soaring. As we’ll see, two major materials developments, graphene and its cousin nanotechnology, may contribute to a very different world for all of us. Different ways of using motors and wheels could augment the extreme push toward resource management. 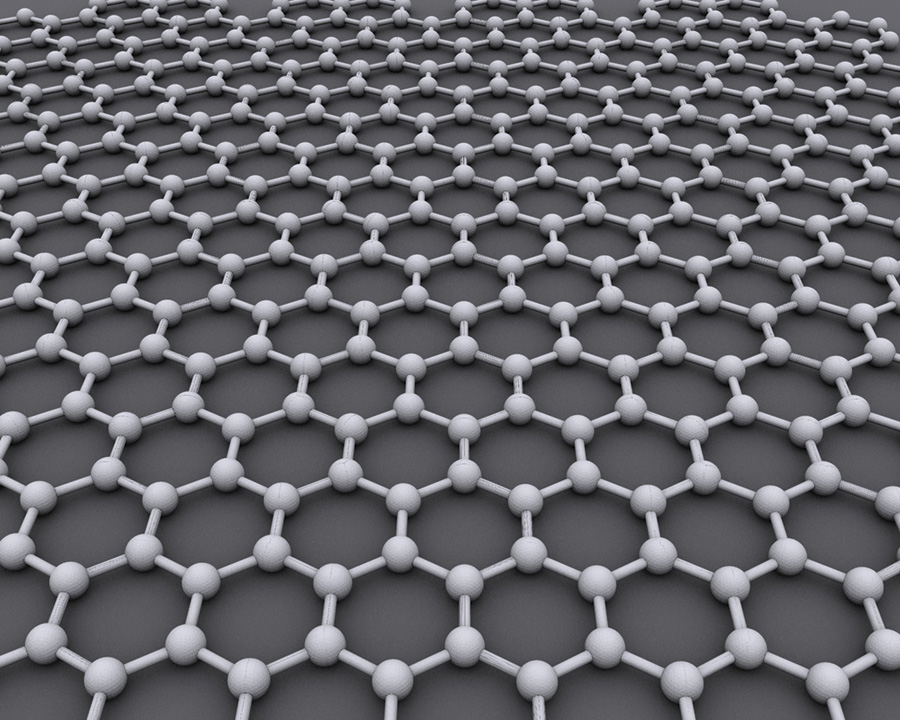 Graphene as a Structural Material

Graphene is a single-atomic-layer-thick carbon sheet, first discovered by two Russians who used Scotch® Tape to peel these layers from mere pencil lead. The thinnest possible material—with anything thinner than an atom becoming a state of sub-atomic particles in flux—graphene is a two-dimensional material.

It has enormous potential in structural and energy applications, including those for solar cells, batteries, capacitors and ultra-light components.

Graphene is also the strongest material possible, since counter intuitively, things get stronger as they get thinner and spread over a wider area. That’s the principle of stressed-skin construction, having thin skins spread across the breadth of the surface take the stress of flight as much as possible, rather than letting internal, heavier structures carry the load. Presenting the thinnest form of carbon sheet, graphene offers the potential to be part of a world-beating composite breakthrough. In the meantime, there are cutting-edge alternatives available now.

I Sing the Airplane Electric (Apologies to Walt Whitman)

At the risk of sounding like a graphene snake oil salesman, I find the material has even more to offer electrically. Graphene is potentially a terrific conductor, semiconductor, energy storage medium, or solar cell.

According to the MIT Technology Review, “Conventional materials that turn light into electricity, like silicon and gallium arsenide, generate a single electron for each photon absorbed. Since a photon contains more energy than one electron can carry, much of the energy contained in the incoming light is lost as heat. Now, new research reveals that when graphene absorbs a photon, it generates multiple electrons capable of driving a current. This means that if graphene devices for converting light to electricity come to fruition, they could be more efficient than the devices commonly used today.” Scientists think that graphene-based solar collectors could double today’s highs of 30-percent efficiency—60 percent making solar powered flight a real-world experience.

Other researchers are tweaking graphene and other collectors to gather a wider range of light, not just sunlight we can see, but wavelengths above and below the visible range. Those efforts might pay off with extraordinary efficiencies that would enable wing-sized panels to garner enough energy for sustained flight.

Carbon fiber and fiberglass might not seem very battery-like, but Dr. Emile Greenhalgh of London’s Imperial College Aeronautical Department and his students have created carbon fiber/fiberglass sandwiches which store electricity and act as supercapacitors. Greenhalgh, reported here last year, has worked with Volvo to incorporate these into parts in cars, lowering battery weight and increasing strength simultaneously. Imagine a graphene-based sandwich, much lighter and potentially more energy efficient. Imagine this sandwich pulling in solar energy, charging the structure in the airplane, which could be similar sandwich material, and you have a flight object that could power itself.

Now combine this prospect with a recent discovery by Dr. Richard Kaner and his graduate student Maher El-Kady at the University of California at Los Angeles (UCLA). Using nothing more than a standard LightScribe DVD burner, El-Kady created over 100 micro-scale supercapacitors in under 30 minutes on a disc coated with a graphite oxide film. He tested the devices by lighting up an LED with the newly made supercapacitors.

Charge capacity is high, and El-Kady notes the ability to integrate these tiny supercapacitors with MEMS (micro electro-mechanical systems) or CMOS (complementary metal-oxide-semiconductors) in a single chip, or perhaps on sheets of graphene or carbon fiber. Couple these characteristics with graphene’s ability to capture electrical energy from sunlight and we could see a new structural, energy-producing and storing material with unrivaled lightness and strength.

These new findings point the way toward future materials very different from what we use now. 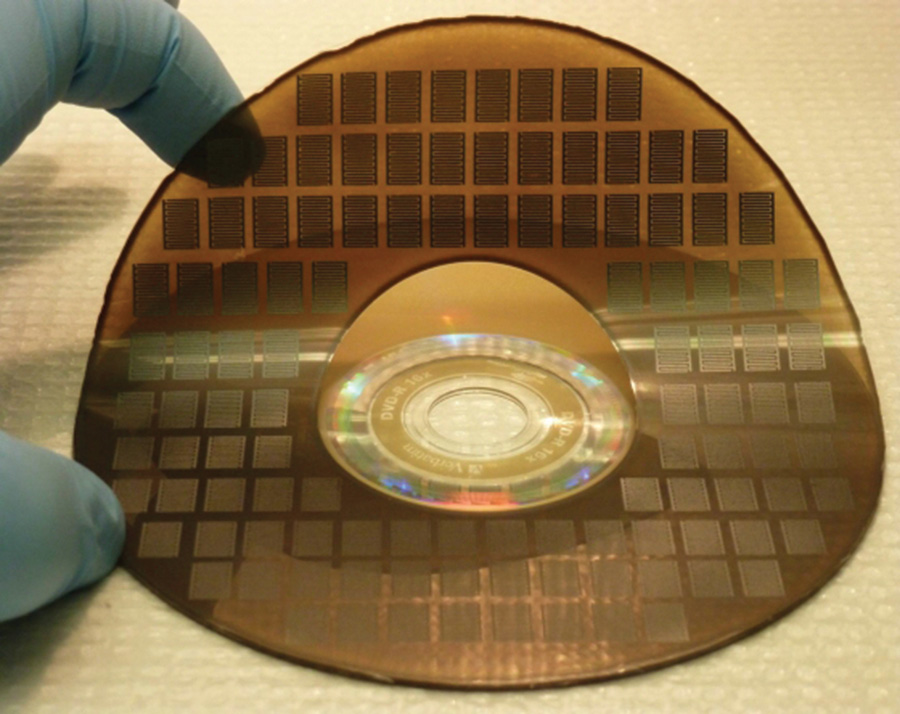 What if even the instruments or glass panels in your new airplane collect solar energy while remaining transparent? Let’s add in all that glazing that allows a terrific view. It can be a huge solar collector with Ubiquitous Energy’s film coating it. Being shown now as a solar collector that would allow unlimited battery life for laptops, PDAs and cell phones, the material could be produced in roll-printing type operations and integrated into thin-film deposition systems found in industrial processing.

The film is spectrally selective, collecting infrared and ultraviolet rays to generate electricity—and remaining transparent in the process. Its efficiency and transparency aren’t yet at the desired levels, but its developers are confident they’ll meet those goals as they continue research. 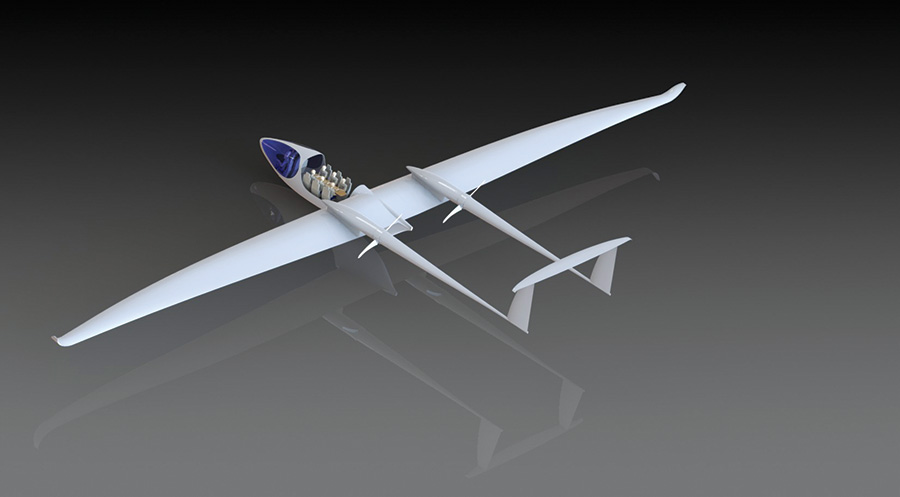 Both Taras Kiceniuk and Phil Barnes have discussed regenerative soaring at the annual Experimental Soaring Western Workshop, and Taras has developed two models that have recharged batteries when the motors are not in use. Retrieving energy from the air can come from wind milling propellers and help extend an electric aircraft’s range.

Another source, piezoelectric power, would take its energy from the pressure generated by flexing wings and control surfaces. Innowattech, an Israeli company, uses pressure from railroad tracks as trains pass over them, or roadways, as automobiles and trucks ply their way.

Think of a line of smaller pressure-to-electricity converters taking the in-flight stresses on a wing or stabilizer spar, or even the flexing inherent in fuselages, and charging a battery or running airplane systems. Exploiting even a fraction of the energy involved could be significant. Every addition to the energy taken in helps make the Grand Ultimate Airplane a more realizable concept.

New materials with seemingly near-magic characteristic could have a profound effect on future aircraft design. Sunlight, wind and our own motions through the atmosphere are loaded with energy. Learning to exploit that energy could lead to new heights of efficiency.

Marc Cook - March 15, 2011
0
What kind of performance can you get from a turbocharged Rotax 914 engine on the nose of a RANS S-19 airframe? Editor-in-Chief Marc Cook finds out.

Dave Prizio - February 18, 2013
0
Ladies and gentlemen, start your engines...but how? Dave Prizio considers some of the choices.