Electric propulsion for Experimental aircraft is coming of age. At each major show or event, there are more flying electric aircraft for builders to examine. More power options are available every month, and it is time that those wishing to experiment with silent propulsion had a guide to what’s available in the marketplace.

In the next few installments of “Alternative Energies,” we’ll look at a variety of motors available (and flying), their controllers, the batteries that power all, and finally, the challenges in hooking things together for powering your future airplane.

This month, we’ll focus on motors, give a few definitions to help ground the “newbie” in the field, and highlight features to look for when investigating what’s available. 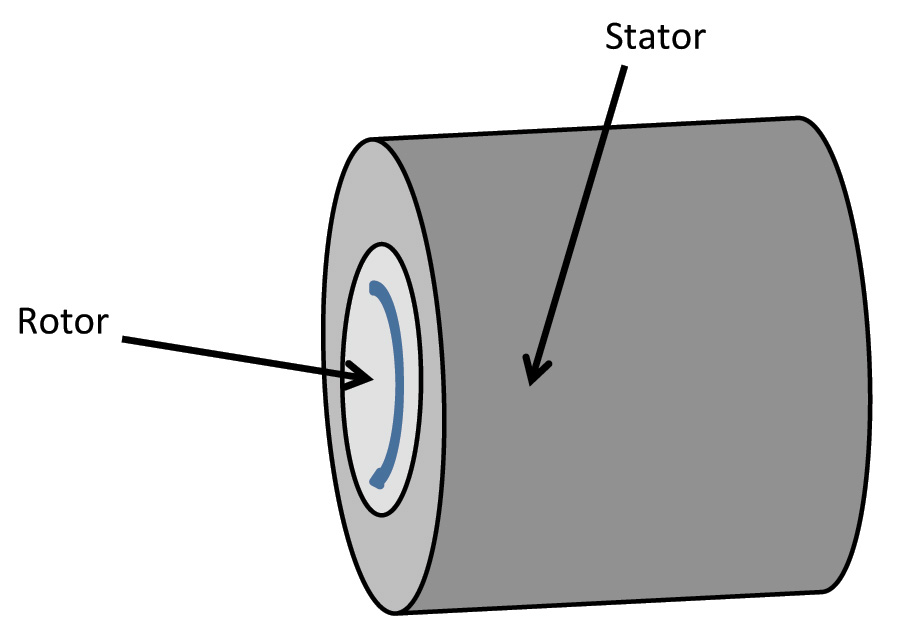 Inrunner Motor. In this type of motor, the rotor spins inside the stator.

Motors consist of two major parts: the rotor (which rotates) and the stator (which remains stationary). Traditional motors, the big cylinders you see turning things in industrial settings, are usually inrunners, with their rotor (also known as the armature in traditional brushed motors) inside the stator. Inrunners have some limitations. The interior of the stator restricts the diameter of the rotor, and therefore, the torque the motor can produce. Designers make the motor longer to give more area for the active components inside, but that increases the danger of heat buildup. 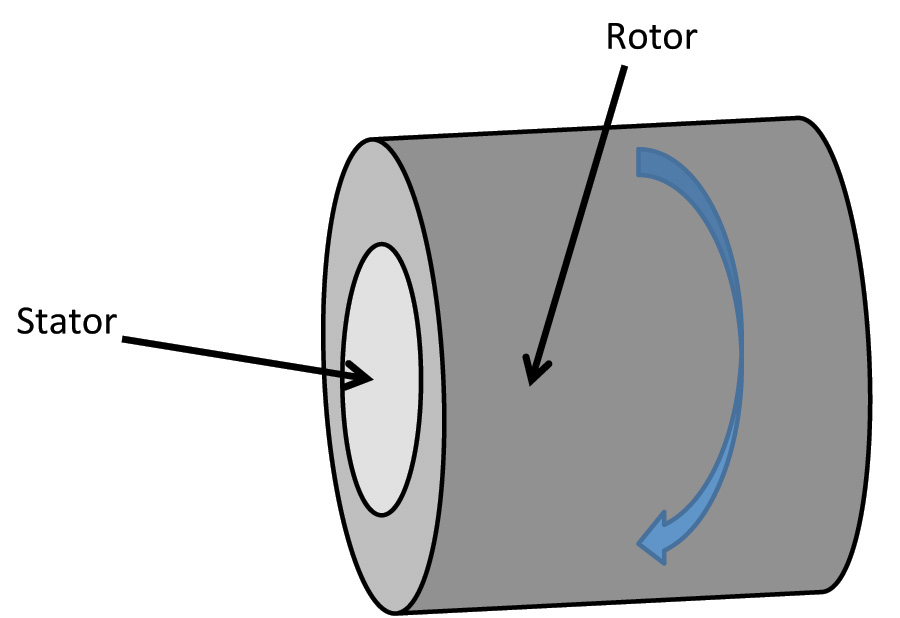 Outrunner Motor. The rotor spins on the outside, requiring hefty bearings on the stator.

Outrunners reverse the major parts of the inrunner motor, with the stator mounted in a fixed, central position, and the rotor spinning around as the outer casing of the motor. The propeller is fastened to the outer casing, a great deal like the configuration of WW-I rotary engines. The primary advantage is that diameters can grow, which increases the mechanical torque of the outrunner.

Brushed motors generate power with mechanical commutation. An excellent walk-through on www.howstuffworks.com explains the principles involved and allows us to explain the benefits of each here.

Brushed motors, although limited because of their mechanical commutation, or the switching of current reversals, are simple to control, and several aircraft are flying with these. This, within limitations, is a relatively inexpensive way to try out electrical aviation. 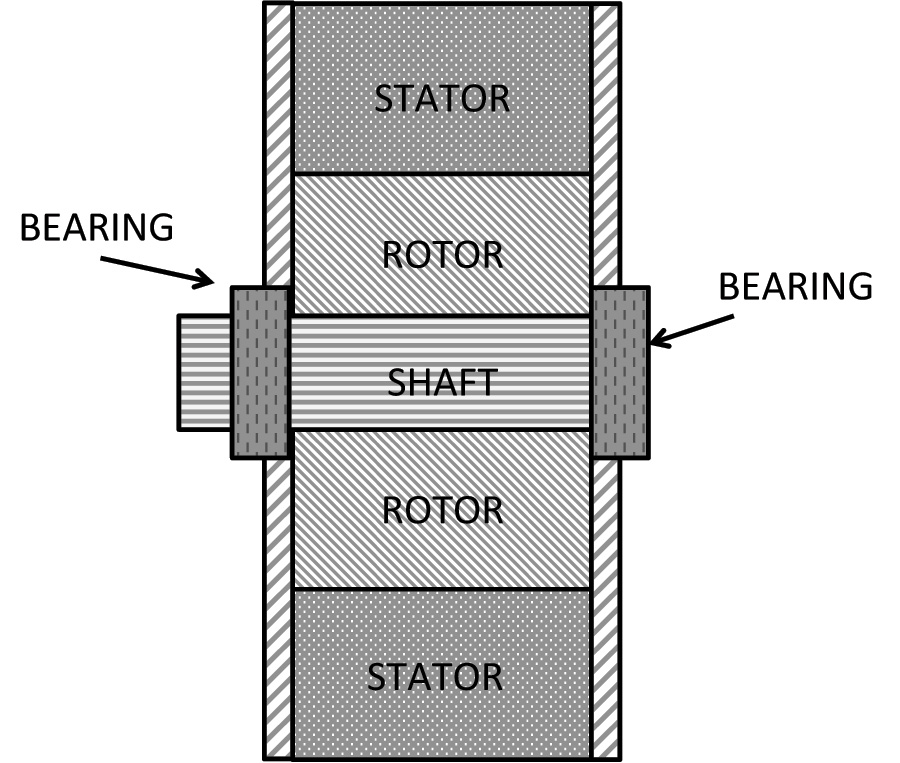 The commutation, though, requires carbon brushes, which press against the surface of the rotating commutator, a segmented conductive cylinder. The brushes and commutator wear from this rotational rubbing, and must be maintained or replaced periodically.

Brushless motors, on the other hand, have no parts touching each other except their bearings, long-life components claiming 30,000 hours between replacements, or about 375 average lightplane years at 80 hours per year.

Brushless motor commutation is an electronic process that requires careful pairing between motor and controller, something we’ll take up in the next installment. 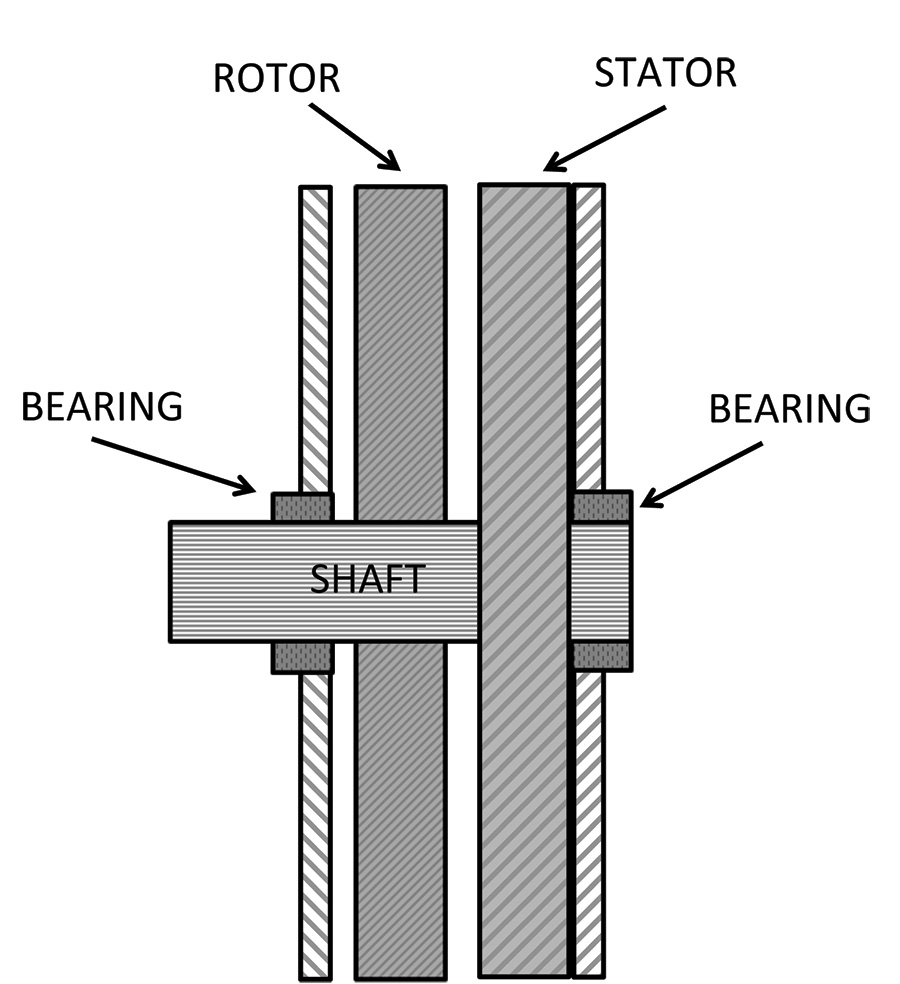 Axial Flux Motor. Electrical activity takes place around the axis of the motor.

Flux, or the magnetic field around a permanent magnet or coil on a motor, is generated by moving the magnets on a rotor past the coils on a stator, and depending on how a motor is configured, can be radial or axial. Motors that have their active elements lined up along the axis of rotation produce axial flux. Motors with active elements aligned perpendicular to that axis produce radial flux.

Motors are usually rated with the output in watts or kilowatts.

Motors are not only rated for kW output, but for volts and amperes (amps). Multiplying the maximum voltage the motor can use times the maximum amperage it can handle gives the kilowatts input for that motor. 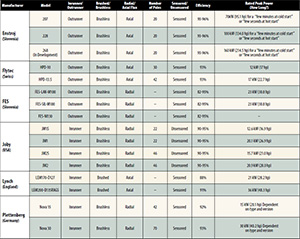 Just as a small internal combustion engine turning over quickly can produce the same horsepower output as a larger engine turning slowly, electric motors have differing power and torque outputs.

The term Kv indicates the rpms each volt’s input produces in the motor. A Kv of 20 x 100 volts would equal 2,000 rpm. Usually, high rpms for a given voltage will go with lower torque and low rpms will be associated with high torque.

Now that we have a little understanding of the terms and how modern electric motors work, let’s take a look at the currently available motors and controllers on the market, company by company.

Electraflyer’s Randall Fishman sells a brushed motor propulsion kit for trikes and ultralights which includes a motor, electronic controller, power dial and switch, fuse, connectors, ammeter and shunt, voltmeter, custom machined propeller hub, and digital motor temperature display with probe (batteries not included). Randall flies his ULS twin-boom pusher with a special brushless 20-kW motor, and has a development model of what was supposed to be a 30-kW outrunner on his personal single-boom motorglider. That motor has produced significantly more power than anticipated. We’ll take a closer look in a future article. 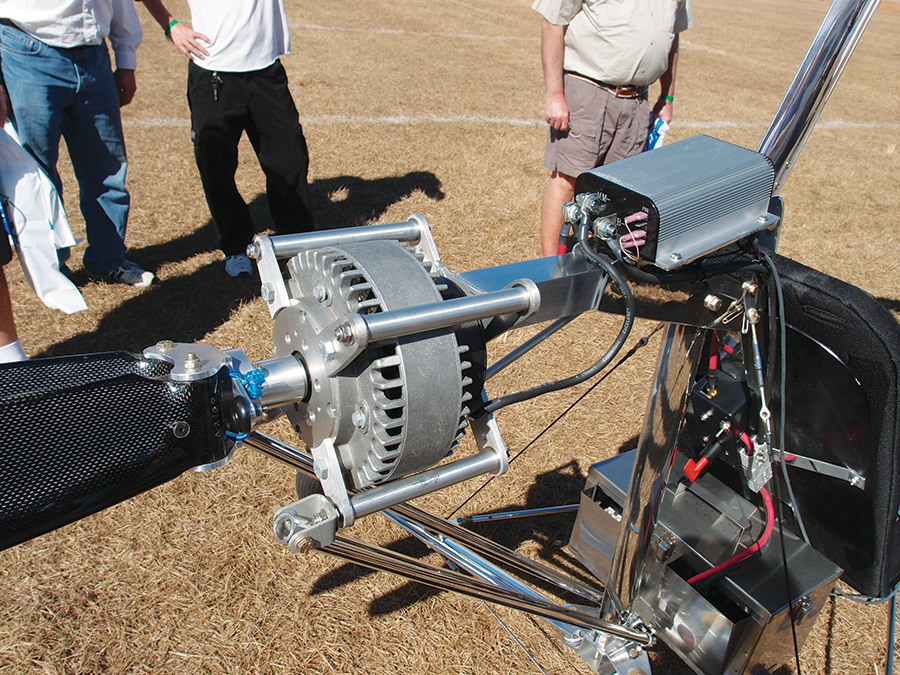 Enstroj’s Emrax motors are lightweight, high-torque, slow-turning motors that do not require a reduction drive to swing a large propeller. Despite their compact size, they put out torque that would do pride to large pickup trucks. Roman Susnik, the company’s director, is also the primary designer, having created the motors to fill a need for something that could power motorgliders. One of his motors flies on Eric Raymond’s Sunseeker Duo.

FES (Front Electric Sustainer) is another Slovenian company, part of a larger design enterprise helmed by Matija and Luka Znidarsic, father and son. They designed their first motor, controller, and battery pack to fit in certain sailplanes and sustain flight once the glider was launched—either through aero-tow or winch launch (and later with compact car tows). The motor and controller reside in the nose of the sailplane, which replaces the nose cone with a folding propeller and spinner. Batteries are stored in two packs behind the pilot. A later version of their original system can self-launch small sailplanes like the Silent 2. 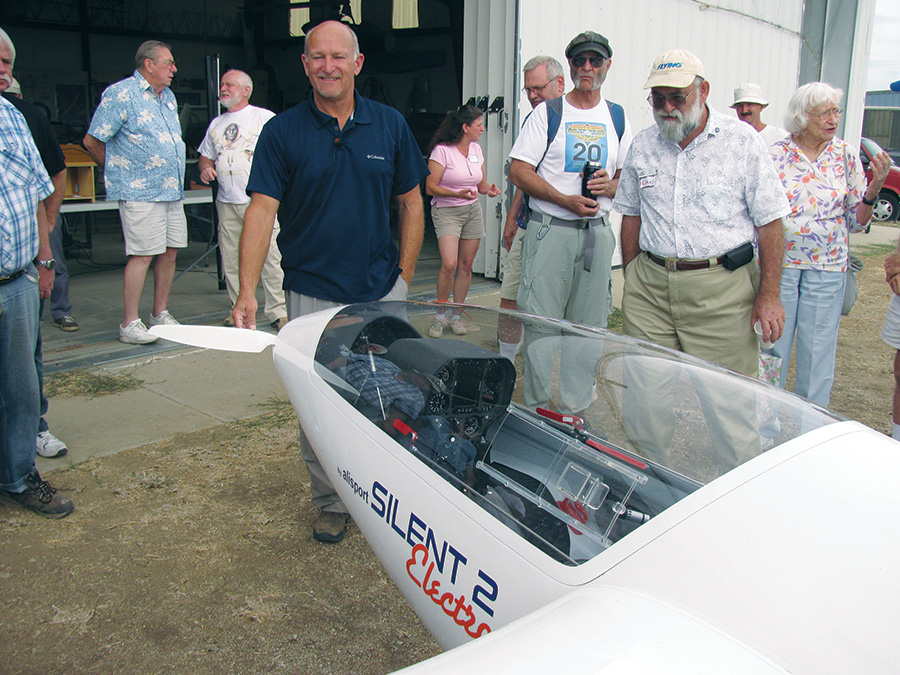 Flytec USA in Satellite Beach, Florida, sells the HPD-10 and HPD 13.5 motors. They are reluctant to sell to individuals, preferring to work with knowledgeable OEMs. Steve Kroop discussed with me the high and potentially fatal amperage even these little motors and controllers possess, and reminds all that use of these motors is not a trivial undertaking. 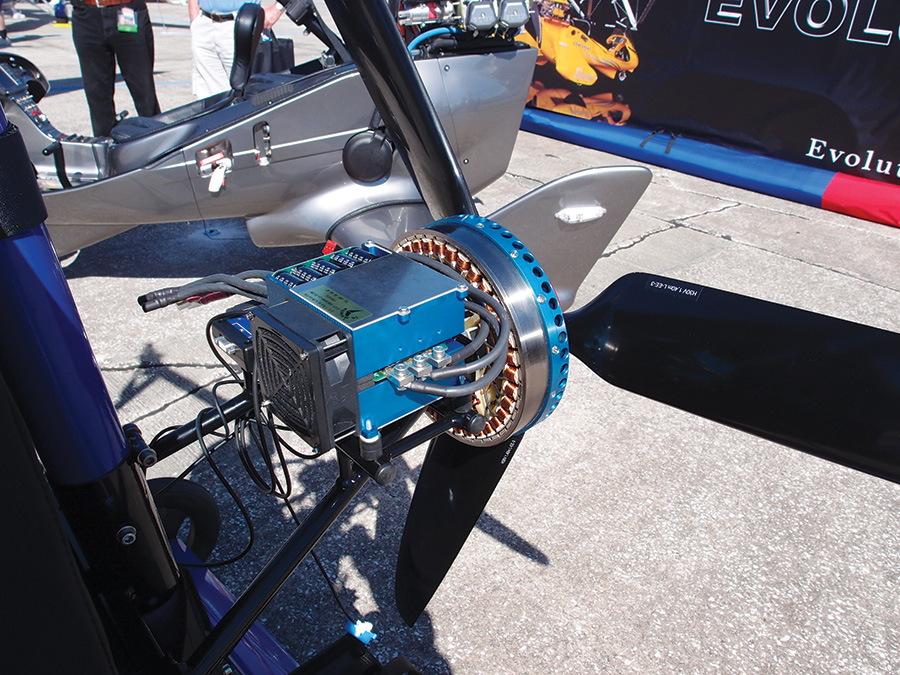 These motors are available only on the company’s GW100 powered parachute, GW280 ultralight single seater, and GW430 two-seat LSA-like airplane. The GW100 is powered by a backpack-type powerplant for which specifications are not currently available. The GW280 flies with a 24-kW (32-hp) PowerDrive motor seen at Oshkosh last year. The GW430 has a 48-kW (64-hp) system. We’ll follow up on these systems when they become available as separate units for homebuilders. 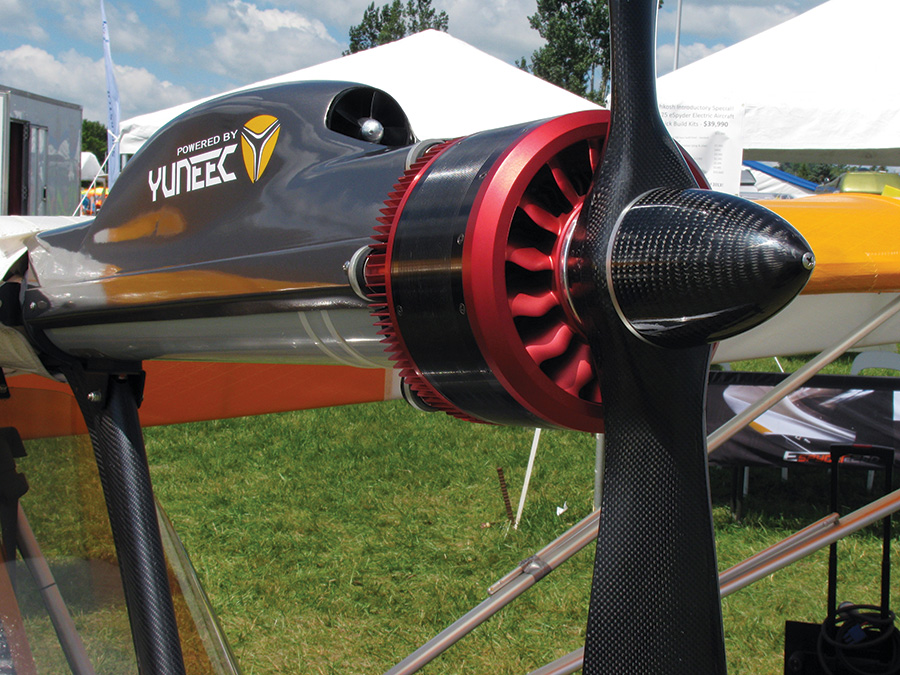 Joe Ben Bevirt started with inventive things like the GorillaPod series of tripods, knobby, adjustable camera holders that could fit anywhere. He used the wealth generated to design a series of electric motors and kites that could double as wind turbines. His inventive mind also came up with a self-flying, eight-motored aircraft that could act as a personal commuter vehicle. Joby builds, at this time, four different inrunner-type motors that have a distinctive outer case and a high number of poles to provide smooth operation.

Lynch motors have one American distributor: Cloud Electric Vehicles in Clarkesville, Georgia. Cloud Electric supplies motors, appropriate controllers, and connections for EVs. Their range of Lynch motors is expansive, and the table shows the two most promising models of those available. Note the much lower continuous power of these motors than their peak capabilities. This is important in choosing one of these motors or designing craft in which they might be used.

Plettenberg is a manufacturer of high-end model aircraft motors, ranging from the small to very large. Their Predator series can produce 15 or more kilowatts and are able to hover 40-pound airplanes. Plettenberg recently brought out the Nova series of motors in 15, 30, and 150 kilowatt sizes. The smaller two would be apt possibilities for ultralight aircraft, paramotors, and self-launching motorgliders. The 150 kW unit is intended for motorcycle racing, and might find a place in Cessna-size craft.

Rotex makes brushless outrunner motors ranging from 15 to 70 kW. Founded as part of FreeAir company in 2003, their motors have flown on EADS’ four-motor electric Cri-Cri, a paramotor, and most recently on the Evektor SportStar EPOS, a two-seat Light Sport Aircraft. Rotex also makes a complementary line of motor controllers.

Yet another Slovenian company, Sineton makes “pancake” type motors, which have a single rotor turning between two stators. The design allows high power and torque from a relatively small motor. One of their motors powered e-Genius, the second-place winner in 2011’s Green Flight Challenge. 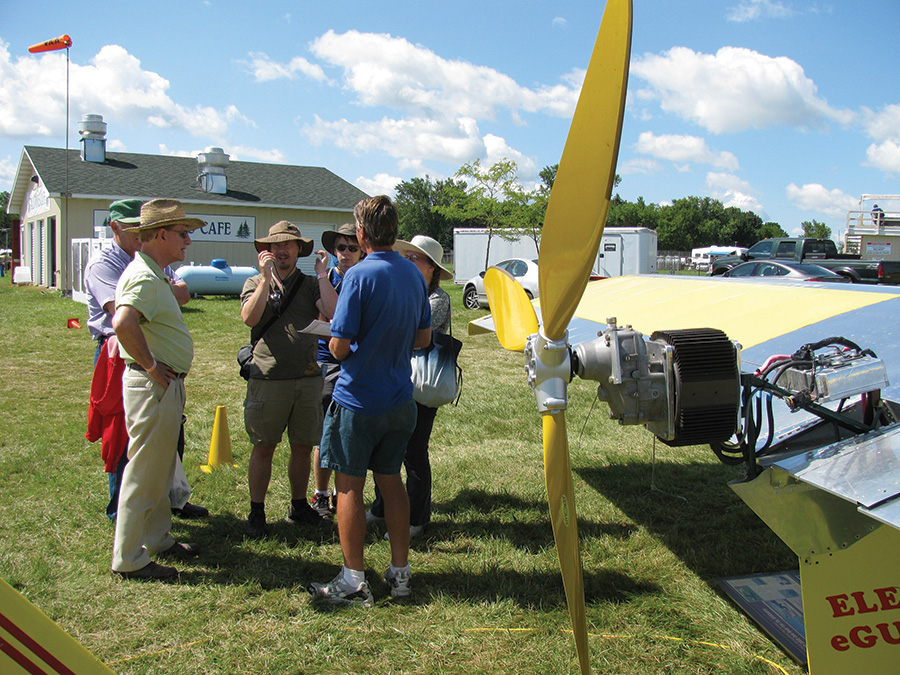 In our next installment, we’ll look further into the entire power system of an electric airplane. The market is growing, as are the number of flying electric aircraft!