Light Sport Aircraft (LSAs) are a challenge to designers, restricting weight while usually requiring the ability to carry one or two passengers at a reasonable cruising speed on a minimum of fuel. Europe has a thriving LSA industry, while America, so far, has many legacy LSAs such as Piper Cubs, Aeroncas (and their replicas) and some homebuilts that qualify, but only a few new home-grown products, mainly the RV-12 from Van’s Aircraft and the Sonex lineup from Monnett. Cessna’s Skycatcher is built in China, powered by a Continental “light” O-200, while most foreign and domestic craft are powered by a Rotax four-cylinder, four-stroke engine.

An electric LSA is even more of a design issue, with heavy batteries eating into the possible payload, often requiring a larger, heavier, more motorglider-like airframe, and reducing performance and range. 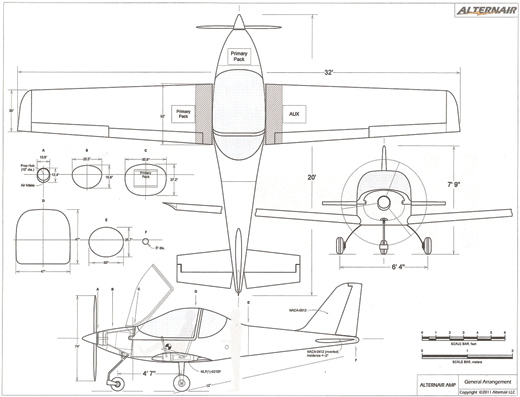 This three-view gives dimensions and highlights features of the Amp LSA.

Stephan Boutenko, founder of Alternair, Inc., thinks that a battery-powered LSA will promote the growth of an electric aircraft industry, possibly leading to an even more electrified infrastructure. A methodical person, Boutenko has built a careful business plan, developed a design for his projected aircraft (working from a Prescott, Arizona, location in association with Embry-Riddle Aeronautical University), and started a new headquarters in Ashland, Oregon, to realize his dream.

The market for such an airplane is promising, with its minimal medical requirements providing an incentive to many. Boutenko says, “It is our estimate that as many as 20% of today’s pilots fly in the Light Sport Aircraft category. Currently there are 140 LSA manufacturers in the world, and the number is growing due to the less-stringent certification regulations and the affordability of the aircraft operations. There were 248 new LSAs manufactured last year (2010 to 2011), and 150 the year before that (2009 to 2010). The LSA market is growing faster than Part 23 certified aircraft.”

In a narrower range, the Alternair Amp LSA would be a competitor to PC-Aero’s Elektra Two, a similar two-seater from Germany’s Calin Gologan and to China’s Yuneec E-430, which does not achieve LSA performance. Randall Fishman’s ElectraFlyer X, also more motorglider than LSA, would compete nicely with the Yuneec e430 in size and performance. It would be smaller and lighter than George Bye’s Cessna 172 electric conversion, a four-seater that gives up a back seat to make room for batteries and effectively becomes a large two-seater—but definitely not an LSA. Sonex has the electric Waiex, which has made three reported test hops to date.

A three-quarter rear view of the Amp’s smooth lines.

The Amp looks like a typical LSA with its low wing, tricycle landing gear and clear Plexiglas canopy. The 34 kilowatt hours of batteries replace the normal gasoline tanks in the 32-foot wings and behind the pilot’s compartment, 8.5 kWh in each wingroot between the two spars and 17 kWh forward of the firewall. This weight distribution enables installation of future, lighter energy sources without affecting the balance of the aircraft.

Despite the competition for this niche market, Boutenko remains confident in the approach he is taking. His estimate of what the aircraft can achieve illustrates his hopes for his creation. His confidence in the aircraft’s systems is great enough to allow him to offer a five-year limited warranty with free annual inspections during that period. Owners of fossil-fuel burning aircraft will appreciate that added economy of ownership.

• Preliminary design suggests that the Amp will be able to cruise for 2.5 hours at a nominal cruise setting of 11 kW and maintain a 90-knot (103 mph) true airspeed.

• The U.S. manufactured carbon-composite airframe will be light, yet durable and weigh just a little more than 300 pounds (not including the batteries). Total structural weight with motor will be around 330 pounds, and batteries add 550 pounds. Pilot and passenger can add another 440 pounds while the entire package remains within LSA limits.

• The aircraft will utilize state-of-the-art modern avionics with Aircraft Health Management (AHS) systems monitoring capability for safety and a higher standard of maintenance.

• The aircraft will initially feature lighter weight, higher energy density lithium-polymer energy storage, but may change to LiFePO4 battery packs, a little heavier but incapable of bursting into inextinguishable flame.

• The aircraft will be compatible with multiple types of U.S. electrical sources, including household 120/240 VAC, and electric vehicle (EV) quick charge station 480 VAC voltages. Further international voltage adaptor developments will be considered at a later time.

Is There a Market?

Customers would include Sport Pilots, with the airplane able to be charged for weekend flights and providing sufficient range to enable trips to neighboring airports and back to home base without recharging. Flight schools could use the “drastically reduced operating costs” to entice more student pilots into the sport, and to make them future customers for the airplane. Government clients might find the airplane a platform for patrolling national parks and borders, or performing law-enforcement or military applications. It can be plugged into a variety of electric systems, including normal house outlets, so it can operate from a wide range of sites. Its less than 65 dB operation would not disturb animals, criminals or border interlopers as it flies overhead, giving it a stealth aspect.

This approach represents more than merely creating a light airplane for the masses. It includes electrifying the entire airport infrastructure, and providing “green” energy that would reduce the costs and emissions of the aircraft and its support elements. Boutenko estimates that operating costs could be as low as 20% of those for a conventional Light Sport Aircraft.

Amp’s lithium-polymer batteries would be monitored through the AHM application. Such systems allow “e-enabling” or monitoring and prognostication of aircraft and systems’ needs. Mechanics could access history and trends for everything on the plane, and could plan maintenance and infrequent replacements based on that data. There is even some capability for rerouting signals though a neural-like network to “repair,” at least temporarily, a non-functioning system.

From the front, the Amp’s roomy cockpit is apparent.

Boutenko initially conceived of using an iPad to act as a glass panel, and recent apps costing from $1.99 to $5.99 might make that even more of a probability. Even though sellers note their programs are for “educational purposes” only, one wonders how long it will be before FAA-approved aviator avatars will be helping guide and monitor in-flight activities. If this were to include connections to motor, controller and battery monitoring as well as attitude, altitude and heading references, a true revolution could follow in low-cost aircraft instrumentation.

As currently configured, the panel can hold an iPhone or iTouch to display an electronic checklist. The display function (DF) can also display and accept entries on the aircraft and maintenance logbooks.

These records are stored in the Aircraft Health Management Function (AHMF) and can be uploaded to the maintenance laptop for review. A flight display panel will be installed, and customers can select their own VHF radio, Mode S transponder or GPS receiver.

All this electronic wizardry will be transparent to the pilot, who will see a carbon-fiber aircraft with a gross weight of 1320 pounds, and performance that emulates the LSA ideal. Able to lift off in 450 feet and land in 500, the Amp is designed for at least a 600 feet per minute climb (with refinements, 800 fpm), a 43 knot (49.5 mph) clean stall speed, and 39 knot (45 mph) stall with flaps, making the craft easily managed by the average pilot. 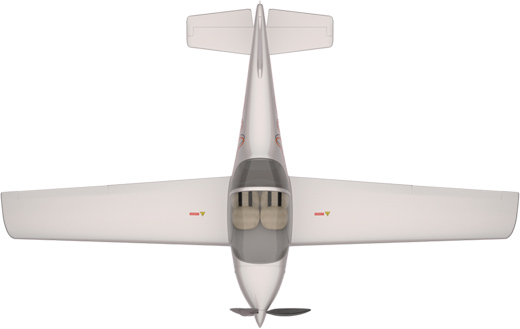 The planform for the Alternair Amp.

Surprisingly, the aircraft will achieve this LSA performance with a mere 20-pound, 30 kW (40.2 horsepower) LaunchPoint pancake-like motor. Boutenko says the torque it generates is terrific, though, and will easily spin the aerolastic three-blade propeller, which automatically flexes to accommodate the power being applied and the flight conditions in which it finds itself.

Recently, Boutenko teamed with Karl Young, founder and CEO of eXtreme Capacitors, Inc. Young reports that his creation of high power/high energy ultracapacitors has demonstrated “around 0.9 mega Joules (250 watt-hours per kilogram) in the lab,” with a goal of “5 mega Joules (1400 Wh/kg) for sport aviation.” (Current lithium-polymer batteries average 130 to 200 Wh/kg.) “We’ve already found ways to improve our existing design,” Young said, and he predicts success in reaching his energy storage goals. Young also predicts his ultracapacitors will sell for one-half to one-fifth of current prices for the best available batteries. The lower weight would allow increased payloads in electric aircraft; smaller, lighter airframes would bring costs down further.

Beyond that, he and Boutenko are planning an electric vehicle (EV) charging infrastructure for airports with paved runways (more than 5000) using the X-Caps. It’d be for electric airplanes, utility vehicles, energy trucks (fuel trucks) and EVs in the parking lot.

Young sees a larger role for his technology. “It’ll help to minimize stress to the grid, and become part of the smart grid in distributed energy storage for national security.” This would be similar to his vision for using X-Caps in that, “Electric vehicle charging stations would help utilities to level loads and shave the power demand peaks that would come with widespread EV adoption. With enough power density in a super capacitor, a driver could go 200 to 300 miles, and recharge in less than 5 minutes by tapping into a large super capacitor in a parking garage.”

If such a system used wind or solar energy for power, it could be “grid-free” and could possibly even supply excess energy to the common grid.

When questioned about the possible use of Young’s super capacitors in the Amp, Boutenko replied, “Supercaps may be possible, but which one comes first, the electric airplane or the batteries? I don’t know if anyone can truly answer that! Karl has been helping us as one of the Alternair team members. He might be what we need to get new investors, as well as to make progress in both the electrical and the mechanical areas.”

Almost all electric aircraft under development can be connected to a J17772 charging outlet, an industry standard for EVs. The Amp will be sold with its own CHAdemMO compatible portable charger, allowing it to be charged at any standard 120-, 220- or 480-volt outlet or J17772 charging station with its standard plug-in receptacle.

(According to the association’s web site, “CHAdeMO” is an abbreviation of “CHArge de MOve,” equivalent to “charge for moving,” and is a pun for “O cha demo ikaga desuka” in Japanese, meaning “Let’s have a tea while charging” in English. CHAdeMO is prevalent in Japan and parts of Europe now, with charging stations being installed on the U. S. West Coast.)

The planned price for the basic aircraft is $129,000, right in the LSA ballpark. With the five-year limited warranty and low operating costs, this might make enough economic sense to lure customers. If that doesn’t suffice, the intention to provide an Experimental kit for the airplane might. Boutenko is now accepting reservations for the Amp.

Boutenko has an ambitious development plan for his aircraft, with test flights expected in 2012. He and Young have even grander plans for the expanded use of that technology, plans that could free aviation from its reliance on outside sources of energy and possibly give back to the greater community. With the quiet passage overhead of electric aircraft and the contribution of “free” electricity back to the grid, who could complain about that airport next door?