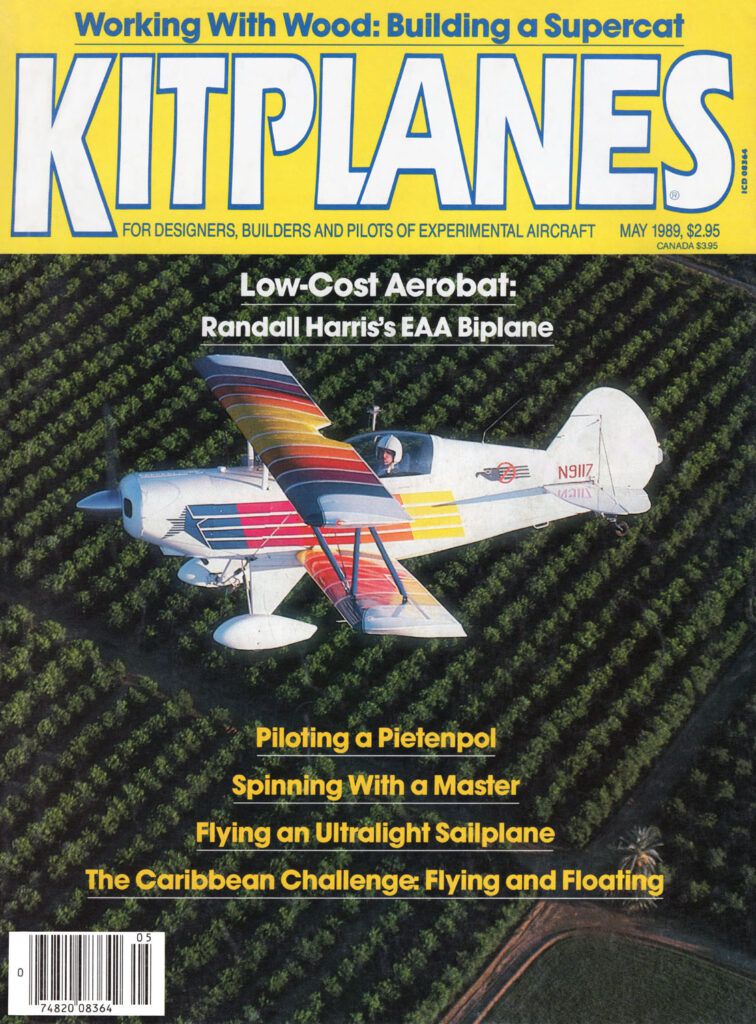 Randall Harris’ EAA Biplane was on our May 1989 cover in a paint scheme with more than a passing resemblance to the Christen Eagle. The Eagle was, as you may remember, the seminal homebuilt aerobatic biplane of the period, designed to take up where the Pitts Special left off. Every teenager of this era had a poster of the Eagle on the bedroom wall. “Like every other acro-bi-wing fanatic, I’ve dreamed of owning an Eagle,” he said. “However, it’s going to take a few more years of saving before that dream comes true. In the meantime, this lost-cost substitute will help me continue to practice aerobatics.” He describes watching other acro pilots in the practice area nearby. “I mix it up with Pitts, Skybolts, Decathlons and Eagles. I’m considered a small fry by their standards, but I’m thankful just to be up there in the company of those whom I admire. Sometimes, I just circle and watch others do their routines, wondering if they are having as much fun as I am.”

James Lawrence, continuing his long-running series on building a Kitfox, described making a paint booth and walked the reader through the process, from choosing the paint system (PolyFiber, in this case) to setting up and spraying the components.

“A Floatplane Odyssey” described Jean Gierden’s Canada-to-Trinidad adventure in a Quad City Challenger on Full Lotus floats. On his final leg, including 140 miles across open ocean, Gierden noticed the Challenger’s float attach fittings coming loose, which necessitated a precautionary landing. “I had no choice but to land and fix them,” he says in the story. “The sea had very few whitecaps so it looked acceptable for a landing but as I got lower I was very surprised to see the waves were 4 to 5 feet high despite the lack of whitecaps. It made no difference; I had to land and managed to do so by stalling the plane on the back of a wave. Before I got out on the floats, I tied myself to the airplane. The plane was really getting tossed in the wind and the waves, and I knew that I could be easily separated from it.” Eventually, he repaired the floats but the waves were too high to attempt a takeoff. After spending the night bobbing in the sea, Gierden decided to try taxiing back to land the next morning, only to run out of fuel before reaching the Dominican shore. There his journey ended after the Coast Guard boat offering him a tow back to land collided with the Challenger and broke a wingtip.

Steve Kimball’s six-plus-page distillation of the Rotax care-and-feeding school put on by Kodiak Research—that was actually the second part of a short series—went into great detail on how to inspect, repair and rebuild Rotax two-stroke engines. “People attending the Rotax school would have time to read this article more than 100 times. That’s how much more detailed the class is than this brief collection of tips,” he said, proving once again that hands-on training is difficult to beat. That we would spend so many pages on two-strokes is a sign of the times—before airframers moved toward four-stroke and (now) electric powerplants, before YouTube and before Rotax stopped making two-strokes at all.

Something else that’s changed since 1989? The last 18 pages of the magazine were devoted to The Classified Builder, free classified ads for everything from aerial photography and pilot aids to vacation hideaways and videotapes.