Hartzell rolled out its second-generation composite general-aviation propeller at Oshkosh 2006, and has taken its time to introduce it to the homebuilt world. Can’t say I blame Hartzell: The ASC-II represents new technology, and getting the production line rolling is just a bit more complicated than flipping a light switch. 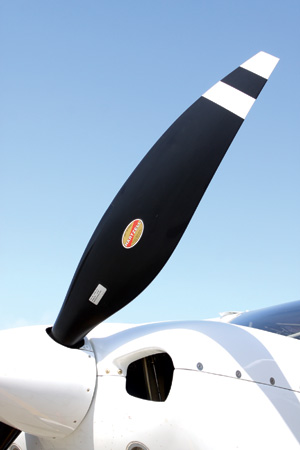 Whats more, Hartzell was getting hammered by requests from Cirrus for the blade, which is used as part of a three-blade propeller in the SR22 Turbo. There, the ASC-II seemed almost turbine-like—a characteristic I initially credited to the Continental TNIO-550-N. While the prop is smoother, the real benefit in the Cirrus application was weight. Adding a turbo to the SR22 makes a nose-heavy aircraft, er, nose-heavier; the prop was a solution.

Zip your timeline along to last fall, when I flew the Van’s RV-10 you see on this months cover, which had a slightly different version of the three-blade ASC-II mounted ahead of a Lycoming IO-540, not the smoothest engine in the world. I was shocked-shocked at how little vibration was evident. All of a sudden, the casual offer from Hartzell to try a two-blade version on my GlaStar Sportsman took on more urgency.

What arrived in the big cardboard box wasn’t quite what I was expecting. Early in the life of my Sportsman, I helped Hartzell test an 80-inch seaplane prop as well as the model 7497 blended-airfoil prop. This 74-inch prop has been a good performer on the Sportsman, and has become popular elsewhere. It passed the vibration survey without restrictions, while the 80-incher required a minor manifold-pressure/rpm limitation at the very edge of the envelope. In every way but acceleration and initial climb, the 74-inch prop was a better performer.

I opened the box expecting a 76-inch version, which is the native diameter of the Cirrus prop. Instead, I got the 78-inch (+2 inch) iteration, which may explain some of the data I’ve gathered. For a modestly powerful airplane, this might turn out to be a bit too much diameter. Well see.

After the installation and ground checks came the paperwork. The first pleasant surprise: At 41.5 pounds, the bigger ASC-II prop is 16.6 pounds lighter than the 7497 metal airscrew. Plugging that number into the weight-and-balance sheet, I found the empty CG of the airplane moved aft nearly half an inch. That’s a big deal, and a move in the right direction for a schnoz-heavy design—at least with the IO-390 on board.

The next two observations are probably won’t make headline news. With considerably less weight, the 7605 prop accelerates with surprising ease. I had to change my starting habits to keep engine speed in check, and the powerplant cranks faster and comes to rest at shutdown much quicker—in fact, it’s shades of the toothpick-like GSC wood prop on my old Rotax 912-powered Pulsar. Finally, one of the great benefits of this design: smoothness. Right out of the box, no external balancing attempted, the 7605 is fairly transformative with the counterweighted-crank 390. At takeoff speed and down through about 2500 rpm, vibration levels are better, though not dramatically so. But as you unwind the blue knob and the tach hits 2450 rpm, its like turning on noise-canceling headsets. At 2400, the engine is dead smooth, and even as low as 2300, the combination seems newlywed-like in its serenity. I could get used to that.

Performance is very good, but helps disclose some of the compromises in prop design. At lower altitudes (approximately 7500 feet and below), the ASC-II composite is definitely faster than the 7497. (See the table on Page 4.) I have several flights of data to prove it—normalized for cabin and fuel load, and close in atmospheric conditions. At high altitude, the composite is slower, suggesting that at the reduced power output expected with altitude, it is slightly too large to be efficient. One note on this observation: I have very little data from high altitude at engine speeds below 2500 rpm. Despite balancing, the 7497 was just not smooth at 2400 and below, so I rarely ran it there. In the months to come, I’ll collect more data—at least until Hartzell sends its collection agency to wrest the 7605 from my steely grip. It could be that the 7605 gains back a bit of the performance running slower at altitude; however, that’s a gain that will be partly offset by further reduced power. In other areas, the 7605 excels-it gets the airplane off the runway about a second sooner, and maintains a slight climb-rate edge at normal speeds of between 85 and 100 KIAS.

So the 7605 is sexy, light, smooth and desirable. What’s the catch? Yes, price. At press time, the 7605 runs about 65% more than a comparably sized blended-airfoil prop, close to $11,000. Some of that difference pays for the weight, of course, but there are other benefits: The prop is easily repaired and includes integral erosion protection on the leading edge. It ought to be far happier in front of a high-compression engine with electronic ignition than a metal prop, which is definitely sensitive to such configurations.

The ASC-II props represent a significant investment for Hartzell, and I suspect that volume and other manufacturing advances might help drive the price down. I would bet that if the company could get the price closer to a metal prop by even half, it would then become hard to recommend the suddenly outdated aluminum paddle.