Last month we went into some detail on how to use a computer fan to keep the avionics bay at some reasonable temperature. But I also told you that I didn’t want to have to waste the wattage of running that fan unless I had a good reason to do so. This month will give you a handle on that good reason to do so.

Like most things in this world, electronic designs are done in the relative peace and quiet of an engineering office or a lab with a temperature-controlled environment. We try our level best to take into account the variances that are going to come with temperature, and the computer tools at our beck and call will perform literally billions of permutations and combinations of component variation over temperature to let us see what to expect over a temperature range with our design. But nature will side with the one combination that the computer didn’t find. In Phoenix. In August. During a really critical flight.

The one axiom that we all design to is that the equipment must be warmer than the cabin temperature. Sometimes by a lot, sometimes microscopically, but the laws of thermodynamics are immutable. If a device produces internal heat, it is hotter than its external surroundings.

The nice thing about designing for civilian light aircraft is that we are packing the avionics around in the same temperature vessel we are in, and humans don’t much like to be cold or hot. Cold we can handle with sweaters and jackets, but aside from flying au naturel, there isn’t much we can do about the hot part of flying other than getting off the runway as soon as possible and climbing to cooler air at altitude as rapidly as possible.

The avionics aren’t all that thrilled about getting hot either. As I said last month, failure rates of any one component double with each 10 C rise in component temperature. Just about the last thing I want is for the altitude sensor in the encoder to flip out directly over LAX, so the problem reduces itself to keeping the avionics close to cabin ambient. We said we were going to do that with a fan. But we also said that we didn’t want that fan running when it was not necessary. 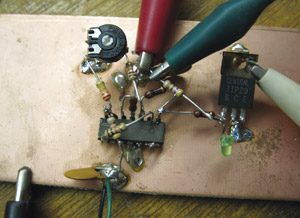 All circuits start life as a breadboard. This is a good example of breadboard dead bug construction with the legs of the IC pointing straight up like a dead bug.

Enter the thermal sensing probe and the digital comparator. That sounds like trouble and money. Not in the least. If you will recall from my KITPLANES article in October of 2006, I used a simple silicon diode as a temperature sensor and a 25 integrated circuit op-amp to provide a simple way of remotely reading the temperature of some part on a cheap digital multimeter. Never being one to reinvent the wheel, Im going to use the first half of that circuit as my temperature sensor and convert that op-amp into a simple comparator with hysteresis.

Lets set some parameters. First, Id like to have some way to set the temperature where the fan turns on. Second, Id like to run some big fans (say, up to half an ampere or so) if I choose. Third, I don’t want the fan to chatter, so it should turn off at some temperature below where it turns on. Fourth, Id like an indicator light to tell me the fan is on. Fifth, it should be stable from below battery drain limit (11.5 volts) to maximum charge limit (14.3 volts) and not blow up with minor overvoltages. No problem.

First, we need to come to some resolution about what temperatures we want to set our fan. Id say if you set it any less than 25 C (77 F), it will be on most of the time. If you set it at any more than 35 C (95 F), you will not be protecting your avionics. My call is somewhere between 28 and 30C (82 to 85F). Thats how Ill design the voltage divider. Second, how much chatter protection do you want? Engineers call this hysteresis; some call it slop, but my call is something on the order of 2 to 4 from turn-on temperature to turn-off temperature. Third, the op-amp we pick will survive battery bus voltage spikes of 32 (maximum 40) volts before giving up. Finally, well pick a driver transistor that gives us that half-amp of current to run a big fan if we need it. Let’s get to it. 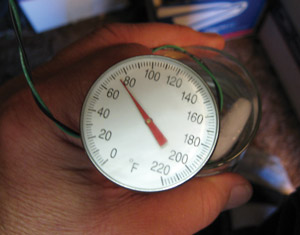 The old ice cube in hot water trick to slowly change the temperature of the water bath. Set the fan to come on at 82 F and it cuts off at 78 F.

But what do I pick as my source voltage for this divider network? We had better pick the regulated voltage at the output of U1-A that we so carefully selected if we want anything like accuracy. So, given source voltage and required output voltages, we can select a three-resistor stack to do this job. The equations are well-known, but the spreadsheets at www.rstengineering.com and then on Jims Engineering page let you do this as an iterative operation in seconds instead of in hours.

How do we get this hysteresis or chatter-suppressor? Very simply, connecting a high-value resistor between the output and the (+) input of U1C will give us hysteresis. How much? Well, given that the output voltage will be around 12 volts and the sensitivity of the (+) input is somewhere around 2 per millivolt, Id like about a millivolt fed back from the output to the (+) input. The output swing is about 12 volts, so Id like a voltage feedback of about 1000:1. If the (+) input is being fed by a 10K isolation resistor, then about a 10MΩ resistor will do the job.

Finally, how about that half-amp fan requirement? The op-amp can only put out about 25 milliamps, so we had better find a moosey (thats a technical term, you’ll get used to it) current amplifier. Did I hear the troops yell power transistor? Hey, you all are starting to catch on. The schematic shows the whole thing. No problem, right?

Over the years Ive given you sources for parts. Mainly Mouser and Digikey because I know that what I get today, I can probably get for the next 10 years. However, next month lets explore some second level suppliers where you can get the super bright LED from today, but next month the source may be gone. Stay tuned.