Billions sold. Sure, its a McDonalds line, but it might, after a hyperbole injection, also apply to the infamous tail kit that is the Can-I-do-it? teaser for more wanna-be builders than we can probably count. Providing an inexpensive example of the whole airplane thats easy enough to build but representative of the rest of the project is a smart and well-established tactic. OK. Maybe that should be thousands sold. But you get the point.

Zenith Aircraft also follows this concept but goes it one better: For a fee, you can attend a two-day factory workshop where you’ll have a chance to meet the crew, tour the facility and begin work on an all-metal rudder that might one day be on your own Zenith. Begin and, almost assuredly, complete that vital part of the airframe.

The costs are actually quite reasonable. If you intend to build a rudder, the fees range from $375 to $495 (the CH 801 rudder is bigger and more expensive) for the two-day course. If you want to attend but not actually build the rudder, the course runs $150. Incidentally, the cost of the whole course is the same as buying the rudder kit and building at home. In essence, you get the instruction and tour for free. 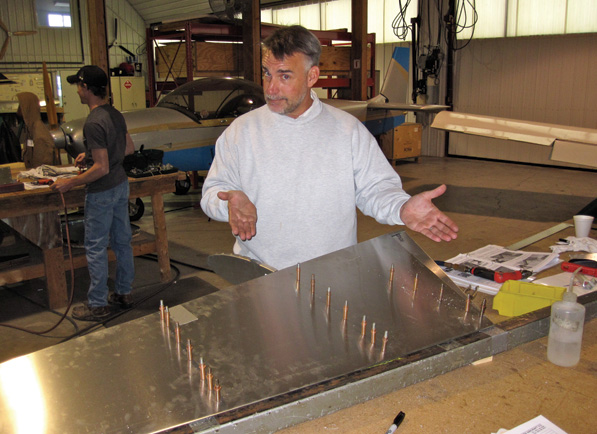 Your editor is getting close to pulling rivets. Anticipating a celebration, hes already asked about the location of the nearest Starbucks. Cue the sound of crickets chirping.

I wasn’t considering the totality of the project just after lunch the first afternoon because I was enjoying the satisfaction of the clank-pssssht of the pneumatic rivet puller setting the first of many Avex blind rivets. It had been an enjoyable morning, standing among the seven other attendees, chatting about airplanes and almost idly working through the rudder buildup. The Zenith rudder, an all-flying surface, is made of relatively few parts-and we would not be installing all of them because a few have to wait until the rudder is married to the airframe. A U-section mainspar runs from base to tip; there are three center ribs from the spar to the trailing edge, plus end caps. There is one short rib in the leading-edge nose section.

Zeniths use of the rudder for the first steps actually makes the rest of the airplane seem easy to build, and thats because the company has not converted the tail to a fully match-drilled configuration. The skins are all pre-drilled, pre-bent and pre-cut on one of the company’s two CNC routers. The ribs are pre-cut and formed but not drilled. A simple jig made up of two 2-inch-square, square-section steel tubes controls the alignment, but the skins are cut so accurately that its difficult to even fit the structure together out of shape. While most of the CH 750, for example, has fully matched components-there are holes in the skins and the sub structure that are supposed to line up-the rudder has only the skins punched with slightly undersized holes. These pilot holes are drilled out at the same time new holes are made in the ribs (it sounds harder than it is). Even the never-built-before contingent of our group had the intellectual light bulb go on during the first day.

Amply illustrated and logically laid out manuals guide the builder with step-by-step assistance. Although we had members of the Zenith staff milling about the work tables, any of us could have constructed the piece without outside help. In fact, once I had the lay of the land, I found myself referring less frequently to the builder workbook, which is often a recipe for disaster.

About the only thing missing were some of my own tools. Zenith supplies everything you need to complete the rudder, including a delightful little Sioux palm-sized drill and a pneumatic rivet puller. But the tool kit included a large conventional bit to deburr drilled holes. I really pined for my fluted deburring head in a ratcheting screwdriver, by far the simplest and quickest method Ive used for deburring holes. We also made due with files instead of hook-style deburrers to take the edge off the sheet aluminum. Oh, well…cant have everything.

Of course, the visit is about more than the tools or the rudder. Two leisurely days spent at the factory will give you an opportunity to see how the company works, fly one or more of the demo aircraft and get a sense of its manufacturing ethos. Here I would describe Zenith as modest but thorough. The young woman who does the bulk of the welding has impeccable credentials-though she wouldn’t be drawn out on whether women create neater beads than men-and I was happy to see quite a lot of test apparatus, including a jig for pressurizing and testing each and every welded-aluminum fuel tank produced.

The two-day visit underscores the sense that Zenith is a real, profitable, serious player in the kitbuilt market. There are clear capital investments and a fair bit of materials stock on hand, two items that are hard to fake by companies hanging on by a shoestring.

But Zenith from the visitors standpoint is also very laid back. I got no sense of the hard sell, even though a couple of the attendees were there to determine whether they wanted to build a Zenith or something else. Another participant, who had never built anything before, was there as a jump-start to his own CH 750 project. Imagine his delight in seeing the birthplace of his kit, the components of which were neatly crated and prepared for him to trailer home that weekend.

Im not sure its the same for everybody, but a personal connection always seems to make a relationship work better. It strikes me that I always get better service from people Ive met, who have shaken your hand, than those I haven’t.

So I fail to understand builders who take on such large projects without visiting the factory where the kit is made. After all, you are going to have a sizeable investment in your project that can be made or broken by the health of the kit company as well as the attitude of those you’ll come to rely on for building and flying assistance.

Moreover, I am utterly mystified by those who will build before flying. It seems to happen all the time. Emails and phone calls come in from builders who ask about various designs, and when I question them about how they like their choices flying qualities, I often get this answer: I don’t know. Havent flown one yet. Inconceivable!

When you get your design choices down to a few, please cash in your airline rewards and go for a visit. Its the only way to know if you’ll like the company as much as you like the airplane.