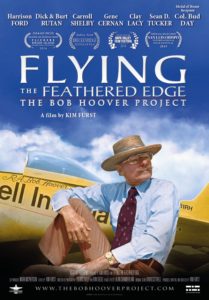 Oshkosh, Wisconsin, July 15, 2015 – This weekend, Bob Hoover, legendary aviator, will make a special appearance at the showing of his documentary, Flying the Feathered Edge: The Bob Hoover Project at this weekend’s EAA AirVenture Oshkosh event. The film will kick off the EAA Fly-In Theater film series as the first of two feature-documentaries presented Sunday. Hoover will be joined by the film’s director and producer Kim Furst as well as Sean D. Tucker to introduce the film.

Flying the Feathered Edge: The Bob Hoover Project honors Robert A. “Bob” Hoover, an aviation legend and World War II veteran. In this inspiring 86 minute film, the renowned aviation figure tells his life story as an Air Force fighter pilot, experimental test pilot, and airshow pilot. His lifelong dedication to aviation has made him one of the most admired figures in flying. The film features conversations with actor and pilot Harrison Ford and air show legend Sean D. Tucker, along with appearances by Neil Armstrong, Carroll Shelby, Dick and Burt Rutan, Clay Lacy and other experts in the aerospace field.

The showing of the documentary will precede nationwide showings on August 19th in celebration of National Aviation Day including a public screening on Capitol Hill. Visit the website at www.thebobhooverproject.com to bring the film to a theater near you.
This special showing of Flying the Feathered Edge: The Bob Hoover Project at EAA AirVenture will begin at 8:30 PM on Sunday July 19th at the Fly-In Theater.

Dave Prizio - April 17, 2012
0
Dave Prizio attends the Lycoming Engine Service School in Williamsport, Pennsylvania, and comes away from the experience with many lessons.

All About Avionics: EFIS Dreams 2010

Stein Bruch - July 7, 2010
0
In this years update of the options for EFIS buyers, we find that while some companies have folded or opted out of courting homebuilders, others are marching ahead with new products, features and cooperative arrangements. By Stein Bruch.