As I write this column it is 18 F in Atlanta. Unfortunately, by the time you’re reading it, most of us will be sweltering in summer heat, probably at Oshkosh. But hopefully, some of these thoughts and ideas will help you get prepared for next winter. I know there are many of you who probably even think 18 is balmy, but for this transplanted Clevelander living in Atlanta, it feels downright cold! Seeing as I just saw an article from Russian scientists that we are perhaps entering another Ice Age, chances are it will be even colder next winter. 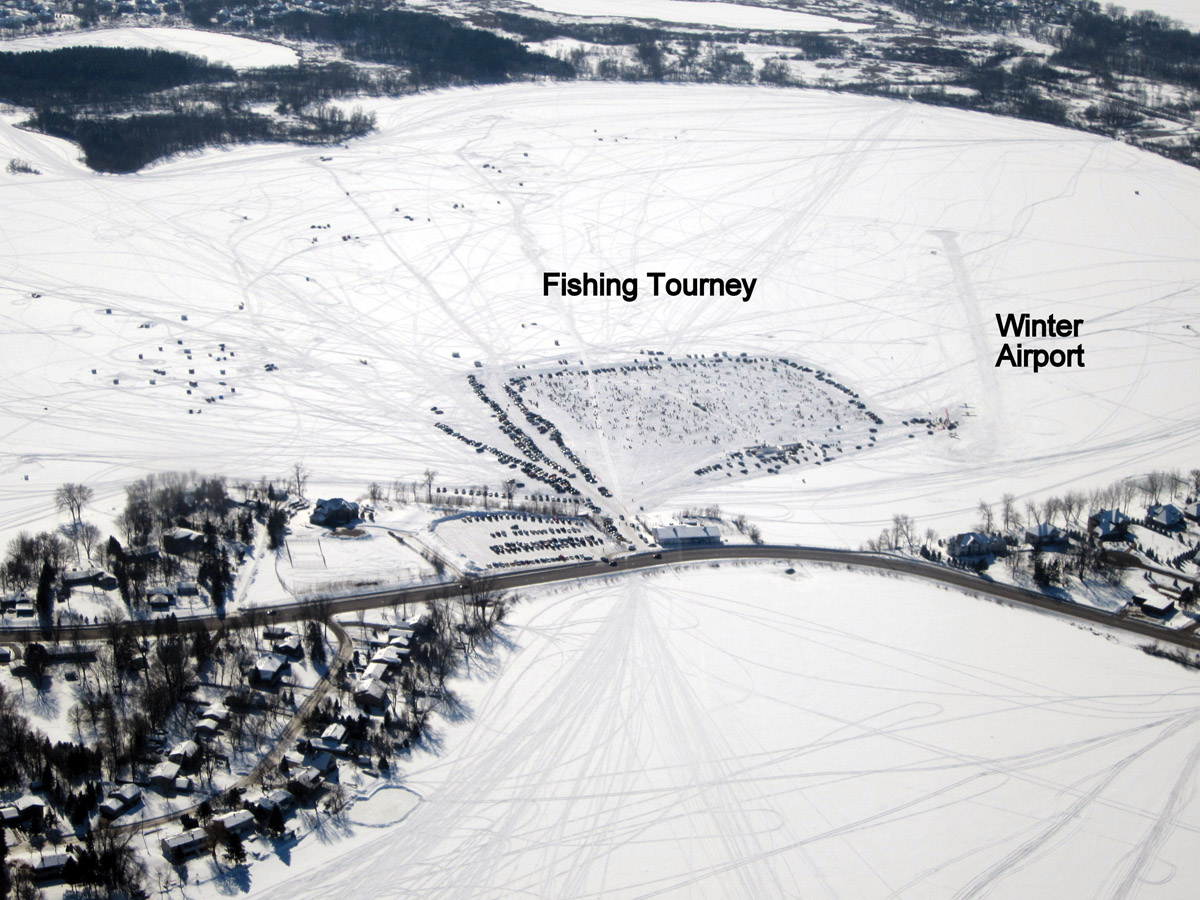 You know it’s cold when you’re watching hundreds of guys on Minnesota’s Centerville Lake from your plane—fishing! (Photo: Pete Howell)

Yes, we moved from Cleveland to Atlanta over 25 years ago due to a job change at Hewlett Packard. My future boss (and now a longtime best friend) had me come to Atlanta for the interview on a nice, sunny day in April. To this day I still believe he checked the weather forecast before inviting me down on a particular date. But really, there was no challenge, as we probably hadn’t seen the sun in months in Cleveland by April anyway!

Those of us who are really immersed in aviation don’t often let the elements get in the way. In the late ’70s and early ’80s, when I was flight instructing part-time in Cleveland, aviation was really hopping and we were busy. If you weren’t flying, you weren’t being paid. Unfortunately, there is a big body of water called Lake Erie that has a very large impact upon the early winter weather. It is a huge moisture generator, and until it cools off or freezes over, you can count on wet snow, icing, and low ceilings. Once it cools down, usually in the middle of January, the days are nice and clear, albeit bone-numbing cold at times. Thank goodness for the line boys, who usually took care of all the preheating needs of the aircraft. Most of us looked like Ralphie’s brother in Christmas Story though, as we learned that the cockpit heaters really didn’t function very well at those temps, especially on the ground while warming up the engine. Couple that with the need to keep the doors open to prevent the windshield from fogging and icing on the inside; the prop blast into the cockpit was really quite miserable. But, we were having fun!

Winter Ops With an RV-4

When I finally finished my RV-4 on Christmas Eve in 1983, we ended up moving it to the airport during an unforecast snowstorm. That was the beginning of my foray into cold weather ops with my own airplane. I discovered that there was now a requirement for a different set of equipment that needed to be packed in the car in order to go flying. See, I quickly learned that it made no sense to keep the snow shovel and snowblower in the hangar the first time I drove to the airport and saw the three-foot snowdrifts blocking the entrance! I had to borrow the equipment to now get to mine. So, I learned to keep them in the car after that episode. I also learned to add some extra time to the allotted time to go flying, as sometimes just extricating the airplane from the snowbound hangar, chipping the ice away from the doors so they would open, and then preheating the engine with a torpedo heater actually exceeded the flight time. But I was having fun.

I started to think about creative ways to shave time off of the whole process, and realized if I could somehow keep the engine warm, that would help quite a bit. Don’t forget that this was in the time before internet and cell phones, so there wasn’t a way to remotely turn on heaters. Most of the programmable timers I could find would only work on a daily cycle, and at the time my flying was mostly limited to weekends, so I didn’t want to preheat the engine every day. I finally figured out that a 60-watt light bulb in a trouble light tucked up underneath the cowling through the exhaust exit, coupled with a nice big blanket over the cowling, always managed to keep the engine above freezing no matter what the outside temps were. No more waiting for preheat!

The other thing I learned quickly was to preheat the seat cushion in my car by leaving the car running and the heater on full while I shoveled the snow. After a while I finally remembered to just take the cushions with me and leave them in the car. The cushions were made of temper foam, which at normal temps is really nice and comfortable. But below freezing, they were like a brick! The front one wouldn’t even compress enough for me to close the canopy unless I preheated it.

Of course, the cockpit heater was totally worthless, and it is still hard to forget the numbing cold prop blast in my face from having to keep the tip-over canopy open while taxiing to prevent fogging the interior. I never did figure out a good solution for that one other than a ski mask, which I wasn’t fond of due to the viewing restrictions it imposed. Taxiing at an airport down narrow and newly plowed taxiways with a very-low-wing airplane such as an RV-4 was a real challenge. Unfortunately, during those years of excessive snowfall, there was nothing to do except wait for warmer weather to decrease the height of the snowbanks. Many times I walked the length of the taxiways with a snow shovel to knock down the highest peaks of the snowbanks. Then, of course, I sat in the car for a while to thaw out! Fun has different meanings to each of us, doesn’t it?

I also soon learned to regularly check tire pressures on warmer days, as these were prior to the Leakguard tubes we have today. Another lesson that turned out OK was to stay off of the brakes as much as possible during taxiing, not that they did much good on the ice-covered taxiway anyway. The heat from the brakes melted the snow, but if the runup took too long, they cooled back down and would freeze stuck! It was a balancing act to try to get the tailwheel airplane rolling again without nosing it over. Once I had the left brake freeze tight in flight, only to realize it upon landing. I thought for sure I was headed into the snowbank with disastrous results when it finally broke free.

One of the happier days of my life was when we moved to Atlanta, and I gave my snowblower to my father-in-law. It was a win for both of us as we were both very happy. Perhaps he was happy I was leaving, but I attributed it to him getting a nice snowblower.

One of the first things I noticed after moving to Atlanta was that my flying hours doubled in the first year! Yep. Weather was no longer the big factor as it was in Cleveland. Plus, since moving to Atlanta, we’ve always either had the airplane at home in the garage (Kitfox) or in the hangar at our home. While the temps aren’t nearly as cold (the 18 degrees here today will be gone by tomorrow instead of next month like Cleveland), I still practice some of the lessons learned.

I preheat the engine whenever the outside temps are in the low ’40s or lower. Why? Well, the oil temp comes up much faster, making for shorter engine warm-up time, which helps to eliminate lead buildup on plugs and valve guides. The 60-watt light bulb is no longer needed, as I like to use the E-Z Heat stick-on oil pan heaters. I plug it in the night before a flight, still covering the cowling with a blanket, and the whole engine and oil is at 100 degrees the next morning. I even use them on the remote oil sump of Rotax engines with the same result.

I have learned one thing to be careful about when it comes to moving the airplane out from a hangar that is at 50+ degrees into 18-degree air outside. The rapid cooling of some parts can cause problems, such as canopy cracks in any stressed areas. There is nothing like the loud POP of a canopy crack as you are pulling it shut to remind you that you should have been more careful. Tough lesson learned.

I was reminded this week of how much I don’t miss chipping away at the ice and snow to go flying. The north side of Atlanta actually had 3-5 inches of snow over the weekend, and I had to go to a north-side airport Monday morning to fly with a new RV-10 owner. Guess what? The hangar doors were frozen shut with ice, along with about four feet of ice in front of the hangar. We managed to get the doors open using a shovel to break up the ice, and then pulled the aircraft out of the hangar with a rope and a four-wheel-drive truck.

I still do look forward to a cold season in Atlanta, although I’m happier when it is not too cold and doesn’t last too long. Two reasons—there isn’t a need to do a weight and balance after every landing due to bugs, because there aren’t any in the winter. Second, after flying all summer in the heat and commensurate higher density altitudes, it is really nice to experience the climb rates of the RV-10 in the colder air. Sometimes they are over 2000 feet per minute, and the air is so clear that we joke about being able to see into the middle of next week! The heater design in the RV-10 is super powerful, and coupled with the heated seats, we are able to fly in comfortable shirts and pants, with the cold weather survival gear on the back seats in case of an unplanned, off-field landing. Dressing like Ralphie’s brother is a distant memory.

I had to fly to Missouri last week to do a prebuy inspection on another RV. The OAT was 16 F at KTBN when I landed. I quickly covered the engine with a blanket, blocking the air inlets in order to keep the engine warm. I sure enjoyed the departure in those temps. That was fun!