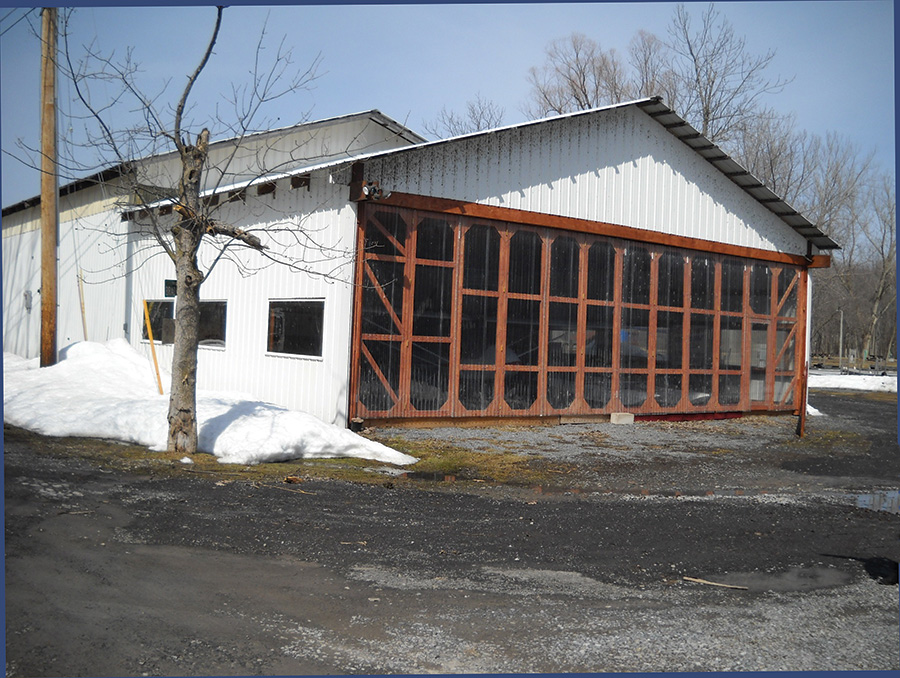 Translucent plastic panels are cut from 12-foot sheets of Suntuf, a durable polycarbonate material that is often used for greenhouses.

Like many young boys, I became interested in airplanes at an early age. I built quite a few model aircraft over the years. As I got older, one thing lead to another and about 20 years ago, I built a Challenger II kit airplane. After finishing that project and flying off the first 40 hours, I used a hangar that belonged to the EAA Chapter I’m a member of. But I soon realized a hangar of my own was a must.

I built a 32x40x12-foot metal hangar. Living in upstate New York in the winter, I soon realized that a hangar door was also a must. Upon pricing commercial hangar doors, I learned that I couldn’t buy what I wanted for much less than $9,000; so after researching all kinds of doors and reading everything I could get my hands on, I decided to build my own. 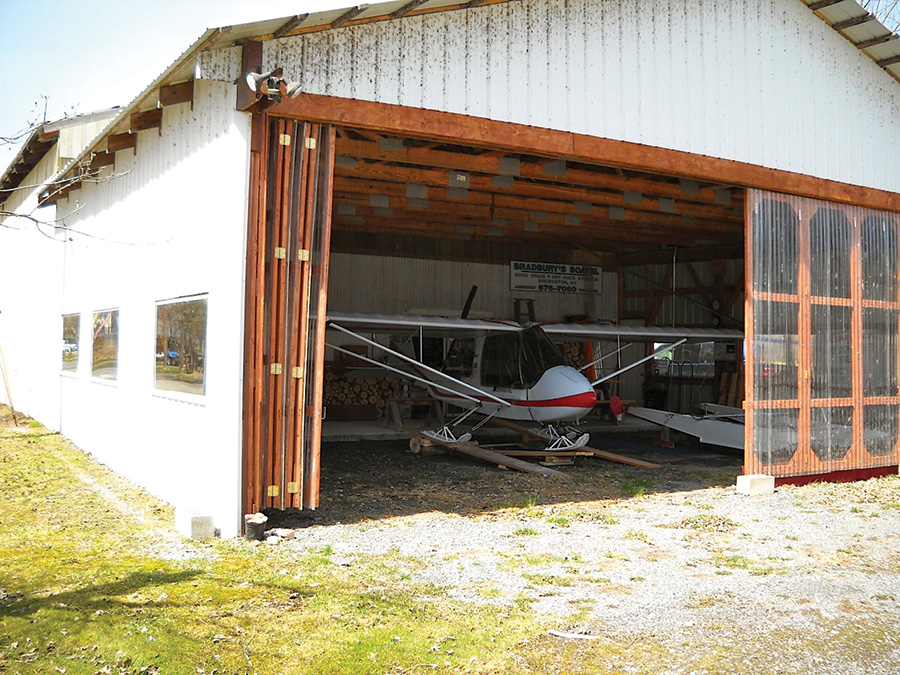 Living on Oneida Lake in upstate New York, author keeps his Challenger II on floats in the summer and skis during the winter.

I own a marina and as winter is my slow time of year, I spent most of it building the doors.

It was a learn-as-you-go project that turned out great. The design consists of multiple doors that hang from an overhead steep track. I built a jig to be sure the doors turned out straight and square. My hangar opening is 39 feet wide and 12 feet high, so I figured the sizes and made six doors for each side. I used 2x4s and glued gussets on all corners, using two 6-inch nails in each joint, as shown in the drawing. 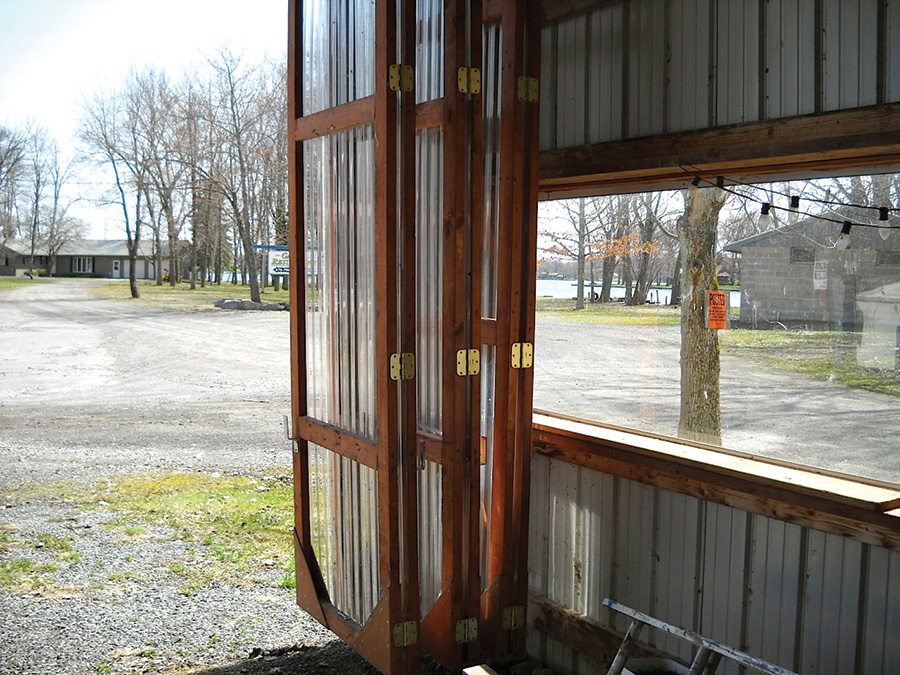 Individual doors are stitched together with common butt hinges, four per joined door.

I built a header to go across the hangar opening and beefed it up for added strength. I then installed a barn door track (purchased at Tractor Supply Co.) on the inside of that, so the doors would fold inside.

I then put one double set of rollers (also purchased at Tractor Supply Co.) on every other door. This allowed them to fold together so that they all pushed to each side. Each door has four hinges 3.5×2 inches, which I purchased at Home Depot for $1 each. The hinges that attach to the end wall have to be much bigger. After I finished building the doors, I put on a redwood stain and sealer before I hung them. I framed a doorway out of one of the twelve door frames to form a personnel door, to be able to go in and out without opening the whole set of doors. 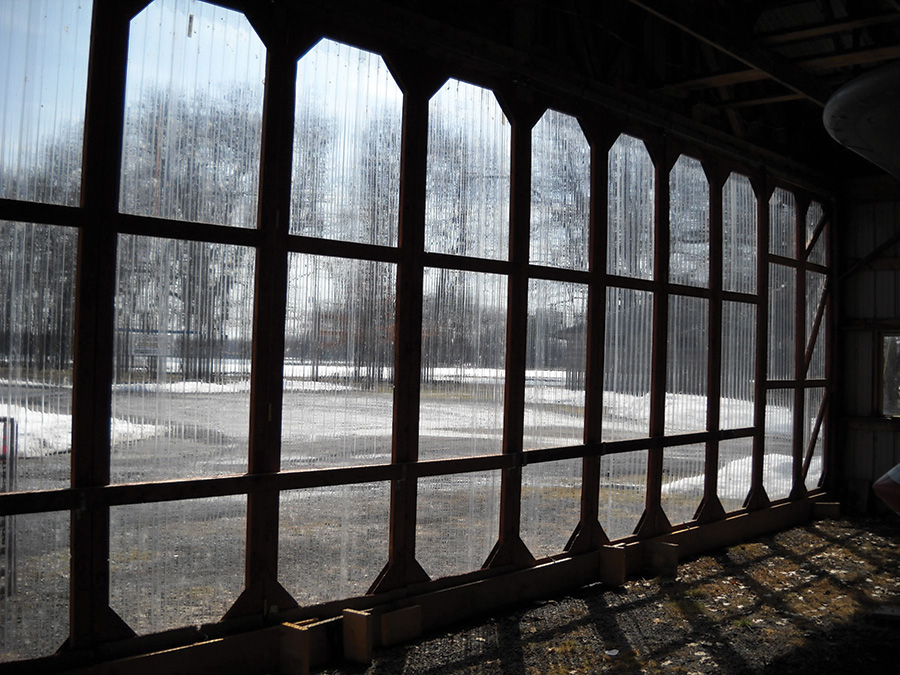 With a southern exposure, even winter sun will raise the hangar’s temperature by 20 to 30 degrees.

After getting the doors all together, erected and working, I had to think about what to cover them with. I considered using steel, but then I discovered 12-foot sheets of clear plastic at Home Depot, originally made for greenhouses. The clear plastic is a corrugated polycarbonate called Suntuf and is virtually unbreakable. In fact, it has a lifetime limited warranty. The website is www.PalramAmericas.com. This plastic is nice to work with and can be cut with tin shears. They make three different grades. I used 20 sheets of the top-grade material at $30 a sheet.

The clear plastic allows the light to come in, making the inside nice and bright. My hangar faces almost due south, so that the sun shines in during winter, heating the entire hangar about 20 to 30 degrees warmer than outside. I plan to insulate it, which will make it even warmer. I also like to start my tomato plants in the hangar. They love the warm sunshine. Had great tomatoes last year. In conclusion, when all was said and done, the hangar doors cost me approximately $2,000. 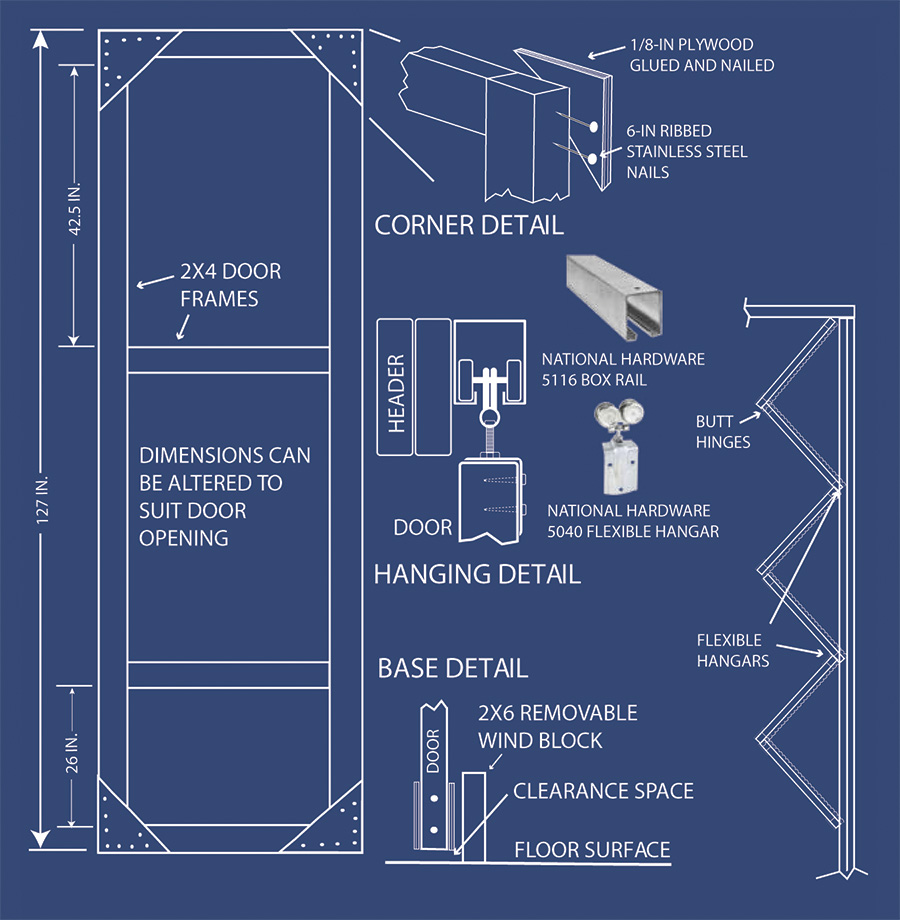 Door frames are made from 2x4s fastened with six-inch stainless-steel nails. For additional strength, eighth-inch plywood gussets are glued and nailed at each corner. Butt hinges allow the doors to fold together.

Nolan Bradbury lives in upstate New York on Oneida Lake, where he operates a marina.

If you’re not interested in actually building your own hangar door, there are plenty of commercial door choices on the market in a variety of sizes and design types.

Older T-hangar complexes often have bottom- or top-rolling sliding doors. And while these are still available commercially, for single hangar or residential hangars, there are essentially two preferred choices: bi-fold doors or swinging doors. Each has pros and cons, but door vendors tell us for small hangars, it’s a matter of personal preference and cost.

Bi-fold doors hinge horizontally across their span and require a cable or strap system operated by an electric motor to elevate them. They’re considered a good snow-country choice because the door initially opens inward, away from any snow or ice outside the door. On the other hand, the folded door exacts a height restriction, so the vertical opening has to be larger—up to two feet—to achieve the desired minimum opening. 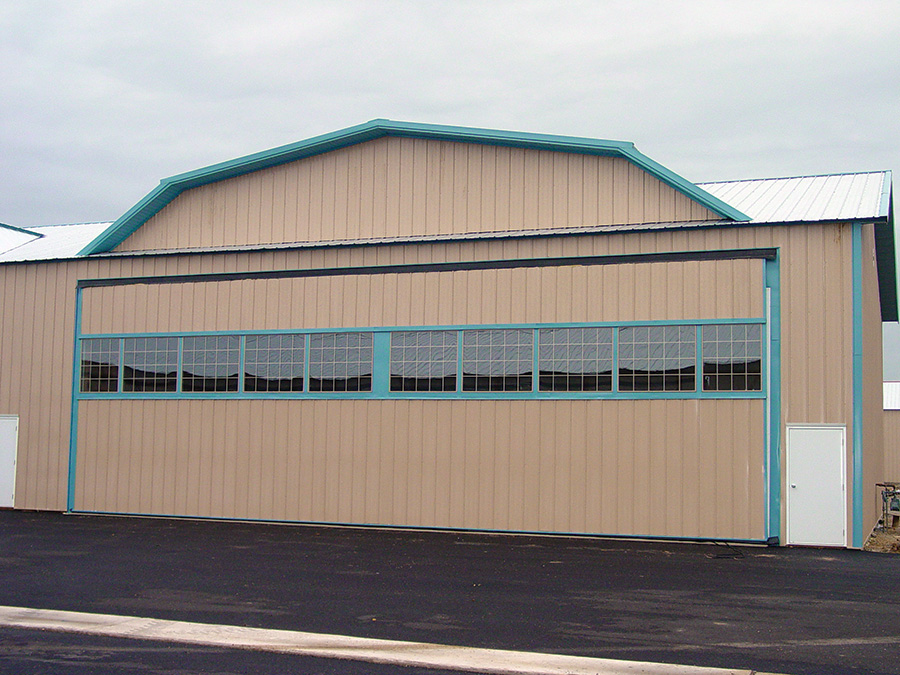 Wilson and other manufacturers offer single-panel hydraulic swing doors. This one has been fitted with unique windows and clad with material that matches both the hangar and nearby structures.

Swinging doors have hydraulic cylinders at either end and simply swing out to open, driven by an electric hydraulic power pack. A swinging door has little vertical penalty, so the hangar opening accommodates taller aircraft. Jim Davis at Wilson Industrial Doors told us the hydraulics will push snow out of the way, but it may require additional reinforcing to make the door strong enough to survive that. Also, once open, a swinging door acts like a giant sail, placing additional load on both the door and the hangar structure itself. Swinging doors typically have wind limits of 40 mph when open. And more than one owner has forgotten a parked vehicle was in front of the swinging door.

Cost wise, in smaller doors, bi-fold doors are generally cheaper by about 10 percent, according to Schweiss Doors, a well-known door manufacturer who usually shows at Sun ‘n Fun and AirVenture. Components drive the price. To carry the large span load, a hydraulic door’s framing is twice as deep as a bi-fold’s. As the doors get larger, however, the cost curves come together, according to Schweiss’s Brent Krzmarzick. 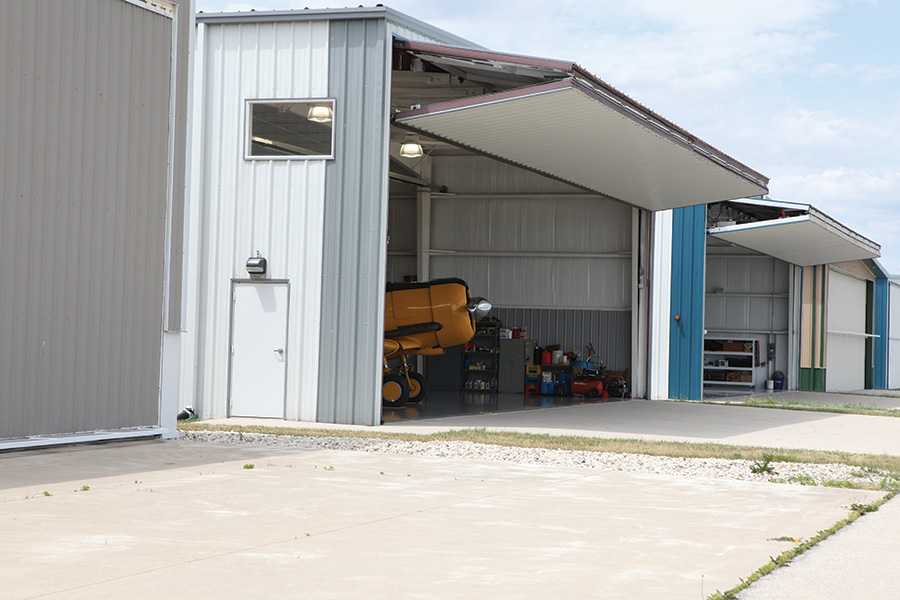 Bi-fold doors are slightly less expensive than swinging panel doors, but they exact a height penalty, so the hangar itself needs to be higher to provide a minimum opening.

Hangar doors are typically rated for 90 mph winds, but building codes in hurricane country require much higher ratings—up to 150 mph. For these, the manufacturers re-engineer the doors, adding more steel and, of course, more cost.

Speaking of which, commercial doors in the T-hangar or residential hangar size cost between $4,000 and $11,000, depending on the size, required wind loading and opening style.

For a 40×18-foot T-hangar, a Schweiss hydraulic swinging door sells for about $11,200 while a bi-fold door in the same size would sell for about $9,900. (These prices will vary with wind loading requirements and options.) Schweiss, by the way, has a unique strap system for the door elevating mechanism, while other manufacturers use a cable and drum arrangement. Schweiss claims the straps are more durable than the cable system and not susceptible to corrosion.

One way of avoiding corrosion, by the way, is to go with an aluminum door and Wilson offers those at a small price premium. These doors are also lighter and thus may require less steel in the hangar itself since the door loading is less.

“We’ve got aluminum doors out there for 45 or 50 years that haven’t rotted from the inside out the way steel doors will do,” says Wilson’s Jim Davis. “The hinge weight is not going to be as great as if you had a steel door, so usually you can use less steel in the hangar itself,” he adds.

As far as cost, aluminum doors are more expensive in the short term because they cost more to build and install. “But if you look at the overall life of the hangar, it actually comes out to be less. Some people have replaced bi-folds in steel three times versus a neighbor with just one door in aluminum,” says Davis. For Wilson, steel is a down sell, since owners building on airports with limited leaseholds will opt for cheaper construction.

“If they’re building it for a residential hangar that they’re going to keep for 20 years, they go with the extra investment in aluminum,” Davis says.

As with all hangar doors, Wilson’s pricing depends on wind loading, but he says aluminum doors for a typical 40 x 12-foot T-hangar cost between $5,000 and $20,000 and about 30 percent less in steel. However, if steel doors have to have increased structure to meet wind loading, costs may rise more rapidly because heavier motors are required to operate them. Wilson’s doors are sold without cladding, so the buyer can install wood siding, corrugated plastic or steel cladding.

For more information, refer to Wilson Industrial Doors at www.wilsondoors.com or Schweiss Doors at www.bifold.com.