I tried to fly it. That didn’t work. Then I decided to send it by train.

Thats a short summary of my lengthy attempt to transfer our Spacewalker II open-cockpit taildragger from Oregon to its new owner, Scott Dingman, in Ohio. (We needed space in our hangar for our new RV-12.) Plan A had been to drive it in a large leased truck. Thats how builder Kent Pyle of Missouri had delivered it to us in 2003. He had never flown near high mountains, and I didn’t recommend it.

After checking out the reserved truck, I devised Plan B to avoid five days of driving the hard-seat diesel for 8 to 10 hours a day. Plan B recruited neighbor/retired Air Force fighter pilot/Long-EZ driver Joe Dubner to fly with me to Ohio. He had never experienced an open cockpit or a taildragger and readily agreed to go along, even after our 2-hour shakedown flight very early on a July morning to check out our comfort level. Despite multiple clothing layers, we barely stayed warm enough at 8500 feet. 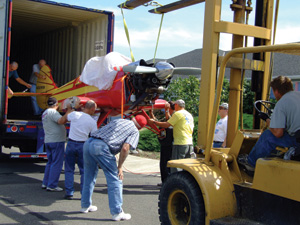 The last Spacewalker II part gets a lift into its train container.

Plan B Hits a Snag

Planning for the long flight began immediately. I ordered WAC charts. We installed a bracket and power to accommodate Dubners Garmin 296 GPS that would back up my old Lowrance AirMap 100. We checked route weather daily to get a feel for winds that would determine leg lengths. Dubner installed his ham radio APRS rig that would allow family and friends to check our progress including position, altitude, heading and airspeed in real time or in an archived file. Dubner even used the trip as a reason to buy a new notebook computer. And we sent clothing for the return trip to Dingman in Ohio. He and his wife, Corky, planned to meet us in their Europa at the last fuel stop before Dayton.

Very early on August 4-two days after my return from Oshkosh 09-we lifted off from Independence State Airport in Oregon, climbed to 7500 feet, and pointed northeast toward the Columbia River Gorge. First stop was at Pendleton, Oregon, as planned. I forgot to call home, but my wife, Lois, could see our progress on the computer via APRS. The next refueling was at Nampa, Idaho, the original home of Kitfox aircraft. Dubner and I shed several layers of clothing.

By 1 p.m. Mountain Time we were near Burley, Idaho, our destination for the day. The field is at 4130 feet, and density altitude was already above 7000 feet. On final, Dubner leaned left, and his hat whipped by me in a blur. Cords restrained his headset, and I handed it forward to him before touchdown. (A Spacewalker II pilot sits in the rear seat.)

As we stopped at Burleys FBO, the lineman and mechanic were cracking up and pointing to the airplanes tail. In a desperate attempt to save itself, Dubners favorite flying hat had wrapped around an empennage flying wire.

Glen, the mechanic, recommended hangaring the airplane because storms were forecast to roll in overnight. So we got a ride across the Snake River to a really nice Best Western motel where we were offered a ride to the airport at 5:15 the next morning with the night watchman.

The FBO guys were there, and they pointed out a strange noise in the left wing center section. Moving the wing resulted in a loud squeak and apparent slight movement between the inboard wood wing stub and the fuselage. The mechanics had no wood airplane experience and made clear they didn’t want any. I immediately grounded the airplane. We rented a car and drove the 700 miles back to Independence. It was a long day. 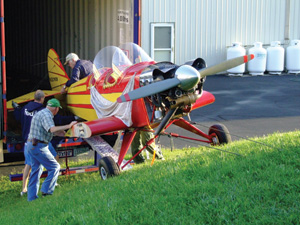 At the Ohio end, its out of the box and up the hill.

Half a week later, my neighbor Doug Davis and I departed for Burley in his truck, pulling Dubners big flatbed trailer. We got to Burley and checked into the Best Western, where the desk people recognized me. Id had the good sense to bring swim trunks for a dip in the pool.

Before noon the next day, we had the Spacewalker tied securely to the trailer. An overnight stop back in Pendleton had us home before 1 p.m. Two days later, neighbor Robin Reid found the source of the squeak and fixed it with the turn of a wrench. Reid is an airline captain and mechanic, and an expert on wood airplanes with a collection of antique planes. He flew the de Havilland Comet replica to AirVenture/Oshkosh last summer and demonstrated it.

After cutting an inspection hole in the fabric under the center section, he fixed the problem in less than 5 minutes. Even the best-preserved wood shrinks with time, and the center section spar of this 16-year-old Spacewalker is laminated aircraft plywood. A steel weldment from aft of the carry-through spar near the fuselage to the trailing edge farther outboard triangulates this area of the wing center section. The wingwalk, which has accommodated every pilot and passenger who has boarded the airplane, is above this area. Reid tightened a slightly loose nut and checked the one below it on the bolts that attach the triangulation weldment. I added an inspection ring and plate plus some cosmetic work and soon had the airplane back to solid airworthiness.

Contemplating the waning summer flying weather, I wondered if the airplane could be shipped by train. It could. Union Pacific put me in contact with a list of intermodal companies (a term new to me). These trucking firms transport train containers between customers and train yards. A 53-foot train container would show up at my hangar, we would load the plane, and it would be on its way by rail. Price: $2295, which would be less than truck rental, fuel, and five days and nights of motels and food. I signed up.

I had a carefully choreographed, color-coded and diagrammed loading plan. The truck driver was amused to find himself picking up an airplane in a residential area. My over planning mostly worked; we were through loading in less than an hour and a half.

Dingman found me affordable round-trip airfare and great lodging in Dayton. My plan was to help put the Spacewalker together, test-hop it and give him a front-seat checkout. He and Corky met me at Daytons airport on the day the container was supposed to arrive. It didn’t because the driver ran out of legal drive hours. But Big Blue and its trucker were at Dingmans small airport early the next morning. A group including six of Dingmans friends coaxed the Spacewalker out of its roomy travel accommodations. By noon the team had the wings on, and after lunch we made the airplane ready for its Ohio debut test flight. I then put Dingman in the front seat for a flight, after which paperwork was completed, and the airplane was his. Whew! Im hoping to avoid another odyssey like this one any time soon. 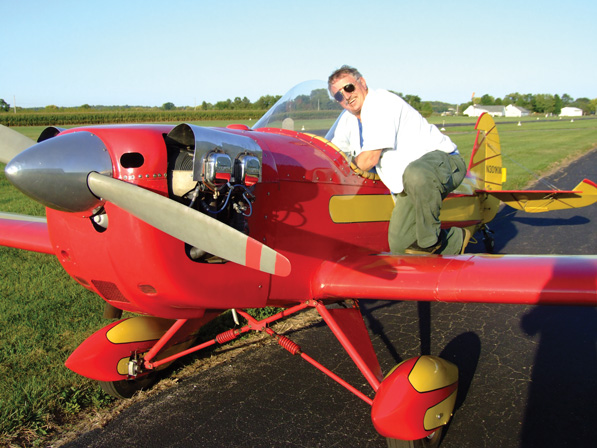 Near the end of the day, Scott Dingman takes possession of his new airplane.

Dave Martin served as editor of this magazine for 17 years and began aviation journalism
evaluating ultralights in the early 80s. A former CFI (airplanes, gliders, instruments), hes
flown more than 160 aircraft types plus 60 ultralights (including a single-seat, no-basket hot air balloon). Now living at a residential airpark in Oregon, he flies his new Vans Aircraft RV-12.

Jim Weir - September 20, 2012
0
You need never again be greeted by a dead battery because you left the master switch on. With a few dollars’ worth of parts, you can build a simple alarm system.