I would bet that all of you who have built an airplane were constantly asked the same question: “When will it be finished?” Over the years and through my own multiple projects, I’ve learned to answer “next Tuesday.” I doubt any of them were ever really finished on a Tuesday, but some may have flown on a Tuesday. However, I have learned one thing that they all had in common: No matter what day they first flew, they were never really finished.

Now don’t get me wrong by that last statement. In no way am I implying that I flew un-airworthy airplanes. Many of you have probably come to the same conclusion. Over the course of flying, there are always some new things that pop up over time that beg to be added to the airplane. Sometimes it is just a new piece of equipment such as a GPS or a new style tailwheel, and other times it could be something major like a completely new instrument panel or a change from a fixed-pitch propeller to a constant-speed one. If you keep them long enough, then big maintenance items like overhauls even come into play. And truth be told, many builders actually miss the building process, and the constant tinkering helps scratch the itch without having to take on another huge project.

The freedom that we have with amateur-built aircraft to be able to make changes without having to wait for STCs and approvals also makes it much easier. Any person can work on Experimental aircraft during the course of the year, with the only requirement being that either the holder of the repairman certificate for that particular aircraft or an A&P can perform the condition inspection. Of course, any alteration that is considered to be a major modification affecting flight characteristics may require a call to the local FSDO and subsequent time back into Phase I. Check your operating limitations for clarification.

During the past year I’ve made a few modifications to my RV-10 that I want to share with you over the next few columns. I get a lot of questions by current builders and owners about various things they are considering, and while I don’t intend for any of this to be product endorsements per se, I hope that by sharing my thought processes and the results of my decisions, it may help in yours. This RV-10 is now the highest-time airplane I have built and owned, just crossing 1000 hours in six years, so some of the changes were by choice, and some, such as the top overhaul, were actually needed.

By now you have probably seen my article on the panel upgrade I did early last year, which consisted of Advanced Flight Systems (AFS) touchscreens with an Avidyne IFD540 Integrated Flight Deck, replacing the stalwart Garmin 430 I had used for years in both the RV-10 and previous airplanes. I must say that I have been really pleased with both of those decisions. Rob Hickman and his team at AFS continue to make constant refinements to their systems as well as releasing free updates to the user base that are completely user installable. One of those new features had to do with Wi-Fi and interoperability with ForeFlight. It is really amazing now to be able to flight plan at the kitchen table and then upload it to the airplane directly from the iPad. And with the next Avidyne release, we are supposed to be able to connect to it as well. By the way, the communication is bidirectional, so if you make changes on the AFS screens while in flight, you can push it back to the iPad. I find it really handy to make any ATC-given changes on the iPad and then push them over to the touchscreen once I’ve verified it is correct. It prevents the autopilot from taking a wrong turn when least expected. 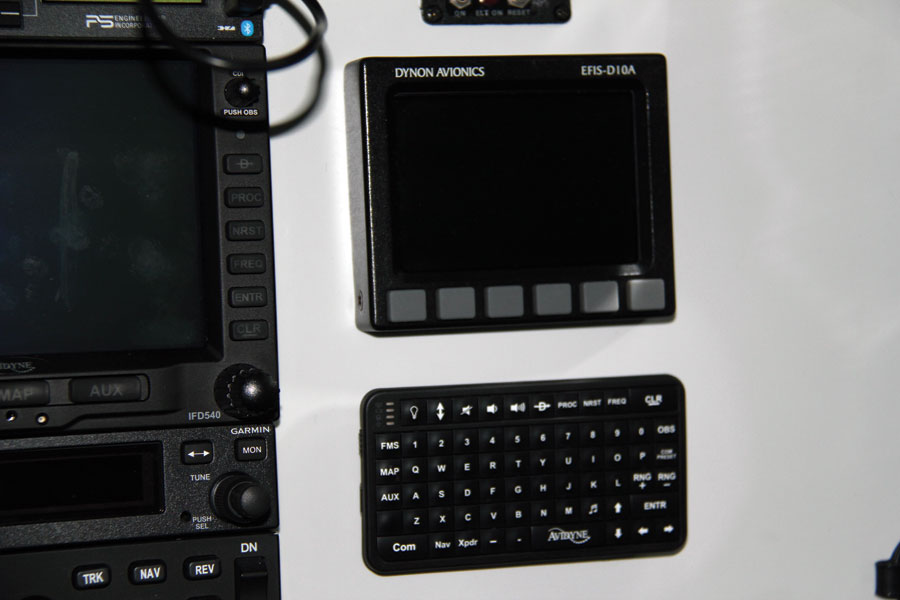 I am very pleased with the reliability and capability of the new panel. Look closely and you will see the new Bluetooth keyboard.

Avidyne has also issued a new release since I installed the IFD540, and they as well continue to add new features, such as a Bluetooth keyboard. The keyboard is a little smaller than an iPhone 5, so I keep it velcroed to the panel. It really makes small work of entering long and complicated flight plans, especially those with Victor airways. And just like AFS, the releases from Avidyne are user installable and presented with very detailed step-by-step instructions. Personally, I hope the practice of user-installable releases becomes more pervasive throughout the industry. I hated having to take my Garmin 430s to a dealer over the years to have them updated, as I think it is an unnecessary time sink and presents an opportunity to break something, such as dropping it.

Another item I added was the auto-trim module for the TruTrak Sorcerer autopilot. It really never bothered me that I had to manually trim it before, even though sometimes we would get a lot of audio “trim up” or “trim down” messages in rough air. But after installing a number of panels for customers and test flying them with the auto-trim feature, I realized how nice it was. And sure enough, I do enjoy having it now in my own airplane—although Carol has commented that at times it doesn’t seem to be as smooth as I was. I haven’t decided yet if I should let her continue thinking I’m such a great pilot, or I should tweak it. 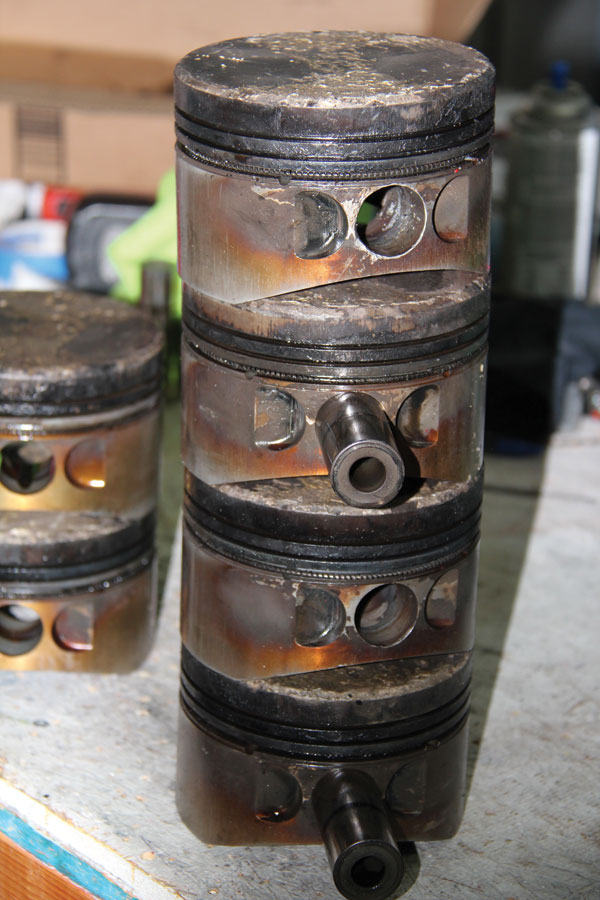 Here are the old pistons as removed from the engine. The piston pins on some were quite hard to remove, requiring a piston pin removal tool.

The hardest change I have done to date, without a doubt, has been the top overhaul. This is due to a couple of factors. The first one is that I am really busy working on customer airplanes. I now understand the old adage about the cobbler’s children, as I find myself having to steal time to work on my own airplane. The second factor is that doing a top overhaul, especially by yourself, is really hard work. Holding those 30-pound cylinders in one hand while trying to insert the piston pin without pulling the pistons out of the cylinders was back-breaking. At least for me it was! The chiropractor was certainly my friend when that project was finished, which consumed about 60 hours over the course of a week or so. You can read all the details on page 28 of this issue, but suffice it to say that I replaced the Lycoming cylinders with Superior Millennium cylinders and Ly-Con NFS 9:1 ceramic-coated pistons, primarily due to high blow-by, which was causing really black oil.

While I didn’t enjoy having to perform the overhaul at less than 1000 hours, I am very pleased with the results. The cylinders broke in rather quickly as evidenced by the temps dropping within 30 minutes on the first flight. I now have over 100 hours on them, and I never see over 380F on the hottest cylinder during climb-out. I broke the cylinders in with Phillips X/C 20W50 mineral oil, which seems to be the recommended choice these days for cylinder break-in, and then changed to AeroShell 100w+ at 50 hours. So far, so good. The engine definitely feels stronger at takeoff, and the cruise numbers sure are nice to see! I’ve been carefully running at 75 ROP so far, but will start leaning more in the not-too-distant future. 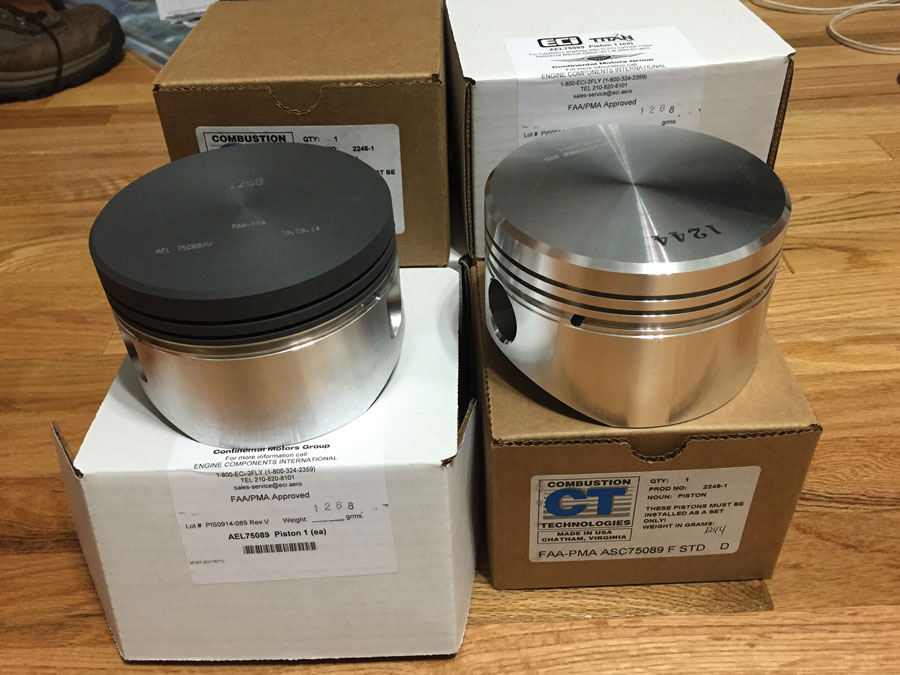 Here is a comparison picture of the stock ECI pistons (right) that came with the Millennium cylinders and the NFS ceramic-coated pistons I installed. The NFS pistons were balanced within 1 gram of each other.

But what’s really been cool is that I have actually picked up about 3 knots. Honest! For sure I picked up about 7-8 knots after the overhaul, as that was one of the convincing signs for me that the cylinders were producing less power—my cruising TAS was 4-5 knots less than when new. I had always flight planned for 165 knots, in both this RV-10 and my last one, and I usually saw 166-168 depending on how we were loaded. Before the overhaul I was seeing a pretty constant 163-164 KTAS. Now I am seeing a constant 170-171 KTAS, and yes, I have verified it with the GPS triangle. The only other thing I changed was adding a new MT propeller, replacing the old one only because it was overhaul time and they screwed up the overhaul. I’ll go into that in next month’s column.