There’s no doubt we have a strong economy in the U.S. right now, and I certainly see it reflected in the increasing number of prebuy inspections I am asked to perform on amateur-built aircraft. A fair number of those inspections are on uncompleted kits as well, and they seem to be selling due to life changes as opposed to selling for financial reasons.

Since the run rate of “failed” inspections seems to be holding at a constant 30%, I thought I’d spend some time sharing a few ideas with you in the hopes of reducing that number. Why? Well, I really hate it when the buyer is excited about a potential airplane purchase and then walks away due to problems discovered on the inspection. Usually, both parties end up disappointed, and it takes the joy out of an activity (flying) that is supposed to be fun, especially since amateur-built aircraft are really toys for which fun is the primary purpose. Of course, the FARs tell us that they are for education and relaxation, but that is another story.

Having a tire like this bald one doesn’t give anyone any confidence in the aircraft, especially for a potential new buyer that most likely will be doing lots of takeoffs and landings initially. The new nosewheel tire presents a different picture altogether.

So let’s start with the initial conversations between the buyer and the seller. The buyer should be pointed with the seller about his/her wants and desires for an airplane. If the buyer wants a solid airframe that he/she can reliably count on to fly trips, then the discussions should center around maintenance practices on the airplane. A thorough review of the logbooks should be completed, and it is during this discussion and logbook inspection that red flags can be detected early on. I have seen logbooks that have only one annual entry denoting the condition inspection was completed. Really? When I query about any other maintenance being done, I am told that yes it was done, but they’ve heard one shouldn’t make any entries in logbooks other than the required entries. While I am not a lawyer, I really think this is totally bogus advice. Personally, I think it’s better to show that maintenance was performed in the event of a mechanical failure. But that aside, it’s nice to see documentation of maintenance, if for no other reason than to understand the history of the airplane. 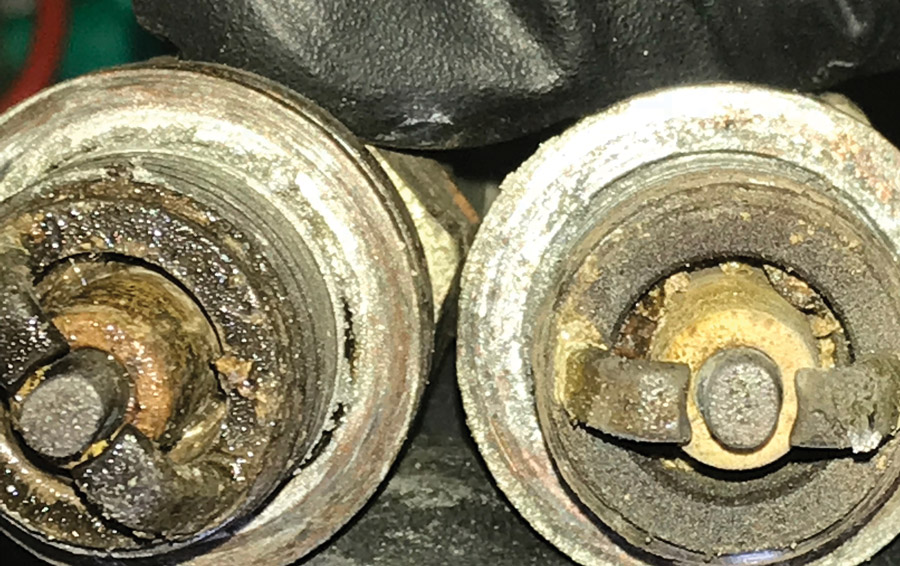 Spark plugs with this much lead in them typically haven’t been cleaned in a while. The gaps are large, and the electrodes are worn. These are easy to take care of prior to a prebuy inspection.

The other documentation that is important is the builder logs, not only for the airframe, but also for the engine, prop, and accessories. It’s good to know if the engine was built from new or if it was a local overhaul. Many engine accessories have time limits on them as well. As an example, Slick magnetos have a 500-hour service interval, and for engines with an impulse coupling on the magneto, that is a service interval that should not be overlooked.

That being said, with scarce entries it’s hard to tell when routine maintenance was performed. Things such as spark plugs, filters, wheel bearings, hoses, brake pads, brake discs, etc., all have either life limits on them or maximum wear dimensions that should be checked. Many of the kit manufacturers, and even engine manufacturers, are very good at regularly publishing service bulletins. Some of those are minor, but sometimes they can be safety related. Things such as missing spar bolts, fuel pump and/or carburetor float bulletins are really important, and compliance with them should be well documented. The majority of buyers that I see are making the jump from certified aircraft to amateur-built aircraft, and documentation is important to them. Representing the aircraft as an Oshkosh award winner when, in reality, it has been through multiple owners and has been neglected with maintenance can be a real disappointment to the buyer when they show up. Be honest and upfront with the buyer if that is the case. Tell him/her that you’ve adjusted pricing accordingly, but do recognize some things need attention. 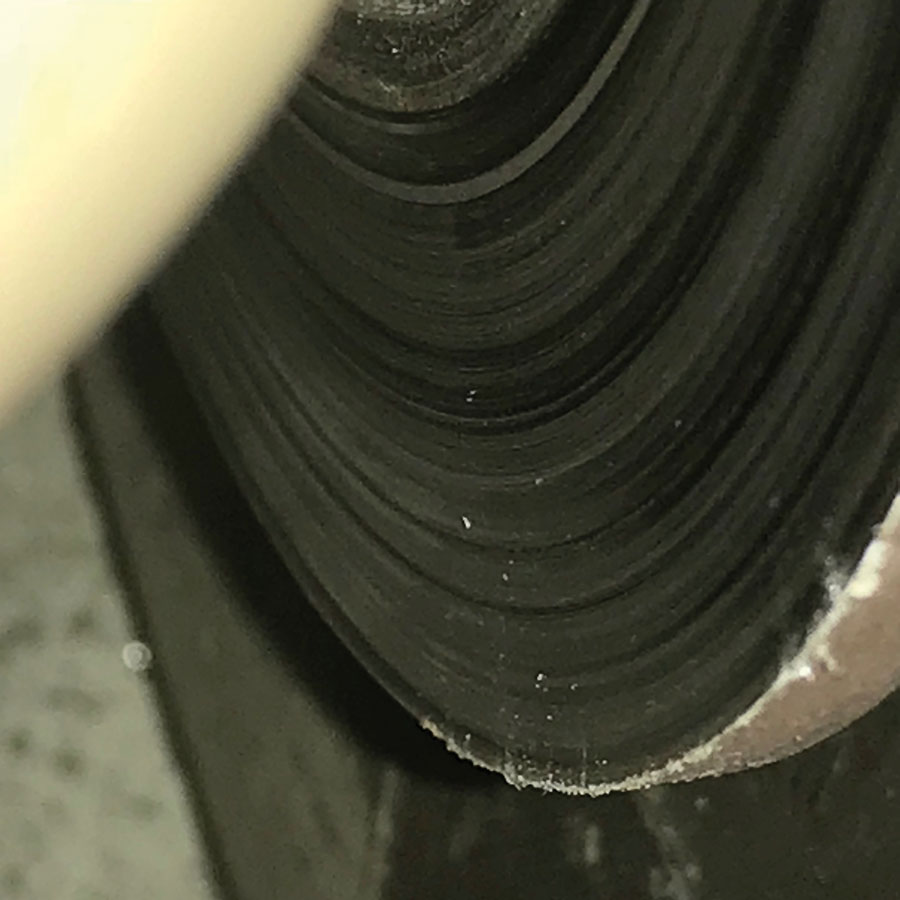 A brake disc with grooves that look like the rings of Saturn is not exactly confidence inspiring. This disc was on a 24-year-old RV and was close to exceeding the wear limits posted by the manufacturer. Grooves this deep are usually caused by the brake pads being worn down to the rivets.

The majority of the successful inspections and sales I have been involved with all have some common threads that I’ve noticed. As with anything that is for sale, it all starts with the presentation, whether it is over the phone or in person. If the documentation is sparse or haphazard, it is usually a bad sign of things to come. One of the very first things I look at when I arrive is the organization of the hangar. It’s been my experience that if the hangar or workshop rivals a federal cleanup/hazardous waste dump project, then the airplane usually follows suit. Let’s face it, our airplanes can be dangerous toys if not properly constructed and maintained. If organization and attention to detail is not one of your strengths, you probably shouldn’t be building or maintaining an airplane. So, if you are selling, take a look around your workshop or hangar, and at least use the sale as an excuse to clean up. You may even find some parts you’ve been looking for! I’m not saying that a beautiful shop will hide an ugly airplane, but it at least gets things off to a good start.

Once you’ve got the shop cleaned up, start with the airplane. It should be clean, too, from the prop blades to the belly, and everything in between. Completing the cleanup with a coat of automotive Final Finish or equivalent can sure make a difference. You might even decide you want to keep it!

It’s disappointing to me when I see airplanes that have an engine compartment and belly that look like they haven’t been cleaned in years. Yes, many engines do normally leak some oil, but there is a distinct difference between leaking oil and accumulated grime. Interestingly enough, we sign off the condition inspection as in accordance with FAR part 43, which says the engine should be washed down each year. More than a few of the aircraft I have seen clearly hadn’t had that done. It’s very easy to tell which airplanes have had proper inspections and the right amount of TLC. 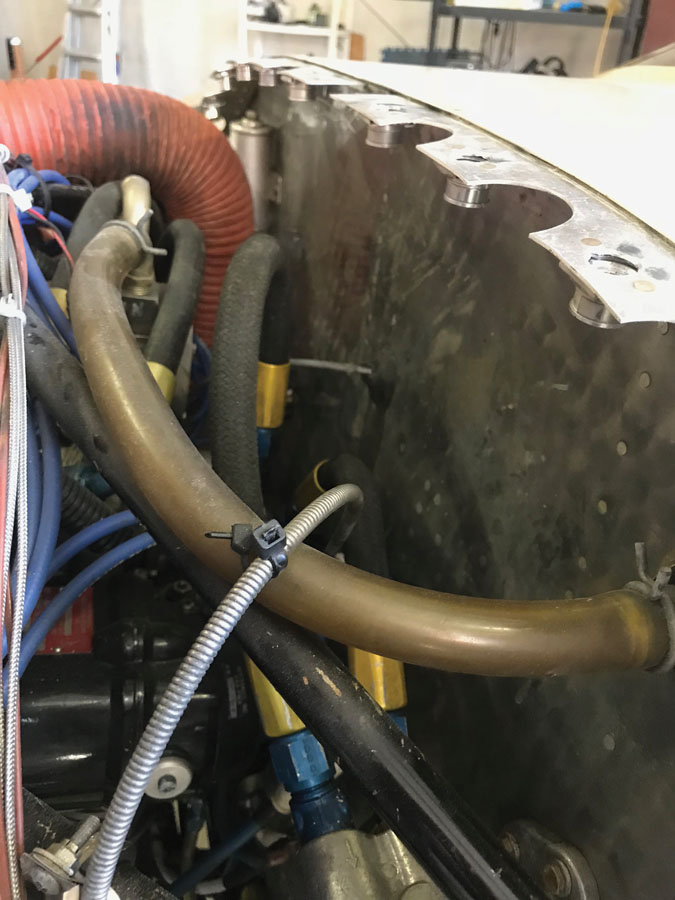 Hoses in the engine compartment should be checked for aging and brittleness. In this case, what looked to be the original vacuum line hose was over 24 years old and very brittle.

Don’t exaggerate any characteristics of the airplane because the discrepancies will be ferreted out by any reasonable inspection. Most recently, I had a seller tell me the spark plugs were in great shape and he never had any lead fouling. When I removed the lower plugs to perform a compression check, I discovered two different types of plugs, and there was so much lead and oil in them that they may have fouled on the next flight. When I asked what’s up with the two different plug types, the answer was that he hadn’t seen them and didn’t know why, yet it was his signature in the book for the last four condition inspections.

As a seller, you might consider performing a compression inspection yourself prior to the visit. It could save everyone from a bad experience. On a recent compression test that was reading 28/80 pounds, I discovered a burned valve clearly visible through the borescope. The air hissing out of the exhaust pipe during the compression test was a sure sign there was a potential valve problem, and we could have held off on the trip if it had been discovered ahead of time.

This particular airplane had just about one of everything unlabeled: switches, light, knobs, and circuit breakers! It was represented as an Oshkosh award winner, which it certainly was at one time. Even the wiring hanging down shows years of multiple owners and neglect.

While checking things over in the engine compartment, pay attention to life-limited items, such as hoses and magnetos. I’ve been seeing way too many airplanes that were built in the ’80s and ’90s that still have the original fuel and oil line hoses!

Tires and brakes are another area that gets neglected way too often. Many times it can be attributed to the tight-fitting wheel pants that really need to be removed for a thorough inspection. But whatever the reason, inspecting them prior to a sale should be paramount. So why do you think tires and brakes can be a factor? Well, think about it. What does every new owner of an airplane want to do first? Takeoffs and landings, of course, followed by rides with friends and family! So the last thing they want to do is to be saddled with replacing tires and brakes right away when they get home. So, be a good seller and take that item off of the table. I am not telling you as a seller that everything should be like new on the airplane. I am just recommending that the things that could play an emotional factor in the buying decision should be addressed. Wear and/or maintenance items that could impact the new owner’s enjoyment will play a role unless the buyer is looking for a project.

Engine controls are supposed to be labeled as to their function and operation.

Another item I find annoying is having unlabeled switches, lights, or circuit breakers in the panel. I know it’s easy to find ourselves changing things over the years that we own an airplane, and being amateur-built aircraft, anyone is allowed to work on them and make minor changes. That shouldn’t stop us from using best practices. Take the time to look at your airplane with a critical eye, from a buyer’s perspective, and most likely you will uncover some things that you didn’t notice as a builder/user. A good idea would be to download an inspection checklist from the internet on your particular airplane. Find one that you haven’t used before, as it may cause you to look at things in a different way. When you are finished, if you are the builder, you could even sign it off as a fresh condition inspection. If done properly, it will put the fun back into the sale. 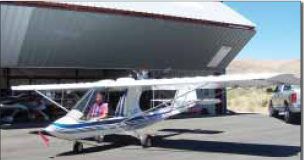 Jim Weir - October 17, 2008
0
In this first of a two-part series, Jim Weir builds a low-cost, high-efficiency portable ground-based antenna system that he used to great effect in the recent CAFE 400 (fuel efficiency) race in Northern California. You can do it, too.