Last month we introduced AERO-Classics’ two lines of Lycoming-style oil coolers. This month we’re taking a closer look at the relative efficiencies of their standard cooler—AERO-Classics calls it a Remote Mount—compared to their newer High Efficiency line. 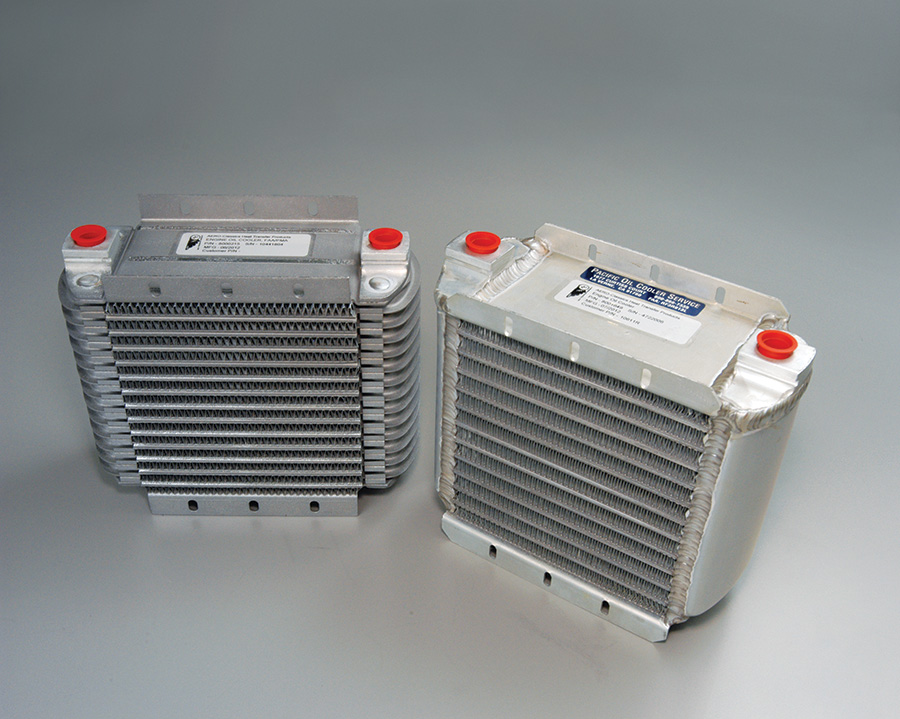 As noted in the earlier article, AERO-Classics’ Remote Mount cooler is patterned after the popular Harrison or NDM (Niagara) design. This is a drawn-cup cooler with a moderate number of cooling fins and a reasonably-friendly price tag. AERO-Classics’ High Efficiency coolers just as faithfully follow the bar-and-plate design pioneered by Stewart-Warner (now Meggitt). Their main claim to fame is greater fin area for increased heat rejection. They’re also mechanically stronger and more expensive. 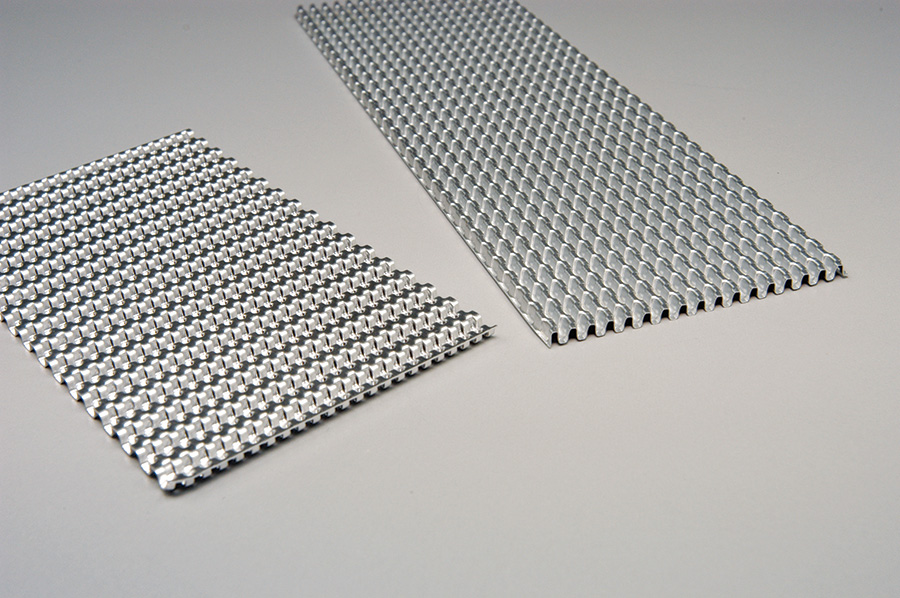 Turbulator plates differ between AERO-Classics’ drawn-cup design (left) and the bar-and-plate unit (right). These plates are sandwiched tightly on their top and bottom, forcing oil to pass along or through the plates in thin streams. This exposes more oil to the cooler’s surfaces. The drawn-cup turbulator uses thousands of small holes; the bar-and-plate cooler has no holes, relying on an S-curved flow pattern. 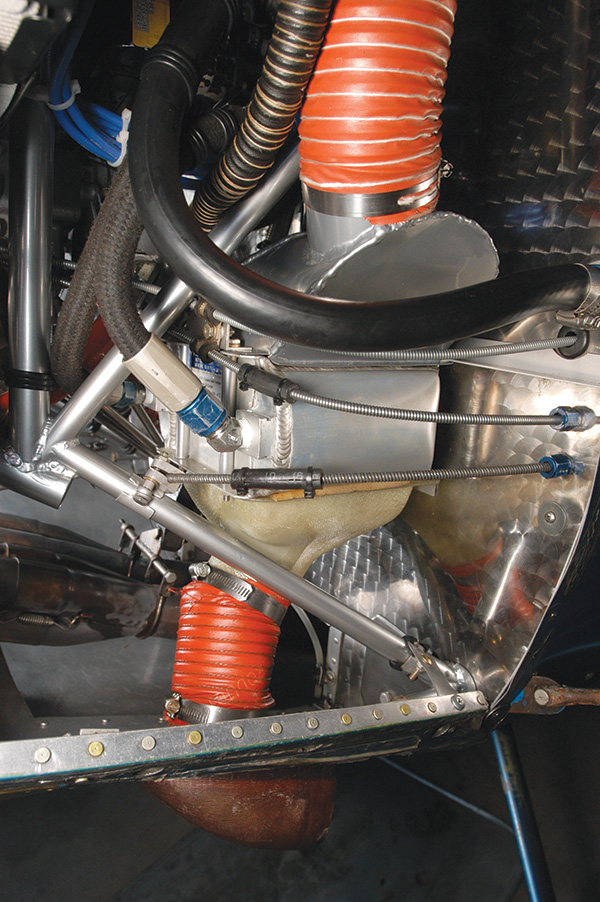 Swapping the bar-and-plate cooler resulted in almost no visual change, but the bar-and-plate’s minimally-taller cooler height (firewall to hose fitting dimension) meant enlarging holes in the top and bottom air ducts, re-rigging the mixture cable for greater length, adding anti-chafe protection to the throttle cable and fiberglassing a small notch into the lower air collector to avoid fouling the engine mount leg.

Because we have a Starduster Too with a Ly-Con hot-rodded 540 and a penchant for warm oil, we agreed to swap our existing AERO-Classics standard Remote Mount cooler for their equivalent High Efficiency model. We’d like to say there is a huge amount of data to draw on in making a selection such as this, but there isn’t. The main reason is because there are so many variables surrounding oil coolers and their installation. It’s just not practical—even for the experts—to accurately predict what will happen in each case. Therefore, real-world back-to-back tests are of interest.

The data AERO-Classics has from their in-house oil cooler test rig shows the High Efficiency cooler definitely rejects heat faster than their standard Remote Mount units. That would be fine with us, as our 300+ horsepower 540 clearly generates plenty of BTUs in need of shedding. A fairly new, 50-hour-old installation, the 540 benefits from tight baffle seals and has responded to a few engine cooling tweaks such as fitting a lip to the cowling exit. (This lowered CHT and oil temps, indicating an undersized cooling exit.) 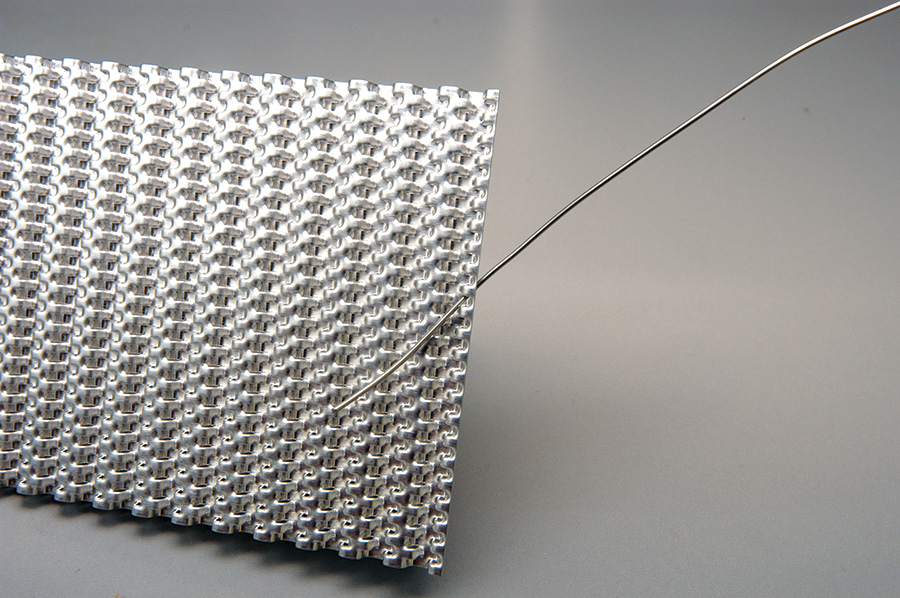 Passing 0.032-in. safety wire through the drawn-cup turbulator plate is possible only on the end row where the holes in the plate can be approached at an angle. Forcing oil through thousands of these tiny holes obviously takes power from the engine’s oil pump, which is one reason to run only as large a cooler as needed. Bar-and-plate turbulator plates do not have these holes and are inherently less restrictive to oil flow.

In the short term, altitude has been our friend, but we’ve been slowly approaching our goal of 185° F oil in winter and 205° F in summer. And having just test-hopped AERO-Classics’ High Efficiency cooler, we can say the HE cooler was worth a 5° F drop in our installation. More improvements should come with continued improvement in airflow to—and out of—the oil cooler. 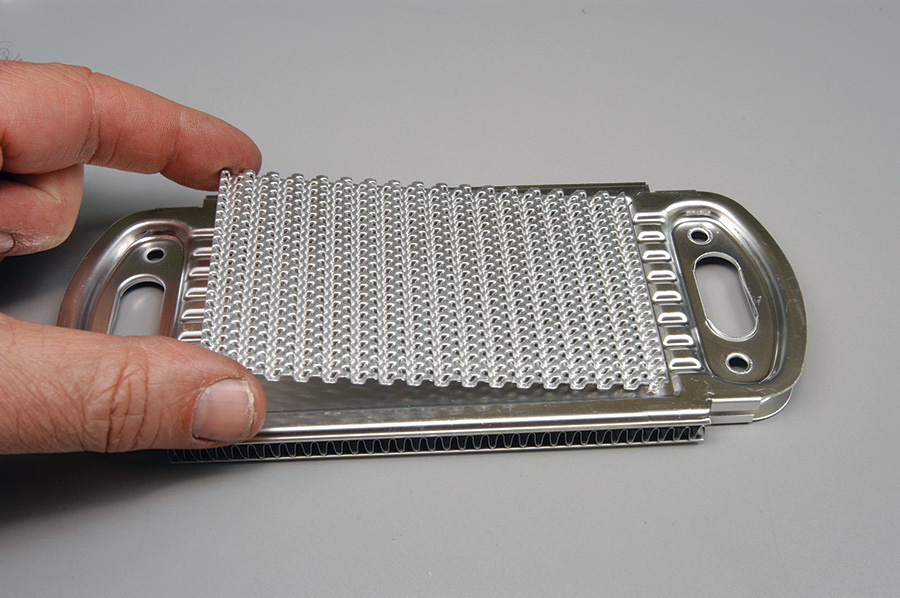 Drawn-cup coolers are built by inserting a turbulator plate onto the stamped cup section. Oil passes from the larger oblong holes at each end of the cup section; the two small holes flanking the oblong hole are used for alignment during assembly.

To know how the High Efficiency cooler got its name, it helps to understand how AERO-Classics coolers are built. The details are mainly in the photos, but what’s surprising is just how tight the oil passages are inside both types of coolers. Turbulator plates are common to both designs. These bounce and bang the oil through constrictive passages, the better to expose as many oil molecules directly to the surrounding aluminum housing. This transfers maximum heat from the oil to the cooler. From there, the heat is radiated to the passing air by fins packaged between the oil plates. 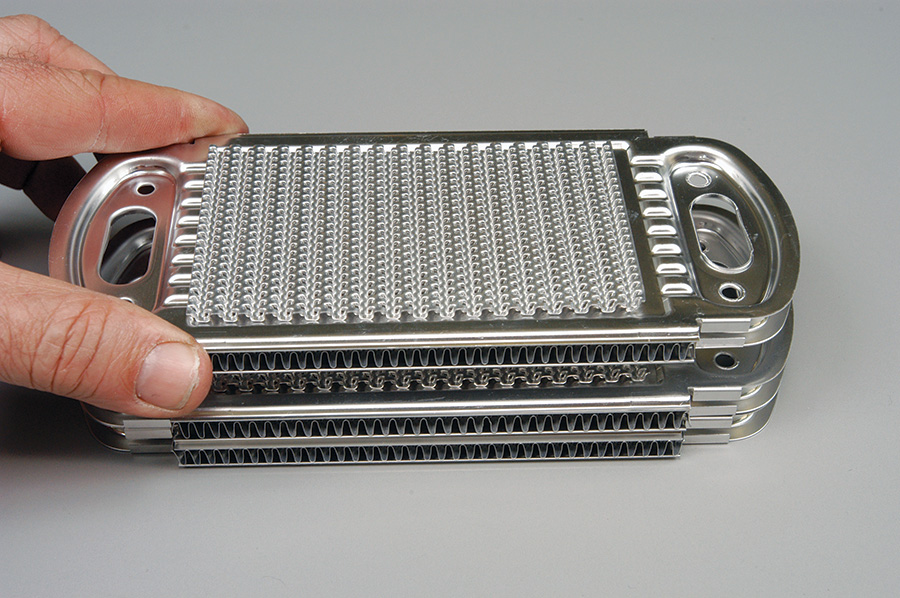 Simply stacking cups and turbulator plates is the basic building block of a drawn-cup-cooler. Typically seven or nine such rows are needed to cool a 150 to 200 horsepower Lycoming, but much depends on the installation and ambient temperatures where the airplane flies.

The difference between the Remote Mount drawn-cup and High Efficiency bar-and-plate coolers is the bar-and-plate design has a more efficient—less restriction to flow and more contact area for heat transfer—turbulator plate and many more, and taller, air fins. The result is that for a given area the High Efficiency cooler has notably more heat rejection area than the standard design; as long as it gets the same amount of air, it will cool the oil more. 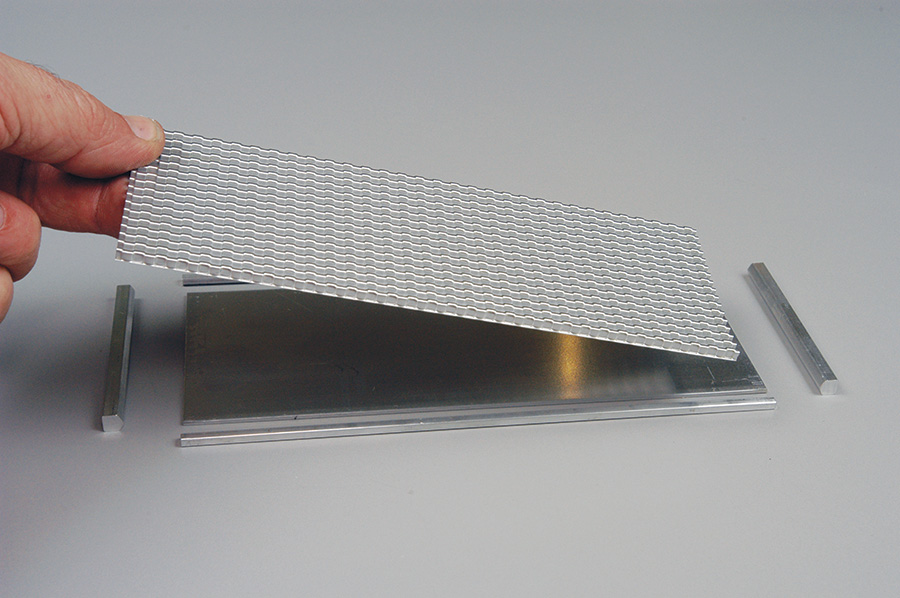 This layout illustrates the basics of bar-and-plate cooler design. The turbulator plate is being set atop a simple flat aluminum plate, while short sections of bar stock are poised to surround and capture the turbulator plate. Stacking more such bars and plates results in multiple cooler rows.

Our Starduster has been fitted with a 13-row AERO-Classics Remote Mount cooler (p/n 8000215) since the engine was built by Ly-Con about 50 hours ago. The firewall-mounted cooler is fed cooling air by 3-inch SCAT tubing. For the first 20 hours, the cooler air discharged directly inside the cowling. Then, in a test to increase both the air pressure drop across the cooler core and effectively increase the exit area of the cowling, Andy Paterson of Paterson Composites/Aberle Custom Aircraft quickly fabricated a composite exit duct. The duct discharged air through a new exit cut in the cowling and helped considerably. 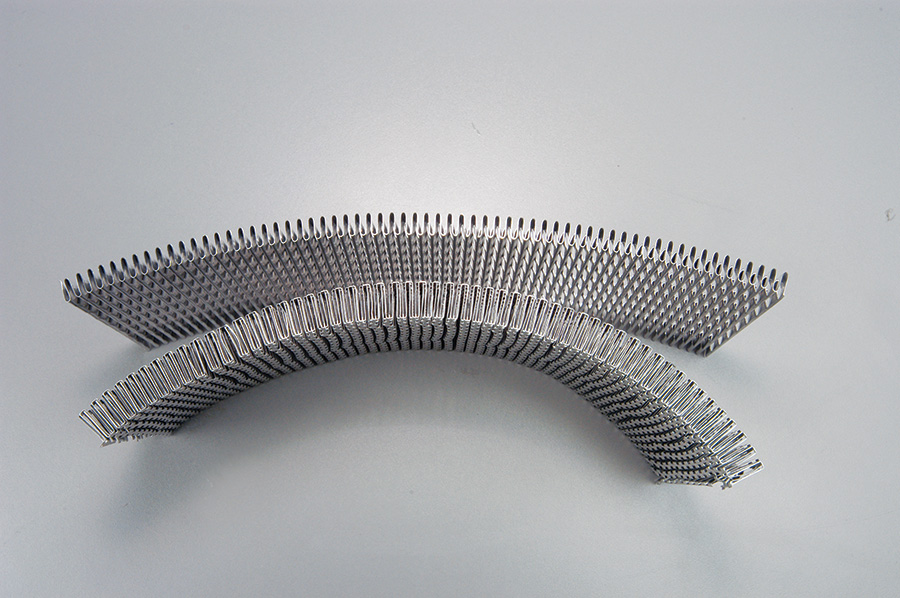 For the oil cooler test, we flew the Too at high-cruise power (24 square) for a half-hour, noting the oil temperatures as airspace and turbulence allowed. Then we replaced the Remote Mount with a High Efficiency cooler (p/n 80001649 ) and flew the same route again. Our weather luck held, giving us consistent OATs of 62 to 64° F. Other factors we controlled were oil level, rpm, manifold pressure and airspeed. We also noted altitude (which varied between 2500 and 3700 feet MSL as we maintained a consistent OAT), flight time and oil temperature. 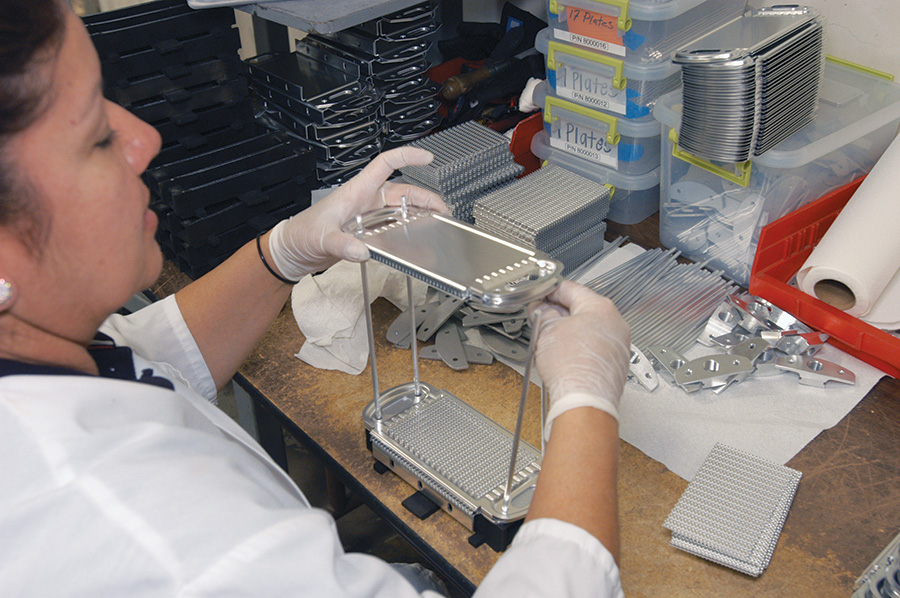 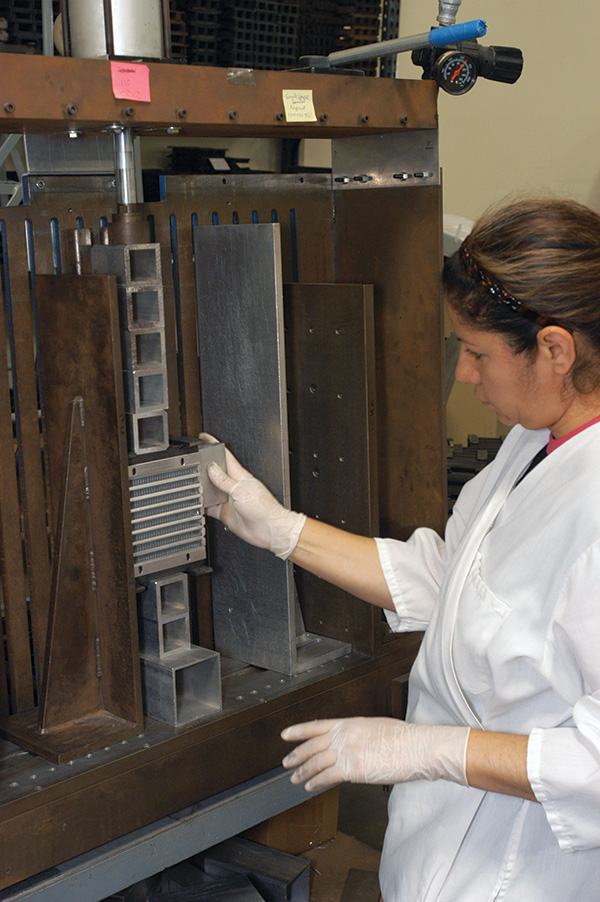 Bar-and-plate cooler cores are more tedious to assemble. The technician must hand-fit each plate, turbulator plate and bar, a stacking job done in this vertical press. Evening and squaring the assembly is done with small prying tools and gentle taps with an aluminum block. Ultimately the assembly is banded tightly together before going into the vacuum furnace.

There’s no doubt AERO-Classics newer High Efficiency cooler out-chills its venerable Remote Mount brother. For any application where packaging space is at a premium, there’s a large mass of heat to reject (large-displacement, high-powered engines), or cooling air mass is low (high altitude), the High Efficiency cooler is the logical choice. 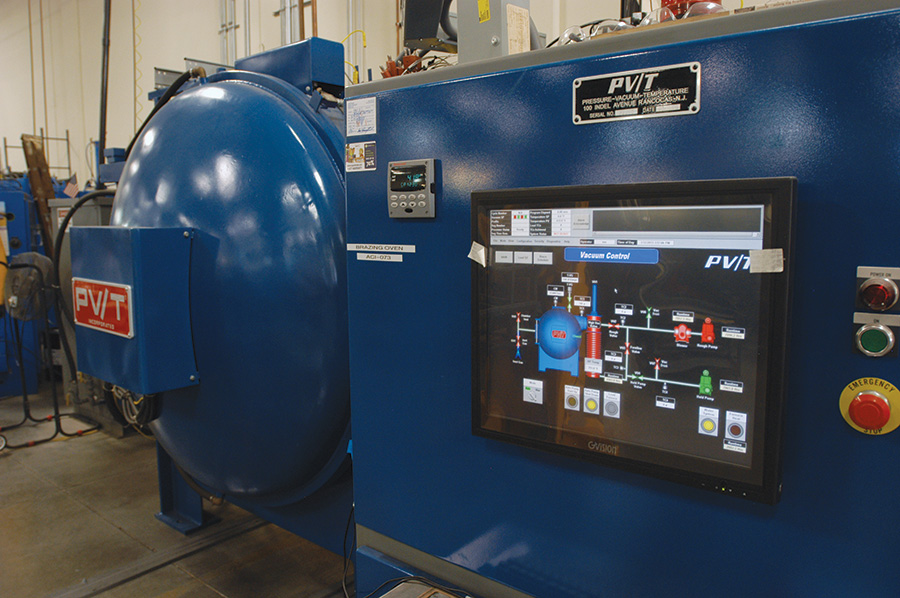 The round tank is AERO-Classics’ vacuum-brazing furnace, where loads of coolers are heated to 1100° F in a near-perfect vacuum. This melts a micro-layer of brazing material previously deposited on the cooler parts, welding them into a single unit.

But AERO-Classics is proud of their HE coolers and charges accordingly. To put numbers to it, our 8000215 Remote Mount retails for $289.95 at Aircraft Spruce, while the High Efficiency 80001649 brings $605. If you have the room, simply fitting the next-larger Remote Mount cooler could well be the cost-effective answer. 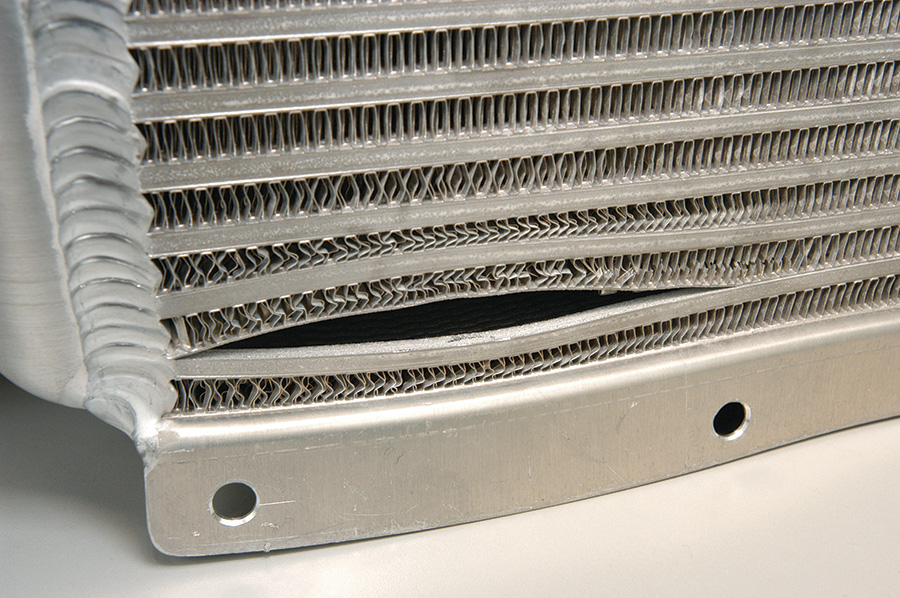 AERO-Classics pressure tests 100% of their coolers so customers won’t experience this sort of failure. This opening was likely caused by surface contamination during cooler assembly, thus defeating the brazing process. All parts are vapor cleaned before assembly, but an occasional burst still occurs in testing.

For us, the High Efficiency AERO-Classics is staying on the Starduster; there’s no room to go larger and we need all the cooling we can get. Our next step will be increasing the diameter and smoothness of the air ducting, in hopes of further lowering our oil temperatures before summer arrives. 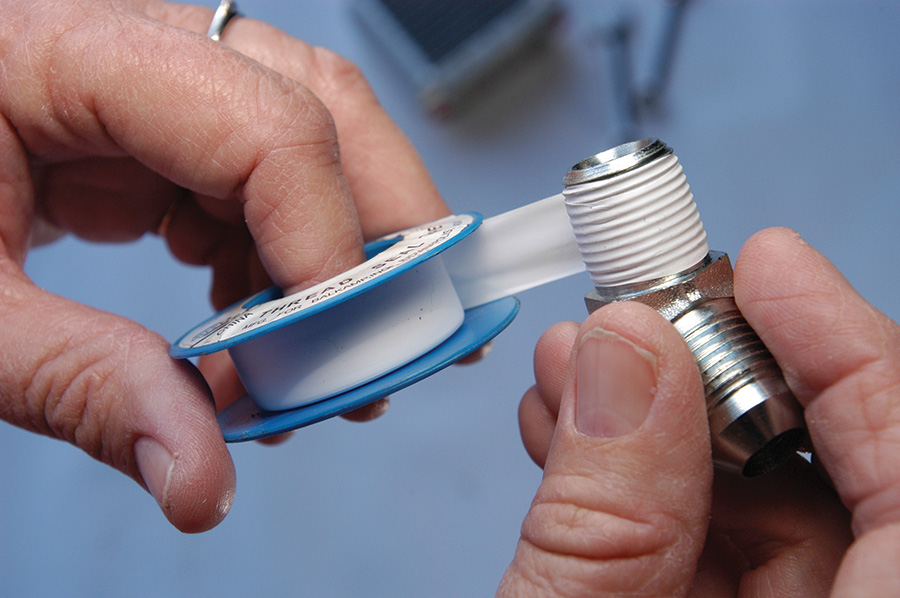 AERO-Classics insists on steel oil line fittings, saying they never gall, unlike aluminum fittings that always do. AERO advises that Teflon tape is a good thread sealant, or Loctite Red can be used for more durable applications. Loctite will require heat to remove the fittings. 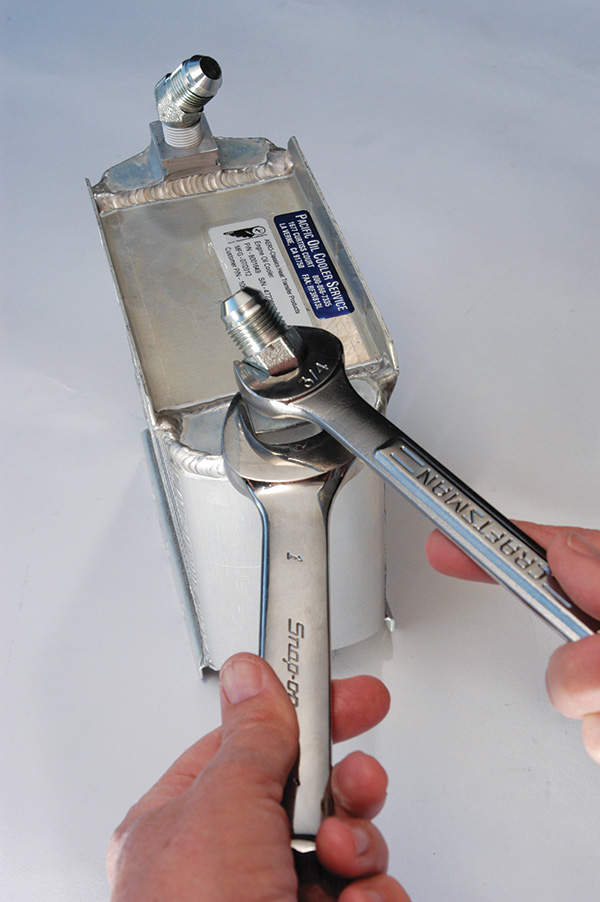 Using two wrenches, and thus supporting the cooler during fitting installation, is another must. AERO-Classics says the physically-stronger bar-and-plate coolers aren’t quite so needy, but drawn-cup coolers absolutely need a supporting wrench on the fitting boss to prevent damage to the end tank. 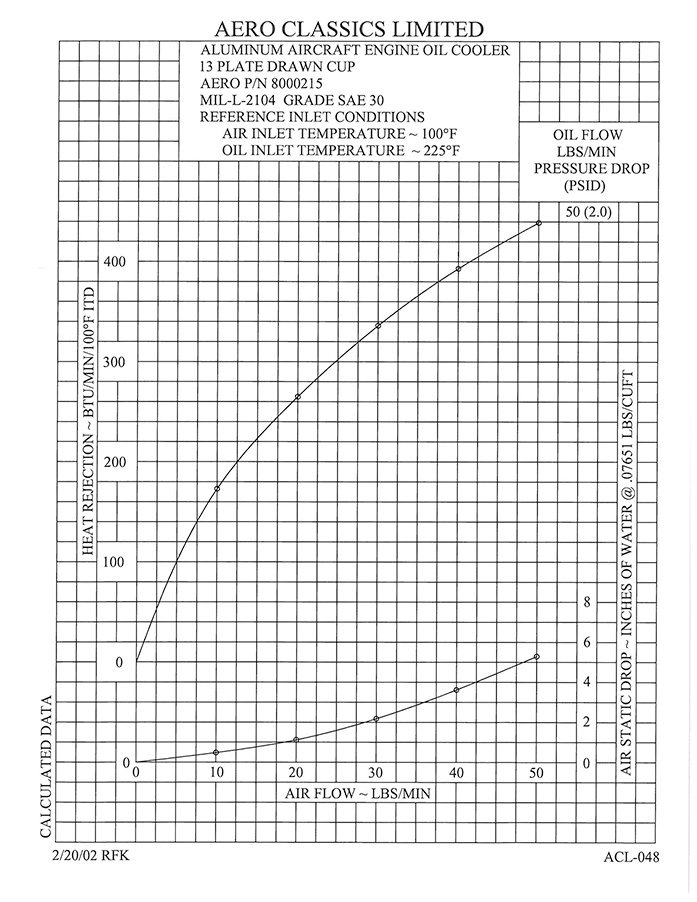 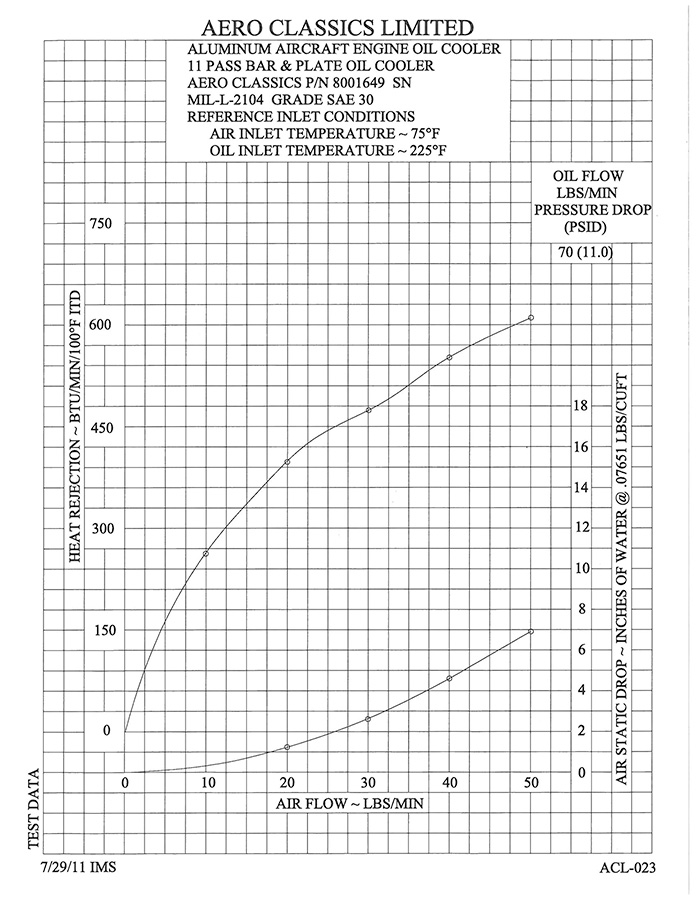 Even a casual study shows the High Efficiency unit sheds about half again as much heat as the Remote Mount, and that the High Efficiency’s denser air fins are slightly more restrictive to airflow, but not significantly so. It also suggests airflow to the cooler in our Starduster is restricted and we should now turn our attention to improving it.