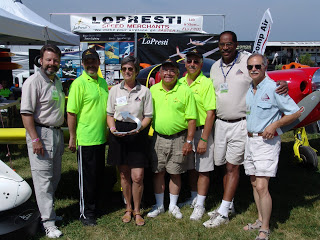 LoPresti Aviation has announced the winner of the first annual Roy Lopresti memorial “Innovation in Aviation Award” to DeltaHawk Engines for their development and refinement of heavy-fuel piston engines over the last 12 years. The late Roy LoPresti made significant aerodynamic improvements to light aircraft during his career, including the Grumman American line of singles and twins, the Mooney 200 and 300 series, the LoPresti (Swift) Fury, and even contributed to the Lunar Lander. His life’s work of developing refinements for GA aircraft continues to this day by LoPresti Aviation.

The much anticipated DeltaHawk engine line is a liquid-cooled, inverted V4 design that burns Jet A and develops between 160 and 200 horsepower. Dry weight is claimed to be 330 pounds. According to Doers, DeltaHawk engines will be undergoing the FAA certification process shortly, and will only be offered for sale to the public once the engine installation infrastructure is fully in place to insure that finished installations are properly performed.

Doers accepted the award during a press conference held at AirVenture. LoPresti Aviation COO R.J. Seigel said of DeltaHawk “This small company has worked tirelessly for 12 years to bring a great design to market. The persistance and creativity of this company is something of which Roy would have approved.”