In the beginning, every kit is basically a bunch of big crates full of parts. It doesn’t matter whether you are building an RV-12 or a Murphy Moose, your newest project will arrive in your driveway in a big, beautiful box.

Your first task will be to inventory everything in those boxes to make sure that you have received all of the components necessary to construct your airplane. Once you know you have it all (and trust me, you probably will put in a call to your kit manufacturer to request some inane bolt or package of screws that was left out in packing), it is time to organize your workshop and get to building. 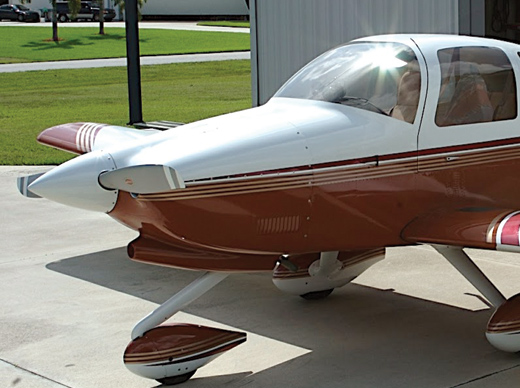 The big metal spinner and Sam James cowl mods give the nose of the author’s Van’s RV-10 a distinctive look.

That’s how it all starts. If you make it through the arduous process of construction, you should find yourself boxless but aircraft-happy at the end of the project. One day you’ll be flying your airplane, and, probably after a bit of tweaking, you’ll love it.

Then comes that first or second fly-in, where you’ll park your beloved aircraft on the line with maybe a half-dozen or more variants of the same kit, and the comparisons and knowledge swapping will begin. You’ll notice the blue one has different air intakes than yours, or a totally different system for latching the cowling. The green one over there might have sweet recessed door handles. And the orange one? It has air conditioning and dual LCD screens for gaming in the back seat. That’s when you may find yourself comparing notes and salivating over the latest mods that could make your airplane a bit finer than all of the others. 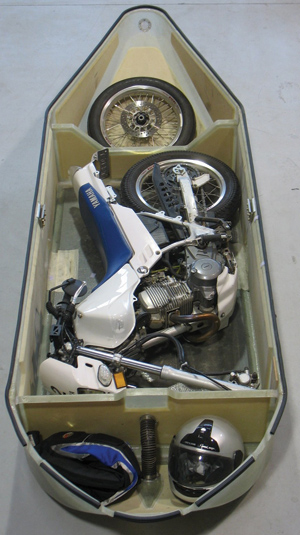 The Motopod mod allows you to carry a full-size motorcycle with you for transportation everywhere you go.

This is the curse of the kit airplane builder. Due to sheer exposure, whether at events or via online forums such as the Matronics listserv, (www.matronics.com/listbrowse) you may be left wanting to make a few improvements. This is one of the ways kit aircraft rapidly differentiate themselves from their original design and from others of the same type.

Builder/owners want their machines to go faster, farther or higher, or just run more efficiently. Their passengers want to be more comfortable and suitably distracted on those long, high flights to faraway destinations.

Every kit builder has his favorite mods. Some of these correct issues with the original design, but most are add-ons, accoutrements and just generally good sense. A few aren’t smart at all.

I only have experience with the two wildly different kits my husband brought home: a two-place taildragger Kitfox IV and a four-place trigear speedster, the Van’s Aircraft RV-10. Both of these aircraft are fairly custom at this point.

It’s easy to point out my favorite mods. The Kitfox got a new engine, the Jabiru 2200, an 80-horsepower, direct-drive, four-cylinder model, in 2000. I love it now. But for the five years it took to work out the kinks in the systems, find the right cylinder heads and plenum for cooling, and reform the cowling to work with it, I hated it. The engine-airframe combination was so bad in the beginning that we routinely walked the airplane to the runway after Sun ‘n Fun because it wouldn’t idle that long without overheating. A fine Sensenich wood two-blade propeller (76 inches) and all the aforementioned mods have turned the engine-airframe combination into one that works extremely well.

A few years later our daughter expressed an interest in learning to fly. My husband and I are both flight instructors, but we weren’t comfortable teaching her in an airplane with bungee gear that would not accept much of a side load. Student pilots are notoriously hard on landing gear, so we changed out the Kitfox IV’s traditional landing gear for Grove’s one-piece spring-aluminum landing gear. This was a mod that just worked from day one. The gear is designed to bolt right onto the hard points already on the airframe fuselage and are rugged like Cessna 150 landing gear. About the only thing lost in the deal was an inch of ground clearance with the propeller, but there’s still 17 inches.

What is my fantasy mod for this airplane? A Rotec 110-horsepower radial engine, but that’s not going to happen in my lifetime. It sure is pretty, though, and makes a great sound.

The RV-10, befitting its complexity, sports many more mods that take it away from factory stock, and not all of them are favorites (though for the moment, all of them work).

Anyone following this column knows that our RV-10 sports a Sam James cowling and wheelpants. We like these wheelpants because they are easier to remove and replace than the stock wheelpants. We dislike them because they are low to the ground and require custom chocks (we carry our own) and are not good for flying off of grass. The nose wheelpant is a little wider than stock, and just wide enough that a “universal” tow bar doesn’t fit well, which means the airplane cannot be towed easily into a parking space when we are on the road. I either do a lot of pushing or demand that the FBO marshal me into my long-term parking spot.

The cowling is marvelous because it slopes down just a bit more than the stock cowl, offering better visibility over the nose. It also looks great with the round air intakes and the big metal spinner on the prop. The cam-lock latching system is rugged and works better than the stock “piano hinges.” That said, it took us five tries to get the plenum and air-intake/air-outflow system to cool properly—five tries over three years, or maybe four. I’ve lost count. Sam James has recently decided not to sell the mod for the RV-10 anymore. He provided excellent customer support to us, so we have no beef with him. I just think these cowlings, derived from his successful line of cowling mods for the RV-6/7/9, did not scale up well. James still sells plenums for the IO-540.

While we were building, the issue of RV-10 doors popping open and departing the airplane became quite real. The latching system was originally seen as one of the primary culprits. The human verification system, however, ultimately seems to be the issue. Van’s Aircraft has provided a service bulletin on the subject, so the original stock latching system also remains suspect. Many different solutions for the problem were developed, from magnetic door “closed” sensors to three-point locking systems. Some, such as the Plane Around kits, include longer pins plus the third, bottom tongue-in-groove lever and a 180° travel.

We decided to change the nylon blocks that the door pins thread through to aluminum ones, which are honed to guide the pins into place. We also left our door-pin rods slightly longer so that they’d have a little more grip. We added secondary rear handles for pulling the doors closed, as well as simple straps to help snug the forward portion of the door to the fuselage. Finally, addressing the human issue, we created a checklist that ensures the doors are latched. My verification system is my hand—I can touch each door pin after the door is latched because we’ve left those side panels off of the interior finish in the airplane as a nod toward function over form. There is nothing more reassuring than actually touching the door pin in its latched position.

At least one other mod, the axle on the nosewheel, should have been completed before our airplane ever flew. The stock nosewheel configuration on early RV-10 kits had issues. We subscribed to the Matronics list, so this was not a state secret. Still, we didn’t change out our axle. Maybe it was because we were eager to finish, and we were so close. But looking back now, it was just stupid. There was a known issue and we didn’t address it, and the nosewheel bearings froze on the first takeoff, meaning that the nosewheel did not spin on the first landing, ruining the tire. Frankly that landing was a testament to the strength of the nosegear, even though the damage that ensued from the landing required replacement of the fork, axle, wheel and tire. We got the front axle mod from Matco. Since then, we’ve dealt with shimmy issues at certain taxi speeds. We recently relieved some of the material on the seal between the wheel and the bearing to combat that, and we’re testing that now. So far, so good.

These aren’t the only customizations we’ve made on our airplane that move it away from stock equipment. Other mods include Electroair electronic ignition and subtle changes to the cabin-heating system. We use TCW’s Safety-Trim system for both our elevator and rudder trim, and TCW’s backup battery system (www.tcwtech.com). 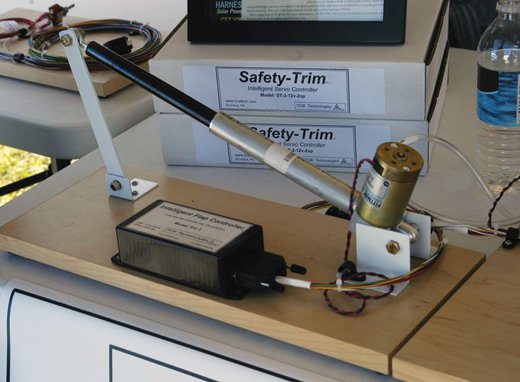 The author did not like the original trim system on the RV-10, so it was modified for both rudder and elevator, with the TCW Safety-Trim system.

What We Won’t Do

We probably won’t be seen with air conditioning, any fancy overhead panels or a permanent oxygen installation. We definitely aren’t interested in adding outboard fuel tanks, either. (The airplane’s range is about what we can tolerate.) There will be no built-in LCD panels for gaming in the back seat. Our passengers are welcome to bring along a tablet or iPad for that. And I don’t anticipate installing eyeball vents back there, either. I guess we won’t be winning any static display awards, but that’s OK. I want to keep our airplane light and simple, and all of the mods I mention add weight or complexity, or both.

The more complex the airplane, the more mods you can find for it. I researched more than two dozen common mods for the RV-10, and another dozen uncommon ones. I bet if I’d had more time I could have found a dozen more—and all of them are flying on airplanes out there in the world. But is customizing your aircraft the best way to go? Our experience suggests both yes and no.

Almost every manufacturer you talk to at a fly-in will tell you the stock aircraft is perfect for your needs. But we know that’s probably not true. Generally, the kind of person who will build an airplane wants it to be just a little different, just a little better than everyone else’s. That is their nature. Most of the mod-makers, by the way, are kit builders who believe they’ve found an improvement. Are they all truly improvements? That’s for you to decide.