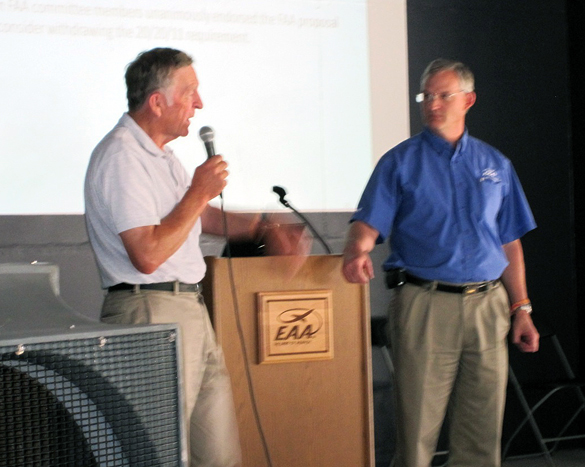 Dick VanGrunsven (left) and the EAA’s Earl Lawrence answer questions from the forum audience at AirVenture.

At a forum held today at AirVenture, the EAAs Earl Lawrence outlined changes to the so-called 51% Rule. While no FAA personnel were on hand, Lawrence said he was given the green light by the agency to talk about the substance of the new rules, which are expected to be published in the Federal Register on August 17. As this is written, the final rule has not been signed, but Lawrence indicated that the paperwork is basically in its final form now, and no substantive changes are expected.

Well cut to the chase: Its generally good news.

After receiving a torrent of commentary last year at Oshkosh, the FAA went back to the drawing board and agreed to reconvene the rulemaking committee made up of industry and the FAA. The new rules, which will be in final form (there will be no more comment periods), are expected to clarify a lot of issues that were muddied by the first round of proposed changes and, industry insiders agree, successfully curtail the excessive use of commercial assistance while not endangering legitimate individual builders.

Chief among the expected revisions is the elimination of the 20/20/11 idea. In last years efforts, the FAA said it wanted to see 20% of the assembly work on any Experimental/Amateur-Built kit to be performed by the builder, as well as at least 20% of fabrication; the remaining 11% could be either. Moreover, the FAA had made the definition of fabrication much less clear than it had been, and it could have been construed as having to mine the boxite to create the aluminum to build a wingskin. The new rules are much more rational and acknowledge that much fabrication in modern kits is along the lines of finishing or final-prepping a part; the new rules are expected to give credit toward fabrication for this kind of process.

These new rules will be wrapped into a single new Advisory Circular, which will contain substantial guidance for builders. In addition, the previous checklist that received so much criticism-it gave equal weight to finishing a trimtab as to building an entire engine-has been substantially revised and will be parsed so that each operation can have a 0.1 percentage qualification. Before, either the builder got all the credit for the operation, or none; the remaining credit could go to either the kit manufacturer or to commercial assistance. Under the new rules, its expected that builders will still have to list which processes were performed by the kit maker, the builder (both as assembly and fabrication) or by commercial assistance. Kits started before the implementation of the new rules are expected to be grandfathered so that they must only comply with the rules in place when the project began, though Dick VanGrunsven, who was on the advisory panel and spoke at the forum, indicated that the new rules are clear enough and just liberal enough that most builders wont see much advantage in using the older rules.

Finally, the FAA is expected to revise the language in the forms the builder signs confirming he built the majority of the airplane-for the purpose of increased enforcement of the rules going forward. In addition, anyone who assists in the construction of the airplane-including other non-paid builders-must be listed in the paperwork; there’s no way to hide commercial assistance.

This is a complex issue, of course, so look to KITPLANES to provide full interpretation of the rules after they are published. 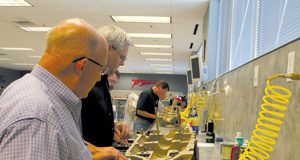