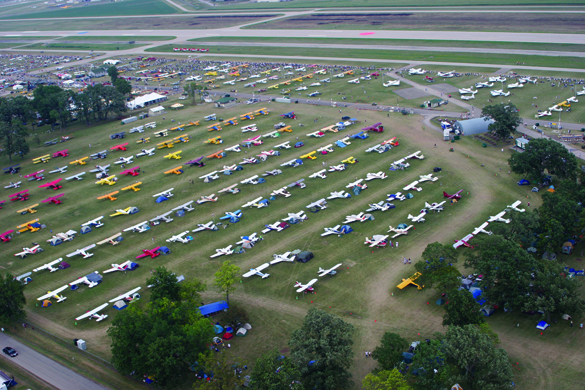 There is a long tradition of under-wing camping at Oshkosh, regardless of weather.

It occurs to me that there are two Oshkosh rain modes. The first kicks in when rain erupts with a certain amount of warning after a beautiful airshow day, one that began with no hint of precipitation. The midday rain crowd shifts into indoor exhibits, huddles under wings and sprouts ponchos, and even stays for the Doobie Brothers concert on Monday evening.

And then there’s the Wet Beginning mode, when dedicated Oshkoshers wake up with rain already falling, but head out into the show grounds anyway. Many, of course, are homeless vagrants residing in the campgrounds, already damp from their makeshift accommodations. We’re here, we’re without fear, and we will not be denied. Heck, it might clear up later…

Dick Knapinski, EAA’s ever-ebullient media spokesman, announced at his briefing Thursday morning that full dust-control measures are in effect today, as a steady drizzle poured off the roof. The diminished crowd of hard-core attendees went into buildings to shop under cover, and many of the days events were shifted to dry alternatives. The yearly “Meet the Administrator” gathering with the FAAs new chief, Captain Randy Babbitt, was already set up at noon for the Honda forum building. Showers persisted until mid-afternoon, moving out in time for the usual white-puffy airshow skies.

Barnaby Wainfan - May 20, 2016
0
Deciding to use a fixed-pitch propeller or step up to the higher weight, cost, and complexity of a constant-speed prop in order to improve performance.