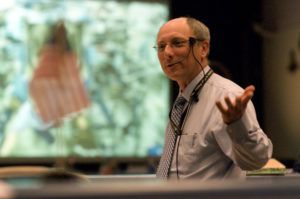 While I was at NASA, I did some pretty futuristic things—launching humans into space, building a space station, and watching the world go by from the center seat in Mission Control, just as if I were sitting on the bridge of the Enterprise. Little did I know that when I joined KITPLANES®, I’d become involved in something even more remarkable: time travel.

As I left the space center at the end of January, the March issue of the magazine had just been mailed to our subscribers and had been completed two weeks before that. But I had written the lead RV-14 flight review article back in September. As readers were getting their first look at the March issue, the KITPLANES® staff was deep into preparing the May issue.

The point is, given these long lead times, although my name first appeared at the top of the masthead for the May issue, I was still working at NASA while the content decisions and layout were being done. So some thanks are in order. Veteran Belvoir editorial director Paul Bertorelli kept the ball rolling as I climbed the (very) steep learning curve of magazine publishing. Paul was also responsible for making sure this rookie got credit for much of his work in June, which actually got started in the middle of February, when I officially came on board. (Are we dizzy yet?) So as you can see, time travel, or perhaps just time shifting, is the norm in a magazine like KITPLANES®, and sometimes it can get confusing. By the way, is it AirVenture time yet?

The point to this look inside the mechanics of magazine publishing is this: In the age of the Internet, we often get anxious when it takes more than 30 minutes to read the latest breaking news. World events and press releases come at us at the speed of light, and if we don’t hear the latest gossip until the next day, we feel cheated. But a magazine like KITPLANES® moves at a different pace. It’s not our job to be a newspaper. In fact, other than new products, we don’t even have a news section up front as many magazines once did. We expect you to get your breaking news from our web site—or our sister web site, www.avweb.com—so we don’t need to expend effort in printing a few pages of information of interest only to archeologists.

Our goal is, instead, to provide you in-depth and solid coverage of a different sort. Our flight reviews, for instance, will tell you much more than how an airplane flies. Since this is a magazine for builders, we’ll go into depth on the nature of the kit (or plans), the company behind the design, and any special features relevant to building, owning, and maintaining the airplane. We know that our readers are interested in more than just how it flies, they’re looking at something in which they will invest a lot of time and energy before they ever get to fly it. Our goal is to be that information source, and if it takes a little longer for the information to get out, so be it. We want to give you the quality reporting upon which to base sound aircraft-building decisions.

In order to bring you that information, I am happy to introduce a new member of the team, Mark Schrimmer, our new managing editor. It will be Mark’s job to bring each issue together and make sure that what you read is accurate, complete and lucidly edited. Mark comes to us with decades of publishing experience, but more important, he is a pilot and homebuilder himself. I am used to working with a strong team of professionals, and I’m confident that Mark will be an exceptional Executive Officer for KITPLANES®.

While we’re talking about the team, let me point out that our contributors are what make this magazine happen—and those contributors are also our readers. I would like to invite and encourage everyone involved in the homebuilding world to share their ideas and stories with us. We all started out with a single article in the magazine, and I anticipate that the future growth of our team will come from someone who submits their own first article. You can send those stories and ideas to editorial@kitplanes.com, and they will be read.

Last, I want to offer a big thanks to our departing associate editor, Suzanne Bopp. Suzanne has toiled tirelessly behind the scenes to bring KITPLANES® to fruition each month, and we will miss her consummate professionalism in keeping all the cats headed in the right direction. We wish her tailwinds as she moves on to her next adventure.