Some of you may have noticed that there has been a lot of engine coverage in recent months. This is a natural byproduct of the buyer’s guide season, but it’s also a deliberate strategy to provide sound information about this important element of any (or at least most) homebuilt aircraft projects.

The trend continues this month, happily, in part because of the emergence of a new and promising series of engines from UL Power. In what became sort of a theme for this issue, the engine is featured not only in the Zenith CH 650 B flight review on Page 8 (the CH 650 B is powered by the UL Power 350iS four-cylinder engine), but also in Marc Cook’s Engine Update column on Page 52, where he discusses the engines in more depth.

Tom Wilson walks us through how to get more out of an engine in his article, “Efficient Engines,” on Page 18.

While we won’t always have the opportunity to provide this many stories about powerplants and how to use them, we’ll enjoy the trend while it lasts.

Occasionally something slips through the cracks, and you bring it to our attention. I mention this because we have received comments from a few people about the design and typography of this publication. Mostly, they have expressed dissatisfaction with the font selection and size, or the use of type on a colored background. In short, legibility issues. And if a few people are taking the time to contact us about it, it stands to reason that others may be thinking the same thing.

When this magazine underwent a redesign several years ago, the changes were not undertaken lightly. We considered not only appearance, but also who would be reading it and how it would be used. We sought to find a solution that allowed us to fit as much information in the magazine as possible while also maintaining reasonable readability for the spectrum of audience we serve.

We tried different type sizes and fonts and leading (the space between the lines), and you’d be surprised at how a small change affects the flow of text. A minor increase in leading in a two-page story, for example, may promise improved legibility but can add nearly a column to the story’s overall size. So we settled on a compromise, and that is what you see today. Perhaps down the line we’ll refine or retune, but for now we think it serves our purposes well.

As for type on a colored background, we will be more mindful about what effect various color combinations have on legibility. Sometimes we have been thwarted in our efforts by printing issues that are beyond our control. But in any case, you can rest assured that we will err on the side of clarity rather than on “flashy” design. 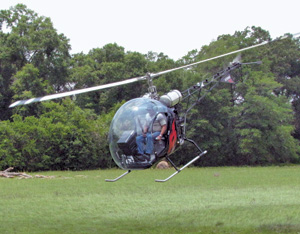 Safari Helicopters brought something to our attention recently: The “Completed” price in the February Rotorcraft Buyer’s Guide was listed incorrectly, the result of misinterpretation of the requested information on the update form we send out to manufacturers. Safari took “Completed” to mean “Ready to Fly,” as opposed to what it is intended to mean, which is how much it would take to complete the aircraft from a kit. So, to clarify, the kit price for the Safari 400 is $149,800, and the ready-to-fly price is $185,000. According to the company, “If you build the helicopter yourself, you will have everything in the kit to complete it. There are no additional costs.” Other than your time, of course.

Last month, as a follow-up to the Alternative Engine Buyer’s Guide, we promised to run Pat Panzera’s article about considerations for installing an auto-engine conversion. There wasn’t room this month, so look for it in the next issue.

We also received a note from Dave Klages letting us know that he had forgotten to include the name of one of the pilots who flew formation with the group for his article “Wingtip to Wingtip” in the April issue. Eddy “Fast Eddy” Tohikian was flying the RV-8 with the yellow trim.