We ask a lot of spark plugs. Not only must they provide a powerful spark at all altitudes and power settings, but they must also be affordable because plugs do wear out. (And were cheap.) 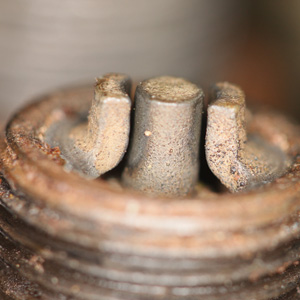 This massive-electrode spark plug was photographed after 140 hours of use. The color reveals that the cylinder is healthy. Notice how the center conductor is beginning to erode, resulting in a slightly oval shape.

Ignition systems may look to the uninitiated like three discrete pieces-the magneto, the ignition harness lead and the spark plug. In reality the pieces are a well-engineered system designed to generate an electromotive force across the air gap of the spark plug.

Before installation each new plug must be tested for the proper internal resistance. This internal resistance in each spark plug is part of the designed-in balance in the ignition system that reduces plug erosion by dissipating some of the spark energy as heat.

Plugs that pass this test are safe to install with a new copper gasket and a light coat of anti-seize compound is applied to the threads. Anti-seize should not be applied to the two threads closest to the firing end of the plug.

If the plugs cant be screwed all the way in using light pressure, the plug boss threads should be cleaned using a thread chaser. Thread-clogging schmutz is prevented from dropping down into the cylinder during cleaning-especially when cleaning the top plug boss-by putting a little grease on the thread chaser tool. 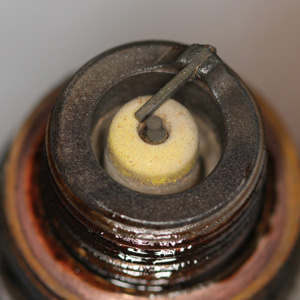 This fine-wire spark plug has been installed for approximately 110 hours. Its clean, and the color (slightly tan) indicates the cylinder is healthy. The copper gasket should be replaced after use.

Plugs need to be serviced regularly for best performance. Inspections to determine the amount of service needed are done at each annual or every 100 hours under normal operating conditions. This requires a set of tools.

The short list of removal and reinstallation tools includes a 7⁄8-inch deep socket, a ratcheting wrench and extensions that fit the socket, either a 3⁄4-inch or 7⁄8-inch open-ended wrench to remove and reinstall the spark plug high-tension leads, a torque wrench to ensure that the plugs are properly tightened during reinstallation and some anti-seize compound.

Additional tools include a spark plug rack. Fancy metal racks can be purchased, or one can be made by boring -inch diameter holes into a suitable board. All thats required for 90% of the GA engines is two rows of six holes-one row for the top plugs and a corresponding row beneath for the bottom plugs.

During removal insert each plug in the corresponding position (e.g., 1T for #1 cylinder top spark plug; 2B for #2 cylinder bottom spark plug-the cylinder numbers are molded into the engine case halves near each cylinder base) in the rack. After removal, visually inspect the plugs for damage, carbon fouling, lead fouling (which appears as small, hard glass-like balls), oil fouling and extent of electrode wear.

Carbon fouled plugs indicate that the fuel injection or carburetor idle mixture setting is too rich, or that the pilot is not practicing ground leaning at idle and taxi power settings. Oil fouled plugs indicate a worn cylinder bore, loose valve guides or annealed rings. If only the lower plug of a cylinder cuts out due to oil fouling, a short-term fix can be effected by installing a slightly hotter spark plug if one is approved for installation. Lead fouling produces hard glassy-looking balls that must be removed mechanically; these can be reduced by leaning the mixture during taxi, idle and other low-power engine operations. Correct idle mixture is indicated by a 25 to 50 rpm rise during mixture cutoff and idle speed of 600 to 650 rpm. If your engine is plagued with lead fouling problems, installing a special extended-tip spark plug (part number ends with BY) will reduce fouling.

Learning to interpret the tale of the plug is not difficult. A comprehensive guide is the Champion Aviation Service Manual AV6-R. A copy can be downloaded from the company’s web site. (See the Resources box.)

The post-removal inspection will reveal what service is needed. Lead balls (clinkers) are removed using dental picks or dental pick-like tools. Many aircraft maintenance shops use a Champion Model 2600A vibrator/cleaner for this task, but Ive gotten by for decades using picks fabricated from stainless-steel welding rods or a piece of hacksaw blade that Ive ground to fit in the gap between the center electrode, the sidewalls of the plug and the ceramic insulator.

The two types of plugs are massive electrode and fine wire. In spark plugs, as in everything else, you get what you pay for. Massive electrode plugs cost less but need more servicing and can be expected to wear out in about 400 hours if serviced regularly.

Fine wire plugs-and there are two types of these, platinum and iridium-are more expensive but don’t require the same amount of servicing as the massive electrode plug and usually last at least 1000 hours. Platinum fine wire plugs aren’t as durable as iridium fine wire plugs. But they haven’t been made since 1983, so its pretty unlikely you’ll run into them unless you buy some of the new old stock (NOS) platinum plugs sold by Frank Gurko. Gurko worked for Champion for 32 years and is an acknowledged expert on aircraft spark plugs.

As long as a plug firing end is a tan or tan-gray color you’re OK, says Gurko, when asked about plugs. He advised against the common practice of cleaning the firing end of plugs by aggressively blasting the plug with an abrasive grit. Use only aluminum oxide grit.

The less you blast a spark plug the better, says Gurko. He added that platinum fine wire plugs wear considerably faster than iridium plugs and should never be blasted at pressures higher than 30 to 40 psi. The firing end of iridium plugs and massive electrode plugs can be blasted with aluminum oxide powder at shop air pressures of 100 to 120 psi. 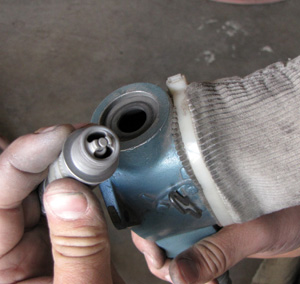 The massive-electrode spark plug has just been cleaned using a portable spark-plug cleaner. These cleaners are inexpensive and work well when clean abrasive media is used.

He went on to reinforce the less-is-just-right message by advising owners to pick out the clinkers, wash off the threads with Stoddard solvent and a stiff non-metallic brush, put some anti-seize on the threads and reinstall the plugs after rotating them. Always install a new gasket.

The All Important Gap

Iridium is very tough and its not unusual for an iridium plug to go 400 hours before gapping is required. But iridium is also brittle, and any gapping must be undertaken with care.

Due to differences in ignition lead capacitance related to lead length and charge polarity reversals inherent in single magnetos, plugs should be rotated every 100 hours or at each annual to equalize wear of the firing end electrodes. The Champion AV6-R service manual contains a plug rotation chart, but there’s a foolproof and easy way.

Lay a piece of masking tape on your workbench parallel to and adjacent to both the upper and lower plug holes in your plug rack. Duplicate the numbers and letters (1T for top, 2T, etc. and 1B for bottom, 2B, etc.) etched in the rack on each strip of tape.

To rotate the plugs, pick up the rack and rotate it 180 so that the plug that was in the 1T position is now in the 4B or 6B position (depending on the number of cylinders). Then reinstall the plugs according to the positions marked on the tape strips. 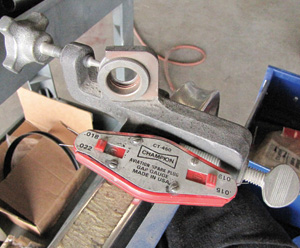 A standard 7⁄8-inch deep socket can be used to remove spark plugs, but its better to use a specialized socket such as the Champion CT 907S Plugmate 7⁄8-inch socket. This socket has a magnetic plate that prevents plugs from slipping out of the socket. Plugs undergo hundreds of hours of exposure to incredible temperatures and pressures, but they are completely defenseless against hard shocks. Therefore, whenever a plug is dropped it must be replaced because its impossible to determine if the porcelain insulator inside the plug has been cracked or damaged. Engine damage can result after a plug misfire during high-power operations.

Well-known aviation supply houses such as Aircraft Spruce, Chief Aircraft and Wicks market plug servicing tools. Aircraft Tool Supply (ATS) and U.S. Industrial Tool and Supply also sell a wide range of spark plug servicing equipment. The ATS version of the $65 Champion magnetic spark plug socket sells for $25. The company’s professional-type spark plug cleaning and testing unit costs a bit over $545 compared to the Champion cleaner-tester, which retails for just over $1800. ATS also sells what it calls a spark plug field service kit (part number SPK-001), which is sufficient for an owners needs for a little over $160. Their deluxe spark plug service kit (part number SPK-DX), which is used by many shops, costs $700.

Spark plugs can also be sent to Aircraft Plug Service in Van Nuys, California, for reconditioning. According to Jeanne, the owner, each plug gets cleaned and gapped, then tested for a hot spark at 200 psi air pressure-a much higher pressure than that used by most maintenance shops-before being painted and returned with a new gasket. You get your own spark plugs back; this is not an exchange service. The cost is $3.75 a plug. Total cost less shipping for a four-cylinder engine is $30; a reconditioned set for a six-cylinder engine costs $45.

Healthy spark plugs are critical for safe engine operation. Learning how to remove, inspect, and service plugs is a skill every homebuilder needs.

Dean Sigler - March 21, 2013
0
Diesel engines, anyone? How about biofuel? More builders are turning to such alternatives in the name of fuel economy, while the industry awaits fuel cells and better batteries. By Dean Sigler.