It has been more than two and a half years since my wife and I finished our RV-3 and flew it for the first time. Since then, we have been busy with other projects, including building an airpark home (and hangar). But with the homestead and terrestrial construction complete, it has once again become time to concentrate on finding a new airplane project. With three good, fast, aerobatic airplanes already in the hangar, it was apparent that it was time to branch out—and the need for a bush plane began to make itself known as our new home in the mountainous west beckoned. The search for the perfect bush plane continues, as there are many good options—but in the meantime something entirely different has come along.

Just over a small range of hills from our airpark is the soaring Mecca of the west: Minden, Nevada. A mere 10-minute hop by air from our own runway, the gliders sit and wait for tows to the wonderful wave of the Sierra. It is hard not to look with envy upon those who enjoy all that free flight time—free, that is, if you own the glider, and once you have cut loose from the tow plane. While we’d love to have a high-performance glider, the fact that you can’t tow with a homebuilt (a silly old leftover in the operating limitations whose origins are lost in the mists of FAA history) makes it problematic for us to fly from our own field. But it occurred to us that a motorglider might be a fun way into the basics of soaring for both of us. I have my glider rating, but sadly have had little time to use it for soaring. My wife is eager to add the rating to her Commercial ticket—and doing so with our own motorglider would be simple.

Factory motorgliders are not cheap, and they can be hard to find. Machines with superior soaring performance are, by necessity, long-spanned—creating the problem of storage for anyone without a large old surplus hangar with huge doors. Our hangar is reasonably sized, but the door opening is just inches shy of 40 feet—making a 60-foot span Grob impractical. You can fold the wings, of course, but doing so after every flight would probably soon relegate it to the back of the hangar. Tying down outside is strangely prohibited at our airpark—again due to obscure deed restrictions that seem odd for a community of aviators. So what we were looking for was a lower-performance machine whose wings can fit through our door.

A recent visit to Sonex Aircraft in Oshkosh brought forth what I like to call a “light-bulb moment”—that instant when the light bulb goes off over your head and you say “aha!” I was aware that Sonex founder John Monnett had designed both the Monerai glider and the Moni motorglider, but had not paid much attention to his latest motorglider design, the Xenos (which is, yes, “Sonex” spelled backwards). The Xenos is an all-metal aircraft, which uses the forward fuselage of the Sonex, a longer tailboom, an upsized Y-tail from the Waiex, and long metal wings equipped with spoilers. The Xenos sports a drag polar almost identical to those of the Schweitzer 1-26 and 2-33, two popular training gliders in use worldwide. While neither is competitive in the unlimited world of true competitive soaring, countless pilots have learned the basics and enjoyed untold hours thermaling away in both types.

As I strapped in for a transition training and demo flight in Xenos Serial Number 0001, it occurred to me that I wasn’t in need of the latest and greatest in glider technology—I simply wanted something to knock around in. As importantly, I needed something that would fit in our hangar and also fit in the confines of our airpark taxiways—which measure about 40 feet in width and are lined with sagebrush. Yes, our runway is 75 feet across, so it would accommodate large-span gliders—but there was no way to get to the runway first. The Xenos would fix this. Flying the long-winged craft was fun, even though the Wisconsin air was filled with nothing but sink the week before AirVenture. Taxiing the long-winged bird was a new experience for a novice motorglider pilot—you have to be acutely aware of those wingtips way out in the next zip code (especially when encountering taxiway lights). The centerline stripe is your friend. 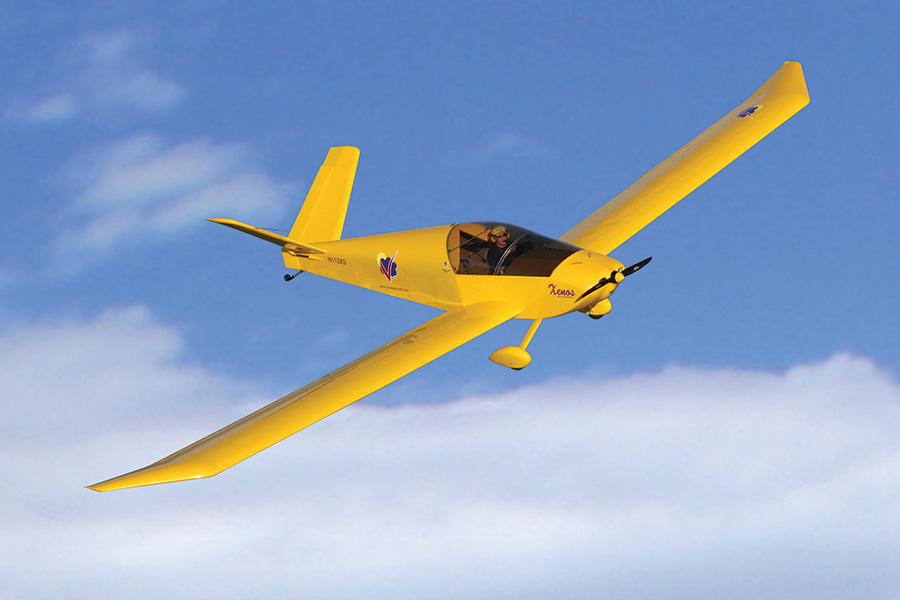 The Xenos motorglider shares the same cockpit and engine as the Sonex. The fuselage is longer and the tail is larger to accommodate the 45-foot, 8-inch wingspan.

A week later, after my wife had also sat in the aircraft and toured the factory, we had written a check. It is hard to beat the affordability of the Xenos, especially if you equip it with the AeroVee engine (another great educational project because you get to build it up). As an interim project, we expect it to be fun and give us an enjoyable aircraft that serves a unique and recreational interest when it is completed. Building the Xenos will keep us busy as we continue to shop for the bush pane—and maybe a couple of partners for whatever we choose. Maybe we’ll advertise for partners in the Xenos as well; why should we keep all the fun to ourselves? Best of all, we’re building again. The sound of metal shaping and the popping of rivets is comforting in the evening. We love to build as much as we love to fly—and with a second or third project, it is nice to be able to do both.

Rotax Training for the 9 Series

Vic Syracuse - March 28, 2020
5
Lockwood Aviation helps you get a full understanding of the four-stroke Rotax.