It was about my fourth or fifth trip to AirVenture when I had one of those “sea change” moments. I am, by nature, nurture, and schooling, an engineer. I am analytical and enjoy the company of machines. My previous trips to Oshkosh had been about shopping for airplane parts, looking at other people’s machines, and working the show—doing presentations and showing the flag for my employer. But this year was different. Not only was I a free agent for the entire week, but my schedule was extremely flexible (I was officially a media representative and only did a couple of forums and a talk at the Van’s banquet). It is rare when I don’t have a plan for a day, much less a week, and here I was, without an idea of which way to turn when I stepped through the gate each day. It was wonderful!

While it was great to be able to set whatever pace I wanted, the most incredible thing about the year was how my focus changed. While I was certainly doing some shopping for RV-3 parts and systems (our project at the time), what I found myself thinking about more than anything was the people I had met. And then it hit me—I had reached that transition point that so many EAAers have attained, but don’t explicitly mention. Oshkosh was now more about the people than the airplanes! I had turned off the left brain and switched on the right—I was now seeing the event as a social networking occasion, not as a trade show and ginormous “state fair.” It had become about the people—and wow, I met thousands! 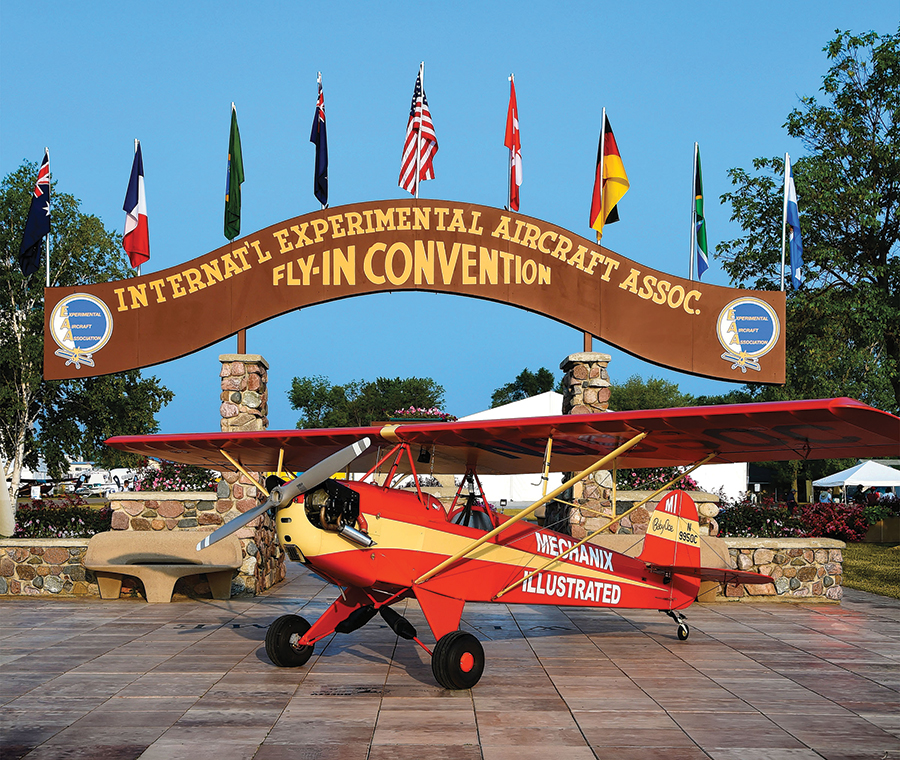 Paul Poberezny’s last project—a Baby Ace—stands in front of the arch at Oshkosh.

The first day or two, I split my time between watching out for muddy bogs (it was a wet year) and visiting booths and tents where I knew I could find familiar names—all the many vendors that we see in the Experimental world. I roamed the entire grounds to chat with friends old and new. I enjoyed meeting a lot of great people that support the various niches of our obsession—from airframes to avionics, engines, to upholstery—it was great to put faces to the names I have talked with on the phone and traded notes with on the Internet. In short order, I had brought myself up- to-date on what was going on with the industry that supports the homebuilt movement, and then I noticed something about how I was moving through the grounds: My gaze had shifted from focusing on my next “destination.” I was now looking at people—something I rarely do. I was looking for familiar faces, familiar caps, and T-shirts from fly-ins I have visited. In short, I was looking for new and old friends!

I saw a lot of new faces with old names attached as I wandered the grounds and helped out with some avionics forums. In a weird way, the soggy conditions that limited airplane arrivals made it easier to cover the tiedown areas; fewer planes meant I could more easily spend a little more time with each one when I walked “Area 51” looking for machines and their builders. Several saw me as I hunted the elusive -3’s that year. I did find two that I could look at and took a lot of pictures—very valuable information when building one of these.

After the first couple of days carrying a backpack for the few items I needed to buy, I left the bag in the car and carried nothing more than a camera and the little collapsible camp chair hung on my belt. I walked the grounds from end to end and side to side several times each day, rarely going far before starting a conversation with someone associated with Experimentals, interested in space, or standing next to their beautiful airplane (homebuilt, factory made—it made little difference).

I am not that big on watching airshows after all these years, but in the afternoons, I even unfurled the chair a few times, sat back, and enjoyed the more “unique” acts I hadn’t seen before. I let time go, and Oshkosh simply rolled over me, washing me in the currents of aviation past, present, and future. Nine days at “the show” is a long time, and at the same time, not long enough. How can you find time to visit with the thousands of people you want to see in such a short period of time? I want more than a brief hello; I want a chance to sit and chat, drink a Coke, trade stories of trips and travels. I want to both greet old friends and embrace new ones—but it is so hard to do both (or either) to true fulfillment in such a short time.

But time does roll inexorably on and family duties called. It was with considerable reluctance that I walked out to leave about noon on Sunday, turning my back on what was even then a shell of an event (Sunday afternoon at Oshkosh can be sad, as most everyone is already gone). I sort of welcomed the long cross-country home. It gave me a chance to reflect on the wonderful week of people, airplanes, and aviation, to formulate some thoughts, to write a bit in my head. Being a writer without an assignment can be a wonderful thing at Oshkosh—instead of focusing on a deadline, I could simply absorb the experience like a sponge, and then see what happened. You never know what words will eventually flow out of the experience. But I do know that Oshkosh is an event about people. People mad about airplanes, yes—but people nonetheless.