Of my few aviation campfire stories, the tale of my first biplane cross-country, typically gets the best reception. Thanks to a writer’s budget and overheated romanticism, I had recently purchased a near-derelict Starduster Too with a 540 up front. This after 20 years in rented Cessnas no bigger than a 172.

Transitioning into the open-cockpit biplane is a story for another time, but let’s note here a fixed-pitch Cessna is small training wheels for a box kite with the glide angle of a well-thrown sewer cover. It’s pretty different, sitting outside and all that, and I’m not too proud to say the Starduster, pussycat that it is, had me like the red rag at the end of a load for some time.

My interest was especially piqued for this first cross-country. It was the first time I would fly the ‘duster well over the horizon, including the nasty Angeles Crest mountain range just north of Los Angeles, and then into the far more benign, if still unfamiliar, Central Valley of California. My destination was Schellville, in the northeast quadrant of the San Francisco Bay region; my starting point Fallbrook in northern San Diego County. It was the first time I would need to manage two distinctly different fuel tanks, the first time I’d have to navigate in an open cockpit, and the first time I’d fly so high and so far in winter, albeit in mild California sunshine.

It’s worth noting that I’m 6 feet 2 and was 245 pounds at the time. That gave what politely could be called a cramped fit (still does even after losing some weight), and the cockpit offers a restrictive five-point harness, just like my racecar. It also features rather largish armrests built into the interior panels. These provide sufficient acreage to hold a rate of climb indicator (inop, ‘natch) on the left and the tachometer on the right (there’s nothing standard on this plane), along with consuming all space between the outer cockpit walls and my legs. Also important to our story, the fuel selector valve is mounted on the cockpit floor, under my left knee. All said, it was like when dad put me in earmuffs, a heavy Marine Corps shooting jacket, and tightened the sling on an ’03 Springfield, then stuffed me cross-legged on the ground and said, “Now, get comfortable.” You eventually get used to it.

Being new to the Starduster, I had yet to learn the value of leather outerwear as an antidote to wind. So I donned a letterman style jacket with vinyl sleeves and a wool torso. This was also before this late adopter could find a used GPS small and inexpensive enough to fit somewhere, anywhere, in that cockpit. So I had a WAC chart.

Recently discontinued, WAC charts’ major advantage was their large scale allowed folding them such that double the area you were lost in was visible compared to a sectional. Because the Starduster was out of rig and would roll inverted if left alone for 6 seconds, what to do with the chart became a challenge shortly after takeoff. With no pockets in the faded crushed blue velour interior and none reachable on my person, I eventually jammed the WAC under my left thigh for safe keeping. And not to overstate the obvious, but you have as much chance of opening and folding a chart in this plane as using a trampoline to launch a lunar orbital mission. What you fold to a useful size on the ground is what you’re going to see on a chart until you land, deplane, and spread the chart on the lower wing whereupon all mysteries are revealed.

An hour plus after takeoff, things were going reasonably well. The big mountains were behind us and Bakersfield in all its flatness was laid out somewhere below in that agribusiness haze. Retaining much of the altitude needed to surmount the Angeles Crest as insurance, I was slowly freezing into a cube via the porous wool jacket while the blazing sun above did little more than block my forward vision. I was also getting increasingly anxious. Home was a long way away and the path forward all new to me. My imagination ran from possibility to possibility: one moment the auxiliary fuel tank was going to run dry and what was that going to be like, another moment fixing my position in the increasing sameness of the big valley was of paramount importance. I’d pull the map from under my thigh, try to reconcile its formal representations to the hazy, grayed out reality a mile below. Finding no joy there, but reasonably sure I’d run into Interstate 5 eventually, I’d stuff the chart back under my thigh and consult the engine instruments. Those were reading okay…but where was I, exactly?

With no warning the engine gave a last, quick rise of rpm, then quit dead as Grover Cleveland. Holy $&%#! The engine just died! went through my head as my chin tried to hit my chest from the deceleration. If you ever needed a demonstration on the importance of thrust to aviation, kill a 540 Lycoming pulling a biplane through the air at 155 mph. Rudely stuffed forward, my right hand did ditto to the stick, and the nose pitched smartly toward the farmland as my shoulders strained into the harness.

I’ll admit there was a second of PIO before stabilized flight—downward—was reestablished.

“That sounded like fuel,” said the detached mechanic in the back of my brain. Boost pump on.

“Arrrrrgh!uuuuuuhhhhh,” went the 540 as it inhaled the residual fuel left in the lines.

“You idiot, you ran the tank dry!” There was an automatic rush for the fuel selector valve, a jamming of my left hand between the left armrest and my leg. My wristwatch—remember those—rolled up my forearm, further jamming my arm. Head bent down in a hopeless chance of seeing the fuel valve, I saw instead my left thigh rise off the seat to make room for my arm. Just as my hand reached the invisible valve, the WAC chart, summoned by the wind, rose magically, majestically from under my leg into the eddy in the lower cockpit. For an instant we were all transfixed, me staring at the floating chart, the chart seductively, lazily, swaying to and fro just inches from my downturned face. It was an amazing, impossible to duplicate display of physics…but, but, but if I let go of the stick we’d roll inverted, if I let go of the fuel valve we wouldn’t get the engine running, and the harness wouldn’t let me curl forward sufficiently to bite the chart…

Phft! The chart, inevitably caught by the imbalance of forces whirling in the cockpit, shot past my left cheek and to its destiny, now so separate from this cozy cockpit.

“I’ll worry about that later,” somebody inside my head said. The old, sticky, brass fuel valve begrudgingly turned from “wing” to “main,” and the engine gargled to life, a sound of inexplicable joy I might add.

Head back up, level flight resumed— 1500 feet lower than before—I tried to take stock. But the engine’s burbling kept intruding. “Lord, now what?” It was the boost pump overpowering the engine. A minute after switching it off, the engine sounded fine to my rational brain, but I’ve been mentally counting the firing order ever since.

As if this wasn’t enough, in some weird hope I turned and looked over my left shoulder. And there, strung over one of the tail group’s streamlined bracing wires was the chart. My only representation of all of California, every airport, every VOR, every radio frequency was right there, blurred in the slipstream, taunting me just feet from my reach. A few seconds later, I looked back again; only the spine of the chart remained on the wire. A third look: nothing.

Luckily Harris Ranch and its long, narrow runway is plainly adjacent to lonely Interstate 5. The self-serve fuel was great, the lack of charts a real worry until I remembered the 20-year-old San Francisco sectional I had slid into the headrest locker “just in case.”

Much was learned on that trip. I now consider my leather jacket an integral part of the Starduster and have a Garmin 196 cantilevered off the panel. Many valves and cables have been replaced, along with everything firewall forward. When my wife is aboard, the fuel tanks are switched before they run dry. As for the charts, you bet I still carry them, but now I know to slip them between my chest and shoulder harness. As friend Tom Aberle said upon hearing of the overboard chart, “Yeah. You’ll do that once.” And never, ever again. 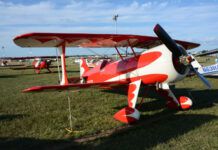 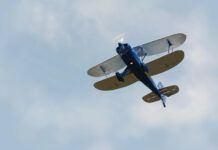 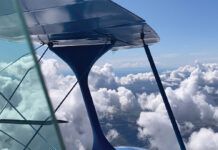 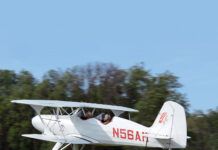 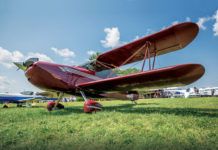 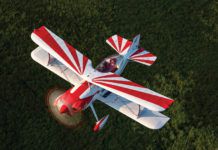