It doesn’t take long for a brand new shop to generate its own memories: holes drilled in a once-pristine worktable, aluminum shavings collecting in floor cracks, drilled-out rivet heads hiding in corners. These are the badges of merit for an airplane builder—the signs that the struggle has commenced, and the long build is underway.

Imagine then, the memories in a shop that has seen an airplane completed, or more than one machine take wing, after gestating in its welcoming embrace. I pondered this the other day while sitting in my own shop—one that has only been mine for a few years, but took in the relics of the previous shops before it. It is hard not to bring along the trophies of past battles, be they signs of victory, or reminders of defeat.

I like to keep three buckets in the workspace. One is for trash, and it gets emptied frequently. It contains old paper towels, plastic wrap pulled off of aluminum, scraps of wood too small to be reused, and the inside-out latex gloves used with composites and other messy work. Simple trash—nothing can be used again. 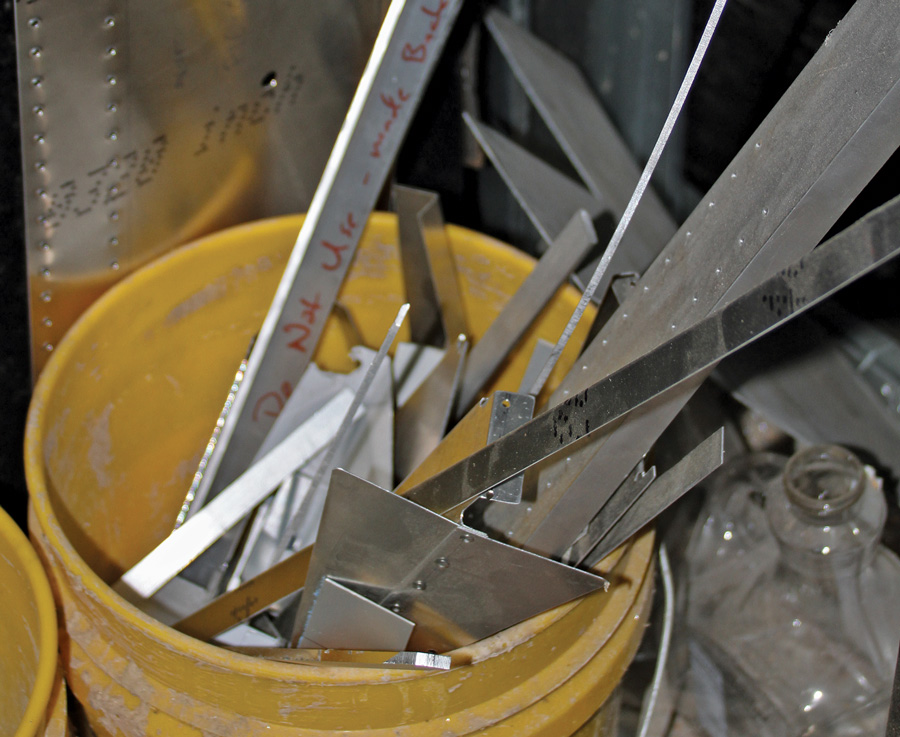 This bucket is a temporary resting place for metal scraps looking for a future home. You just know this stuff is too good to throw away and will certainly come in handy someday.

The second bucket is for metal trash, and it lives under the band saw, the tool used most often to roughly shape new parts. Into this bucket go scraps of aluminum and steel too small to ever be used again, as well as metal shavings and dust collected from the floor and bench on those rare occasions when I actually clean up. This bucket is destined for recycling, and sometimes gives refuge to the odd soda can.

The third bucket is a temporary resting place for metal scraps looking for a future home. Often riffled through for bits and pieces large enough to make other bits and pieces, the scrap bucket is analogous to every craftsperson’s woodpile. A man or woman without a woodpile in their shop is a soul cast adrift when it comes time to make a jig or to create some blocking to shim up a project. The same is true for a metal airplane builder and their scrap bucket. We often need a shim or a bracket—a clip to hold two parts rigid. The scrap bucket contains bits and pieces of precious metal looking for a final home as a component in a flying machine.

But there are memories here other than scrap! One of the drawers in our toolbox is devoted to small jigs, fixtures, and templates—items made as tools to make real airplane parts. Oftentimes, these bits and pieces take longer to make than the parts they are used to fabricate, especially when they provide critical angle measurements from which an entire set of airplane parts is to be made. For instance, in my drawer is a skewed “T” made from .090-inch aluminum. The leg of the “T” isn’t at 90 degrees to the top crossbar, but rather it leans just a little—a little less than 3 degrees. One side gives an angle a little less than 90 degrees, and the other a little more. These measurements repeat everywhere in the Xenos we are building, representing the taper of the fuselage, and giving guidance for many parts that have to be opened or closed just a little.

And how about that collection of wire harnesses now retired? If you’ve owned airplanes as long as I have, you probably have radios and minor avionics pieces that have been pulled to allow upgrading to newer gewgaws. Out comes the old, and in goes the new—and the old harness gets saved because who knows when you might need that amount of 24-gauge wire or a connector shell just like that? They hang on the wall and take up space in the wiring drawer until…well…let’s admit it: Do we ever throw any of this stuff away?

Meanwhile, stacked in the exposed stud walls of the shop are those long pieces of aluminum angle, piano hinge, and leftover hinge-pin wire. How is it that we always have more hinge pin wire than hinge material…or vice versa?

Then we come to the collection of “not ready for prime time parts”—those assemblies that were intended to be part of an airplane project, but never quite made the cut, for one reason or another. They sit around until consumed for some other project, at least in my shop. Take, for instance, a belly skin we were making as a replacement for our bush plane. We spent several months waiting on the factory to supply a replacement, pre-punched skin because of a design defect—the original was too thin. Months went by, and I finally decided that we could make it ourselves, which we did. And just as we were getting ready to make another, the pre-punched parts showed up. Because of the need to match up with other factory parts, we put our beautiful handmade skin on the wall. 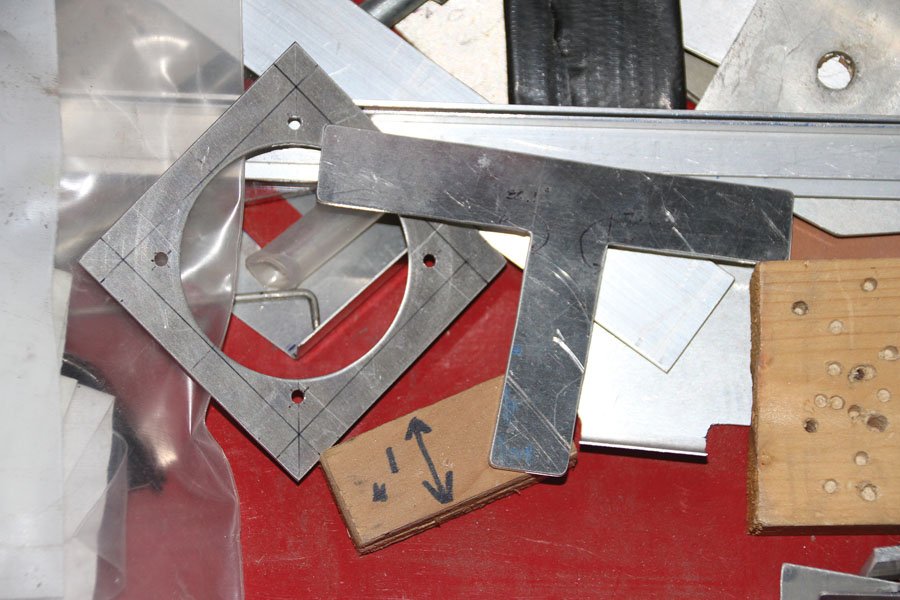 The leg of this “T” isn’t at 90 degrees to the crossbar; it leans just a little less than 3 degrees and represents the taper of a Xenos motorglider. It provides guidance for many parts that need to be opened or closed just a little.

There it hung—until I needed a bunch of narrow strips of .032-inch 6061-T6 for our motorglider project. Since the belly skin was full of holes, it wasn’t like it was going to get used for anything else but modern art. So into the shear it went, converting the previously extra part into useful strips of shim material.

Such is life in a builder’s shop. Items come…and items tend to stay! The shop’s patina reflects changing interests in aircraft types and construction, avionics, and maintenance tools and gadgets. When the shop moves, we might throw out (uh…I mean donate to a fellow aviation enthusiast) a few token things here and there, but we carry the memories with us from place to place, our personal history, as it were, in aviation and airplane construction. Let’s face it—every dedicated builder I know is part pack rat, for you just never know when you’re going to need that set of wheels you got from a fly-market for your next project.

Barnaby Wainfan - June 13, 2008
0
Pitch is not the only axis involved in making an airplane fly well. Yaw and roll are also important, and this month Barnaby Wainfan turns his attention to lateral/directional stability and its effect on flying qualities.