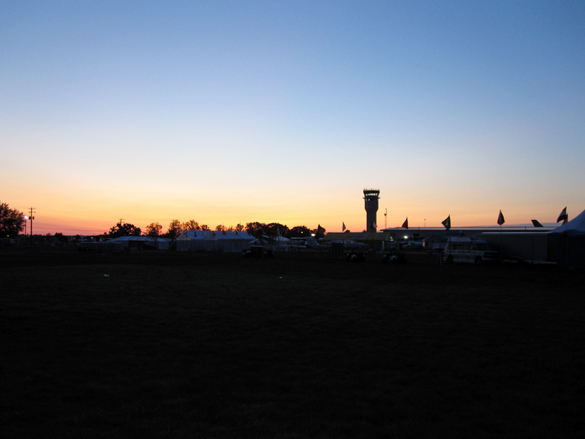 Oshkosh AirVenture is an eerily different place without the crowds. 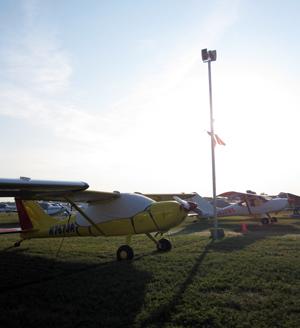 Prowling around the grounds as the sun comes up.

My cell phone buzzed at 4 a.m., and I cursed Paul Bertorelli. Paul is the mainspring of video technology in our group that includes AvWeb, and he had the idea of shooting some early morning air-to-ground video using my Glastar Sportsman. He’d come up with a rugged strut mount for the camera, and was eager to try it in ideal conditions. We met Wednesday morning, at the airplane by 5:30, and were flying shortly after 6.

In the video, you get a sense of scope and an appreciation of just how many Winnebagos and Airstreams are in the world. Watch near the end of the video to see where the Airbus A380 left about $500 worth of rubber on Runway 36L; you can’t miss the four-maingear skids. I think the video gives a fair sense of gliding over the massive grounds at 60 knots, air smooth as glass.

Flying for the video was a pleasure, of course, but there was just something about getting to the field ahead of the crowds, parking in the first slot and being among the very few engines running at the opening of the airport at 6. (Because the field isn’t open to arrivals until 7, we had to have special permission for the shoot. Not to take off and circle, but to be allowed to land.) Half an hour after we landed, Oshkosh began to look like Oshkosh: filled with people, slightly hectic, promise of a steamy, sweaty day of walking displays and indoor booths. But for that hour before the swarm, AirVenture is almost eerily attractive.

Everything changes at night.

I attended the annual Glastar Association brat-roast held in the camping area, and after some great eats (thanks to Glastar builder and test pilot Dan Dudley of Madison), I was joined by a handful of hardy revelers to the heart of the campground, Reverend Chuck’s Church of Beer, where a bewildering collection of icy cold foreign and microbrew (no domestics, please) is maintained in a casket. Celebrations were going strong at 10 p.m., and no one camped around seemed to care. The long day had begun to catch up with me, else I might still be there.

Talk about your full aviation spectrum… 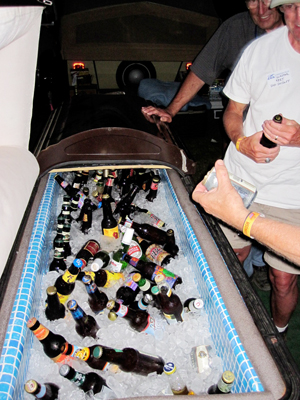 A converted casket made an excellent cooler.