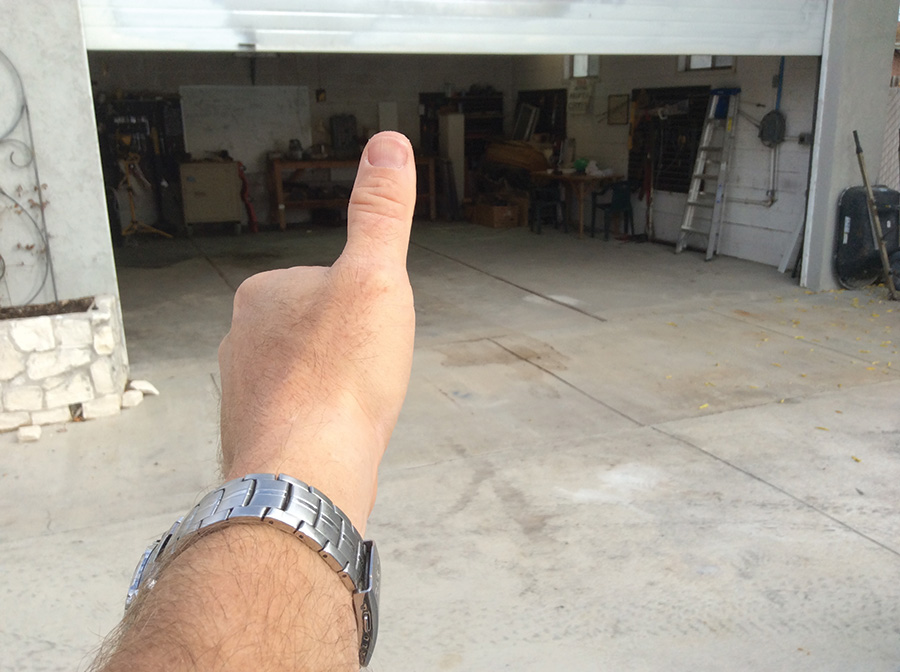 The reasons for starting another airplane project might come from anywhere—the mind or the gut, the heart, or that sweet dream of yourself flying over the backyard in your underwear. Almost none of them make perfect sense, despite the many advantages and benefits of engaging in ambitious projects. Education, adventure, and a sense of accomplishment come with building any successful project, whether a canoe, coffee table or go-kart. So, why build an airplane? Most people are intrigued, but walk away scratching their heads. Halfway through most of my airplane projects, I go straight to banging my head against the wall…but we’re getting ahead in the story.

It’s an empty shop that motivates me. Like an empty box to an imaginative six year old, an empty shop is already full of possibilities. When the shop is empty and the imagination full, it seems as though the bare minimum of sweat could produce the next wonder of the world. An active imagination is more convincing than the best snake oil or financial planning salesman, easily drawing conclusions before any work actually happens. Seems the imagination turns to dreams, which turns to large financial commitments, before the work and sweat actually dial in the focus on reality.

You’d think a seven-time airplane builder would have better sense. Instead, I had an empty shop, and an idea to build a cheap, but practical airplane. Like I said, imagination almost got the best of me. Again. The last effort spared no expense, and sure enough, produced a wonderful, very expensive airplane. The Pitts Model 12 burns a lot of expensive fuel, lives in an expensive hangar, and needs very expensive insurance. I feel grumpy when adding it all up, however, a single flight resets all the dials and I remain convinced it’s the best of all airplanes. This is a never-ending cycle—gripe, fly, rejoice, repeat. Somewhere in the midst of the madness drift the whisperings of an empty shop, and I wonder if the cost could be brought down with a different approach.

Sure, the afford-a-plane plans are cheap, describing a plane that indeed flies, albeit very slowly. In my mind, slow does not equal practical. Neither does anything with only one seat. As the past owner of two Cri-Cri’s, I will avoid single place airplanes. The “practicality” counts double if it can be shared. So, two seats, not slow—say 200 mph, and cheap. So cheap that replacement costs compete favorably with insurance premiums, and hangar storage becomes an extravagant luxury due to the plane being stored at home. Trailerability alone would cut the Pitts expenses in half. With no insurance and no hangar costs, the fixed costs drop to comparatively nothing. Operating expenses could be reduced as well. I wished for electric power, burning no fuel at all, but the practicality is simply not there. I hoped for diesel power, burning jet fuel, but the engines are expensive, bringing insurance back into the picture. Auto fuel is a must to keep costs down, but the popular Rotax 912/914 engine series are expensive, too.

So, with a cheap practical airplane coming slowly into focus, I scoured the industry for an airplane to fit the following parameters:

Most European homebuilt designs aim for similar design goals. My favorite, the MCR 01, can make wonderful speed with a Rotax 912, but costs four times my budget. The Europa is nearly as capable at a little over twice the budget. The BX2 Cherry looks attractive, but seems underpowered and a little slow.

Rutan-designed homebuilts caught my fancy early on. I’ve flown the VariEze and Long-EZ, and have great appreciation for the designs, but both involve a major undertaking to fit on a trailer. Admittedly, they can live well tied down on a ramp with a canopy cover, but even that small parking fee goes against the design goals of my imaginary airplane, and both push the cost envelope a bit. 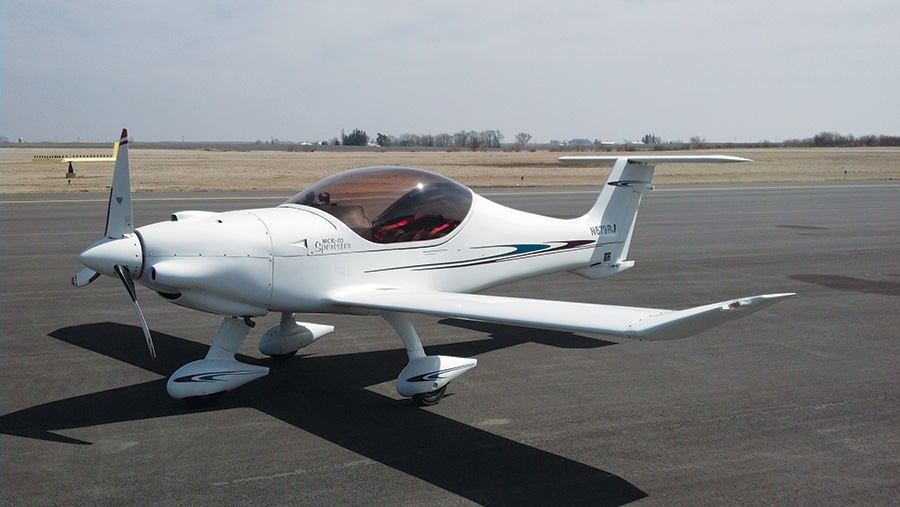 The MCR 01 can make wonderful speed with a Rotax 912, but it costs four times the author’s budget.

The Quickie Q2 and Dragonfly looked like they could fit, but the Dragonfly is not designed to trailer without major disassembly. The Q2, on the other hand, might just fit the bill. Fit the butt is the better word, here. I’m 6 feet 2 inches tall and weigh over 210 pounds. I taught a student to fly his Dragonfly several years ago and barely fit in the cockpit—had to wear my headset upside down, running under my chin. I remain impressed with the efficiency of the airplane, but consider it underpowered for the Utah mountain area, too slow in roll, and difficult to slow down. A minimally practical airplane should be able to climb consistently, I think, at 1000 fpm or more.

You can’t just shoot everything down, you say, demanding pie-in-the-sky performance for pennies on the dollar—but you must understand, with nothing in the shop and no money spent, my imagination can run wild. So we’ll add to the list:

I found a local builder who kept his Q2—in a hangar—at KSLC (Salt Lake City International Airport). He kindly let me squeeze my XL frame into the cockpit. Surprisingly, I fit well enough if the seat cushions were left behind. He explained that the tail cone removes with ten screws, and the whole shebang fits on a trailer sideways, if tipped nearly on its nose. I imagined a simplified mechanism to hold the tail cone in place and a really clever trailer that jigged everything together for quick reassembly. I’m not flying in my underwear yet, but getting close. His plane looked perfect, with superb glasswork, but had not flown in ten years. During the test flights, he thought the CHT gauge was broken, as it always pegged the needle off the scale to the right. Only after a rather fast descent at a low power setting did he notice the indication come alive, moving down through 465 degrees! Having thoroughly toasted the engine, he parked the plane, awaiting conversion to O-200 power when time allowed. Mental note, VW-powered Q2s might be prone to overheating. 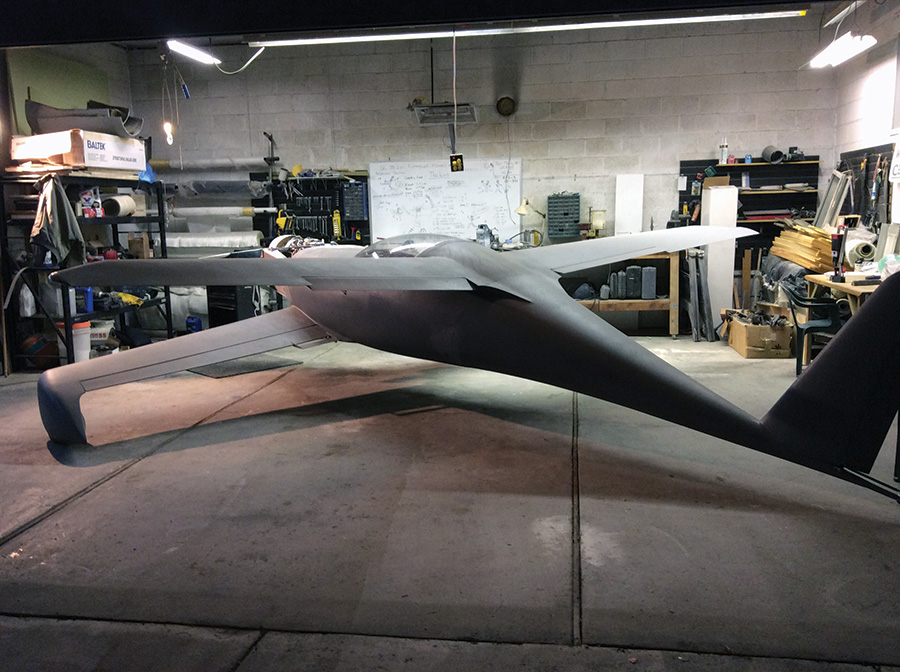 Of all the aircraft he considered, the Quickie Q2 came closest to meeting the author’s main criteria for the project: two seats, not slow, and cheap.

After much study in the details of the Q2/Q200 design, I felt that it could be made to best fit the above criteria with the addition of a few modifications. A great web site exists which details most of the needed adjustments: www.quickheads.com.

My imagination now pictured a Q200 in the shop, and I went looking for a suitable project to make it a reality.

Reality is like waking up from a dream, and it’s where the adventure begins…

Paul Dye - April 17, 2012
0
Countless modifications for homebuilts are available, but does that mean they're right for our projects? Paul Dye discusses the value of keeping things simple.