Many of you call and write asking for a simple overview of basic “wiremanship,” so I thought I’d start out with a beginner’s guide to wire stripping and crimping. Perhaps later we will have an opportunity to review other topics, but for this exercise I wanted to focus particularly on stripping a wire and crimping a terminal on the end of a wire.

So, yes, this process may not be as exciting as looking at fancy EFISes and GPSes, but being able to properly crimp wires is vital to your finished airplane. Even the most basic homebuilt aircraft will likely have a few wires that have been done improperly, resulting in bad repercussions. Indeed, there are a number of cases of airplanes—from large jetliners to small sport aircraft—that have crashed as a result of a simple wire terminal failure. For the purpose of this article I’ll presuppose that you are using aircraft quality wire and aircraft quality terminals—no automotive or hardware store brand components!

Most of your tools should be in the mid-level price range. Some import quality tools are acceptable as is, others must be modified to be acceptable. If you purchase your tools from a company that focuses on high quality tools or electrical components, you should be safe. Some of the tools from “big box stores” will be of good quality, but others not so much. 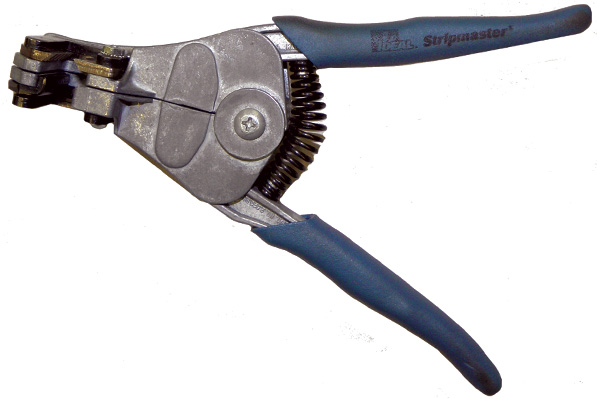 For stripping wire the best tool is a high quality stripper as shown in Figure 1. Most good strippers are made by Ideal, but other high end manufacturers make them as well. A good stripper will have a range of capability in its dies as shown in Figure 2. To strip the wire, simply insert the wire into the correctly sized cavity. In Figure 3 we see that when you first squeeze, the rear part of the stripper will grab the wire while simultaneously closing the stripping dies around it. To strip a wire, simply squeeze more, and the stripper will remove the outer length of insulation, leaving the conductor exposed as depicted in Figures 4 and 5. To fully cycle the stripper, you should squeeze it until the handles almost touch. If you have squeezed them far enough, the mechanism in the tool will release the wire first, then close the head of the stripper without damaging the exposed conductor. 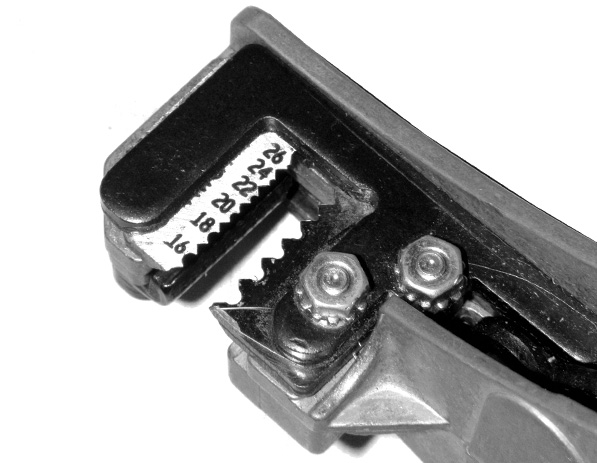 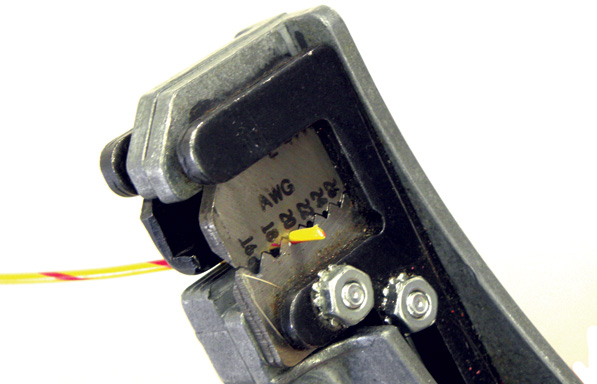 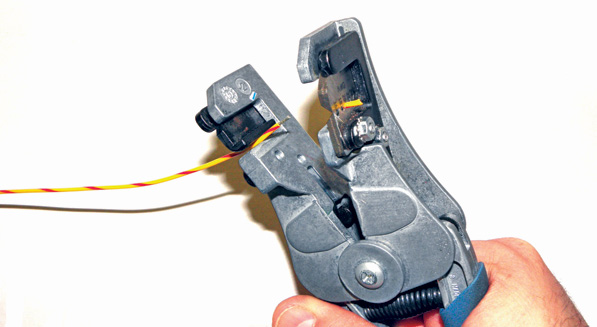 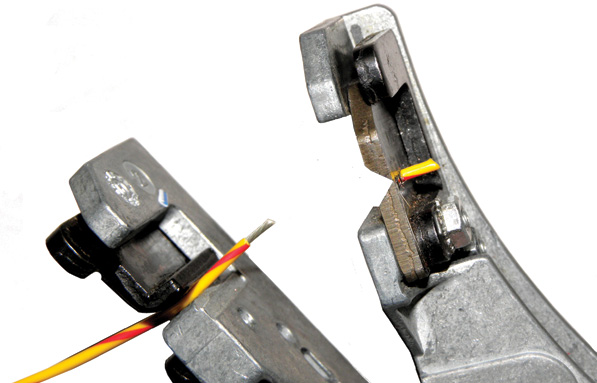 Once the wire is stripped, you can crimp on whichever type of pin or terminal you need. The first device we’ll crimp here is a simple D-Sub machined pin, which is used throughout an airplane, from avionics to trim, wire, sensors and more. For crimping on these pins, most avionics shops will use a Mil-Spec certified crimper, but most homebuilders will be using a lower cost version as shown in Figure 6. (As far as I know, only B&C and SteinAir make the necessary modifications to imported tools for proper crimping.) To use this tool first place a pin onto the wire you just stripped. You’ll notice on the small D-Sub pins that there is a little window (sometimes called a “witness hole”) that allows you to see when the conductor is inserted the correct distance into the pin as in Figure 7. With the pin placed on the wire, you then insert it into the open cavity in the crimper face (see Figure 8). You may also place the pin into the crimper and then insert the wire if you are sure the length of the stripped conductor is correct. If you are using a properly configured tool, the crimper will ensure proper depth placement of the pin as depicted in Figure 9. The indent crimper is easy to use: You simply squeeze it together until it releases. This is true for both certified and imported tools. A properly crimped pin will have four or eight indentations around the circumference of the pin as seen in Figure 10. Note that these pins may be soldered in place rather than crimped, and if done properly will be just as acceptable.

Another type of crimper is the standard ratcheting terminal crimper shown in Figure 11. There are many variations of this crimper. Most will suffice if they have been reviewed or are being offered by a reputable company. These types of crimpers are somewhat adjustable and often will have interchangeable dies that allow you to crimp different styles of terminals and coax connectors. In this case we are specifically looking at the standard “red, blue, yellow” terminal crimper used for crimping ring terminals, spade terminals, butt splices and other similar components. The colored dots represent the color of the terminal to be crimped, and are sized properly for the wires you will be crimping.

You’ll notice there are basically two rows of teeth to the crimper. If you look at Figure 12, you see that this is the front of the die with the colored dots and the cavity is shaped somewhat like a bowtie. This is the side of the crimper that will be used to crimp the insulation. The other side of the die as shown in Figure 13 has half-moon-shaped cavities and is used to crimp the conductor. Again, you may insert the wire onto the terminal and then place it into the crimper, or you may position the terminal into the crimper first as shown in Figure 14. As with the other crimper, you simply squeeze these crimpers until they release. After you complete the crimp you can see that the rear of the terminal has a nice bowtie shape around the insulation (Figure 15). Helpful hint on these crimpers: Most of them have a “release trigger” in between the two handles. By moving this trigger you can release the crimper before its cycle is completed (useful if you have positioned the terminal improperly).

A common crimp used in homebuilts is the Molex type, which is used to crimp open barrel type pins for devices such as strobe lights, Mate-n-Lock connectors, strobe connectors and some avionics. A certified tool will cost hundreds of dollars but you can use a lower cost tool as shown in Figure 16. This crimper has multiple-size cavities in two different shapes. If you notice in Figure 17, the A/B cavities are circular in shape, while the C/D/E cavities are heart shaped. There’s a reason for this. When placing the wire into this type of pin, there will be two sets of tabs on the pin (Figure 18). One set is for the conductor, and the other for the insulator. To crimp these pins, the insulation gets crimped with the heart shaped cavities (C/D/E) first as shown in Figure 19. Next you move the pin and crimp the insulation in circular cavities (A/B) as depicted in Figure 20. The completed crimp that we show in Figure 21 highlights the circular bear-hug-type crimp and the heart-shaped crimp on the insulation. Note that these types of pins may also be soldered in addition to crimping. 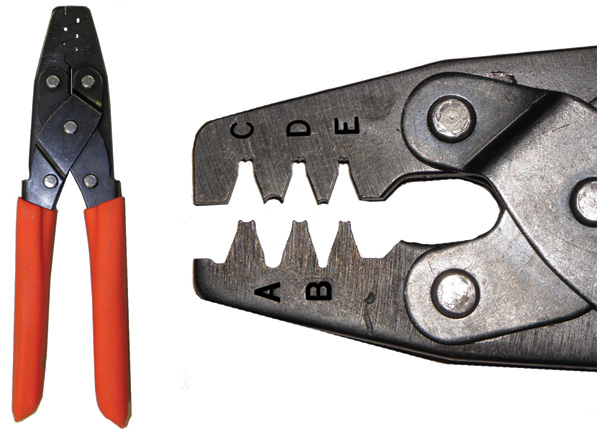 Last but not least we’ll look at the ubiquitous coax connector, specifically a BNC. While you will not use as many of these in your plane as most other types of crimped connectors, they are every bit as important, if not more so. Most audio, transponder and navigation problems on a newly built airplane can be traced to poor coaxial connections. For most BNC and TNC connectors we’ll often use the same ratcheting type crimper as noted before, except with a new set of dies in it made expressly for coax crimps as seen in Figure 22. Figure 23 shows a piece of RG-400 coaxial cable as well as the typical components for a crimped-on connector. They consist of a center pin, a compression sleeve (ferrule) and the body of the BNC itself. 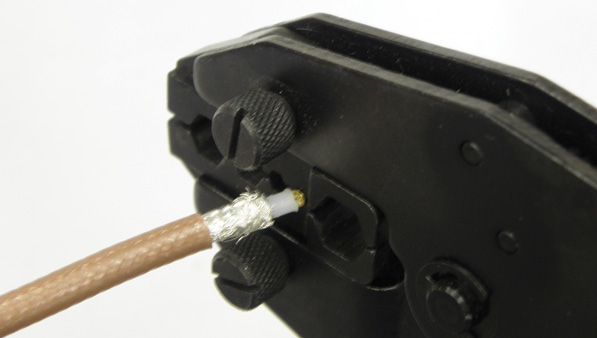 After the center pin is crimped, place the sleeve/ferrule onto the coax cable (Note: If you don’t do it now, you likely won’t be able to put it on later). In Figure 26, we see how the body of the BNC relates to the outer shield. When inserting the pin, you’ll feel a distinctive “click” when it is correctly seated. Then slide the compression sleeve that you previously placed on the cable up and over the shielding as shown in Figure 27.

Next, place the entire assembly into the appropriate crimper cavity and cycle the crimper as illustrated in Figure 28. Figure 29 shows the completed crimped BNC connector. We typically place a piece of heat shrink over the ferrule that both protects the connection and allows the connector to be labeled. Here’s a helpful hint on BNCs and other coaxial cable connectors: They are gendered by the center pin, not by the body, so the connector pictured in these examples is a male, even though it appears to go over the outside of the mating connector as typical for a female connector.

The above noted examples certainly do not cover each and every type of possible crimp connector in the aircraft, but most are included. If you take your time and use proper tooling along with good quality components, your airplane will be quiet, safe and reliable.