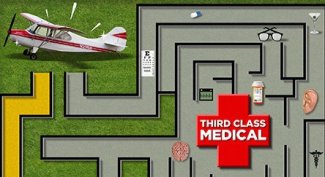 The FAA said on Wednesday it is starting a rulemaking project that will explore whether to allow private pilots, in certain instances, to use a driver’s license instead of an FAA medical certificate. The FAA added that it is “still considering” a petition from AOPA and EAA that was submitted in March 2012, asking the FAA to allow recreational pilots to skip the FAA medical. “The FAA is considering whether it can provide any relief to the medical requirement, while maintaining safety, prior to completion of the rule,” according to Wednesday’s announcement. EAA and AOPA were quick to welcome the news on Wednesday afternoon.

“The FAA’s announcement that it will begin the rulemaking process is the next important step along a path that we sincerely hope will allow more pilots to fly without the expense and frustration of the medical certification process,” said AOPA President Mark Baker. “For a decade, sport pilots have flown safely without third-class medical certificates, and we’re confident private pilots can do the same. This issue is extremely important for our members and we appreciate the FAA’s decision to move forward with rulemaking. We will continue to work with FAA, Congress, and our members to complete this process as quickly as possible.”

The FAA’s announcement is “a good initial step,” EAA said. “We are eager to see the details of what they are proposing and evaluate their significance,” said EAA chairman Jack Pelton. “EAA will support this rulemaking initiative as well as legislative solutions to expand the freedom of flight for our members and all aviators…. Aeromedical reform has long been a top priority for EAA and the member participation in this campaign reinforces how important it is to pilots everywhere. EAA is working hard to effect meaningful change and will not stop until we do.”

Details about the rulemaking project, which the FAA is labeling “Private Pilot Privileges without a Medical Certificate,” will be posted soon at the Transportation Department’s rulemaking website, the FAA said.