Flying to the Texas Hill Country in February is always a challenge. Folks who haven’t lived in Texas probably think of it as a giant John Wayne movie set—dusty, dry, cactus and sagebrush dominating the scene. In fact, that part of the West doesn’t start until you get out beyond the plains—east Texas is a land of flat farms, forests and salt prairie melting eventually into the Gulf of Mexico. The climate is dominated by moisture much of the time, and the winters, though not particularly cold, are wet and prone to low clouds and fog. This moisture blows inland from the Gulf a couple of hundred miles until it bumps in to the central Texas hills near Austin and San Antonio. The typical weather forecast for the region that time of year is for low clouds and visibility until 10:00 a.m., progressing to overcast, MVFR conditions between then and noon, with some breaks in the overcast by mid-afternoon, before settling back into IFR after dark. 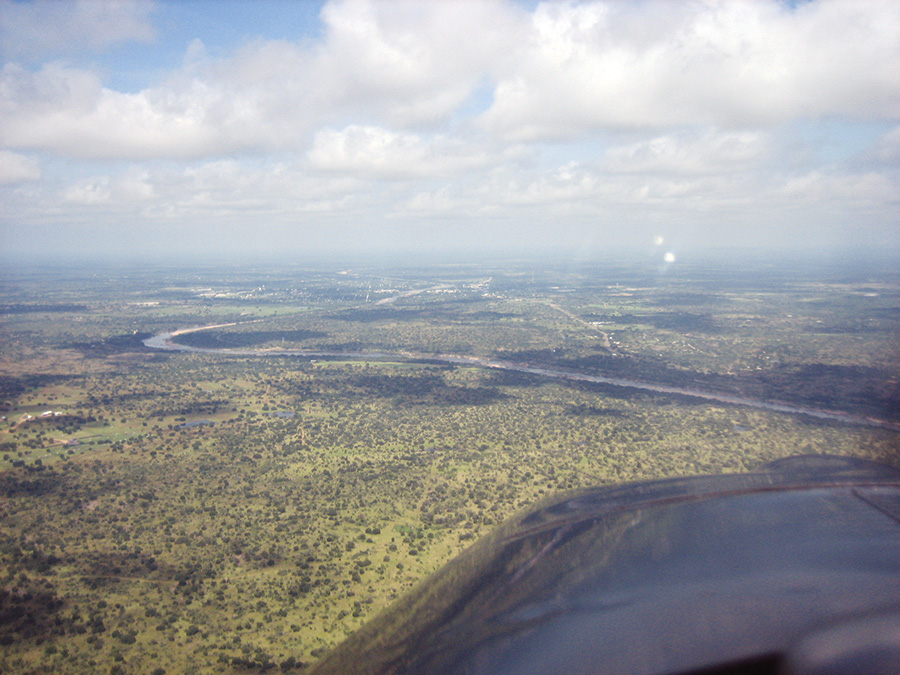 The Texas Hill Country, while arid, has a lot of days with low clouds that can stay from morning through the afternoon.

Launching a flight to one of the towns on the east edge of the hills, like New Braunfels or San Marcos, is always a bit problematic, because you leave MVFR conditions along the coast, hoping for the moisture to let up, per the forecast. But a funny thing happens to terminal forecasts as you watch them. They seem to erase their own “mistakes.” At sunrise, the forecast is for MVFR by 0900, but it is still low IFR at 0630. At 0800, still IFR, the TAF now says MVFR by 1000 hours. “Hmm, I was sure you told me it would be better by 0900,” you say.

“Oh no, we never promised anything by 1000,” says the TAF. And so it goes; the clearing time changes hourly until the entire day has passed, and all the time, the little German town has been blanketed under low clouds and enveloped in mist, its residents unaware of the broken promises of sunshine that could bring your tourist dollars to buy a nice dinner of schnitzel and sauerkraut. Day after day this little charade goes on. Predictions of better weather give way to disappointing results, and the pilot begins to lose faith in the science of meteorology.

When we are new pilots, we generally fly light, slow airplanes with limited range, and the weather at our destination when we plan to arrive is generally about what it was when we departed. We look at the forecasts but wait for good weather before we launch, because we want to know that we have safe landing conditions when we get there. Way too many accident reports conclude with “continued VFR into IFR conditions.” We don’t want to become one of those statistics.

But as we grow in our aviation pursuits, we stretch our legs, flying to distant places and spending more hours aloft getting there. Current conditions at the end of our journey are not as important as what it is expected to be like upon our arrival, so those terminal forecasts take on a greater importance in our life. We are, in essence, launching “on faith” that the conditions when we get there will be acceptable for whatever type of airplane we are flying and equipment (and skills) we have. Transoceanic flights that are going to be airborne for half a day between their departure and destination have to rely on the long-range forecasts—and be prepared for just about anything when they reach the other end of their journey. Going that kind of distance and not landing isn’t an option, which is why Cat III approaches and automatic landing systems were developed. 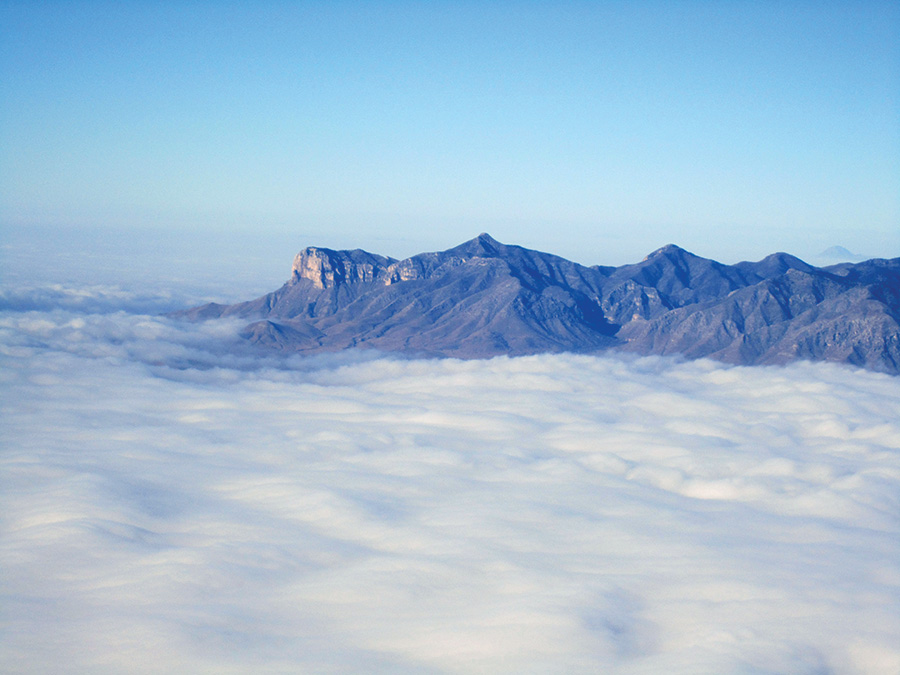 Local knowledge will tell you that the Guadalupe Mountains in west Texas often stick out of a low cloud layer that makes one airport show as VFR while another nearby is low IFR. There are also steep and rocky hills hidden underneath those clouds!

When flying a modern, well-equipped homebuilt (or other GA aircraft with exceptional range), we have to carefully evaluate the current weather as well as the weather trends. Taking a look the day (or several days) before is a good way to get a sense for how good the meteorological community is at calling the weather for that location. There are places where you can count on the weather being acceptable if they say it is going to be good. The high desert, for instance, is generally a desert because, well, it doesn’t get much moisture. And that often means the weather is good enough to fly most of the time. The Pacific Northwest, however, well, we all know about the rainy days in Seattle. Spring and fall bring unsettled weather with lots of temperature variations across the mid-section of the country, and it is not uncommon for the dreaded “IFR creep” to appear in the TAFs, predicted improvement giving way to extended gloom. In the absence of a major weather-making system, knowing what it did yesterday is a good first step in predicting what it will do today. 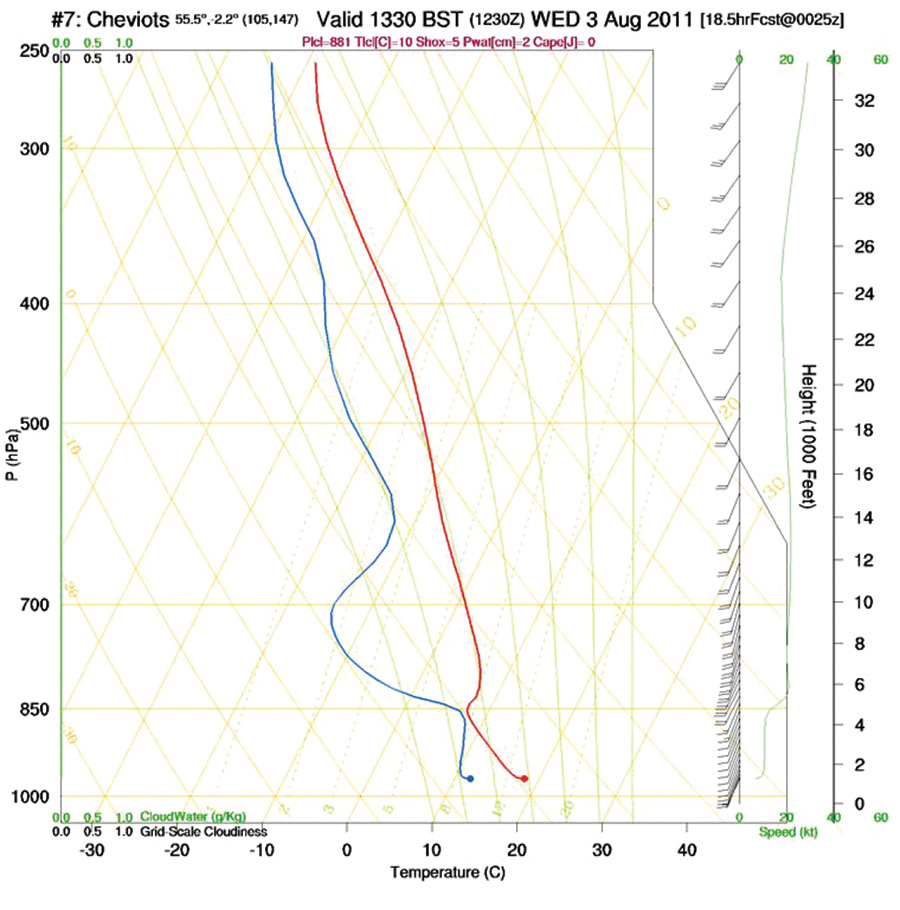 Understanding weather charts and what they have to tell you can help you pick the days when things can be expected to clear—or not.

Even with the best understanding of what the TAFs say, and what experience shows us that they mean, we are still left with depending on a little bit of faith that the atmosphere will do what we (and the weather-guessers) believe it will do. And it is not uncommon for us all to be wrong. So what are we to do? Depend on divine providence to see us through? Never leave the confines of our local flying area for fear of running into weather that we can’t handle? I would propose a third alternative: Have an ironclad backup plan.

Let’s take, for example, that flight from Houston to New Braunfels. I used to make that flight many times each winter to visit my snowbird parents who abandoned the cold winters of Minnesota for the frost-free conditions (and reasonable greens fees) in central Texas. I would fly out on weekends when I had the time, usually in my old big-engine Grumman Yankee with extended-range fuel tanks. With the extended tankage, I had enough gas to fly out there, make an approach or two, and fly all the way back to Houston with good IFR reserves, and, in fact, I did that several times over the years. Launching for a destination where I suspected the TAFs were lying meant having complete confidence in the weather at my alternate, something that was often not realistic on the moist Gulf Coast, in which case I would call Mom and Dad and tell them I’d see them another time. But with modern kit aircraft, whose range clocks near 700-800 miles, ironclad alternatives are much easier to achieve.

Flying to the LA basin, where smog and the marine layer can combine to ruin your day? Hey, the desert is only 100 miles to the east or northeast, and it’s pretty easy to count on an airport there staying open. You might not like missing out on your coastal plans, or sitting and watching tumbleweeds cross the desiccated airport, but it is a lot better than being stuck in the air with fuel and options running low. 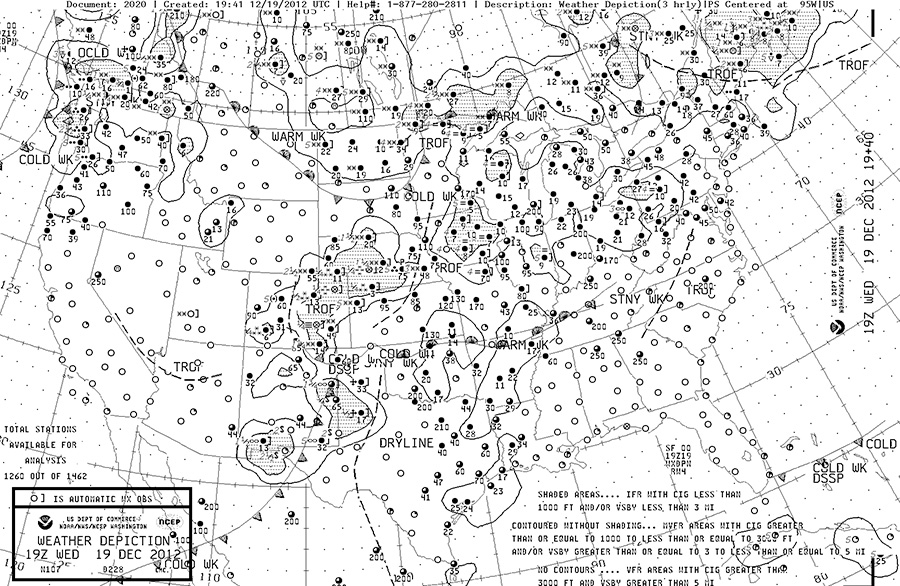 When weather is varied across a long-distance flight, you have to understand the patterns to know if you can expect it to clear at your destination, or if you might actually need to use your alternate.

In-cockpit weather has revolutionized our ability to launch “on faith” because it lets us easily keep up on how the predictions are doing.

Not one to enjoy the hot and bumpy air of the afternoon, I frequently launch on a long cross-country before the sun comes up. More often than not, the tight temperature/dew point spreads of the morning hours lead to fog or misty conditions until the sun gets an hour into the sky to warm things up and allow the atmosphere to reabsorb the moisture it has let escape overnight. The explosion in automated weather observation stations in the past decade gives us a front-row seat as we watch the day begin on the METAR page of our airborne weather device. Pre-sunrise cloud reports are always a bit suspect in my mind. Most fields report clear (or at least VFR) right up until the break of dawn, with green and blue dots welcoming the unsuspecting to try their wings. Then…bang! All the dots turn red, signifying IFR conditions over a broad area all at once. But cruise along for an hour and the dots begin to turn back to more welcoming shades, the air clearing to nice flying by our mid-morning fuel stop. Our faith in the forecast is justified on these days, the atmosphere giving us a little break from the unknown.

Be a Weather Watcher

But on those days when the red remains? It is good to have an IFR clearance and an ironclad backup plan. Especially in the spring and fall, when the weather is changing as great storm systems move across the continent, we need to know where we are going to go when the forecasts let us down. Eventually, the forecasts will let you down, shaking your faith and belief that meteorology is actually a science. It is truly an amazing thing, when you think about it: launching from our safe terrestrial ball into gloomy skies that are predicted to be nice by the time we arrive. It pays to be a student of the weather, even on days when you are not planning to fly, so that you have a foundation on which to base your belief (or disbelief). Years of watching the weather will give you an idea when you can expect actual conditions to match the forecasts, and when to wonder just what those computer models were thinking when they called for “clearing by 0900.” Flying is not supposed to be a “faith-based initiative,” but when it comes right down to it, we do have to have a certain belief (along with a healthy skepticism) to fully utilize our machines for reliable transportation.