Although a large part of what I do in the Flight Test world revolves around reducing and evaluating risk in order to achieve mission success, I have never really enjoyed studying the topic in an academic sense. Mention “Risk Management” in a meeting and dozens of experts with advanced degrees will magically appear. They will begin piling mountains of books about risk on the table. They will start talking about statistics, Probabilistic Risk Assessment, and Design for Minimal Risk. Yet very few of them have, in actual practice, taken personal risks in various types of flying machines. Not to insult anyone (because risk management is a primary job for test pilots), but I feel that to be a true risk expert, you need to have a little skin in the game in order to speak from a position of experience—to know that feeling in the pit of your stomach that comes when the outcome of an event is less than certain. 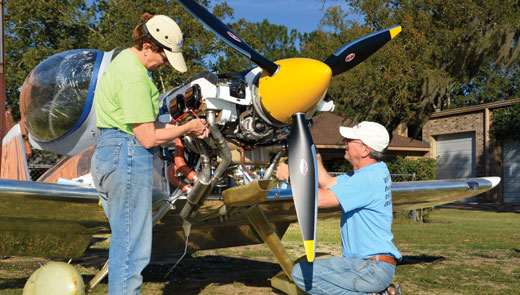 Meticulous inspection and maintenance can make it easier to accept that single engine up front.

Rather than using academic definitions, I like to look at risk in simple terms—those that the average pilot, builder, designer or decision maker can understand without taking a course in the subject. I always look for new ways to do this, and I found one while having a discussion with my pilot/builder wife. We were driving to Oshkosh (after making a weather-related, risk management decision to leave the airplane at home), and the discussion turned to the risks of flying. “You know,” she said, “what bothers me more than anything is when a pilot rationalizes risk, rather than accepting it!”

I was a bit stunned when I heard this, because it explained, in very simple terms, a concept I have struggled to put into words for quite some time. And here it was, as plain as day. Someone who rationalizes risk will say something like, “Oh, there really isn’t any risk to flying, as long as you….” On the other hand, someone who accepts the risk of flying will say, “I know that flying can be risky, but I accept that, and work to make it safer by….” Some may see this as a subtle difference, but the truth is, there is a very fundamental gap between the two ways of looking at it. Those who rationalize the risk stop thinking of it as a risk that needs to be mitigated. Those who accept that the risk is real are more likely to keep working to prevent undesired events because of it.

I know many experienced pilots for whom I have a great deal of respect, but who occasionally state that flying really isn’t all that risky. They don’t like the emphasis that is placed on safety and risk mitigation. Most of these pilots are making, or have made, a career out of flying and I understand where they are coming from. I live at an airpark with easy access to my planes and fly almost every day. Airpark living can make you start treating your plane like an automobile, or even like a bicycle—something you can hop in (or on) and go somewhere without a lot of planning or particular care. Flying often is a great way to build both skill and judgment, two prerequisites that mark a good pilot, but it can also lead to complacency if you let it. 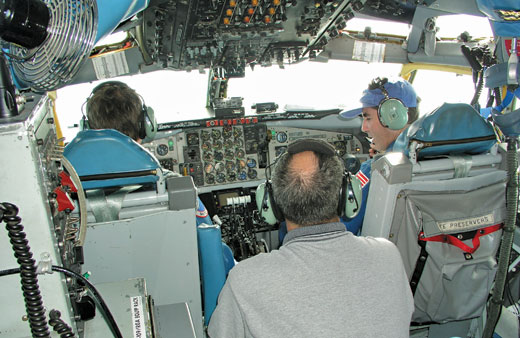 Having a crew allows the pilot to bounce ideas off of other folks in the cockpit, and it keeps him from making unilateral decisions without laying out the rationale.

Some of my good flying buddies are either current or former airline pilots who frequently quote the old saw that the most dangerous thing about flying is the trip to the airport. Well, that may be true, though I haven’t actually looked at the statistical basis of the statement. Airline flying, with its rigorous training, adherence to procedures, and meticulous maintenance has lead to an almost unbelievably low accident rate. But general aviation is another matter; the numbers are nowhere near as good for those flying for recreation, or under less-stringent Part 91 rules for commercial operation. Flying with many pilots in light aircraft can make that drive to the airport much more attractive from a risk perspective. It is easy to see why folks who have lived their lives in an airline cockpit might not understand the increased risk that comes from less-codified flight operations, and hence, not understand, or acknowledge, the actual risks involved. But understanding and accepting those risks are the very first steps to mitigating them, and a lack of acknowledgment is, in essence, the same as ignoring them or rationalizing them away.

What does this mean to us in our daily flying? We can start by listening how we talk about the risks of general aviation or Experimental aviation. If we find ourselves trying to explain why it is not all that risky, alarm bells should start sounding in our heads. Frankly, I fail to understand how anyone can explain away the risk of moving at speeds far faster than a human can run, and falls from heights much more than a few feet. Those factors are the essence of aviation dangers: Hitting solid objects at great speed, or from a significant height, are rarely conducive to a long life and good health. It takes good pilot skills, sound judgment, and reliable equipment to mitigate the risks involved in such activities, and no good can come of denying the dangers. Watch out for statements such as: “Well, it’s just a low, slow Cub,” or “I fly all the time. How dangerous can it be?”

Accepting risk, on the other hand, is actually quite liberating. Gone are the fears brought about from knowing that we have blind spots in our perception of risk, gone are the roadblocks to finding ways of improving our odds. By acknowledging the risks of flying a single-engine aircraft at night, or under IFR conditions, we can begin to look for ways of reducing the risks that we can control. Acknowledging and accepting risk is not an admission of fear or weakness, it is the first step to enhanced safety. Once we identify the risks, we can start to think and talk about ways of mitigating them. 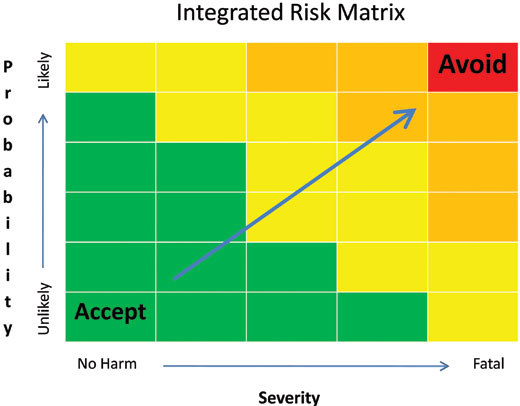 Good risk acceptance depends on good analysis. Understanding the relationship between the probability and severity of a risk will help you make rational decisions.

The obvious risk in single-engine flying is the possible loss of the engine. Trying to convince ourselves that the engine won’t or can’t fail is rationalizing, or denying the risk. If we instead identify the potential of an engine loss as a risk, we can then start analyzing why it is OK to trust it. For instance, we can look at the reliability question: If we are flying a stock aircraft power system, from the fuel filler caps to the propeller, we can look at the history of the entire system and develop a reliability number. This is not rationalization, this is data analysis. If we are flying instead with an experimental power system, we might have a lot less confidence in the overall capability of the system to provide power when we want it. This is not due to any inherent weakness, but rather due to a lack of proven system time on which to base our faith in the overall reliability.

Let’s say that after looking at the overall reliability of our single engine, we are still nervous about its ability to provide power when we need it. We can then mitigate our risk by making sure that we always have an “out”—a safe place to land should the big fan out front quit going ’round and ’round. Keeping emergency landing sites in reach at all times might limit our ability to use the airplane in certain instances, but it will keep us safer. We might decide that the risk of night or IFR operations is too great, because we have no out if the engine stops. This type of risk analysis is possible because we have admitted that there is a potential for danger. We can choose to accept the risks after an objective review, and that’s OK; it is far better to knowingly accept the risk than to ignore it.

Further discussion in this vein takes us perilously close to one of those academic discussions of risk that I mentioned at the start—I can already see some eyelids beginning to close. So let’s wrap it up before you incur an injury by falling asleep and hitting your head. The next time you find yourself thinking, “Hey, flying isn’t all that dangerous,” think again about the two methods of dealing with risk: rationalization versus acceptance. Rationalization blinds us to the potential risk to ourselves and our passengers. Acceptance is the first step to opening our eyes and coming up with useful plans and tools for making our flying safer. Don’t take to the sky blindly, bringing passengers along without a safety margin. Think about how you personally approach the idea of risks in aviation, and ask yourself: “Am I rationally accepting the risks or rationalizing them away?”