Rotax has added a new engine to its line of popular four-cylinder, four-stroke aircraft engines: the 912iS. The new e 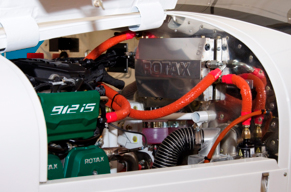 ngine represents somewhat of a technological leap for aircraft powerplants in that it features port fuel injection and an electronic engine management unit. Company officials rolled out the new engine at BRP/Rotax’s company headquarters in Gunskirchen, Austria, on March 8. The launch customer, among several, for the new engine will be Pipistrel Aircraft, of Slovenia, an LSA and soon-to-be manufacturer of certified aircraft. Rotax clearly intends the 912iS to be a “green” engine with improved fuel economy and lower emissions as some of its design goals.

Horsepower of the new engine will remain at 100, as with previous models of the 912, but in place of the Bing carburetors, which some owners have complained about having to adjust from time to time, the 912iS will have automotive-type fuel injection with an ECU (engine control unit) capable of timing and shaping each fuel charge. Each cylinder will have dual injectors for redundancy. The company claims up to 30% lower consumption than like-power aircraft engines.

The overall physical size will remain essentially the same as previous models of the 912, though the weight will be about 6 kilograms more for a total weight of about 63 kilograms or 140 pounds dry, installed weight. The engine will also have an external alternator to power both the ECU and ship’s systems. According to Rotax, the engine will be available in two versions, the 912iS non-certified and the 912iSc for certified aircraft. Production is scheduled for March 2012, and the engine will come out of the box with a 2000-hour TBO.

Rotec Research, which distributes Rotax products in North American, said it expects to have a kit version of the airplane available for homebuilders sometime in 2012, as soon as it can develop training and support materials.