Beginning with the September 2008 issue and ending June 2010, KITPLANES published a succession of articles chronicling the late Bob Fritz’s experience constructing a Jabiru J250-SP. Although it opened like the typical builder’s journal—how and why I picked this kit, etc.—it soon became apparent that “To Launch a Light Sport” would be anything but. Bob took a warts-and-all approach. Among other things, he was highly critical of the documentation, which was outdated, and took frequent swipes at the haphazard manner in which the hardware was (dis)organized.

In addition to his regular Home Shop Machinist column, between September of 2008 and June of 2010, KITPLANES published more than a dozen articles by Bob Fritz about his Jabiru project.

Nonetheless, Bob pushed on and with the help of several friends, including Rob and Mark Kirkpatrick, the Jabiru folks in Australia (who supplied a stream of updates), and Jabiru’s west-coast dealer at the time, Jim McCormick, he got it all sorted. By the time the story culminated with the recounting of its first flight, Jabiru two-six-niner-niner-tango had become one of the most, if not the most, thoroughly documented projects in the history of KITPLANES.

I never met Bob Fritz. I did exchange a few e-mails with him about CNC machines in the spring of 2009. He mentioned he had been recovering from what, at the time, appeared to be successful surgery for brain cancer. Alas, by 2010 the cancer had returned, and he passed away in early 2011. It was very, very sad.

The series touched on virtually every aspect of the design and construction of the Jabiru J250SP.

In the ensuing years, I often wondered what ever happened to Bob Fritz’s Jabiru.

That question was answered late one evening in January 2014. I was curiously browsing Light Sport aircraft for sale on Barnstormers (www.barnstormers.com) and there it was: “Jabiru for sale, built by Bob Fritz. Make offer.” I immediately thought how cool would it be to do a “What Ever Happened To” article on Bob’s plane.

The next day I called Li Vellinga (Bob’s widow) and explained how I now write the “Home Shop Machinist” column (that her Bob had started) and what I wanted to do. We talked for some time about the history of the plane and why she was selling it. She said when Bob died, she considered flying it instead of her Cessna, but it was just too much to deal with emotionally. She agreed that a follow-up article would be a nice tribute to Bob, and she’d keep me posted on the sale.

Bob Fritz occasionally mentioned his health situation in the final installments of “To Launch a Lightsport.” The articles were published two years removed from the actual construction.

The Jab had only been flown occasionally since Bob died, so it was basically like new. At the time of the listing, the engine and airframe had just over 60 hours total time. But, as any builder knows, “finished” for the purpose of the airworthiness inspection and “finished” to take to Oshkosh are two different things. The outside was plain white, the wheelpants had never been installed, and the interior was bare. Even the seat cushions needed upholstering. It’s impossible to fault Bob for neglecting those details. I am sure that getting it in the air was the priority. It’s understandable that to him, these were non-essential details that could wait.

A few weeks went by and there was no word from Li, so I called to see what was up. She mentioned getting one offer, but they retracted it after finding out it was built from a kit and not factory-built. Maybe they just didn’t know the plane’s history. It’s wrong to assume factory-built is outright better than amateur-built. For the most part, so-called amateur-built airplanes are anything but. Building your own airplane comes with the understanding that your life and the lives of your passengers depend on doing things right.

Over the next few days and weeks, it became more and more urgent that Li sell the Jabiru. She had hoped that it would sell quickly because she had made plans for the space in her hangar (she lives west of Sacramento, California, on an airpark property). With no sale pending, she was forced to temporarily move the Jabiru to her neighbor’s hangar to make room. 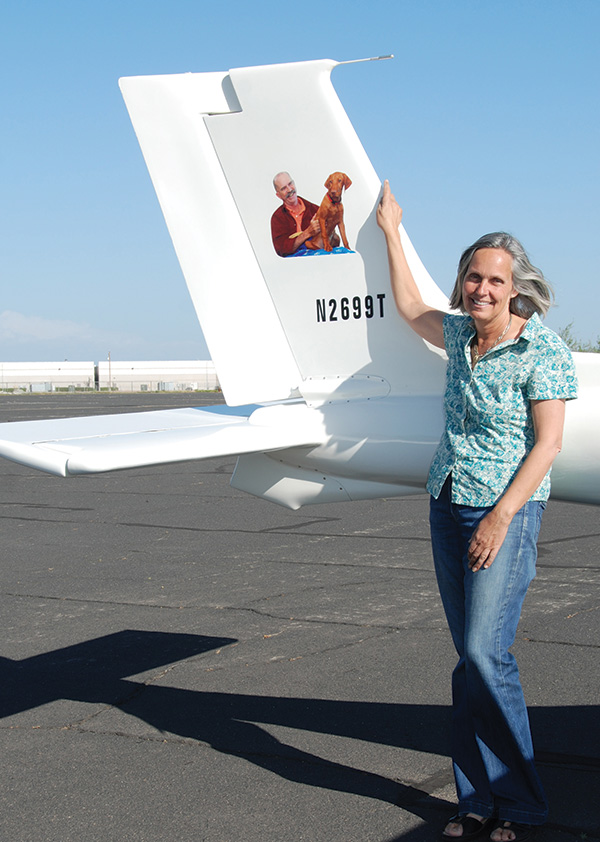 On the day of the sale, Li Vellinga with Bob Fritz and his puppy Ready-Redi.

Just in time, a buyer stepped forward with an offer to purchase the Jabiru. Even better, it was someone familiar with the plane from the articles and was, you could say, a fan of Bob Fritz! The deal required a condition inspection by an A&P, as well as a review and sign-off on all the factory service bulletins. The buyer also needed, as a condition of insurance, four hours of dual instruction and six landings with a certified flight instructor.

Li pulled it all together in one swoop! She and the buyer mutually agreed that A&P mechanic, CFI, and Jabiru builder Milt Cialariello would be perfect for the job. Milt would spend the week going over the plane. The buyer would arrive Friday evening to be briefed on the airplane and its systems. On Saturday the dual instruction would consist of hopscotching local airports more or less en route to the buyer’s home field in Southern California. Li would follow in her Cessna and pick up Milt somewhere around Madera or Bakersfield and take him back to her place. 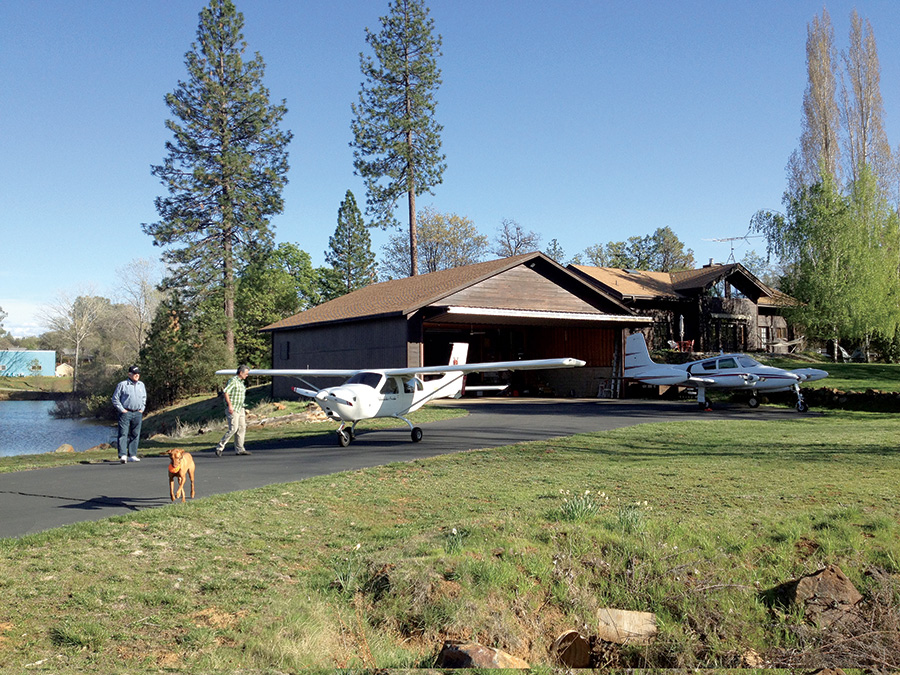 Three Bobs: Bob Davidson (owner of the house and hangar in the picture), Bob Hadley, and Bob Fritz (in spirit) living on in Ready-Redi, the Vizsla puppy. (Photo Li Vellinga)

As of this writing, Bob Fritz’s Jabiru has been in the hands of its new owner for 10 months. In that time the seats were upholstered, the interior finished, and the wheelpants installed. The exterior was spruced up with some wacky zebra stripes (in keeping with a theme). The plane is flown regularly, usually local, but it has been over the San Gabriel Mountains a couple of times—once to Kernville for a mountain-biking trip and to Bakersfield to attend a Jabiru engine class. 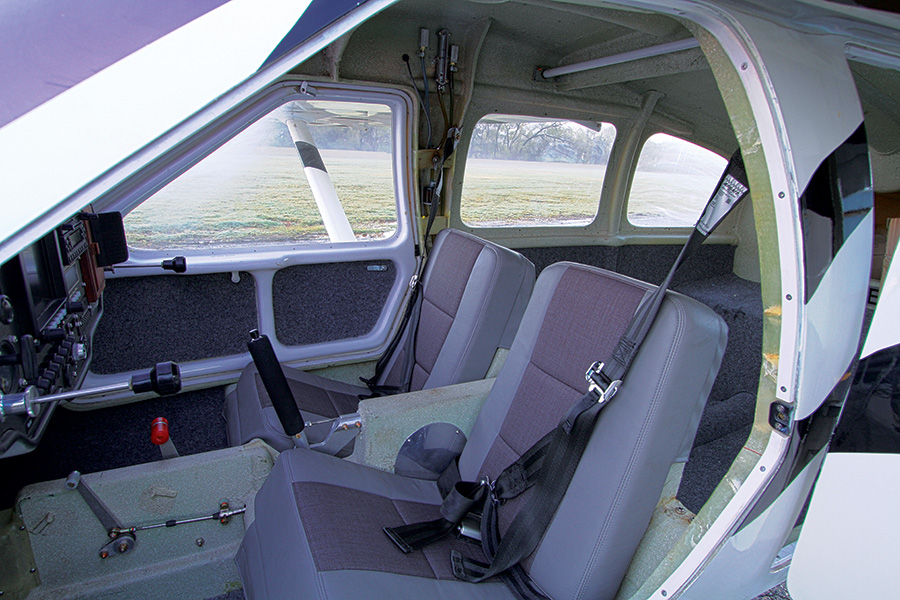 Upholstery and carpet helped put the finishing touches to the interior. The unusually large cargo area (for a Light Sport) can fit a bike or a gaggle of gear for cross-country trips.

In case you haven’t guessed it already, the buyer is me! No, I was not in the market for an airplane when I first contacted Li about this story. I guess I became interested when she suggested—not so subtly, but still very sweetly—that I should make her an offer. She kept insisting that I would be the perfect person to buy Bob’s Jabiru. And I kept agreeing—sort of passing the Home Shop Machinist torch, if you will. 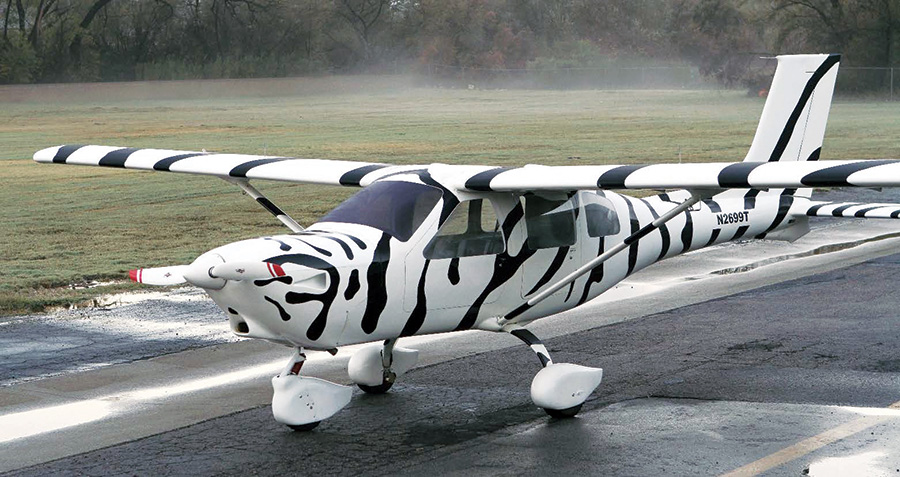 Bob Fritz’s Jabiru as it looks today with the final paint scheme and the wheelpants installed.

So there you have it. Now you know what happened to Bob Fritz’s Jabiru!

Find out more online! Bob Fritz’s HSM columns and his series “To Launch a Light Sport” are available to subscribers on the KITPLANES web site. Click on the E-library and you can browse back issues or search for all of Bob Fritz’s writings.

Dave Prizio - November 16, 2012
0
Besides venting engine exhaust, an exhaust system must heat the cabin and warm the carb. Some crucial rules must be heeded, no matter what kind of system you choose.