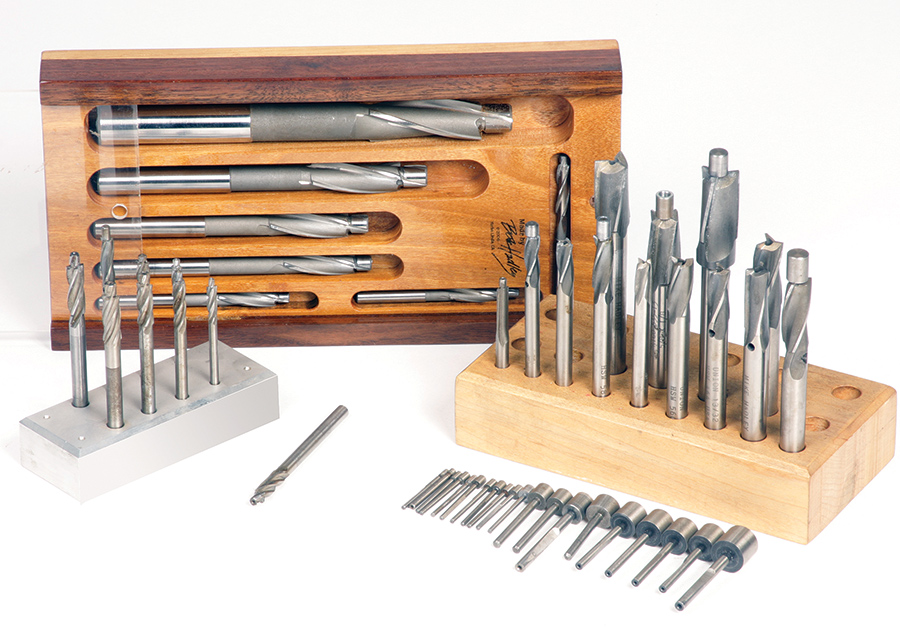 Counterbore sets (front left, and back) typically cover a basic range of sizes for standard socket head screws and bolts. Counterbores with interchangeable pilots (front, right) offer the flexibility to create “custom” counterbores or to use the bits as guided reamers.

Counterbores are used to recess screws or bolts below the surface of a workpiece. Counterbores might be considered a relative to countersinks [“Home Shop Machinist,” March 2015], but practically speaking, they are entirely different. Unlike countersink cutters, counterboring requires a dedicated tool for each size and screw head style. Why counterbore? Two reasons come to mind: First, to eliminate protuberances that might present a chafe risk (such as against hoses or wire bundles). And second, to save weight through the use of shorter bolts and screws. (Every little bit adds up, right?) 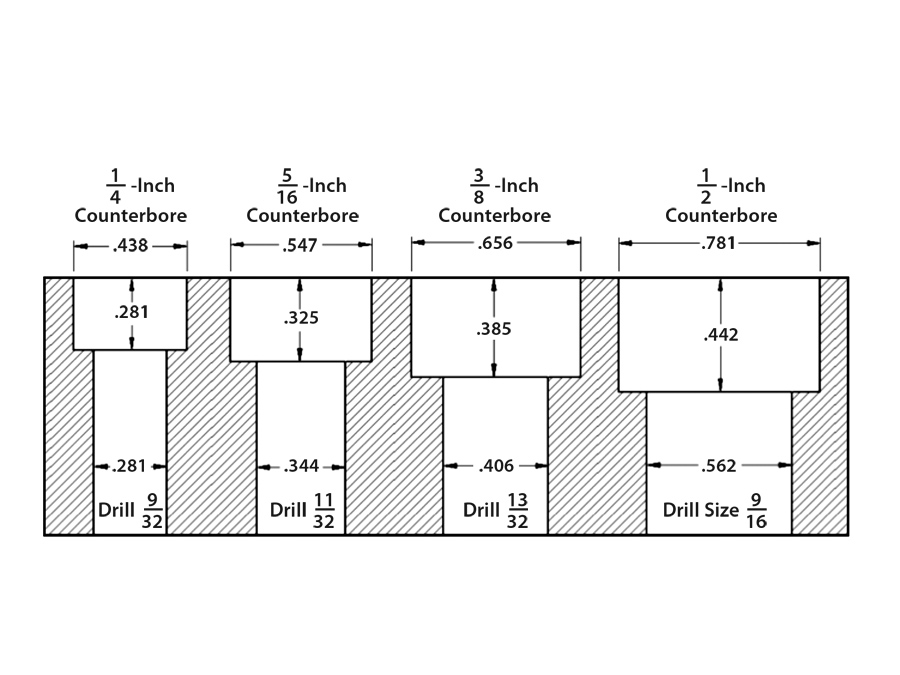 A typical “standard” counterbore set for English thread hardware consists of seven cutters for screw thread sizes 6, 8, 10, inch, 5/16 inch, 3/8 inch and inch. One critical distinction with this set is the cutters are marked to the corresponding screw size. In other words, select the -inch counterbore for use with a -inch socket head cap screw. Important note: The clearance drill for the counterbore pilot is 9/32, not inch. Refer to the accompanying chart for examples of the clearance drill requirements, bore depths, and diameters for common English thread socket head cap screws. The depths indicated provide a flush-to-surface installation, which is purely optional or dependent on the application. Sometimes the base material may not be thick enough for full flush, or there may be aesthetic reasons to have the screw head protrude above the surface or go deeper. 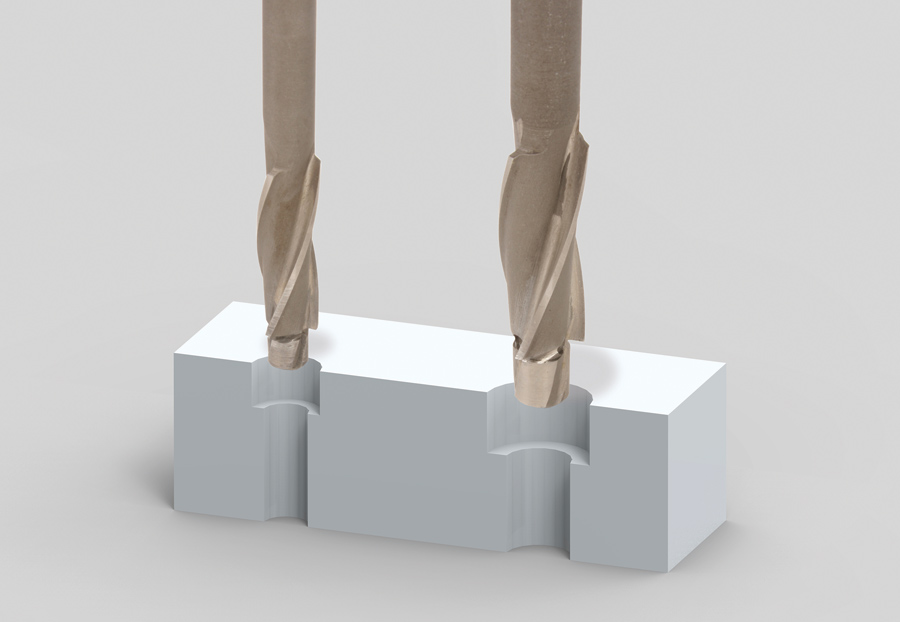 Every home shop should have a basic set of counterbores. The set of seven shown in the opening photo sells for around $50. Bits with interchangeable pilots cost more, but are not a necessity for day-to-day work, and can be purchased as needed when you need to make a “special” counterbore. A good example would be for counterboring a hex head bolt. The counterbore needs to be relatively large to allow space for a socket wrench (see photos). Another special application would be when you need a closer fit than the typical generous clearance hole provided by standard counterbores. An example would be to tap threads in a counterbored hole. 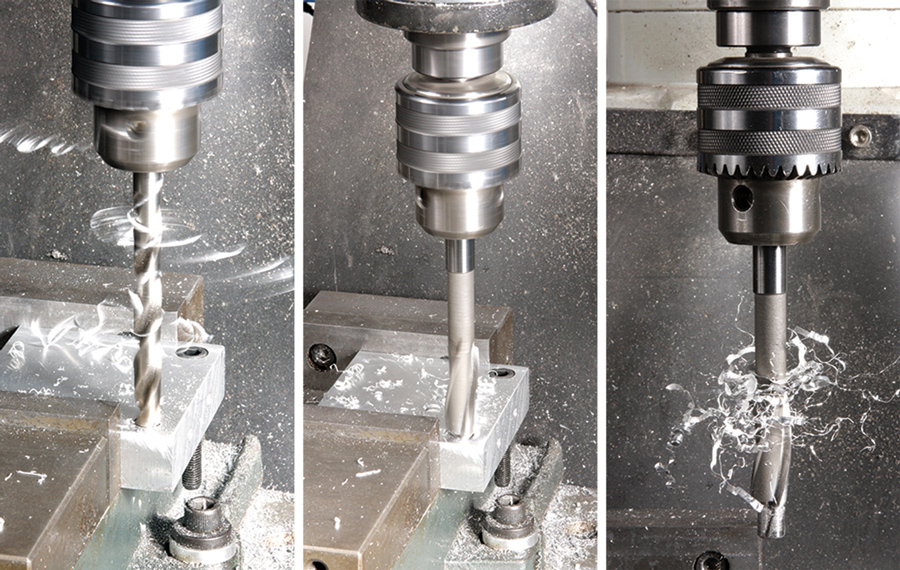 Yet another application is to use a counterbore bit as a piloted reamer; it’s a quick and easy way to enlarge an existing hole. I recently had to change six -inch holes to 3/8-inch holes on a propeller crush plate for my Jabiru. I could have used a twist drill, but a piloted counterbore is much easier. Using a -inch pilot in a 3/8-inch counterbore, I was able to enlarge the holes to 3/8 inch with spot-on accuracy and in less time than it took to type this paragraph. To do the same job with the same accuracy with a twist drill would have required that I first line up each hole using a -inch dowel or drill bit, clamp it to the drill press table, change the bit to a 3/8-inch drill, and repeat the process for the other holes.

A final note: Freshly machined counterbores have knife edges that must be deburred. Deburring the clearance hole might take some effort or a special tool to get at, but it should be deburred as well. For deburring tips see “Home Shop Machinist,” June 2015.

Making a counterbore with clearance for a socket requires an interchangeable pilot.

Reworking these -inch holes to 3/8 inch on this Jabiru crush plate “freehand” using a counterbore with an interchangeable pilot.

Dave Prizio - May 17, 2013
0
How to sort through the maze of instrumentation choices.