Kitplanes has learned of the recent passing of one of the legends in homebuilding, Ray Stits. He was 93 years old. Ray’s many contributions to homebuilding began in 1948, five years before EAA was founded, when he designed and built the world’s smallest monoplane. “Junior” had an 8’10” wingspan. In May, 1952, he introduced the world’s smallest biplane. The Skybaby had a 7’2″ span and became a tremendous hit on the airshow and newsreel circuit. Today, it’s still one of the most popular attractions in the EAA Museum. Later in 1952, he designed the Playboy, a low wing, single seat taildragger that became the most popular homebuilt design of the 50’s and 60’s. Interestingly, it was a highly modified Playboy that became identified as the RV-1, the first in a series of modern designs by Dick Van Grunsven.

When Ray learned about the Experimental Aircraft Association, he joined and talked Paul Poberezny into letting him found the first EAA Chapter. With the creation of EAA Chapter One at FlaBob Airport in Riverside, California, Ray established one of the most active centers for homebuilding in the world, eventually attracting other designers like Lou Stolp, of Starduster fame; Ed Marquart, who designed the Marquart Charger; and Bill Turner of Repeat Aircraft. Today, as a result of Ray’s effort with Chapter One, EAA has over 700 Chapters worldwide.

Ray started out selling plans for homebuilts in the 50’s but soon learned that there wasn’t much money in that line of work. He went to work on a flame-retardant fabric and paint that became famous as the “Stits process”. Today, Ray’s company is simply called Polyfiber and it’s owned by Jon Goldenbaum.

In total, Ray designed 15 airplanes. He test flew all but the first two and sold plans up until 1969.  Recently, he was recognized as a Master Mechanic and a Master Pilot. As the primary focus at all of the EAA conventions held in Rockford, Ray probably did more to inspire designers and builders in the first two decades of the homebuilt movement than anyone else outside of the Poberezny family. He remained active at Flabob Airport right up to the end. 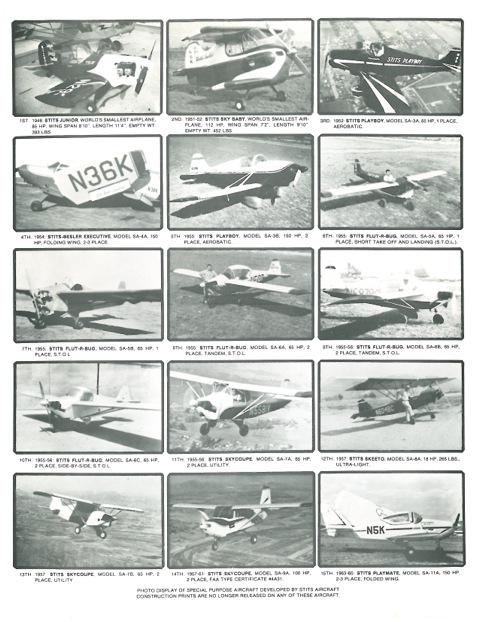