Home Magazine Builder Spotlight How to Use Your Oxygen System 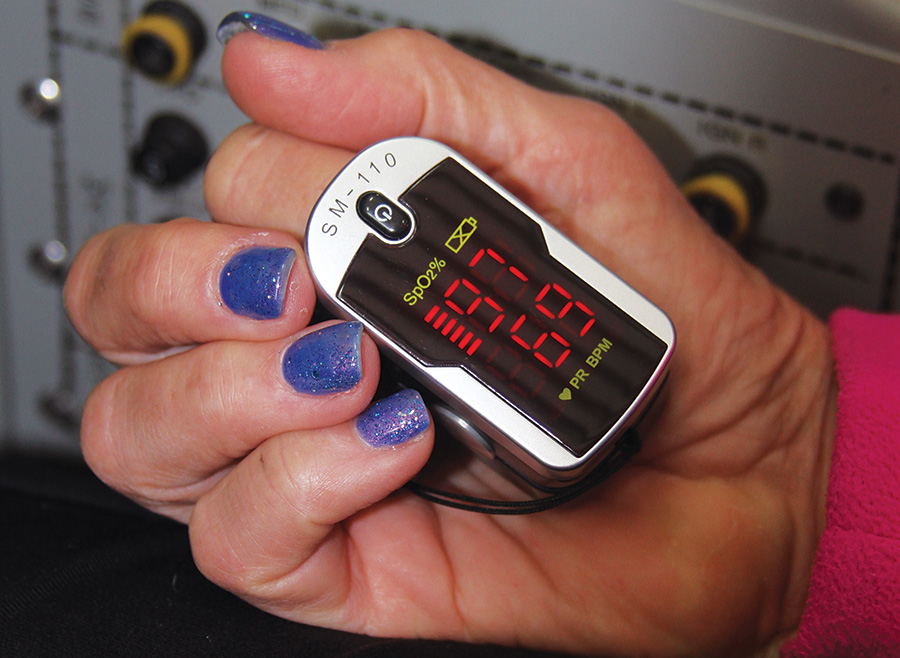 The kit aircraft industry has come a long way since I first became involved in the early ’80s. Today there are a number of high-performance kit aircraft that will take you into the flight levels. A few are pressurized, but most aren’t. No question about it, being on top of nasty weather, enjoying a smooth and ice-free ride, gives one a “warm and fuzzy” feeling.

I have spent the bulk of my 23,000 hours in the flight levels in both pressurized and non-pressurized aircraft. In my late teens, I took advantage of a Civil Air Patrol program where one could go through a pressure chamber. This experience left me with an acute respect for having full knowledge of oxygen breathing equipment and noticing early signs of hypoxia. Though I am comfortable operating in this arena, one can be in big trouble if you don’t pay attention or play by the rules.

There are many reasons to use oxygen besides flying over bad weather. For one, using oxygen greatly reduces fatigue. For years I would deliver airplanes all over the U.S. and Canada. Eight-hour fly days were not uncommon. By using oxygen, even if I never got above 9,500 feet, I was alert at the end of the day, not to mention my night vision was excellent. Even if you have never been a smoker, the results of using oxygen are very noticeable. If you have a long distance to cover, going higher reduces fuel burn. On one flight I was delivering a plane back to the Cessna factory in Independence, Kansas, from Salt Lake City. At 15,500 feet I picked up a 30-knot push, dropped the fuel burn down by 3 gph, and was able to do the flight non-stop. All in all, I saved time, fuel, and was refreshed because I was using oxygen.

When I left the airline cockpit, I worked for a large Cessna affiliate. When the single-engine, high-performance Cessna Corvalis (unpressurized) came out, I was sent to Bend, Oregon, for a three-day training course. Because this airplane had a service ceiling of 25,000 feet, a good portion of the course focused on the oxygen system. Based on what I learned, and from my personal experience, we are going to focus on how to “preflight” your equipment, how to use it properly, and will consider your airplane’s performance and the weather conditions you might be facing. 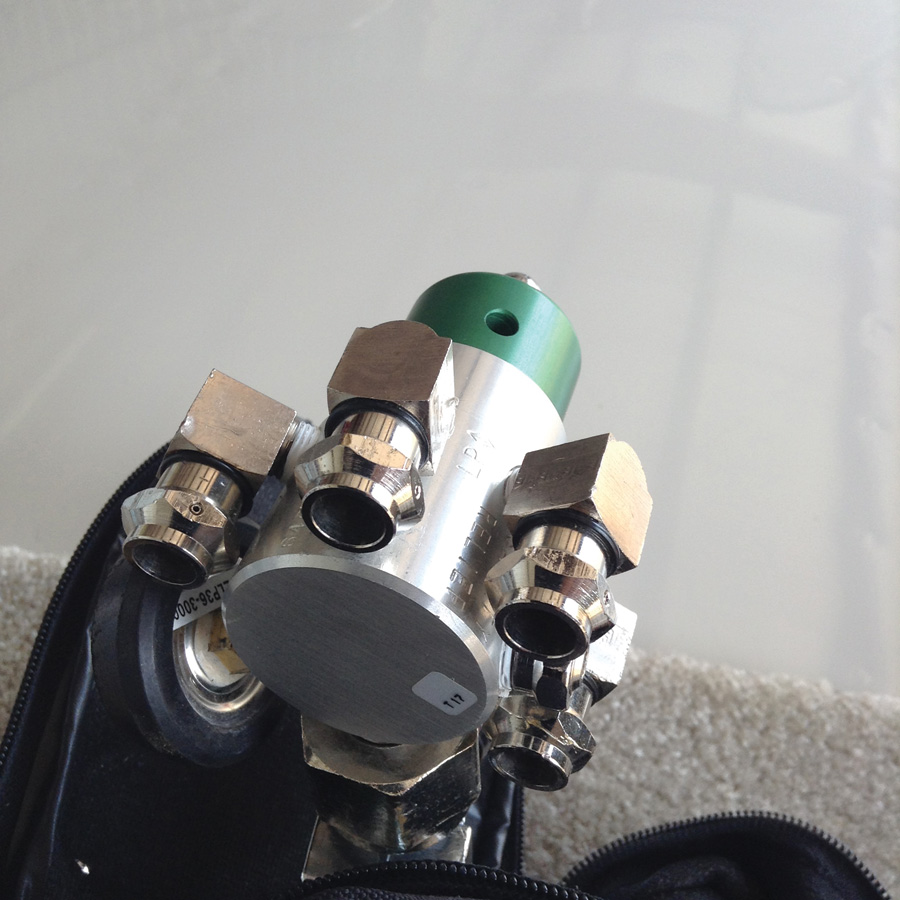 Manifold to plug in nasal cannula or mask.

If you’re using oxygen in an Experimental aircraft, you most likely have a portable system. This will consist of an oxygen bottle, regulator, and mask or nasal cannula. Let’s take a look at the individual components.

Oxygen Bottles: The first thing you need to know is the date of the last hydrostatic test. This procedure checks for leaks, structural flaws, durability, and corrosion. Typically for a metal bottle, it is done every five years. If you have a composite bottle manufactured before July 1, 2006 it is every three years. If manufactured after June 30, 2006 it is every five years. An oxygen bottle is usually heavy, so make sure it is secured for flight. It is best to start the flight with a full bottle.

Regulator: When you turn the bottle on, does the regulator leak? Regulators typically have two or four outlets where you plug in your mask or cannula. With the bottle turned on, I place a small amount of saliva on my finger and place it at each port to see if bubbles show up. There should not be any oxygen leaving the ports. In my case, where I am only going to use one or two of the outlets of my four-outlet regulator, each is checked for leaks. More than a few times I have discovered the small rubber O-rings have dried out, causing a leak. I have spares just for that reason. 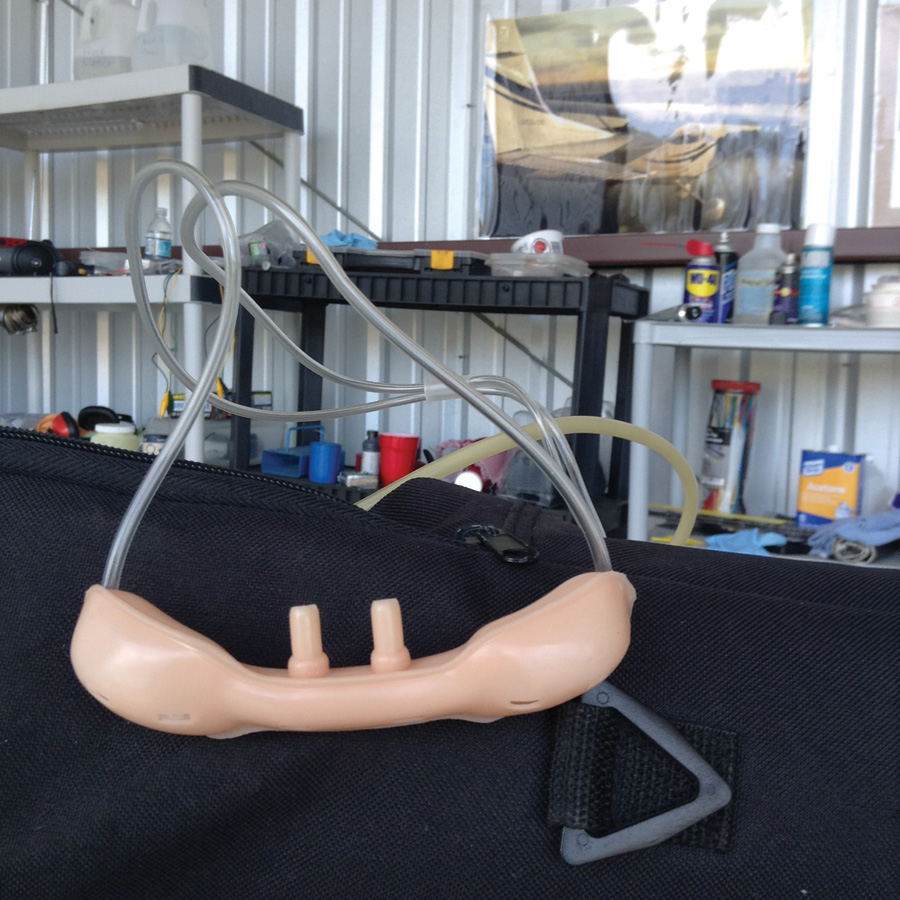 Mask or Cannula: If you are going to be above 18,000 feet, the regulations say you have to use a mask. It has been my observation that all those who have aircraft that can easily go above 18,000 feet choose to stay at 17,500 feet or lower so they can use the less cumbersome nasal cannula (myself included). 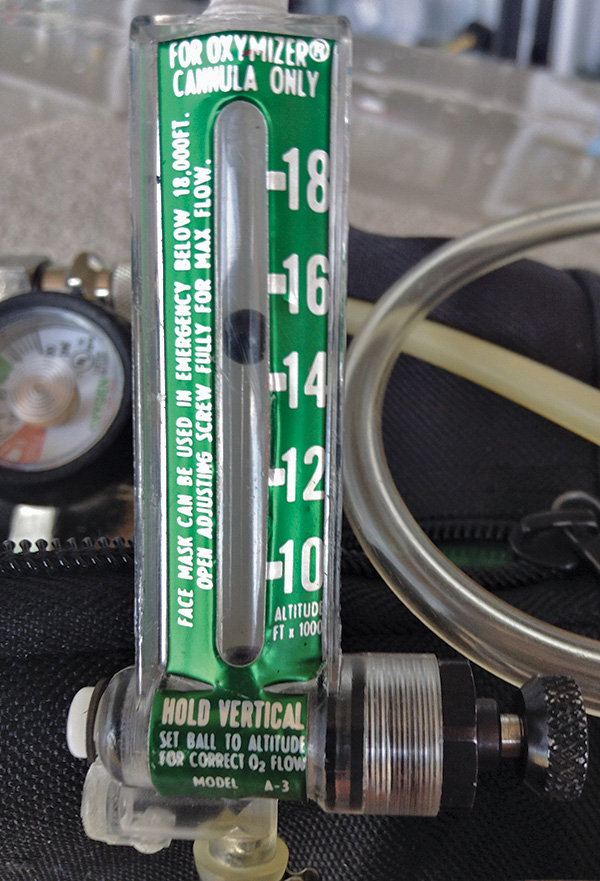 The flowmeter ball is set to the altitude you are flying at.

Here are some of the pros for using a cannula: ATC can easily understand what you are saying. Granted, some masks have built in microphones, but you sound like you are in a deep well when talking with ATC. When using a cannula, it is easy to carry on a normal conversation with your passengers, eat a sandwich, or take a drink of water, and your oxygen supply will be much slower to deplete. This being said, pack a mask should weather dictate you have to be higher than 18,000 feet.

I am not going to advocate which way to go, but I use the mustache style Oxymizer cannula with a flow meter. It is easy on the wallet, significantly extends oxygen duration, and is comfortable to use. With my current oxygen bottle size, when flying alone, I can go six hours.

Vaseline: Yes, you read it correctly. It is not uncommon for me to be on oxygen up to four hours at a time. As a result, the nasal membranes in my nose will dry out, causing some discomfort and, in some cases, a bloody nose. This may sound a bit nasty, but here is a trick that works well. Before flying off into the wild blue, use a cotton Q-tip and put a very light coat of Vaseline inside your nose passages. This will eliminate the problem I just addressed.

Finger Pulse Oximeter: I strongly suggest you use one for flight-level flying. Several different brands are available, but I’ve had good results with the Oxi-Plus Pro. At a cost of about $50, you can instantly tell your blood oxygen level and pulse rate. Normal blood oxygen level is between 95-100%. Less than 90% is considered hypoxia and less than 80% is a compromise to your organs like your heart and brain. Oximeters operate on an AAA battery. Make sure the battery is fresh before you fly. 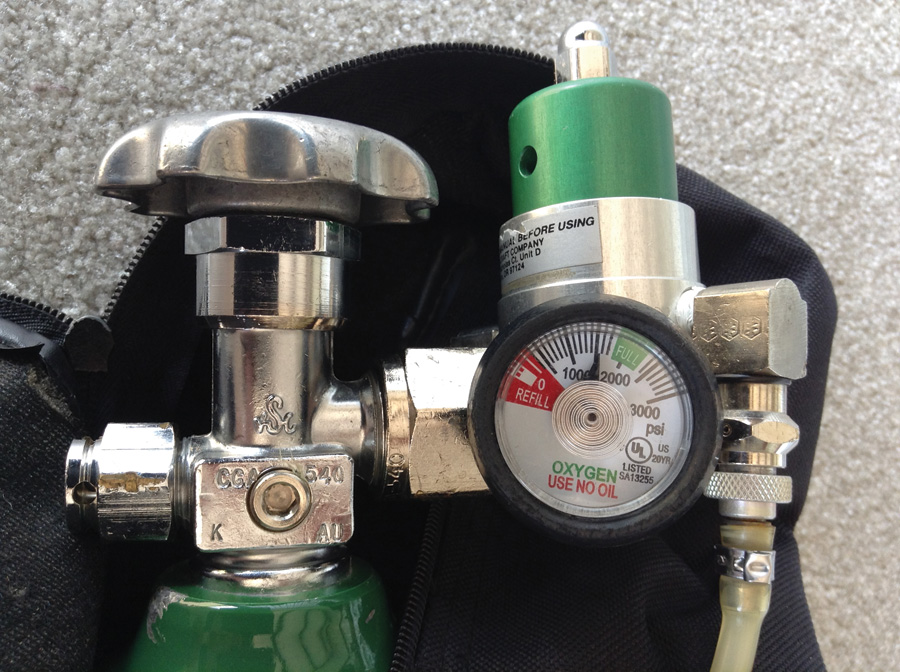 It is best to start with a full bottle and the indicator in the green area. As the bottle is depleted, the pressure will drop. Increase the flow as the pressure drops.

If you know you will be going high, have the oxygen system ready to go. Put on your cannula before taxi. If using a mask, have it around your neck. Once you are leaving 7500 feet, simply turn the oxygen on. If using a mask, lift it from your neck and put it on. This will make for a smooth, professional transition. Make sure you avoid the distraction of finding the equipment and taking off your headset to don either the cannula or mask.

You are now at your cruising altitude of, say, 16,500 feet. Of course you are on oxygen, so now what?

Every 15 minutes you should check the oxygen flow at the flow meter. As the oxygen is used up, the bottle pressure will drop. As a result, the flow meter will have to be adjusted so you have the proper amount of oxygen coming to you and your passengers. At the same time check the oxygen lines from the tank to the flow meter and your mask or cannula. You are verifying the lines do not have kinks that might reduce oxygen flow. Verify the oxygen pressure in your tank. Make sure you are out of the red arc on the gauge. This is also the time you want everyone to check their blood oxygen level. I have a Garmin 430 WAAS. In the 430 system I programmed a reminder so I don’t miss the all-important 15-minute oxygen check. If you don’t have that, I suggest a timer of some sort that will alert you. 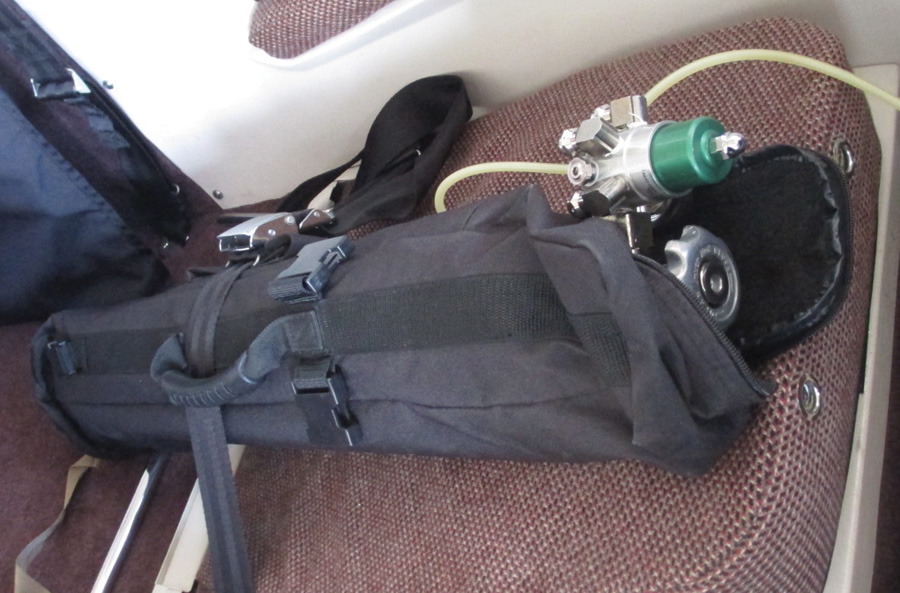 Oxygen bottles are heavy—make sure the bottle is securely fastened.

Unless you have unlimited power, you might not be able to go as high as you need to top the weather. In my airplane I have no problem going straight to 16,500 feet, but I certainly could not do that with a full load of passengers, fuel, and baggage. Give this serious thought before going throttle up. In short, know your airplane’s capabilities.

Climb-Out: OK, you’ve checked your oxygen system, and you’ve looked over the performance charts showing you can go to the altitude you need. Now it’s time for the ascent. A serious consideration is going to be the weather and at what altitude you will be in the freezing level. Typically, the best one can hope for in ice protection in Experimental or certified aircraft is pitot heat. If you have to penetrate clouds during the climb-out, you will be icing up. You don’t want to go there! Here is a recent scenario my wife and I encountered:

We were leaving North Las Vegas, Nevada, for our home in southwestern Washington state. Weather in particular was going to be nasty in the Reno area. No surprise; it was wintertime. Looking at the immediate area, I was confident we could get out of Las Vegas before hitting icing conditions. But would we be able to stay in the clear to continue up to 16,500 feet? That question was answered by scrutinizing the weather information. The question I could not answer by doing this was: What were the actual tops along the route and, in particular, around the Reno area? For this I called FSS, told them my situation and asked them to contact ATC and have ATC ask an airliner. Within a minute, the answer came back—15,000 feet.

By following the procedures I previously mentioned in this article, the flight was a pleasant one, with lots of sunshine and a fuel burn of 7.3 gph. We didn’t make record speeds, but we were safe and comfortable.

Descent: The same weather concerns that exist for the climb also need to be addressed in the descent. I was on a non-stop flight in my Glasair from the Denver area to my Washington home. At 14,500 feet and above the icing conditions that lay below, the flight was pleasant. As I monitored the weather, I noticed that freezing temperatures went down to the ground at my home airport. I also had to descend through 8,000 feet of clouds that were full of ice.

Prior to reaching the Cascade Mountains, there was a large VFR hole. I circled to descend below the clouds. By staying out of the clouds in below-freezing temperatures, my plane never picked up ice. With a 3,000-foot ceiling, it was a simple matter of flying home under the clouds in VFR weather. When you use common sense and properly use a portable breathing system, flying high is enjoyable and safe.

Gary Jones has built a Q2, Q200, and Glasair Super II-S FT. A retired airline captain, he now works as a stand-up comedian. Gary performs at major casinos and comedy clubs, and has entertained our military on a USO tour. His web site is www.garyjonescomedian.com.