Home Newsline News Over the Wall

Anyone who has spent any time in the pits at the Reno Air Races knows of “the wall” – the line of concrete barriers that separate the actual pit from the ramp. With openings at each pit aisle guarded by security personnel, the wall separates the relatively safe pit area from the ramp where airplanes are moving under their own power with swinging props and sometimes even jet blast. The ramp has never been treated casually, but it is even more tightly controlled since the terrible crash in 2011, with restrictions of when fuel trucks can be on the ramp, and who can go over the wall. 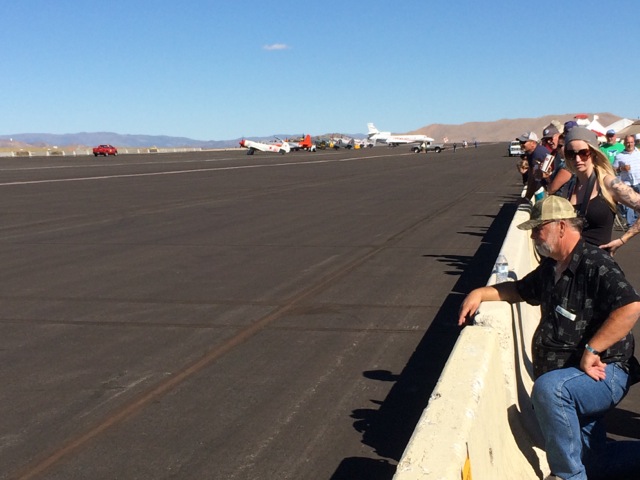 Aircraft stage on the ramp at the west end of the venue before their race, lining up as their class procedures dictate for engine start and a group taxi to the edn of the runway before departing for the heat. The pilots are required to be at their planes of course – and they obviously need a small crew over the wall with them

Each race pilot needs a crew of course – and that means that in addition to pilots, others need access to this “sterile” area at specific times. To facilitate this, and make the volunteer security personnel’s job easier, each race pilot is issued a few arm bands, color coded and labeled for their class, and anyone over the wall has to wear one to let folks know that they are allowed to be there. Other ways over the wall include getting a media vest (for photographers who want to get up close and personal for pictures before each heat), or be part of the volunteer crew for marshaling or fueling airplanes. 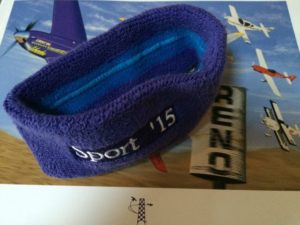 So what is it like to be “over the wall?” Well for most pilots used to walking on an active ramp, it is no big deal – except for the knowledge that there are crowds along the wall watching you as you move about. It’s sort of like being caught on stage at a play, knowing that the audience is watching – even if you don’t have a lot to do until it is time to strap your pilot in to the plane and watch as they start up. There is also a sense of exposure as airplanes on the course are pointed in your direction coming around the final turns. At least if you are behind the wall if someone were to go wrong, you could drop and shelter.

So if you find yourself on the pit wall at Reno (please don’t sit on the wall, or security will have to scold you), looking out at the folks moving purposely around the airplane, fuel trucks, and ramp vehicles, look for their arm bands, vests and badges (race pilots have badges) – you’ll know who is crew, who is staff – and, oh yeah – if you want to join them, find a team that needs some help – or next year, volunteer to make the races the work!