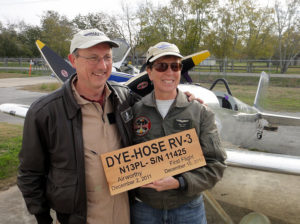 Have to share the news. The RV-3 that KITPLANES contributor Paul Dye and his wife, Louise Hose, built has flown. According to Dye, the first flight was textbook. The second ended in an off-airport landing with no damage. They flew it out and have continued testing; a mere burp, nothing horrible. Dye says he could probably write a book (or at least a chapter) on how to prepare for a first flight, and how that preparation pays off, as it did on this first flight December 10. Here’s his account of that first flight.

Sooner or later, the only thing left to do with an RV project is to go fly, and that’s exactly what we did with our RV-3 project this morning. NX13P (aka Junior for now) took wing for the first time about 0830 Houston time with a nice overcast at 4000 feet and winds behind a cold front adding a few bumps to the air. The flight-test team consisted of me as the test pilot, Louise flying the RV-6 in chase, and a few well-trusted aviation friends to help out. Our neighbor and co-worker Steve Robinson (with a Ph.D. in aeronautical engineering) acted as test director, riding in the right seat with Louise to keep an overall eye on the flight and make sure we stayed on task. Another neighbor, Dave Forster (F-1 builder/flier) acted as the ground chief to make sure that I had finished the checklist and to provide all those miscellaneous ground services like running to get my sunglasses when I was already strapped in. Ernie Butcher was the man with the camera; when we get the shots from him, we’ll post an album. The first flight began at our airpark and ended (as planned) at our neighboring field with a much wider runway. The winds kicked up when we got there, so we elected to leave both planes there until the evening calm set in.

The snapshot (from Dave) is of the post-flight. Ernie had a lot of faith, as the sign was engraved and painted before the actual event.

The airplane flew like a dream. I’m not sure if it flies straight and true hands off, as there aren’t any other places to put your hands in an RV-3 (other  than the controls)! But my initial impression is that it flies like a fabulous RV, feels light and has tremendous power/speed response. In formation to do an ASI check, I could move up or back on Louise almost instantly. Nimble is probably the word I’ll settle on for now. Temperatures and pressures were all unremarkable (CHTs all stayed below 350° – the Mattituck TMXIO might already be broken in!), and no leaks were found when we pulled the cowl after the 30-some minute flight.

There are so many people to thank for this wonderful machine, that there is no doubt I would leave important people out if I tried to make a complete list. But we’d be remiss if we didn’t especially thank Garmin and TruTrak for the chance to help test the G3X panel (I’m looking forward to actually paying attention to something other than the system’s page on subsequent flights) and GX Pilot autopilot (which I haven’t yet engaged). The WhirlWind prop is spectacularly smooth on the Mattituck engine. Van’s Aircraft has a lot of talented people making these kits and providing support (even for the -3) when we had questions (and they have no one who’s built one, except Richard VanGrunsven). All the bits and pieces we have purchased through the many vendors in the RV community have contributed to an airplane that is a pure joy to fly. I have never had a cockpit that fit so well in every way. And the RV community, those who have built -3s and the thousands on VAF who have followed the build and answered our questions along the way, couldn’t be better! Thanks to Doug Reeves for the fabulous resource called Van’s Air Force, and all the folks that populate it.

While I generally write the word “we” when talking about this project, I personally have to say that I couldn’t have had a better partner, for building and for life, than Louise. She’s really ready to honcho the next airplane project should she want, and she probably should do so without my coaching. She’s ready, just needs to get me out of the shop to make it her own. While she wants me to fly the first few hours (engine beak-in is boring I guess), I look forward to watching her lift off in this most personal of flying machines soon.

The RV-3 is one heck of a ride, and the ride is just beginning!

Kitplanes - October 23, 2019
0
A KITPLANES Roundtable Technologies develop, sometimes slowly over time, with the kind of sloth that...

Mel Asberry - April 21, 2013
0
Is an aircraft’s empty weight required on the data plate? Does the gross weight change when an LSA is converted from conventional landing gear to floats? Should engine maintenance be entered in the builder’s logbook? Does the Minimax still qualify as an ultralight?