I have enjoyed the series on home machining, and have a question for author Bob Fritz. For some time I have been considering three-in-one machines because of their utility and space savings, even though my machining skills have likely eroded some since I regularly used a mill and lathe while in the Army. There is much in various chat rooms about two of the competing and reasonably affordable assemblies, sold under the Shopmaster and Smithy labels.

One contributing factor to the affordability of these machines seems to be the use of either bushings or low tolerance bearings. I think that Shopmaster even went so far as to say it had upgraded one of its lines with Timken bearings and almost tripled the price for a very limited production run. Any thoughts about whether this can be accomplished outside of the factory? The companies provide pretty good instructions for CNC upgrades but precious little about improving the precision of the machine itself.

Bob Fritz replies: “In one of my earlier pieces I used the metaphor of whittling rather than brain surgery as a way of encouraging new users to not be intimidated. That was also due to the fact that these machines are, as you correctly surmise, a trade-off between cost and precision. How to upgrade a low-cost machine is a great topic and something Im sorely in need of doing on my Shopmaster. I definitely would not convert it to CNC without that overhaul; its barely able to do the work I want as it is. In defense of these manufacturers, Ill not use the word quality to denigrate what they deliver simply because, as I said in a previous issue, quality is the ability to consistently deliver what the customer expects. In fact, thats a good introduction for an article on overhauling a low-cost machine now that you, the reader, have higher expectations. Can such an upgrade be accomplished outside the factory? Undoubtedly. It may require taking some of the parts to another shop for re-machining, but its certainly worth looking into. Can it be accomplished for less than the $15,000 that Shopmaster charges? Without a doubt.”

An active plansbuilt design slipped through our net for the January issue. Its the Design Resources J.D. Special. This is a composite, sheet metal, wood, fabric and tubing low-wing single-seat monoplane that would take a beginner 2000+ hours to build, according to the company. Cruise is 138 mph from a 90-horsepower Continental C-90. Plans are $235. Contact Design Resources at 830/792-2133.-Ed.

Fly Back to Me, Baby

I just received this years plansbuilt issue of KITPLANES and was surprised by the omission of the venerable Bowers Flybaby. Are the plans for this worthwhile project still available? I would also like to thank you for the fine article by Mr. Fuentes on truly affordable aircraft building. He mentions a Bruce King and his BK-1. Perhaps you could cover this aircraft in a future article, as I have not heard of this plane before. Keep up the fine work.

We didn’t get anything back from the company until three weeks after the deadline. The plans are still available. Write to David R. Bowers, 13730 Burke Road, Los Altos Hills, California 94022.-Ed.

John Snagged Another One

I enjoyed your article about the Falco. I am currently two and a half years into plans building a Falco of my own. When I was deciding to build a Falco, I called Kris Shipler and met with her at Chino to look at her fathers Falco. That was it. After seeing it, I started almost immediately. I can really identify with your description of endlessly sanding and fitting and jigging until its perfect. You nailed it right on, the journey is the point. Incidentally, Im guessing its going to take me about 10 years to build my Falco. Imagine what can change in 10 years! I cant. Thanks for the article,

Ishmael Hits One on the Head

I wanted to say how much I enjoyed Ishmaels “Flying in a Ford World.” He is “right on” and I am also glad to see KITPLANES doing better with the educational type articles this year. I would bet 80% of your readers fit in the Ford world and are not even interested in a glass cockpit $250,000 Wonder Whiz.

We have a few millionaires in our group, but 99% of us live in the Ford world and build accordingly. The big mistake Sport Aviation is making nowadays is just that. All the airplanes they feature are $200,000 Wonder Whizzes, and 80% of their members live and build in a Ford world. That is not grassroots aviation at all. Keep up the good work, and remember there are many more folks in the Ford world than in the Wonder Whiz world. 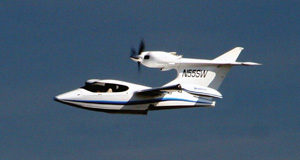