Three years ago, I wrote about the Experimental Light Sport Aircraft (ELSA) 16-hour Repairman Inspection course conducted by Rainbow Aviation of Corning, California. Successful completion of the class allows the graduates to perform the annual condition inspection on any ELSAs that they may ever own. More recently, instructors Brian and Carol Carpenter held two-day courses at Independence, Oregon, for two groups of 16 each-the maximum allowed by the FAA, which sets the course rules.

As an auditor who was present in 2007 only to write about the course, I neither took the exam nor got the completion certificate. I didn’t need the course, as I had no prospect of owning an ELSA. But things change. As you know if you have seen my recent reports in this magazine about building a Vans Aircraft RV-12 ELSA, my wife and I now own one. The first annual condition inspection comes up in October this year, so I registered and paid the $375 to take the Carpenters course during their return to Independence in December. 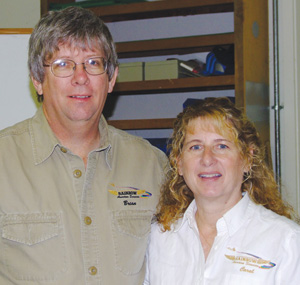 From that point on, however, the two certificates differ a lot. The EAB Repairman Certificate applies to the one homebuilt aircraft noted on the document-regardless of who subsequently owns it-and the privilege is not available to anyone but the original builder. Unless the builder is willing to inspect the named aircraft for the new owner, the plane will have to get its annual condition inspection from an FAA-certified A&P mechanic.

Contrasting this, the ELSA Inspection Certificate offers subsequent owners the same privilege the original owner enjoys. The buyer can take the 16-hour inspection course and then perform the annual condition inspection just as the original owner could. Also, the holder of the original ELSA Inspection Certificate does not lose the privilege when the original aircraft is sold. If that person builds or buys a subsequent ELSA, the FAA will issue a new certificate for the new aircraft to the new owner who graduated from the 16-hour course. There is no need to take the course again. There’s this caveat, however: The new aircraft must be in the same category as the original. There are separate 16-hour courses for airplane, weight-shift and powered-parachute categories. If you cross categories, you will need to take a new course for privileges in the new category. 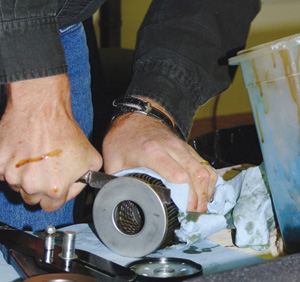 Once Again: Whats an ELSA?

Confusion about ELSAs has resulted from the fact that there have been several types of ELSAs including two kinds of former ultralights: illegally heavy (fat-more than 254 pounds empty) and previously waivered two-seat trainers. Both had a grace period to get an FAA N-number and become ELSAs. The grace period has expired, and the owners of those newly FAA-registered aircraft now need at least a Sport Pilot license to fly them. The FAA says it will prosecute those ultralight pilots who continue to fly heavy ultralights or unregistered two-seaters.

The other category of ELSA is an aircraft built from some sort of a kit based on an FAA-approved Special Light Sport Aircraft (SLSA). SLSAs are factory-built and comply with the many ASTM-coordinated consensus standards including design, manufacture, testing and extensive documentation. The Vans Aircraft RV-12 is in the forefront of this type of ELSA with more than 250 kits under construction or completed. The ELSA RV-12 kit is based on the red RV-12 factory prototype, which received its SLSA designation in July 2009. The major-portion (51%) building rule does not apply to ELSAs.

Unlike three years ago, the 16 recent Rainbow Aviation Repairman Inspection course attendees had a specific ELSA in mind. Eight are either building or flying their kit RV-12s, and others are thinking about ordering one.

In the Carpenters ELSA inspection class in 2007, few of the 32 graduates had an ELSA, but the course certificate could be exchanged at an FAA office for the Repairman Inspection document whenever the graduate obtained an ELSA.

Carol holds California teacher credentials and developed the FAA-approved course curriculum, along with the content of Rainbows three-week LSA maintenance course. She teaches much of the regulations-based requirements portion of the course such as how to endorse aircraft logs, performing and logging regular ELT inspections, researching service bulletins on the Internet, and how to find useful links for maintenance and inspections. 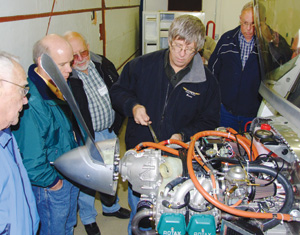 The class witnesses a differential compression test on a Rotax 912ULS engine.

Brian began as he did three years ago with a brief, excellent reminder of aerodynamic basics including use and importance of the coefficient of lift, angle of attack and aircraft loading. One quarter of the course is hands-on learning. For that, my RV-12 was used to demonstrate reading spark plugs and analyzing differential compression tests on the cylinders. (Unlike many other four-stroke engines, a Rotax 912 shows almost no loss of pressure-which represents air leakage through intake or exhaust valves or by cylinder rings. Thats because a liquid-cooled engine can have much tighter clearances than an air-cooled one.)

Other hands-on demonstrations included cutting a used oil filter and analyzing what the filter caught, carburetor theory and internal inspection, and identifying hardware. Did you ever see an AN3 aluminum bolt?

Three years ago, many of the students were flying with two-stroke engines. This time, only a few of us were interested in these engines, but Brian spent time on essentials, noting that two-stroke fliers in his area have stopped having engine failures because they took his advice.

He strongly recommends returning two-stroke engines to factory settings before making changes when a problem occurs. Changing carburetor jets or needle position can mask the real cause of troubles, he noted. One pilot at his airport spent most of a frustrating day trying to achieve factory rpm specs by making a series of adjustments. Using a handheld optical tachometer (ones for model airplanes work well and are inexpensive) confirmed Brians perception that the aircraft tach was highly inaccurate.

The class concluded with an FAA-required written critique…and then a 50-question test. Everybody passed. Those with registered ELSAs will get an appointment at the nearest FAA FSDO, taking along the class certificate and aircraft registration documents. A fancy new plastic wallet card, similar to the new pilot licenses, will follow the temporary paper in a while.

Ill get to work early in October on my RV-12s first annual condition inspection. The required checklist is long, and most of the tasks look like theyll be fun. 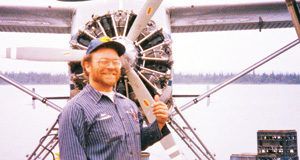