I really don’t remember when I first heard about them or perhaps first saw one. It could have been on one of my early cross-country flights that I happened to notice airplanes parked in backyards. I do know that once discovered, it became a dream—that of living in an aviation community. And it came true. Twice now. And it is all I ever hoped it could be. Those of you who happen to be living in an aviation community can understand what I am referring to, but for those aviators who aren’t, perhaps I can help you to dream as well.

For the past 12 years we have been living at Mallard’s Landing in Locust Grove, Georgia, just south of Atlanta. For five years prior to that, we resided at another community called Stoney Point Field, on the north side of Atlanta. Here’s my reply to those who ask about living with our airplane: “When we die, if we get to go to Heaven, it will be a lateral move.” Let me tell you why. 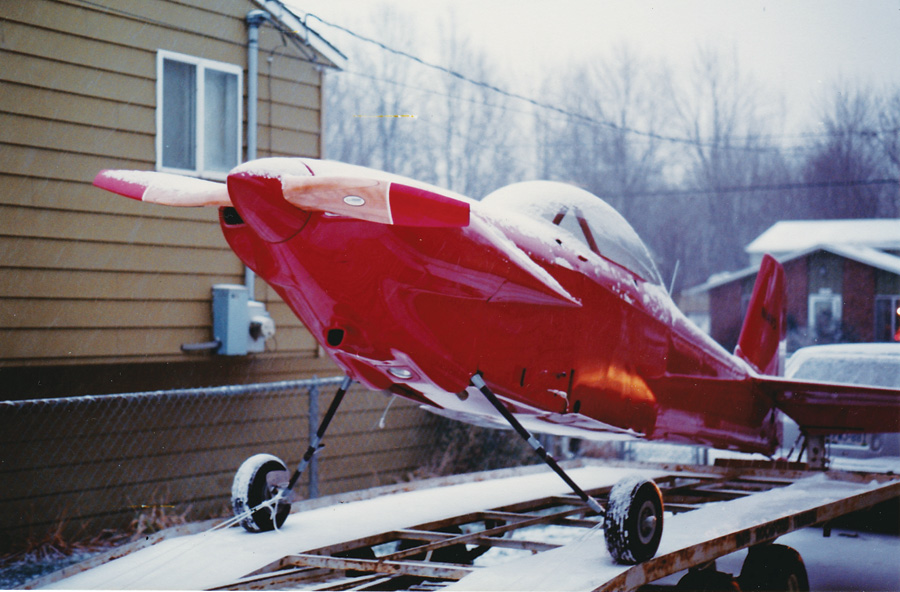 Here’s the RV-4 loaded on a trailer for the move to the airport, just as an unforecast snow storm moved in.

No Drive to the Airport

One of the things I noticed early on with airplane ownership was that the airplane was located at an airport some distance away from home. This became very apparent when the RV-4 was first relocated to the airport after two years of construction at home. And of course we moved it during one of the coldest winters I ever remembered. It was below zero every day for weeks! So not only was I reluctant to go to an unheated hangar, the drive time to/from the airport was certainly non-productive and time-consuming.

It soon became clear that the aircraft TLC department was suffering a little. Later on I noticed that when we got back from a flight, Carol was anxious to go home, while I was more wanting to do a post-flight and clean the airplane. And as the family grew to four and we moved into bigger airplanes, the scenario was the same. We would land, everyone wanted to go home, and I wanted to tidy up the airplane. Of course, I could always go back to the airport, and I did, but that was time away from the family. And there was always something at home that I needed or vice versa; I would end up leaving something at the airport that I needed at home.

Here’s a little funny event that didn’t seem so funny at the time. During the construction process of the RV-4, I heated the two-car detached garage workshop. I think better when I am warm, and working with aluminum seems to create more chill in the winter. On Christmas Eve Day, the planned day for the move to the airport, it was bright blue skies when we got up, so we went and rented a flatbed trailer. Unfortunately, by the time we were done loading, an unforecast, typical lakefront snowstorm had moved in. It was a very stressful drive to the airport, luckily without any problems. However, back at the garage, I had turned the heat off as we loaded the last items. A propane torpedo heater provided the heat, and it kept the temps nice and toasty. Later that night, as I was in bed, I heard water running, but didn’t make the connection until I got up in the morning and went out to the garage and saw the huge mess. The water line had frozen (-10F will do that) and the busted pipe was now spewing water across the garage, workbench, and all of my tools, and freezing solid. What a disaster!

After the RV-4, I trailered the Kitfox for nine years to various airports. The folding wings on the Kitfox saved on hangar rent and the TLC factor went back up. Having it at home in a drive-under basement was fun. Of course, access to local airports was a whole lot easier before 9/11. 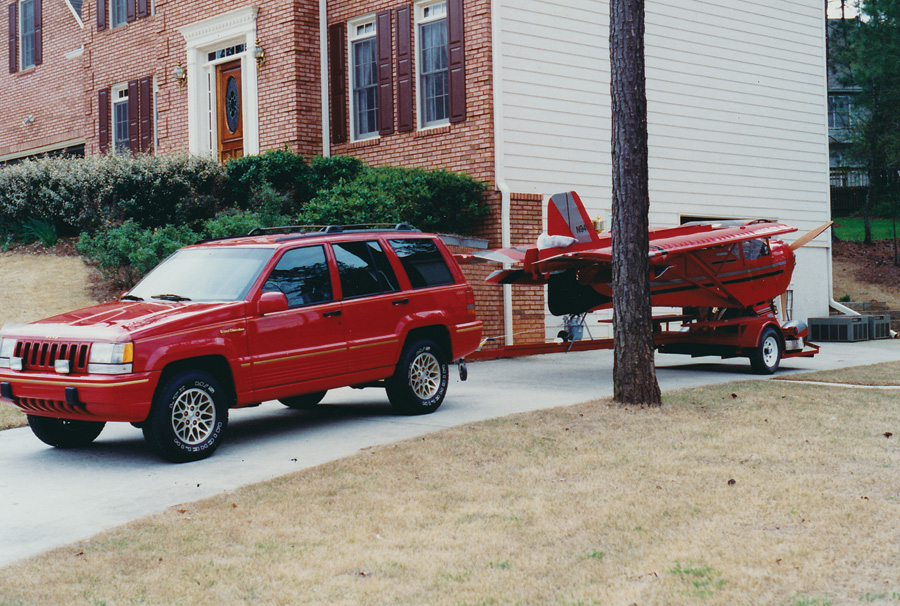 The Kitfox’s folding wings sure helped to save on hangar costs, as well as increasing the TLC factor on the airplane. Maintenance at home was much easier.

The Good and Not-So-Good

A lot of that has changed with having the airplane right at home, some for the good, and some for the not-so-good. The not-so-good is really small and has to do more with self-discipline than anything else. Of course, as pilots we all know how addictive airplanes can be. It can be really hard sometimes to not go out to the hangar. After all, there is always something to mess around with. A really funny thing happened to make this point clear to me. One day we took our 3-year-old granddaughter for her first airplane ride in the RV-10, and afterwards we were all looking at the pictures. It was a typical discussion with a 3-year-old of showing pictures and asking questions. One picture showed her in front of the RV-10 and our house was in the background. When Carol asked whose house that was, she responded, “Grandma’s.” We all hung on the reply to the next question, “Where does Grandpa live?” Without missing a beat, the answer was, “The hangar.” Busted by a 3-year-old! Oh, did I tell you—our oldest son and his family (7-year-old granddaughter and 1-month-old grandson) live right across the runway from us? Taking her flying in the Kitfox to see the Christmas lights sure is a lot of fun.

As for the good, I could go on forever. Clearly the airplanes get a whole lot more TLC than they ever did. They are usually in tip-top shape and always ready to go. And there is no need to arrive early to pre-heat if required. It’s just a matter of plugging it in the night before on the way to bed. I also don’t mind doing projects that might spread out over a couple of days, if necessary, spending a few hours each day, as opposed to spending a whole day at the airport, or making several trips to get more tools. Oh yes, I do have some duplicate tools because Sears or Home Depot were closer to the airport than home. And now it is so nice that when we come back from a trip, I get to finish up putting the airplane away just about the time dinner is ready.

And here’s something that happens much more often than it ever did when the airplanes were based at the airport: short local flights, sometimes just to see the sunset. Once in a while (actually quite often in Georgia, especially in the fall), just after dinner, the air is really calm, the sky is beautiful, and it just begs you to go flying. No problem when the airplane is only a few steps away. And the family also seems more willing to go along since the ride to the airport is no longer required. Sometimes I swear it is the airplane that pops up with the idea. I know if I were an airplane, I would certainly want to be getting out of the hangar. At least that is my story, and I’m sticking to it. 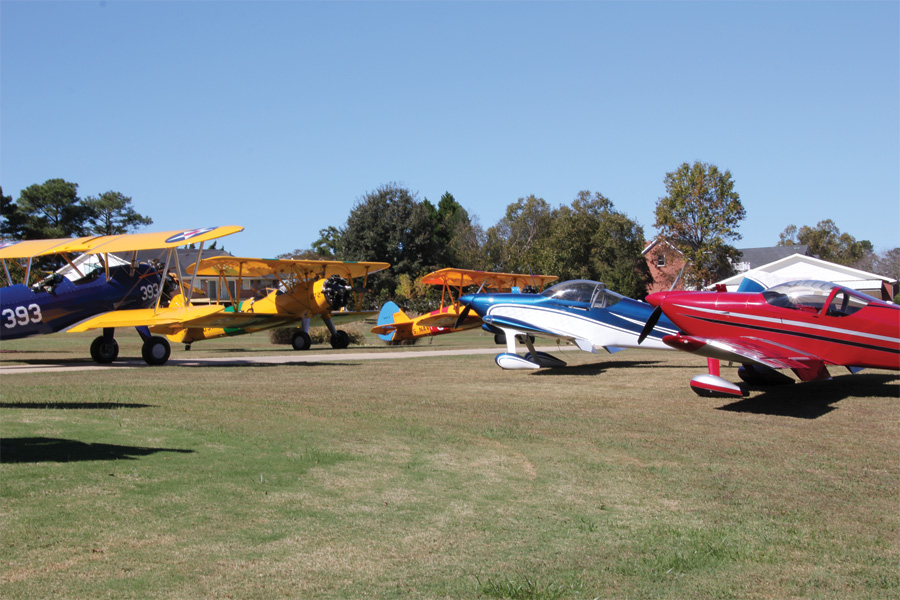 The Community Fly-In At Mallard’s Landing usually has lots of airplanes in the author’s backyard—a dream come true!

There’s a much larger aspect of living in an aviation community that I want to share with you, especially from what I have seen in ours that has over 120 families residing here. There is a wealth of information across many segments of aviation, from military, corporate, airline, and general aviation, along with lots of aircraft construction and repair constantly occurring. It is a bustle of activity, and if you aren’t careful about when to leave your hangar door open or closed, you will get all kinds of visitors.

A long time ago we decided that the community would also be family-oriented. After all, we can’t fly all of the time, and it is nice to have the family around! So, we put in a nice community pool, upgraded the tennis courts, and added a playground—mostly with volunteer work! It’s been really cool watching the families grow, and especially seeing kids solo, and even go off to aviation schools or the military. This summer one of the kids was accepted into Naval Aviator Flight School. His parents sure are proud! The rest of us are jealous, of course.

It seems pilots of all walks are into sharing, from Angel Flight organizations to Pilots N Paws. Pilots at Mallard’s aren’t any different. Twice a year, usually in May and October, we have a Saturday Aviation event where we invite family, friends, local neighborhoods and schools to participate in a day of flying and eating—all for free. Luckily, we have lots of volunteers who cook and serve the food, along with pilots who volunteer their aircraft. Throughout the years I have sometimes flown for eight hours in the Stearman, giving rides to lots of Young Eagles and their parents. It is very rewarding to see all of the smiles on the kids, but the most rewarding is that twice so far, a Young Eagle has returned and told me that they got their license after that flight with me. Hearing “Mr. Vic, I got my license!” was way cool. I sure wish this had happened when I was young.

I know we have inspired some kids to begin their own fun journey in aviation. And it is nice when our friends drop in to see us and park their airplane in our backyard. If someone had told me when I was a kid that this would happen, I would have thought I was dreaming. I guess some dreams can become reality!