In April of 2005, the FAA approved the first of more than 100 new aircraft models in an entirely new category. These airplanes became Special Light Sport Aircraft (SLSAs). They are factory-built, ready-to-fly designs that meet LSA definitions including not more than two seats, 1320 pounds maximum gross weight (1430 for floatplanes and amphibs), 120-knot top level speed (at sea level) and not more than a 45-knot clean stall speed for airplanes.

These aircraft may be flown by pilots seeking the new Sport Pilot category of pilots license that is confined to day VFR flying and should result in about half the expense of acquiring a Private license. Sport Pilots may also fly other aircraft that meet the LSA definition including many Experimentals and a few type-certified designs such as the Piper J-3 Cub and Aeronca 7AC Champion.

Dan Johnson, who wrote this column for more than a decade, may be the foremost authority on tracking the LSA industry. With the assistance of his associate, Jan Fridrich, he provides statistics on his web site (www.bydanjohnson.com), showing that 2009 was, as expected, a tough year for progress in the Light Sport category with SLSA FAA registrations down 42% compared with 2008. The remainder of general aviation, however, was off even more, with new registrations down about 50% during 2009. 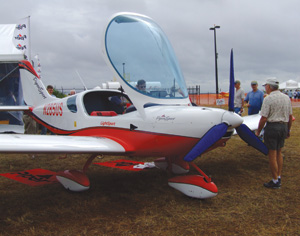 Piper Aircraft introduced its PiperSport LSA. Built in the Czech Republic, it waspreviously marketed as the SportCruiser.

Sebring to the Rescue?

Another measure of LSA activity is the annual snapshot called the U.S. Sport Aviation Expo, better known as the Sebring Expo. Since early 2005, retired Army veteran and businessman Bob Wood has headed an all-volunteer crew of about 250 people who run an unusual four-day, all-LSA/ultralight event at Sebring (Florida) Regional Airport. An objective from the start was to provide a low-cost, exhibitor-friendly show devoted to Light Sport aviation.

A main feature of the event is the chance for maximum flying. Unlike other shows that prohibit or discourage on-site demo flights with prospective customers, Sebring makes it easy to get exhibitor aircraft to a special runway-the east 900 feet of Runway 14/32-where folks fly with hand-signal guidance from ground personnel. Both of the patterns give spectators a closeup look at LSAs in the air.

Scene and Not Seen

This year, Sebring was the venue for dozens of SLSAs and for a major rollout.

First-time exhibitor Piper Aircraft introduced its new SLSA: a rebranding of the sleek SportCruiser all-metal SLSA as the PiperSport. Quite a crowd of journalists and others were on hand for the announcement by Piper CEO Kevin Gould as two newly decaled PiperSports taxied into view. Piper has a distribution partnership with the Czech Republic manufacturer. Current SportCruiser owners will find support at Piper dealers, and some SportCruiser dealers will become Piper dealers for the new airplane. One of the two PiperSports at Sebring left suddenly to prepare for a Boeing 747 hop to Singapore for a week-long airshow; the PiperSport sent earlier by ship was delayed in transit. I flew the remaining one with company pilot Bart Jones and will report on it in a future column. It flies beautifully, by the way.

At Sebring 2009, the mockup of Cessnas Chinese-built SLSA Skycatcher was shown, and this year the first imported production model was present. Delivered for Cessna CEO Jack Peltons wife, Rose, Skycatcher No. 1 was flown before I arrived but was tethered to its space at the front gate. Cessna announced adelivery delay of six months or more as modifications are made, resulting from flight tests. Cessna holds more than a thousand $5000 deposits for Skycatchers.

Disqualified in nearly every part of the LSA definitions (speed, weight, constant-speed prop, for example), the demo LoPresti Swift Fury, piloted by Corky Fornof, was present again. At the other end of the spectrum, two versions of the new Belite ultralight were in attendance, offering a wide range of options (several two-stroke engines, steel-tube or carbon-fiber materials, factory-built or kits).

A blue factory-owned Vans Aircraft RV-12 Experimental-category LSA, built and piloted by Mitch Lock of Maryland, attracted a crowd on the ground and accommodated a number of RV-12 kit builders in the air. 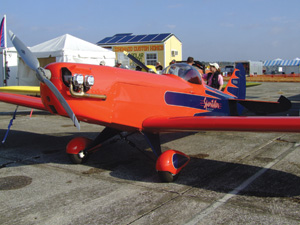 The Warner Aircraft Sportster in its convertible single-seat mode. Two other fuselage tops turn it into a two-seater with a bubble canopy or open cockpit with two windshields.

Tecnam announced the new high-wing P2008, another really nice-flying SLSA that will be reviewed in this column. I also flew the pre-production version of the MySky MS1, an all-composite tandem seater with a single-piece canopy hinged in the rear like many modern two-seat fighter/bombers. Sidestick controls with pitch trim, flaps and push-to-talk switches on the sticks provide fighter-like ambiance. Are the other stick switches for guns and missiles?

Also sampled was the latest version of the Opus ARV Super2, a side-by-side shoulder-wing design originally promoted by land speed record holder Richard Noble in the 1980s. My flight list this time was rounded out by the X-Air from Bend, Oregon, (originally Australian) and the mostly carbon fiber Dynamic from Dynamic Aero.

Two kitbuilt examples of the Warner Aircraft Sportster were on display. The Sportster is the metal-wing evolution of the Anglin Spacewalker II, and its truly an airborne convertible. Changeable forward fuselage tops make it into an open cockpit two-seater like the Spacewalker, or a single-seater with a bubble canopy, or a two-seater with a pair of bubbles. Changing configurations takes only 5 minutes, the company says. Expecting an appearance by Randall Fishman and others with flyable electric airplanes, I was disappointed that none attended this year.

Just before show closing time on Sunday, Wood compared this years event with 2009s. This year the number of inside exhibitors is down a little, he said. Outside is about the same or a bit better than last year. Five large tents housed more than 80 inside exhibitors, and outside spaces totaled 87. All but a few were occupied. The crowds on Thursday and Friday were down because of weather, but Saturday was the best day we’ve ever had, he said. 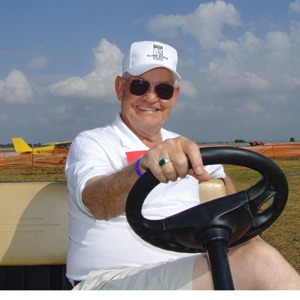 Show director Bob Wood was pleased with this years turnout.

Saturday was exceptionally busy, both on the ground and in the air. Low clouds on Sunday morning contributed to a low last-day turnout. But overall its been a great show, Wood said, and most important, it has been safe. And I know from talking with maybe half the exhibitors this year that about 18 airplanes have changed hands here. That compares with about 25 planes total last year.

No date has been set for 2011 because Wood coordinates with the race schedule at the Sebring International Raceway. Race noise is a problem, so we schedule around the race dates as soon as the schedule is known. What we’ve had this week…car clubs and race-driving schools…have been mostly bearable, he said. Its been a good show.

Sebring Expo 2010 reflects the effects of the recession, but it also reveals the resilience of the LSA market, its potential customers, and of Bob Wood and his 250 volunteers. They make a difference.

For next years show dates and other information, visit www.sport-aviation-expo.com.

Dean Sigler - May 18, 2011
0
Great predictions about the advent of reliable, readily available and affordable electric aircraft have come and gone. How far away are we? By Dean Sigler.