I have been writing this blog called Kneeboard Notes for about four or five years now, and one thing I don’t think I have ever done is to show what my ACTUAL kneeboard notes look like. So here you go – a close-up view of what is usually on my kneeboard. On the back of all this tabular data are my notes to myself – the things that create story ideas that occupy my mind as I am cruising along in the smooth cool air up high while the autopilot software and servos do their thing. I’m not going to show those ideas obviously – first because who wants to give away story ideas, and second – not all of them are ready for prime time – or even the Home Shopping Network. Those get flushed before anyone sees them, so we’ll leave them alone.

But the front is where I record the minimal data I want for each mission. I collect it on these forms (which I have painstakingly developed for myself over decades), and then once in a while, when I’ve accumulated enough so that I am afraid I’ll forget what I did, I go get my logbook and transfer the notes over. Back when I was a budding new pilot, I had those complete flight planning sheets that showed courses, headings, times and fuel usage between checkpoints that were ticked off on the pencil lien we drew on our paper charts. There is still value to learning navigation that way (just in case your five GPS receivers and four moving maps all quit at the same time), but nowadays, a typical flight sees me typing in “Direct to” my destination, rolling in an altitude and letting her go. That’s VFR of course…if I am going IFR, I have a different form – but this still serves as my logbook record of the flight.

Part of the difficulty in having a hangar full of airplanes (in addition to having to keep them all fed, watered, and annualled) is that you can lose track of what you’re flying – especially when you spend a lot of time flying other people’s planes. So I always put the N-number down, and circle it. Then I keep track of block in and block out times, as well as fuel for each case – this assures that I have actually CHECKED the fuel before flight, and consciously set a bit in my mind about how much is there. I then record the elapsed time for each flight, and Hobbs or tach hours on the airplane at the end. Departure and arrival airport designations help me remember what I actually did, and I’ll make a little note if I did something really out of the ordinary (“first flight of the jet!”…or….”IFR Currency – six approaches”). Down at the bottom, there is some white space for things I can’t keep in my head – upcoming frequencies, or a route I am transferring from one device to another (that won’t talk to each other).

So that’s pretty much it. A creature of habit learned over long decades, I can’t even bring myself to start an airplane if I don’t have a kneeboard strapped to my leg, so I always have something on which to jot things down. And now you know what goes there… most of the time. 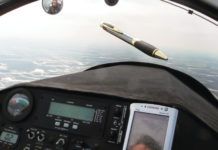 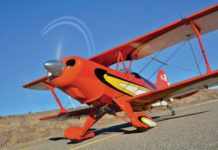