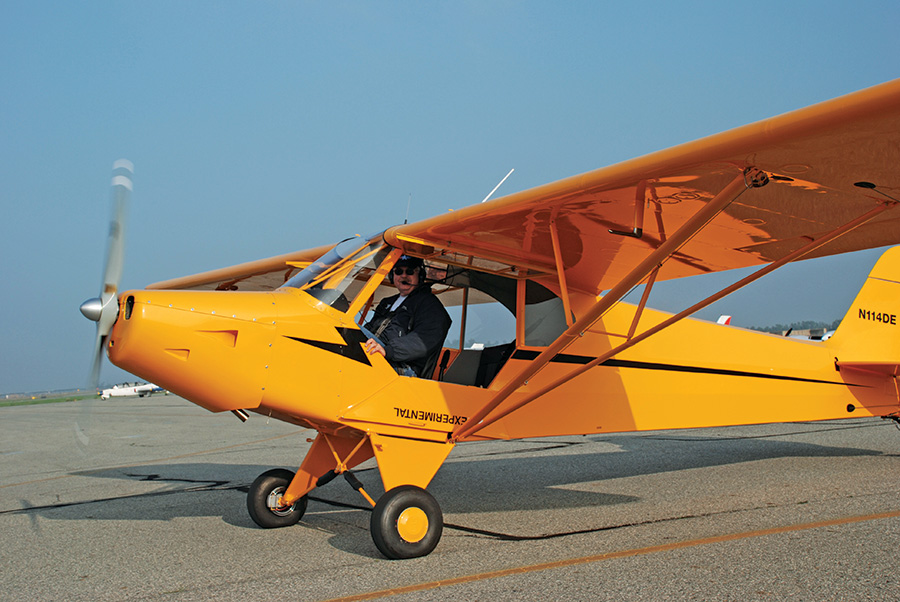 When you’ve been in the aviation community long enough, you’re going to have stories of lost friends. It is never easy to hear, and we all get angry when someone dies in an airplane—angry at the airplane, angry at the weather, and maybe angry at them. It is hard to lose friends, so when we first heard of contributing editor Dave Prizio going down in the Pacific Ocean off Catalina, we held our breath until we heard the rest of the story. Dave and his passenger were OK, despite the loss of the airplane. We mourn with Dave about the disappearance of his beautiful Cub below the waves, but rejoice with him that all he got was a scratch, a broken little finger—and wet. We asked if he’d tell the story, as a lesson to all of us to remain always vigilant, always prepared, and to always think ahead and ask, “What if
I lost an engine right now?”

With a few weeks having passed since my ditching on the way to Catalina (KAVX), I finally had time to calm down and reflect on what happened. It all began with our typical debate about where to fly for Saturday lunch. Someone suggested Big Bear Lake, a nearby resort nestled in the San Bernardino Mountains. It is a pretty spot with a good restaurant and low fuel prices, but at 6700 feet it can be a bit chilly in the winter and sometimes windy in the surrounding mountains. I suggested Catalina as an alternative. It is closer and warmer and scenic in its own way, although the landing fee usually keeps us from flying there more than once or twice a year. It had been a long time since we had dined on buffalo burgers, a Catalina specialty, so we decided to go there.

We grabbed the life vests, at least those of us who had them, made the usual jokes about going swimming, pre-flighted our planes, and off we went, never suspecting how prophetic our little jokes would turn out to be. It was a beautiful Southern California day with perfect temperature and only high scattered clouds. We climbed around the east side of John Wayne’s Class C airspace and turned towards Catalina when we reached the shoreline.

There were four planes that day. Some of us decided that 6500 feet was high enough for the crossing, others went up to 8500 feet. Neither altitude will guarantee a safe glide back to land for the entire trip, but obviously, 2000 extra feet of altitude makes the wet zone smaller, the wet zone being that portion of the trip where a water landing is inevitable if the engine were to quit. In the Cub, the kit version of the Legend Cub that a good friend and I had built some four years ago, we decided on 6500 feet. The total crossing distance is about 30 nm, with a wet zone of about seven miles skewed towards Catalina because the airport there is at 1600 feet, and the terrain between there and the ocean is unusable as a landing spot.

Somewhere near the midpoint of the crossing the engine simply quit, for what reason we will never know. What an odd and uncomfortable feeling. This is something you read about, talk about, and practice every now and then, but you never really believe that your engine is going to quit. Initially there is that period of shock. How the hell could this be happening to me, and here of all places? I am pretty good at math, but it didn’t take too much fancy calculating to figure that we were not going to make it to anyplace that included dry land. We were in exactly the wrong place to glide anywhere but the Pacific Ocean.

At this point that old admonition, “Fly the plane!” came to mind. I set up a glide at 50 knots and started going through the drill. Check fuel valve, apply carburetor heat, check ignition, check circuit breakers, attempt restart, try it again. Darn! (Or something like that.) This thing isn’t going to run. Get on the radio and squawk 7700. We were already on Catalina CTAF, so I called them first. “Mayday, mayday, mayday. Cub 114DE is 15 northeast on a heading of 240 degrees towards you. We have had a complete engine failure and will not make it to the airport.” 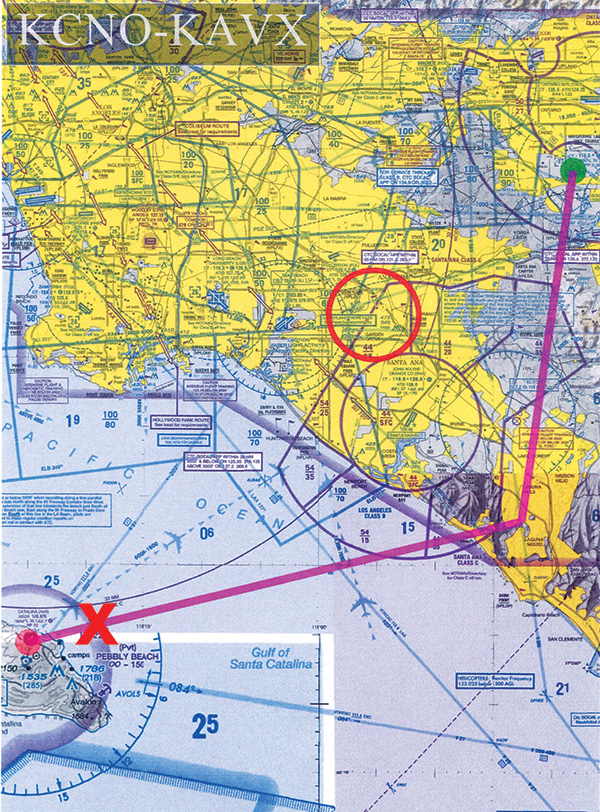 “X” marks the approximate location of the ditching.

What a strange feeling it is to make such a call. I had this odd sense of detachment from the situation, calmly going through the steps I knew I had to perform, yet somehow not really ready to embrace the concept that I was going to land in the ocean soon. Catalina gave me the frequency for SoCal ATC, so I switched over to them and gave them the same call. I suppose they were glad to talk to that guy who had just lit up their radar screens with the emergency squawk. They calmly asked that most appropriate but somehow never welcomed question, “What are your intentions?”

The answer you would love to blurt out is, “I don’t know. Just make it go away!” But, of course, that is not one of the available choices. “We will continue our glide on this heading and look for a boat. We will not make it to the airport. Please notify the Coast Guard and let us know where they are,” I said, not realizing that the Coast Guard really doesn’t handle such emergencies in the Catalina Channel. Los Angeles County Baywatch does. (Yes, just like the cheesy television show.) In any case they weren’t close enough to meet us upon our “arrival.” We spotted two private pleasure boats. One was closer and perhaps bigger, so we headed towards it. The plan was to circle them once and land right in front of them, so they would be sure to see us, which is exactly what we did.

As we approached I did a quick briefing with my back seat passenger, himself a pilot. One last attempt to restart. Nothing. We gave SoCal one last call, opened the doors on both sides to give us the best egress possibilities, tightened out belts and turned into the wind. Mercifully the sea was pretty calm, so swells were not a big concern. All I could think about was slow it down and keep the nose up. I just didn’t want to flip over. The rest I wasn’t all that worried about. Airspeed was down to about 30 knots after the final turn. Slow enough, even in the Cub. Hold that attitude and just wait for it.

The things that struck me about the touchdown were the pitch down of the nose, which I expected, and the sudden rush of water that somehow I didn’t really expect, at least not with that intensity. The Good Lord being with us, we stayed right-side-up, but the cabin was completely full of water in an instant. My back seat passenger Bill was out the door in a flash, as we had briefed, a feat he could never have performed on dry land with such speed and grace. I was a bit disoriented by the sudden onrush of water but regained my composure after only a few seconds. Bill said it took me about ten seconds to come up after he had surfaced, but time is hard to judge in such tense situations. I never had the thought that I wouldn’t make it, but I was sure glad to take a breath of air again. 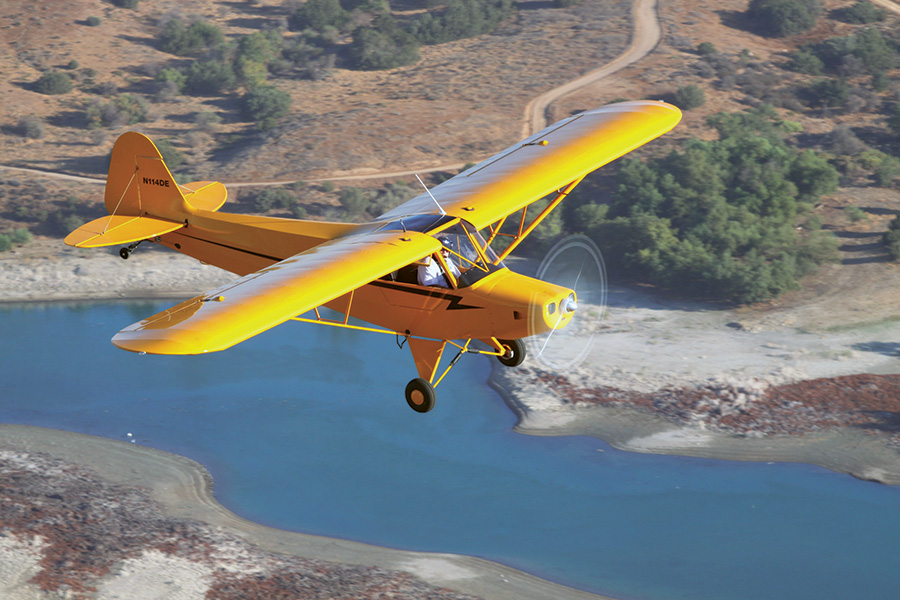 We could see the boat heading towards us, a most welcome sight, because the water was cold. I think we were on board within five minutes of ditching, but Bill estimated it to be more like ten. I think it just felt like ten to him because the cold water was really getting to him very quickly. He was otherwise in good shape with no apparent injuries, but the onset of hypothermia so quickly had me very concerned. Luckily we were out of the water and wrapped in blankets in short order. The Baywatch boat arrived within minutes to take us to Avalon, where we could get some dry clothes and get checked out at the local clinic. Everything worked about as smoothly as it possibly could. Well, except for the plane being at the bottom of the ocean.

As this drama unfolded, our friends were circling above us to make sure we got help. Once we had been picked up they flew to the airport and took the shuttle bus to town. We were sure glad to see them in Avalon. Unfortunately they all missed out on lunch that day, but they now have a pretty good story to tell as compensation.

The professionalism and thoughtful consideration of everyone we encountered that day was heartwarming and impressive. I can’t say enough good things about the L.A. County Baywatch crew, the firefighters, and deputy sheriff in Avalon. What a great bunch of people. It is nice to know that when you really get in trouble, there are some great people around to help you out.

So, what’s the takeaway from all of this drama? One, never get complacent about a water crossing, or any other flight over potentially hostile terrain, for that matter. No matter how many times you have made a trip, the next one could be the one where your engine quits. It doesn’t happen very often, but it does happen. Two, wear a life jacket when you fly over water. I had one on, but Bill had to make do with a cushion. I felt bad about that and will not let it happen again. Three, when you do have to cross a place where landing is not a good option, take the shortest route and fly high. We could have done better in both respects on this trip. There is no way to know if it would have made a difference to us, but it might have. Four, make sure someone knows where you are going and/or use flight following. We were flying with three other planes, but didn’t use flight following until we were in trouble. In this case it worked out well enough, but if we had been alone and somewhere else, it might not have. And five, be sure to do a careful preflight. I did that, but I will never know if there was some little thing that I missed that made all the difference. I don’t think so, but I think there will always be that little bit of nagging doubt.