I am going to step away from my usual maintenance stuff this month and share a little personal story. Some of you may remember from my earlier columns that my passion for aviation was sparked in the third grade when I traded a puzzle for a model airplane at the Christmas gift exchange. Ever since then, airplanes have continued to fascinate me. Seeing a Teenie Two on the cover of Mechanix Illustrated as a kid was certainly a defining moment, as up until that time I had no idea someone could really build his or her own airplane, other than a model airplane that came in a box. Wow! The flame got lit that day, and it hasn’t dimmed since. The boxes are just a little bit bigger.

By the time you read this column, many of you may already be aware that I have built a new 5000-square-foot hangar at the Atlanta Southeast Regional Airport (known as Falcon Field). I am really having fun now, helping other people who have either built their own airplane or purchased a homebuilt airplane. It’s kind of funny, in that I am at a stage of life when most people are slowing down, and just about this time last year, I was thinking about doing the same. Being involved in so many aviation activities as I am, I was thinking that perhaps I could slow down on the maintenance side a little. Some extenuating circumstances forced me to try that for a few months, and I had a fair number of my customers get upset with me. 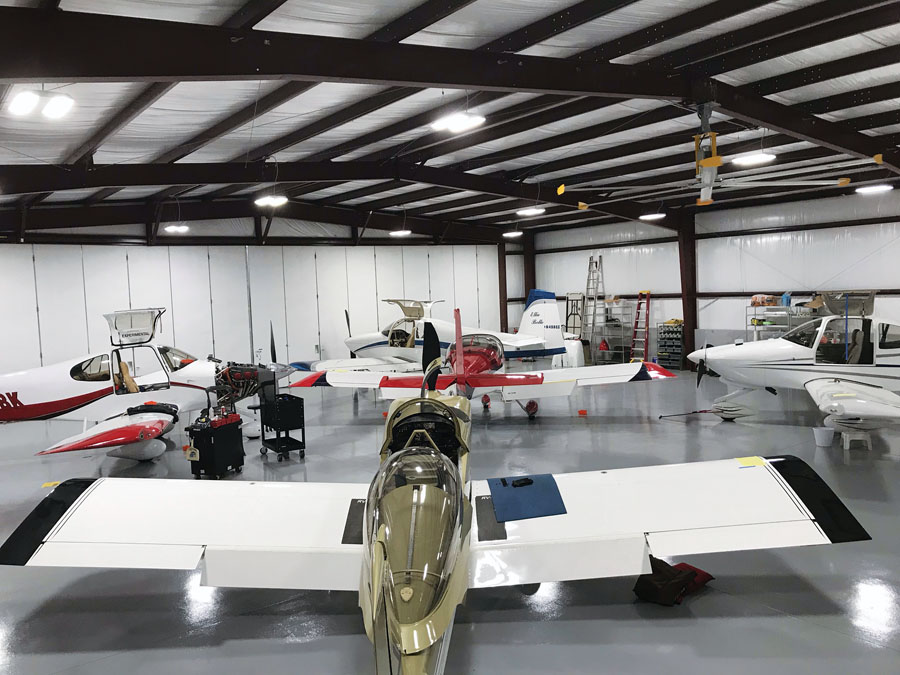 The new Base Leg Aviation hangar at Atlanta Southeast Regional Airport (Falcon Field) is full of airplanes and has provided an opportunity for my son Nick and I to work together.

Around that same time, my youngest son, Nick, came to me one day and mentioned that he thought he might enjoy life a little more if he was working with me, as he spent a lot of time during the day thinking about airplanes. It’s really not a bad day when one of your kids says they’d like to work with you, although I have to admit I was looking for the hidden camera! He started his own IT support business and is pretty good at it, and successful. I do find it interesting that we both worked in technology, but were drawn by the aviation bug. I didn’t have any success in getting him to become a licensed pilot while he was at home, although he did fly a lot with me and usually did all of the flying, even in the Stearman. He’s kind of a natural pilot, and I think it comes from all of his flying RC aircraft. I remember when I was a younger flight instructor, I noticed that those who flew RC aircraft seemed to have much better flying skills, especially when it came to landing. Nick is really good with his hands and has a natural inquisitiveness about him, which is really helpful when working on airplanes. Since he helped me rivet and build quite a few of the airplanes while he was at home, he’s no stranger to working with aviation tools. Heck, he even soloed in two of the Kitfoxes I built.

So, here we are now, one month into the new facility, and it is full of airplanes, and the situation has exceeded both of our expectations. Nick says he is excited about all of the new things he is learning. He even finally earned his private pilot license, and I felt good about finally putting forth a new student. Plus, it’s a good feeling to sign off your own child. Nick surprised everyone by making his first trip in an airplane as PIC by flying his family to our first customer appreciation/grand opening day. We had a really great turnout, and I think I have the best grand opening picture in all of RV-land, as the Falcon RV squadron put up a five-ship formation and managed to fly right over our new hangar!

However, all of that is not really what I want to share with you. There has been another “feel-good” event that has come out of this that has been over 20 years in the making. 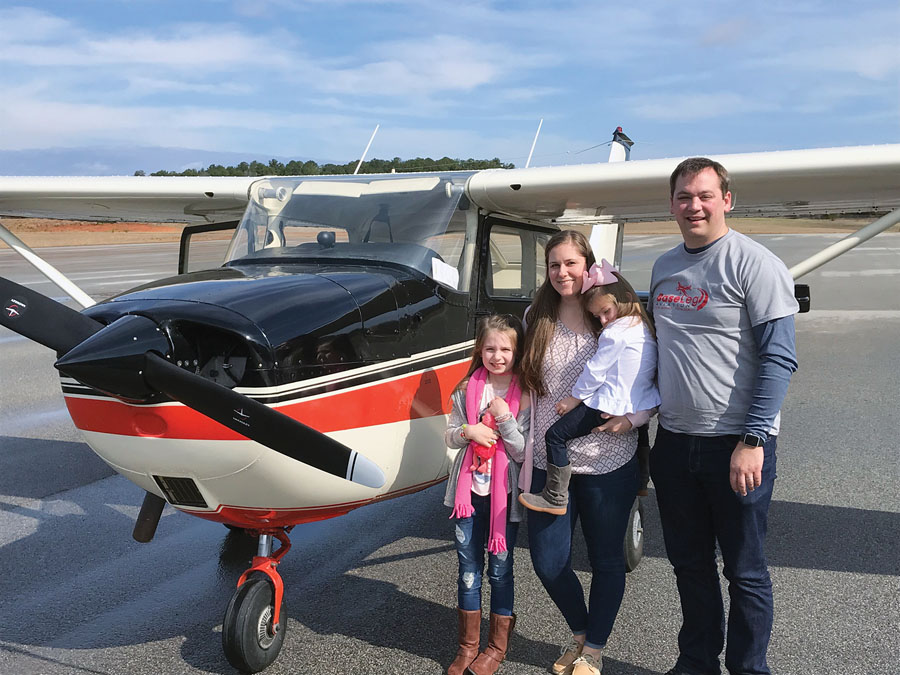 My son Nick surprised everyone by making his first flight as PIC with his family to the grand opening. His oldest daughter, Allie, was having so much fun she started making announcements over the intercom, calling herself the “second pilot.” Just maybe there is hope for her, too!

I know most of you probably feel the way I do about flying: “Why should one waste time on any other activity?” Much to the consternation of friends and family, it’s an addiction that we pilots feel obligated to share. Right?

One day over 20 years ago, I made a trip to the dentist early one morning before work. The parking lot was empty except for one lone car, which obviously was one of the “kit” cars that mortals build. After pleasantries were over and I was seated in the chair, I asked Dr. Ted Chipps if the car was his. With a beaming smile he told me that it was and that he had built it. I, just being flippant, said “what a waste of time.” Ted’s smile all but vanished, and I was sure the drill was going to slip as well! When he asked what I meant, I recommended that we get together on Saturday and trade rides. I’m pretty sure I mentioned that I lived in an airpark and built my own airplane.

So on Saturday Ted gave me a ride in his car. Oh, it was powerful, and he was certainly proud of it, but it did nothing for me. However, I did imagine how my kids must have felt growing up, as they would always be pointing out some sports car on the road while we were driving and asked if I had seen it. Mostly my answers were “no, sorry.” (One day on my older son’s 16th birthday, my boss at HP told me to take his Porsche home and take him for a ride in it. My wife tells me that as I came around the corner on the way home, the kids noticed the car, but refused to believe I was driving it!). 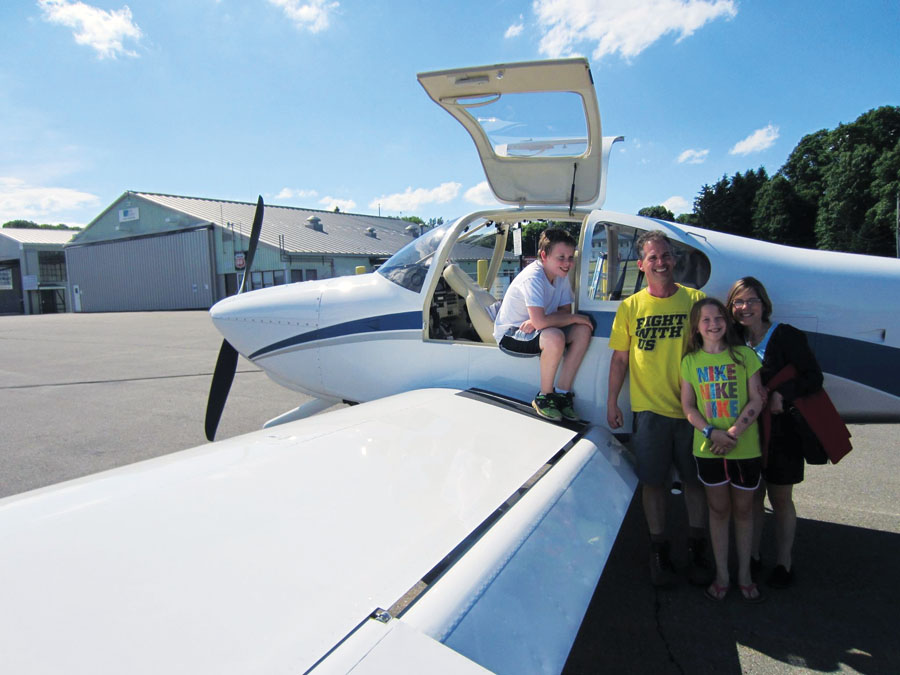 Ted Chipps is featured in the story as a pilot-friend and RV-10 owner, 20 years in the making! You just never know how one comment about aviation can have an impact on someone.

Back to Ted. Now it was my turn to take him flying in my RV-6, that I built. You should have seen the amazement I saw in Ted. After we landed I told Carol that I think I may have lit a flame in Ted. Sure enough, the next thing I know, Ted is out training for his pilot license. Then he sells the car and buys a Piper Arrow. Next he buys a really nice Mooney, and then he flies his kids down to my place. Big mistake. He now sees my RV-10. Guess what? Ted now wants an RV-10. Of course, being a very successful dentist, with two kids, he has no time to build it. So he buys one, and I have been taking care of it for him ever since. As luck would have it, Ted was the very first customer in our new shop, as his condition inspection was due. It wasn’t planned; it just happened that way. But I thought it was kind of neat. Of course, he has also noticed a number of upgrades that are on my RV-10 and not his, such as lights and touchscreens, so he now has those, too. By the way, Ted now has an instrument rating and a commercial pilot certificate, and is even working on his flight instructor certificate. It seems his daughter is very interested in learning to fly. How cool is that?

The moral of the story is that you never know the impact you might have upon someone just by sharing an airplane ride. I know of five Young Eagles that I have taken on their first ride, and they have told me they went on to achieve their pilot license. Having done over 300 Young Eagles, I certainly hope there are more, but it is good to know some went on. With any luck, some of them may even have a “Ted story” in their future. 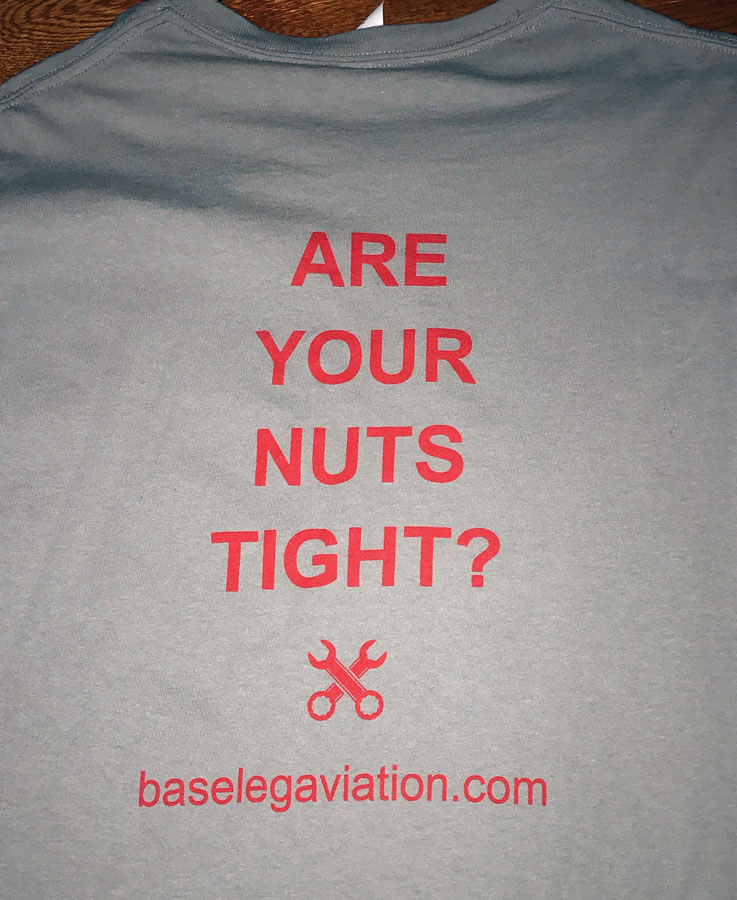 Many of you have read the countless articles I have written regarding loose jam nuts on airplanes. I am convinced it is some kind of plague! I figured what better time than now to launch a tongue-in-cheek campaign.

By now, our new company motto has probably been noticed, especially since we gave out lots of free T-shirts on opening day. I’m on the warpath to eliminate loose jam nuts, as I keep finding them on just about every airplane I inspect. I’m hoping the new “tongue-in-cheek” motto will help spread the word. If you have time, fly into KFFC and stop by the new hangar. You could get one of the T-shirts!

Paul Dye - November 11, 2020
5
If your aircraft turns in to a smoldering pile of ash and your gear happens to be in the baggage compartment, well…what you’ve got is what you’ve got.